Antisemitic Cartoons on the Mideast Crisis

In recent days, political cartoons in Middle Eastern publications have understandably focused extensive attention on the conflict between Israel and the Palestinians.  Unsurprisingly, some of these cartoons crossed the line from legitimate political satire to trafficking in antisemitic imagery and messages.

Common anti-Jewish tropes applied to Israel’s conduct by some of these cartoons included depictions of Jews being bloodthirsty, monstrous, sub-human.  Other cartoons presented Israel’s conduct as delighting in harming children, being filthy or carrying disease, or being identical to Nazis, all classic antisemitic tropes. 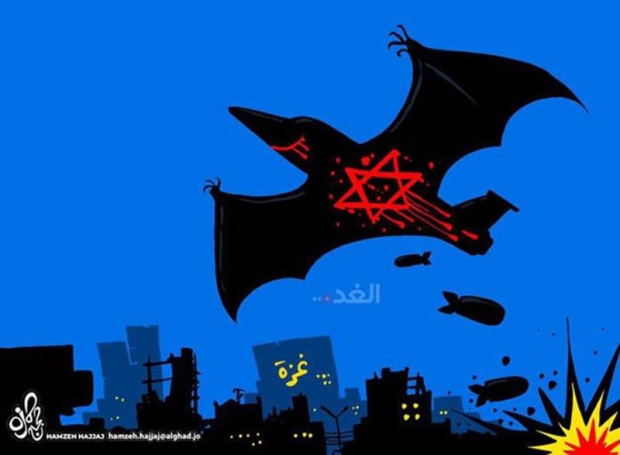 Arabic text in yellow says “Gaza”.  Text in the middle says al-Ghad, the name of the newspaper.
Al-Ghad Newspaper (Jordan), May 16, 2021. 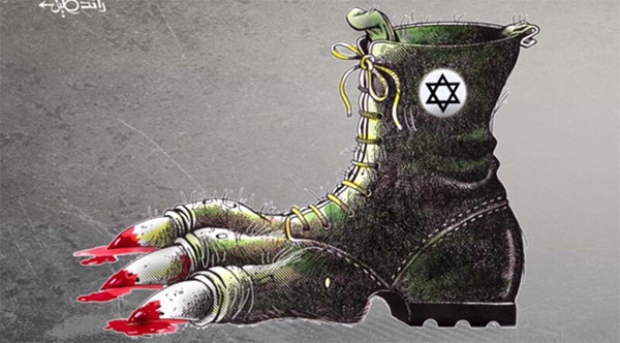 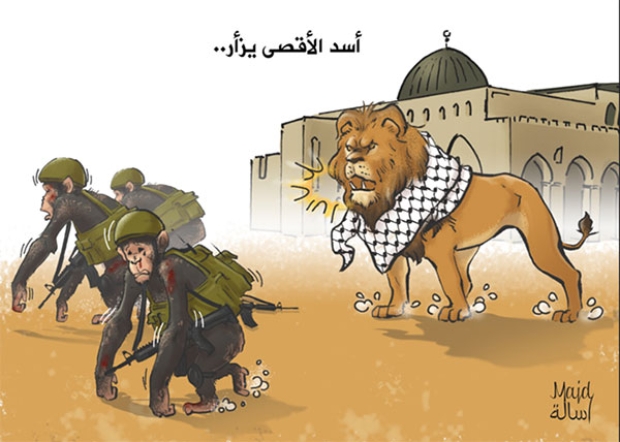 Arabic translates to “the lion of al-Aqsa roars.”  The depiction of Israeli security forces as apes appears to be an allusion to a fundamentalist derogatory slur that Jews are descendants of apes.
Al-Resalah Newspaper (Gaza), May 10, 2021. 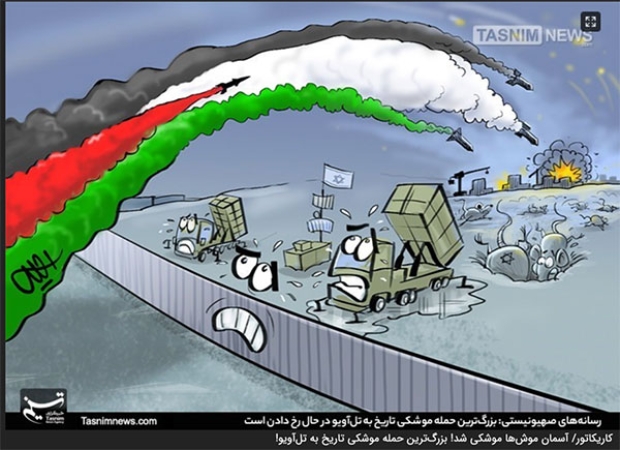 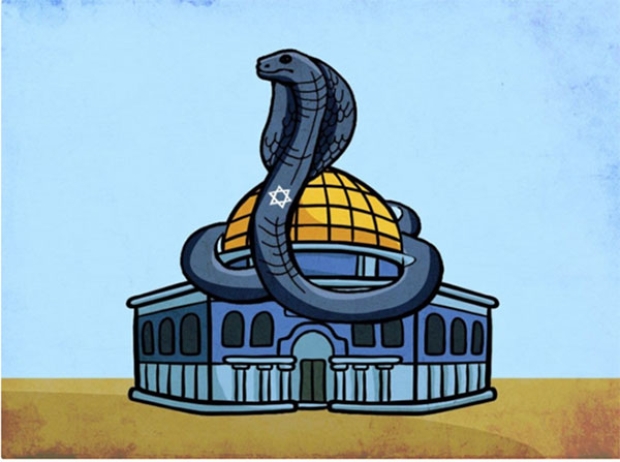 International Union of Virtual Media (a media site designated in 2020 by the U.S. Treasury Department “for being owned or controlled” by Iran’s IRGC Quds Force), May 8, 2021. 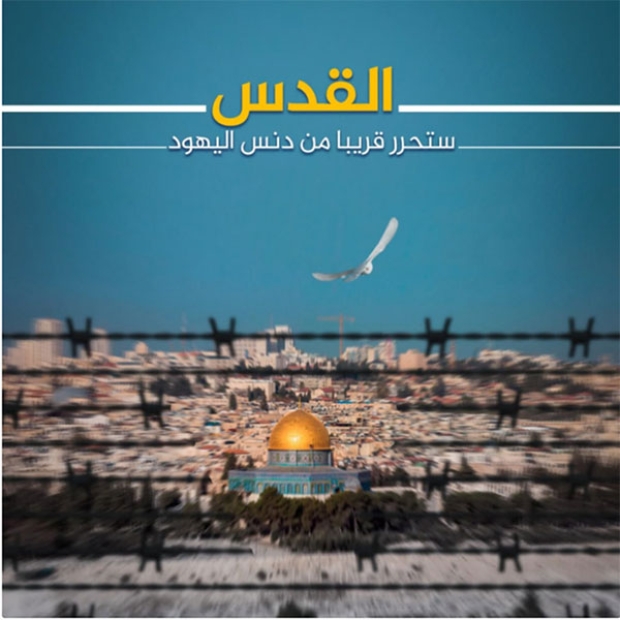 Text translates from Arabic into “Jerusalem will be liberated soon from the filth of the Jews”.
Infographic from International Union of Virtual Media (a media site designated in 2020 by the U.S. Treasury Department “for being owned or controlled” by Iran’s IRGC Quds Force), May 10, 2021. 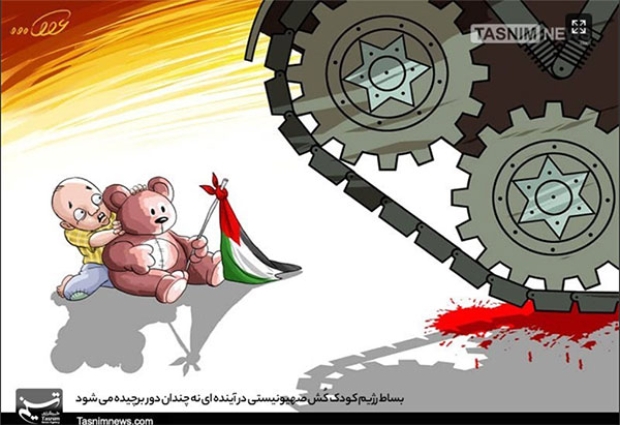 “The basis of the Zionist child-killing regime will be dismantled in the near future”
Tasnim News Agency (Iran), May, 12, 2021. 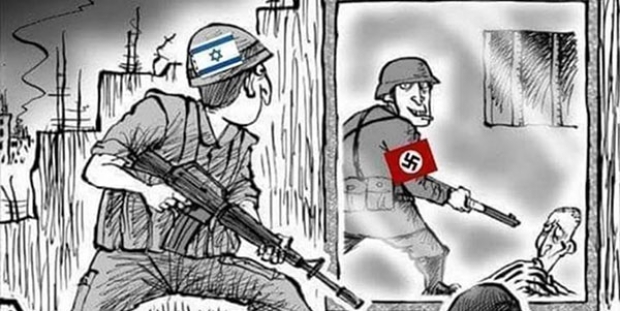 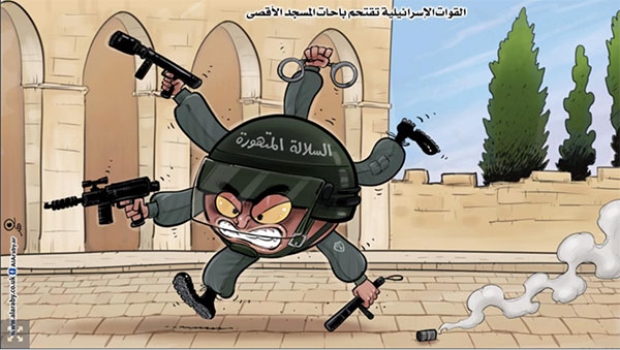 Arabic text on top translates to “Israeli forces storm the courtyards of the al-Aqsa Mosque,” and text on the figure translates to “the reckless strain,” and is a play on words in Arabic on a similarly spelled phrase for “the mutated strain” of the coronavirus. 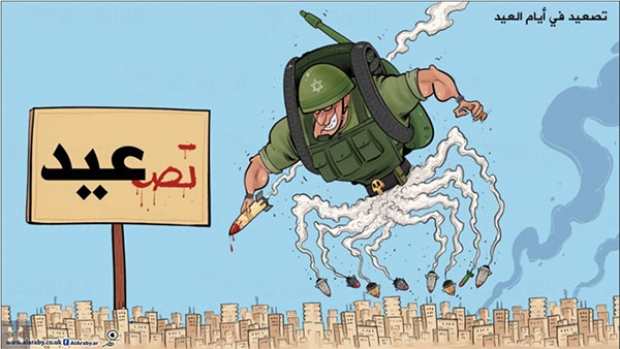 Arabic on top right translates to “escalation on the days of Eid”.  Text on the left in black says “Eid” but instead spells “escalation” once the red letters in blood are added to the sign. The Israeli figure is depicted as delighting in violence and also is dehumanized as some sort of insect, octopus, or monster.
Al-Araby al-Jadeed (UK/Qatar), May 15, 2021. 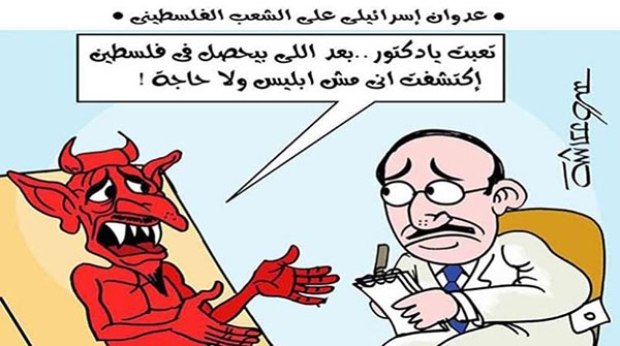 Arabic caption above the cartoon translates to “The Israeli aggression on the Palestinian people”.  The Arabic in the speech bubble translates to “I am tired, Doctor.. After what’s happening in Palestine, I discovered I am not Satan or anything!”
Al-Wafd [Party] News Portal (Egypt), May 19, 2021 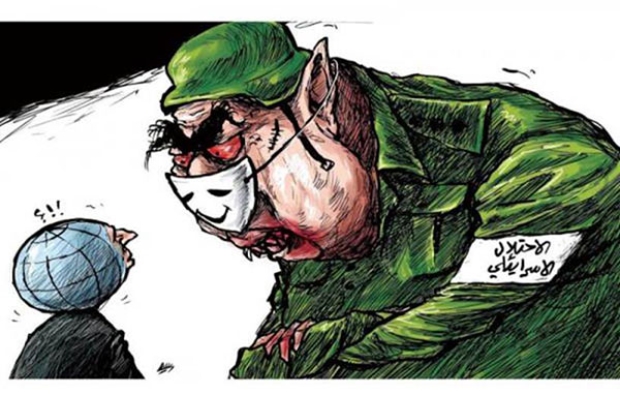 Arabic translates to “The Israeli occupation”
Ash-Sharq al-Awsat (UK/Saudi), May 19, 2021. 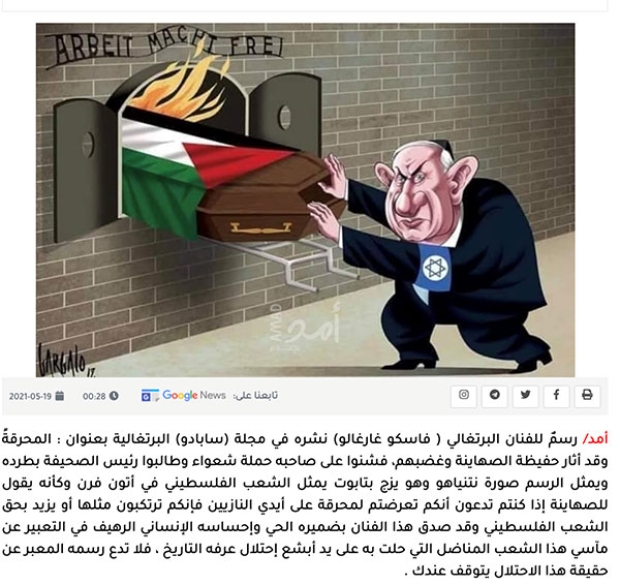 A cartoon from 2019 that was just republished on the Palestinian news site Amad News, which is registered in Egypt and aligned with the UAE-based Palestinian leader Mohammed Dahlan.

The Arabic caption below the republished cartoon translates as follows: “Amad [News]: A drawing by the Portuguese artist Vasco Gargalo, printed in the Portuguese magazine Sabado with the title The Holocaust, stirred up the Zionists’ grudge and anger, so they launched a vehement campaign against its creator and demanded the paper’s editor dismiss him.  The drawing depicts an image of Netanyahu shoving a coffin representing the Palestinian people into a furnace. It is as if it is telling the Zionists that if they were claiming they were subjected to a Holocaust at the hands of the Nazis, then they are committing something like it or greater against the right of the Palestinian people. This artist, with his living conscience and his tender humanitarian sense, had trusted in expressing the tragedies which befell this struggling people at the hand of the most repugnant occupation known by history, so don’t let his drawing expressing the truth of this occupation stop with you.”