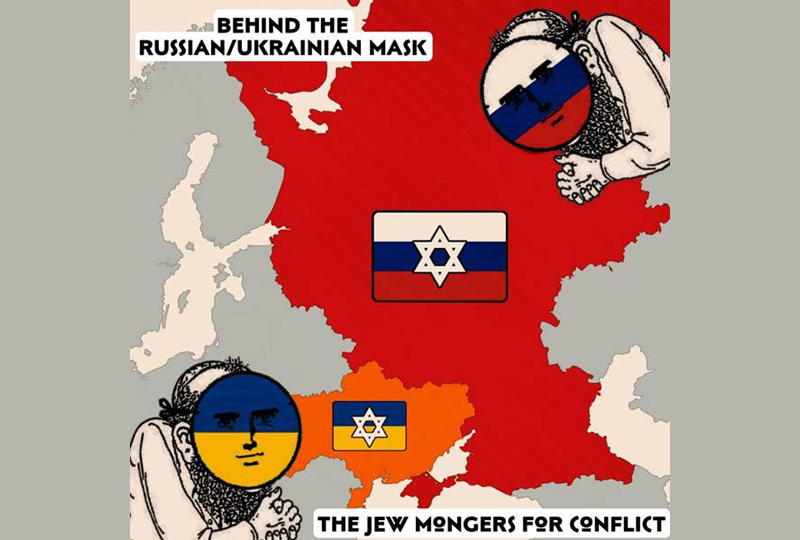 Since Russia’s invasion of Ukraine on February 24, 2022, extremists and antisemites across the ideological spectrum have used the war as fodder for promoting antisemitic conspiracy theories. Emanating from classic antisemites and white supremacists, as well as QAnon influencers and Proud Boys acolytes, classic tropes of Jewish power, financial control and “abuse” of the Holocaust narrative abound online. In just a few short weeks, tens of thousands of social media users have been exposed to these dangerous lies.

Some allege that the war itself is orchestrated by Jews for both financial control and global prowess. Others refer to the “Khazarian Mafia” or the “Khazarian invasion” to justify and even celebrate Russia’s invasion. This conspiracy alludes to the belief that modern Eastern European Jewry descended from a people known as the Khazars, who allegedly converted to Judaism in the eighth century and lived in present-day Ukraine. Believers claim Putin’s incursion into Ukraine was a means to help the country counter/dispel an invasion of “Khazar Jews.”

Anti-Zionist activists have also engaged in conspiratorial rhetoric, alleging Israel and Zionists are intentionally capitalizing on this crisis to fuel their own goals.

“Street Evangelist” and antisemitic provocateur Brother Nathanael went on an antisemitic rant invoking the age-old Blood Libel conspiracy, which claims that Jews murder non-Jews and use their blood in religious rituals. In a video titled “Bloody Passover in Ukraine,” which has been viewed more than 22,000 times, Brother Nathanael states that the war in Ukraine is based on Jews’ “lust for murder and blood,” and “the blood of Ukrainian, American and European NATO soldiers” would have “curative power for Jewry” that “puts the Jews on top.” Later in the video, Brother Nathanael names Jews who work in the Biden Administration to claim that the “Jewish blood ritual is the center of U.S. foreign policy” for “Jew-led America,” and that the war is being fought because “only the dried blood of Orthodox Christian Russian soldiers will nourish the blood cult of yet another bloody Passover.” 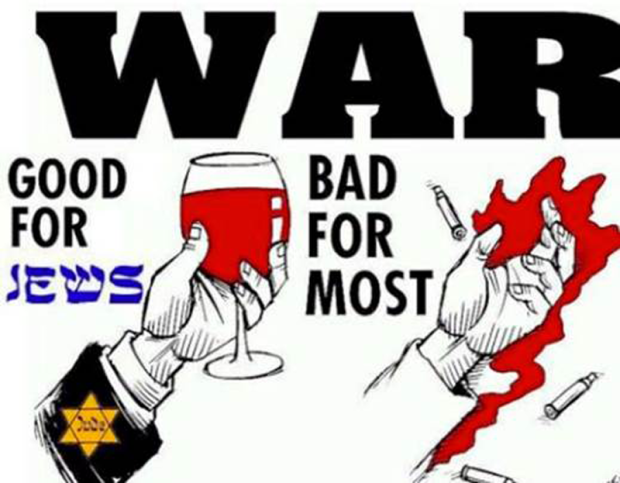 Another video on Brother Nathanael’s BitChute channel, with more than 22,000 views, links the war in Ukraine to the antisemitic conspiracy theory of Jewish financial control, referring to the U.S. efforts to sanction’ Russia as the work of “the Rothschild U.S. Jewish Fed [sic],” and claiming that “Ukraine is just a pawn in the Jewish game” to strike against Russia.

E. Michael Jones, a longtime antisemitic Catholic writer, also promoted the conspiracy theory of Jewish financial control, among others, in a video posted to his BitChute channel on March 1, 2022. Discussing the Ukraine crisis, Jones used tropes of Jewish power, financial control, and claimed that Jews use the “Holocaust narrative” to “do whatever they want.” He said, “...there’s a category of reality out there called the Jew.......they have enormous power and basically, they can do whatever they want, and they’ve been doing whatever they want through the sanctions office of the United States Treasury.” This video was viewed more than 6,000 times, and a link to the video was shared via the Twitter page of Jones’ magazine, Culture Wars.

TruNews is a fundamentalist Christian streaming news and opinion platform that regularly features antisemitic and anti-Zionist content, often linking current events to antisemitic conspiracy theories. TruNews’ host, Rick Wiles, and his co-hosts use “Zionist” and “Jew” interchangeably, and refer to “Zionist control” of America as the cause of the country’s “downfall.” Of the invasion of Ukraine, Wiles claims that Zionists are driving the world to war for profit. In a February 22, 2022 stream on the TruNews website, Wiles alleges that America no longer has “responsible leaders in this country that would speak against war” because of the threat of censorship from “Zionists with power.”

Like TruNews, Adam Green uses his show, “Know More News,” to invoke the antisemitic conspiracy theory of Jewish control; Green likewise uses “Zionist” and “Jew” interchangeably. In a March 1, 2022, stream on his BitChute channel, Green begins his discussion of the war in Ukraine by sharing pictures of President Zelensky and Vladimir Putin wearing yarmulkes, Jewish ritual head coverings, and the caption “Choose your side goyim.” Keeping those images onscreen, Green calls out both heads of state for visiting Israel’s Western Wall and for allegedly meetings with leaders of the Orthodox Jewish Chabad movement, whom he refers to as “the supremacists, lunatic chabad lubavitchers.” Green continued, “...it's almost like there's a group behind all of this that's just orchestrating more world wars where people destroy each other, like it calls for in their prophecies,” later clarifying, “The end times rabbis literally want the whole world to wage war against them” and “we've got Zionist fanatics prophecy, hypnotized, useful idiots and agents promoting world war so they can play out their prophecy, engineering it from behind the scenes of all sides.” 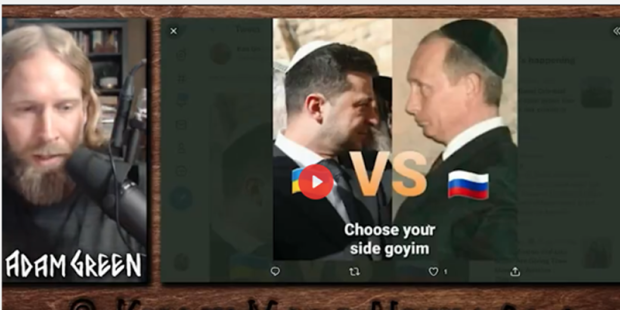 As noted in the Center on Extremism’s piece on extremist reactions to Ukraine, white supremacists have been vocal during this conflict, including espousing antisemitic rhetoric and conspiracies that Jews are orchestrating and funding this war as a means of killing white men on both sides of the conflict.

The official Telegram channel for the white supremacist “White Lives Matter” movement shared their take on the war with their 11,000-plus subscribers, writing that both sides are controlled by Jews: “jewish [sic] led Ukraine & NATO and the jewish led Russia” were part of “the international clique of anti-Whites.” 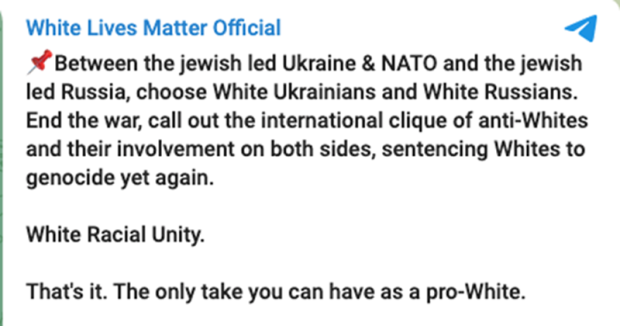 White supremacist influencer “Father Orion” shared his antisemitic views on the conflict on his social media outlets. The founder and leader of the Occidental Templars, an Aryan neo-Nazi group, Father Orion also run the Church of Aryanity Telegram channel and hosts his own podcast “The Aryanity Omnicast.” In posts on both his Gab profile and Telegram channels, he asserted that “if you choose a side in a brother war led by Jews you are literally a traitor...” He also shared multiple antisemitic memes.

Another post, shared on the Church of Aryanity’s Telegram channel and viewed more than 4700 times, was captioned: "The innocent people of Ukraine and Russia are caught in a zog war from both sides. Whites lose, jews win. [sic]” “ZOG” stands for Zionist Occupied Government, an antisemitic conspiracy that Jews control the government. 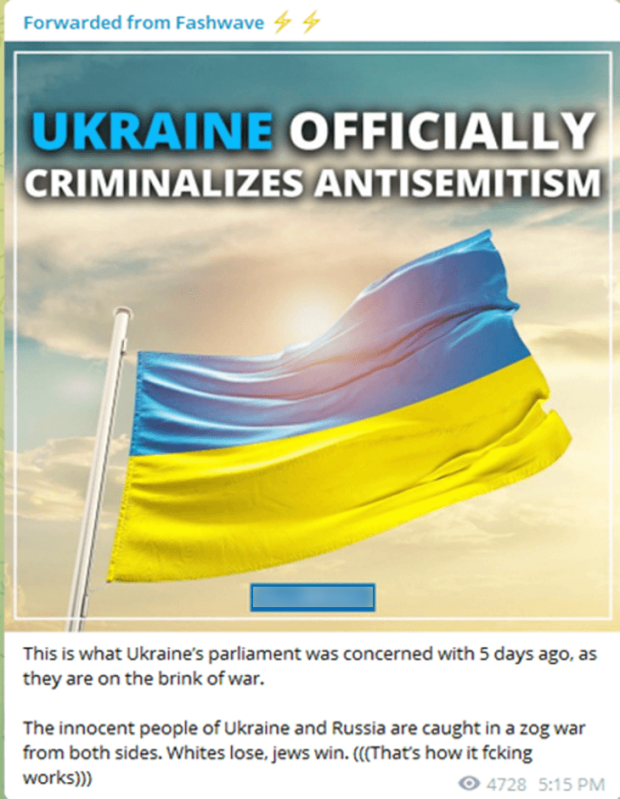 Sean Sweat, a white supremacist with a large online following, echoed the sentiment that the ”Jewish elite” orchestrated the war in Ukraine as a mechanism for white men to kill each other, referred to as a ”brother war.” In a post shared with his nearly Gab 25,000 followers, Sweat -- a.k.a TexasVet -- shared an image indicating that Russia, Ukraine and NATO are all Jewish entities. 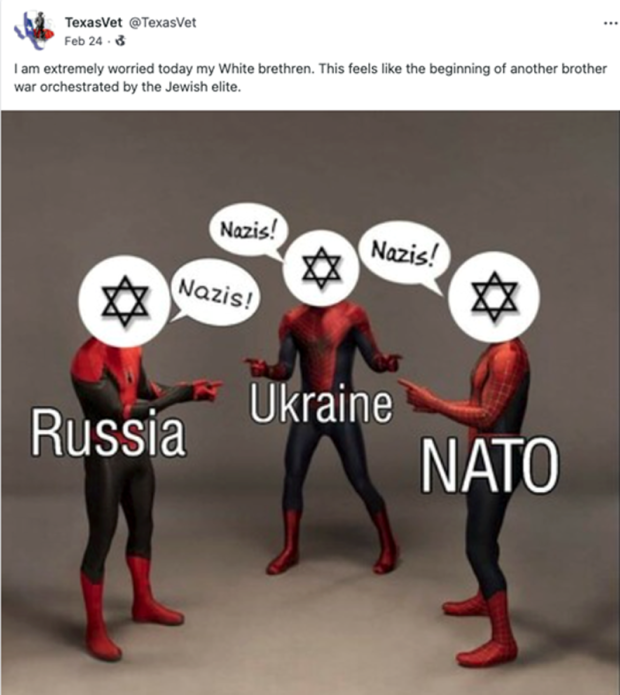 Antisemitic rhetoric is also prevalent on two white supremacist, Proud Boys-offshoot Telegram channels. In a channel with over 3,000 subscribers, run by a self-described “high-ranking" Proud Boy who promotes Nazism, a post called for white men to “collectivize and remove jews [sic] from power in our nations.” 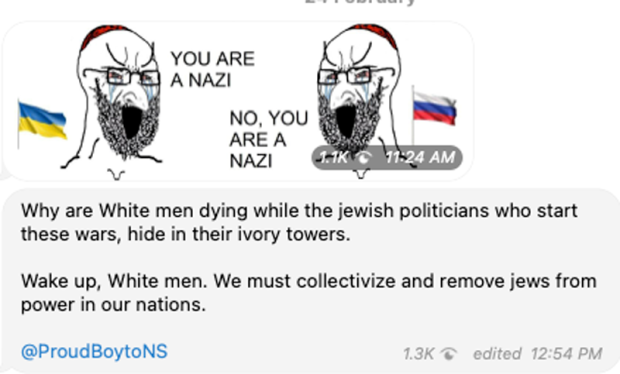 The Western Chauvinist, an overtly white supremacist offshoot of the Proud Boys’ Telegram channel with more than 44,000 followers, posted a number of antisemitic conspiracies referring to the war in Ukraine. In a post viewed nearly 10,000 times, someone claims, “Anyone paying even a small amount of attention can see that the Jew tribe is behind this.” Another post with more than 6,600 views reads, “At this point Russia vs Ukraine is so convoluted that you can't tell who is Jewing who and it's probably because they're both Jewing you.” The administrators of the channel also set up a poll for users to vote on “Who is going to gain the most from this war.” Seventy-eight percent of respondents selected “The Jews” from a list of five choices. 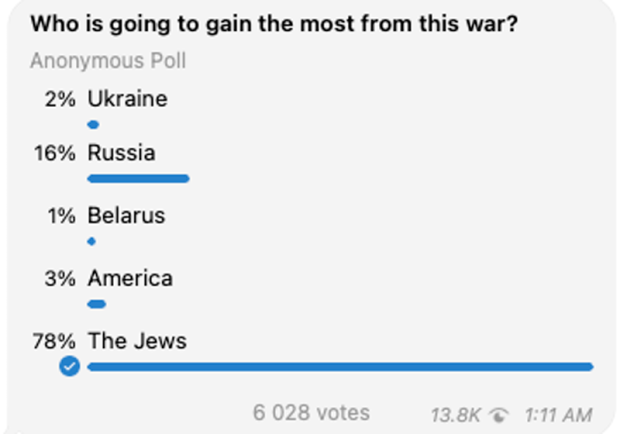 QAnon social media accounts have also posted antisemitic conspiratorial content since the Russian invasion began. QAnon John (a.k.a John Sabal) is a popular QAnon influencer who runs a Telegram channel with more than 81,000 members. Over the past few months, he has shared antisemitic content several times, including a post claiming that “Ukraine is the home base and last bastion of the Khazarian Mafia who happens to control the world’s deep state.”

Influencer Ann Vandersteel also promoted the Khazarian myth to her 37,000-plus Telegram channel subscribers, sharing a downloadable document describing the alleged Khazarian Mafia (KM), which reads, in part: "The Rothschild KM created a master plan to control all of Judaism and mind-kontrol Judaics...and gained control over the banking and Wall Street professions in general, Congress, the major mass media; along with most wealth and economic means of success."

In the Telegram channel run by GhostEzra, one of the most popular QAnon influencers with more than 294K subscribers, users shared antisemitic rhetoric, with one user writing, “Now don’t forget who really controls Russia, Ukraine, and American and every nation in the world. It’s the Jews,” and alleging that Jews “love” war because they are profiting from the military spending.

Anti-Zionist activists have been using the war against Ukraine to draw parallels to the Israeli-Palestinian conflict, with some claiming that Israel and Zionists are supporting the war so they can bring Ukrainian Jewish refugees to Israel. Ohio-based anti-Israel activist Abbas Hamideh, who has expressed support for the Iranian regime and Hezbollah, tweeted, “The Criminal Zionist occupation of PALESTINE supports Neo-Nazis in the #Ukraine so they can cause massive flight of Jews fleeing for their lives & then bringing them to Occupied PALESTINE in order to “save” them.” I. Em Cohen, another anti-Zionist writer, echoed Hamideh’s sentiments in a tweet claiming that Zionists are using the situation in Ukraine “as an excuse to build more zionist [sic] settlements in Palestine.”

Others are criticizing Israel for taking in what they call “white supremacist” refugees. In multiple tweets, writer, novelist and anti-Israel activist Susan Abulhawa referred to Ukrainians who are moving to or applying to immigrate to Israel as “white supremacist colonizers.”