Antisemitism and Anti-Transgender-Hate in Attacks on Gender-Affirming Healthcare 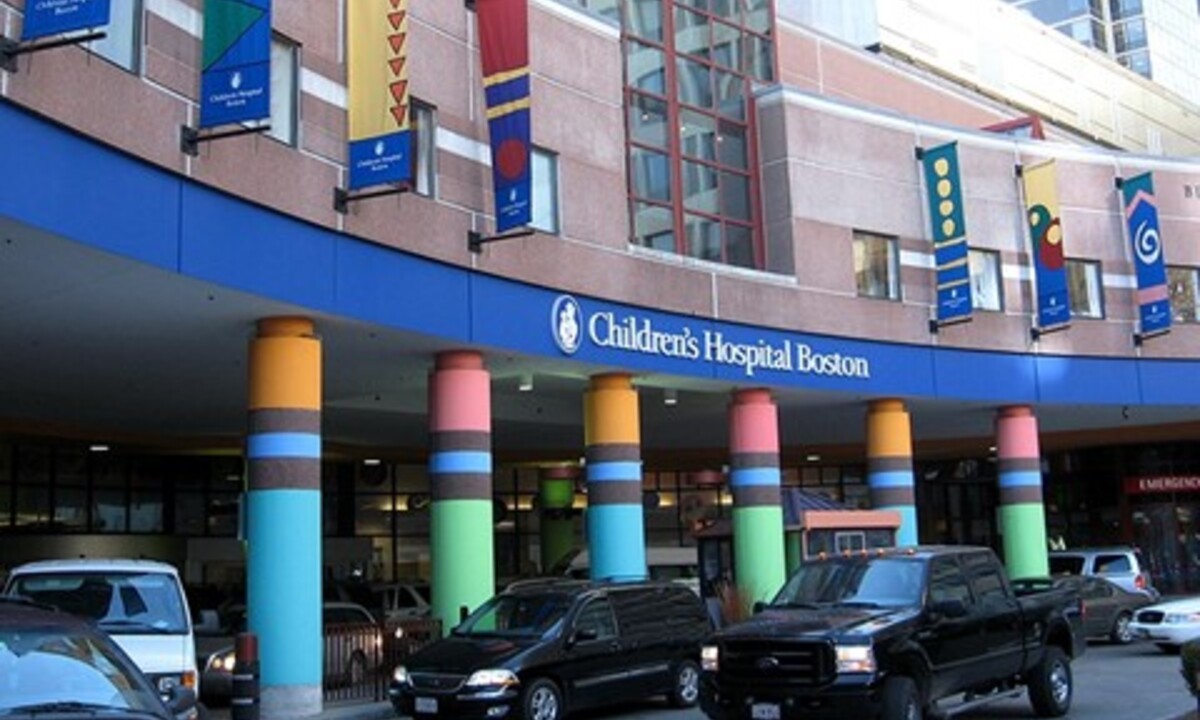 Antisemitism in the Abortion Debate

Update: In late August 2022, Boston Children’s Hospital received a bomb threat via phone call, forcing the hospital and the surrounding area to go on lockdown. A bomb squad was unable to locate any explosive device and determined the threat to be a hoax. On September 15, 2022, law enforcement officials announced that they arrested the suspect responsible: 37-year-old Catherine Leavy of Westfield, MA, who referred to hospital employees as “sickos” during her threatening phone call. Officials have determined the incident to be one of many harassment events connected to widespread criticism and conspiracy theories about BCH’s gender-affirming care services. An FBI spokesperson told reporters, “…the hospital has received dozens of hoax threats, including harassing phone calls and emails, individual death threats and threats of mass-casualty attacks.”

Hospitals that provide medical and psychological care to transgender youth have recently seen their promotional videos weaponized by far-right conspiracy theorists, which has resulted in hate speech and harassment against providers. Some of this rhetoric includes antisemitism – highlighting the deeply-rooted relationship between anti-transgender and antisemitic conspiracy theories.

Beginning the first week of August 2022, YouTube links of Boston Children’s Hospital (BCH) promotional videos started circulating on Twitter, garnering high levels of engagement. Some of the BCH content explained how young people may exhibit signs of gender dysphoria,  a conflict between the gender with which an individual identifies and the sex which they were assigned at birth. Other videos discussed surgical and non-surgical methods for helping people feel more comfortable with their gender. The tweet below, which announces, “Hysterectomies at Boston CHILDREN’S hospital,” appears to be one of the earliest sources of amplification:

Tweets containing links to the hospital videos were posted primarily by those who voiced criticism of medical transition for transgender youth. While the videos were eventually made private on YouTube, they had already been archived by users who would upload the videos to Twitter themselves (without using a YouTube hyperlink).

The topic started trending after the content was featured on several high-profile right-wing platforms, including on August 10, 2022 by the conspiratorial and conservative publication The Post Millennial. On August 11, the BCH videos were shared on Twitter by Libs of TikTok, with a caption claiming the hospital was performing hysterectomies on “young girls.” 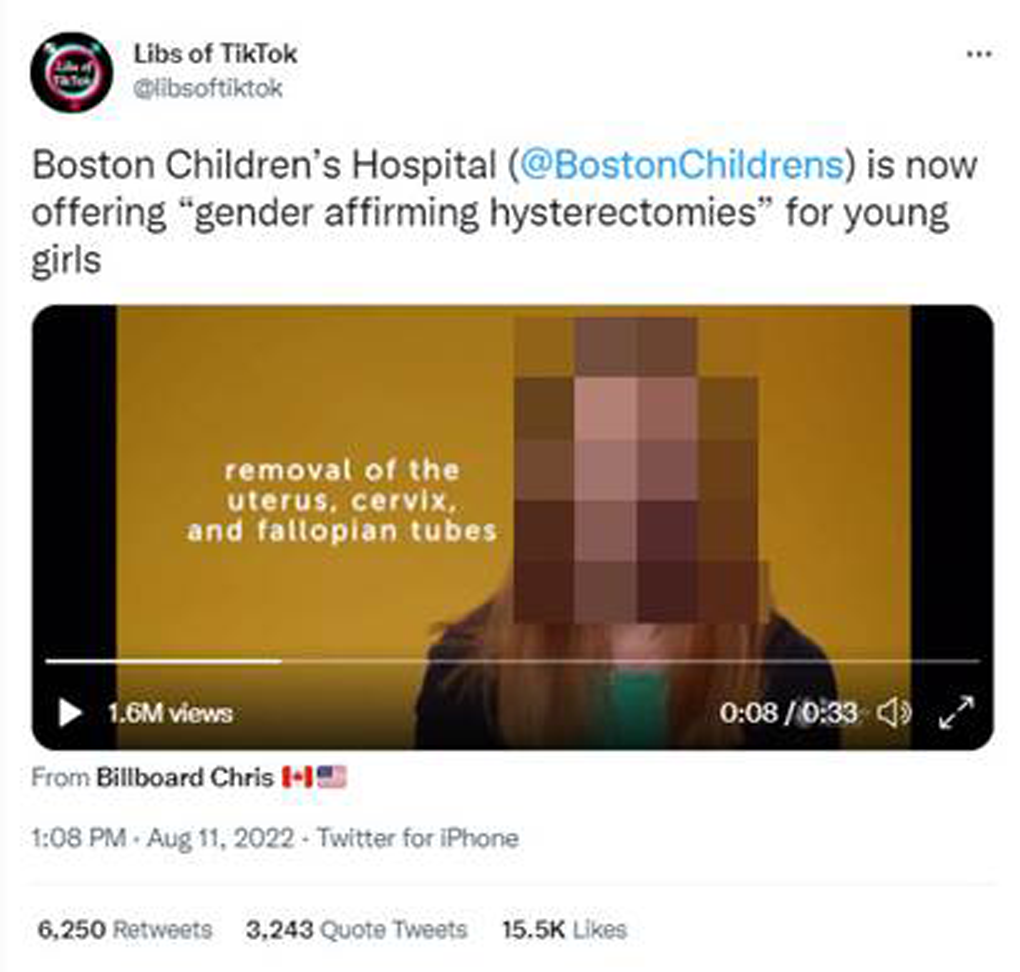 Responses to the original video, which explains what happens in a gender-affirming hysterectomy, were scathing – and mostly rooted in a misunderstanding of what the video described as well as false accusations that doctors are performing these surgeries on young children. Politifact and USA Today published fact checks about the video confirming that individuals must be 18 or older to receive a gender-affirming hysterectomy. BCH released a statement on August 16 clarifying the age minimum and protocols for this procedure. They also expressed concern about the threatening phone calls, emails and online activity they had received since the video was released.

As the vitriol against BCH mounted, additional right-wing figures like Matt Walsh began sharing videos from other hospitals that promote their gender-affirming services, including Phoenix Children’s Hospital, Children’s Hospital of Pittsburgh and more. On August 18, Libs of TikTok retweeted a video posted by former Tennessee congressional candidate Robby Starbuck featuring a doctor at Yale’s Pediatric Gender Program discussing how their program helps children who may be exploring their gender identity. Hate and harassment targeting the doctor and hospital quickly followed. 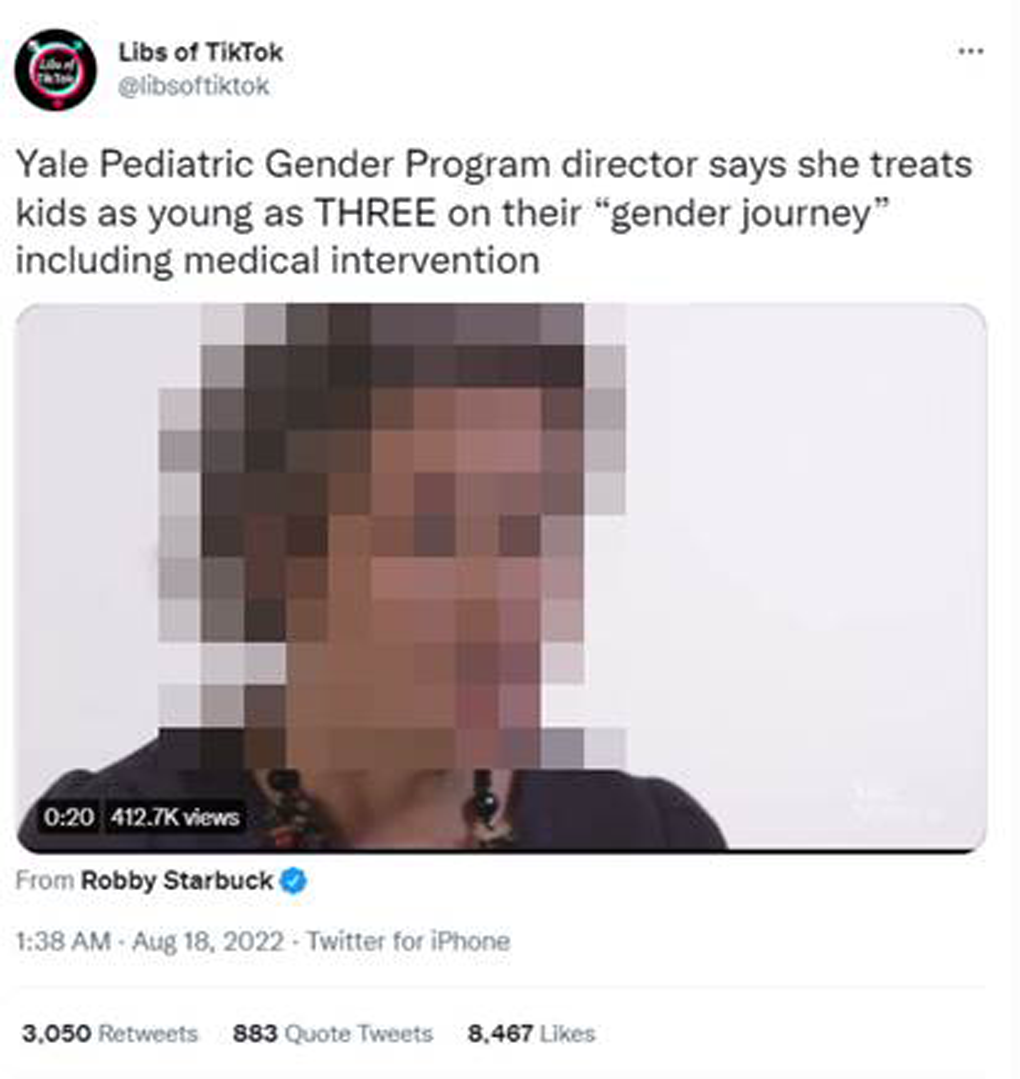 More than a week after the initial BCH videos went viral, the threats and narratives continued to gain traction on mainstream platforms and media sources. On August 18, 2022, Tucker Carlson featured the videos during his show, falsely stating that gender-affirming care is "the sexual mutilation of children.” 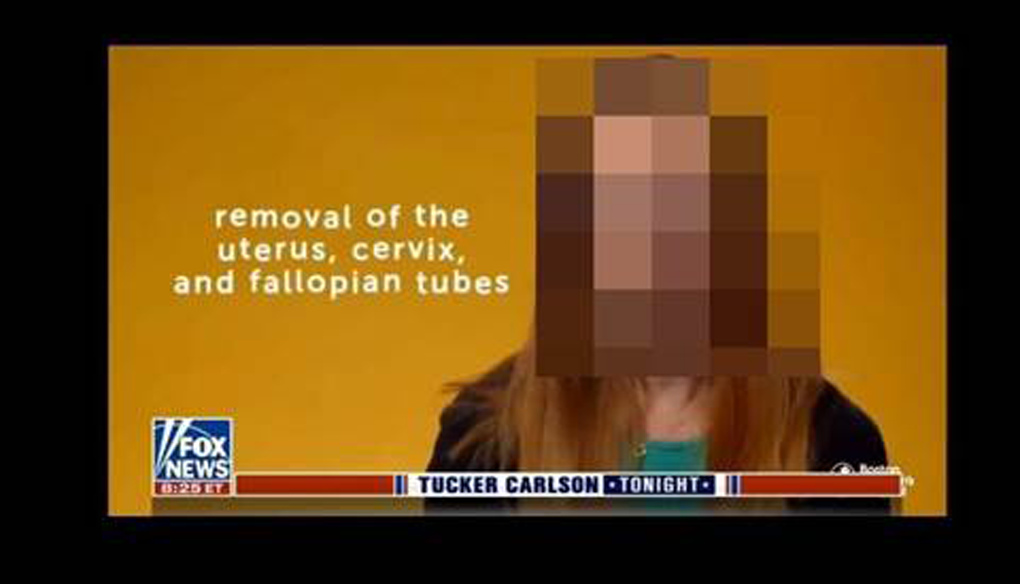 That night on Carlson’s program, far-right conspiracy theorist and Congresswoman Marjorie Taylor Greene (R-GA) announced her new effort to criminalize youth gender-affirming procedures such as puberty blockers, which she refers to as "child abuse." 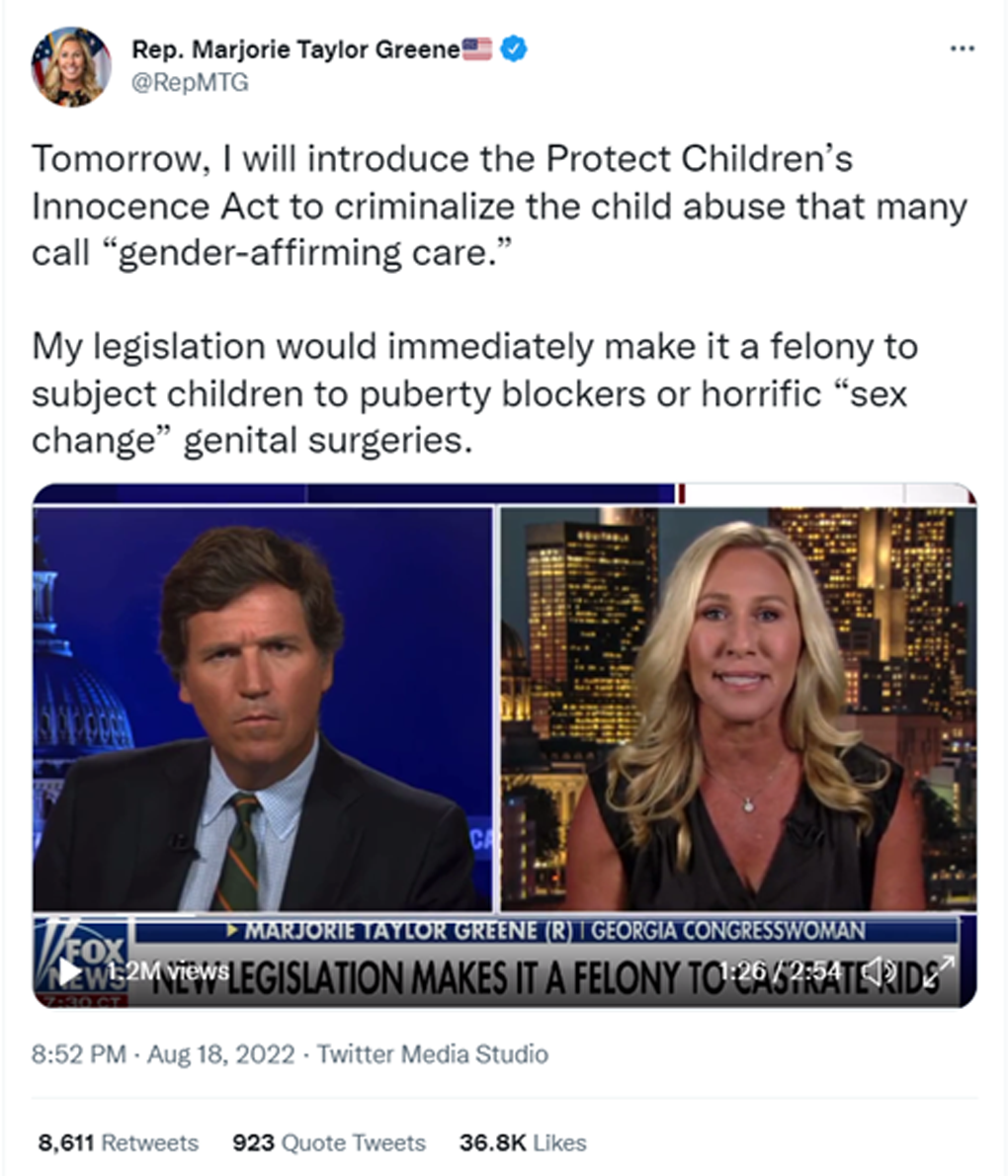 A common denominator soon emerged in the rhetoric targeting these hospitals and providers: blatant antisemitism woven into conspiratorial and anti-transgender sentiments.

The overlap of anti-transgender hate and antisemitism is not new, but it is increasingly evident in the white supremacist and neo-Nazi circles who demonize LGBTQ+ communities. The false “connection” is based on the unfounded claim that the so-called “Jewish agenda” is predicated on the indoctrination and sexualization of children – in this case, by way of medical experimentation, genital mutilation and population control.

Interestingly, this recent campaign is not the first time Boston Children’s Hospital has been targeted online with hate and antisemitism for providing gender-affirming services. In fact, the hospital was at the center of early online discourse opposing these services for youth. This is largely due to the work of Dr. Norman Spack, a pediatric endocrinologist who founded the Gender Management Service Clinic at BCH in 2007, spearheaded a program for hormone replacement therapy, and whose work and advocacy has been critical for trans youth who wish to medically delay puberty.

Antisemitic discourse about Dr. Spack and his program emerged online shortly after his clinic opened in 2007. On neo-Nazi and white supremacist forums such as Stormfront and Vanguard News Network, posts from 2008 highlight users' opposition to gender-affirming therapies while referencing Dr. Spack: “Are you surprised it’s a JEW?” 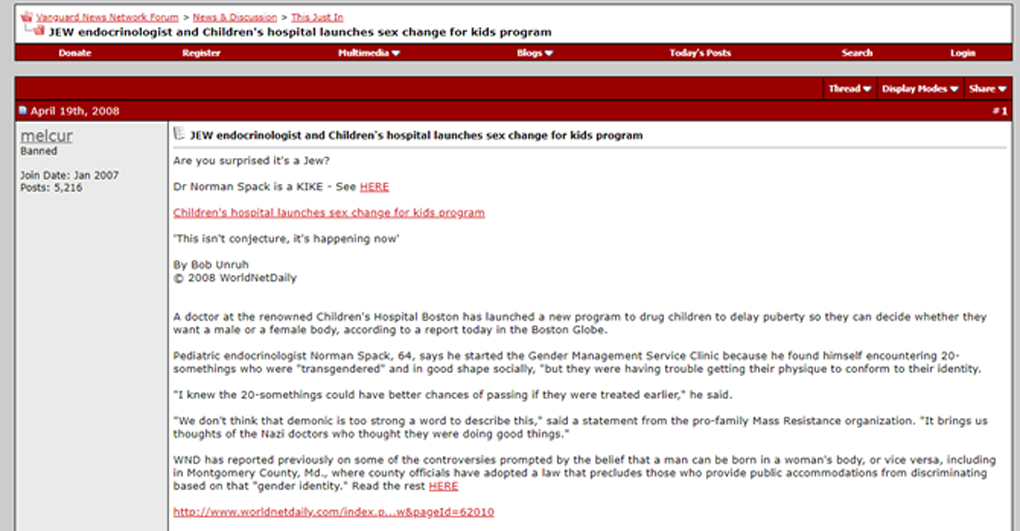 Comments included a range of slurs and violent ideation, with one user stating: “The jews must go. The jews must die [sic].”

While there is no evidence that the longstanding vitriol against Dr. Spack has informed the recent hate speech against BCH, the current rhetoric employs similar conspiratorial and antisemitic tropes. After Twitter users posted pictures of the doctor who spoke in the BCH video about the gender-affirming hysterectomy process, some critical responses immediately labeled her as Jewish, writing “Jewby jewby jew,” and “That’s a Jew.” 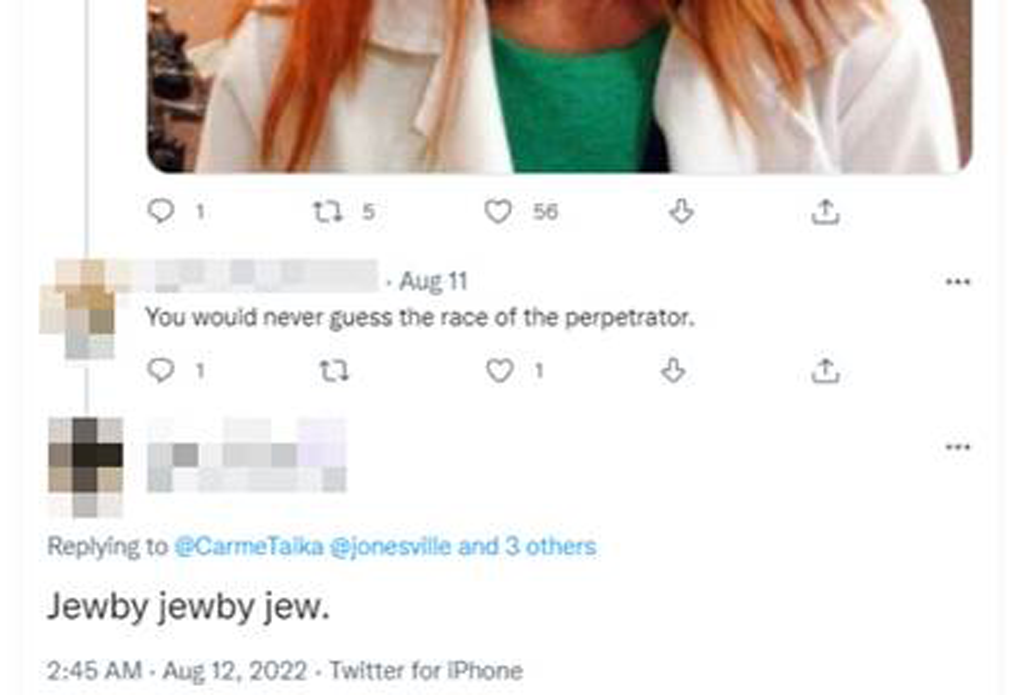 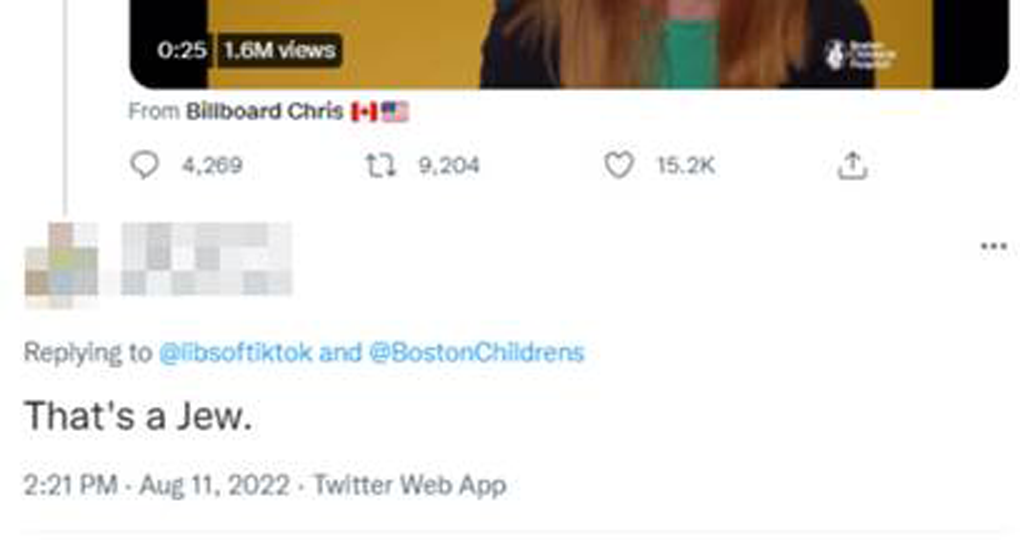 Deeply antisemitic influencer Harry Vox featured the same BCH video on an episode of his online show “Unsafe Space” with the headline, “Jewish Hospital Removes Uteruses of Young Girls.” The video description blames Jews for spearheading “transgendermania” and alleges that their goal is “the breakdown of the family and the supremacy of the Jewish people to replace American hegemony.” One viewer claimed in the video’s comment section that Jews are purposely trying this procedure on non-Jewish children but would never try it on their own. Another responded, “Jews are flesh mutilated dogs!” 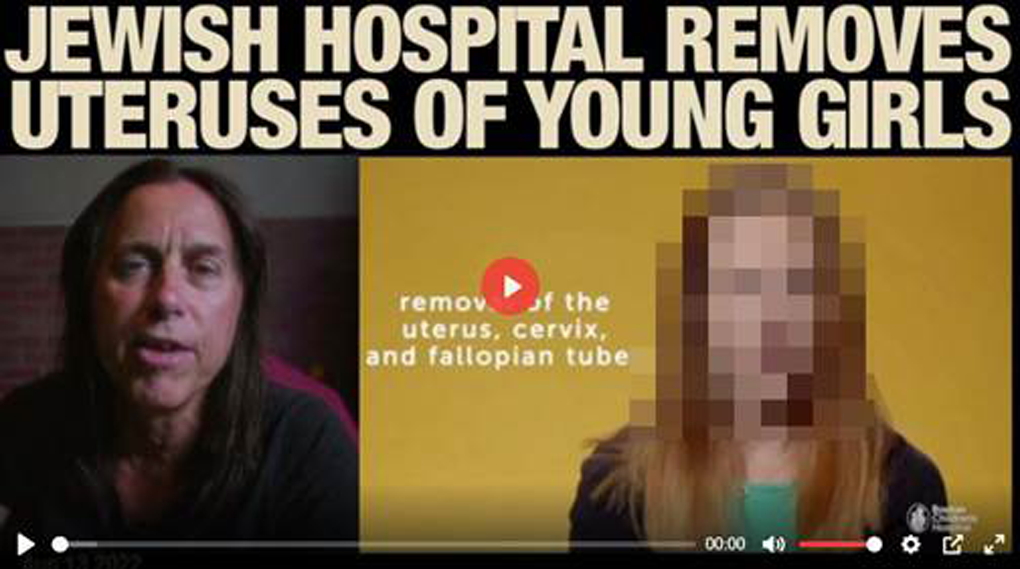 Harry Vox’s video targeting BCH with antisemitic and conspiratorial statements.
These targeted remarks were not limited to attacking just one BCH doctor. Replies to videos featuring different BCH staff included unfounded assumptions and offensive language, also insinuating that Jews find it “amusing” to watch non-Jewish youth receive gender-affirming care. “Is this just something they find amusing for the goy?” one commenter asked. 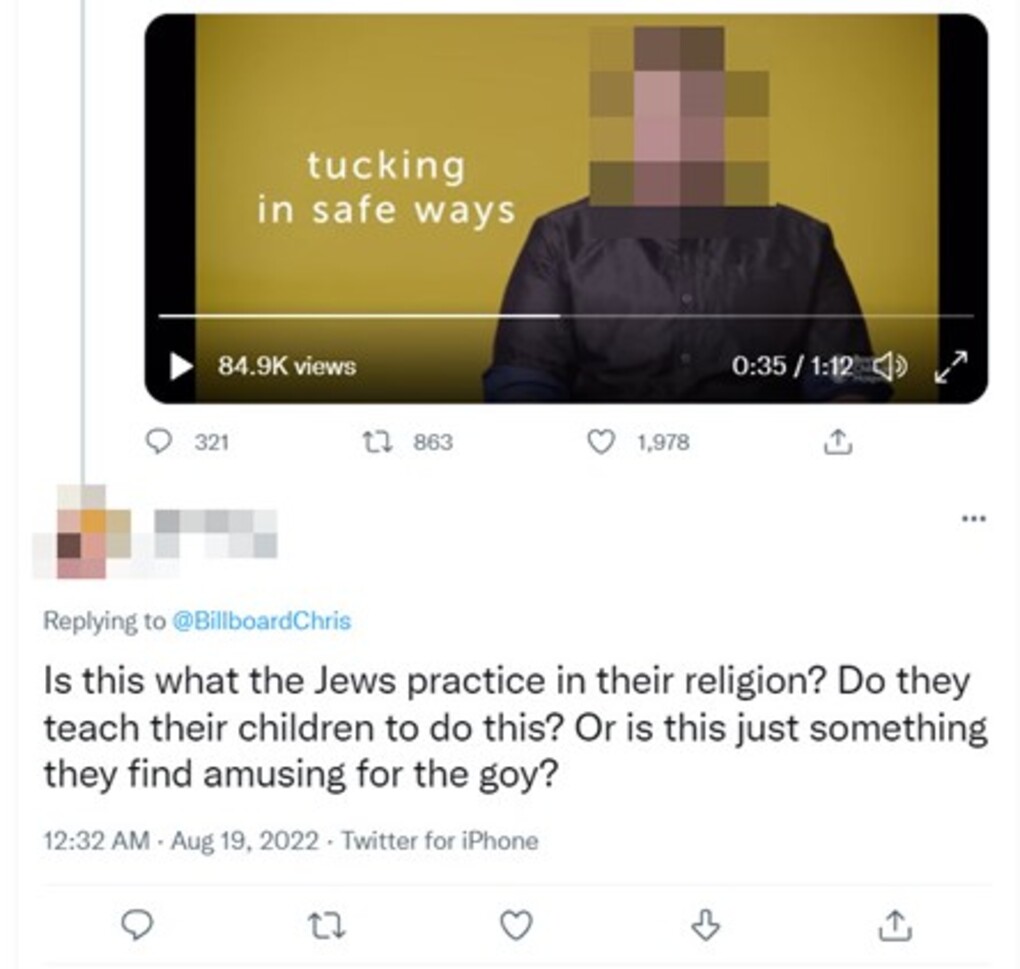 Online responses to the Yale Pediatric Gender Program video also espoused conspiratorial rhetoric which included baseless accusations of child abuse. Tommy Robinson, a British far-right activist known for his anti-Muslim beliefs, posted the Yale video on his Telegram channel and described the doctor as “demonic,” then added “These people...need to be dealt with.” 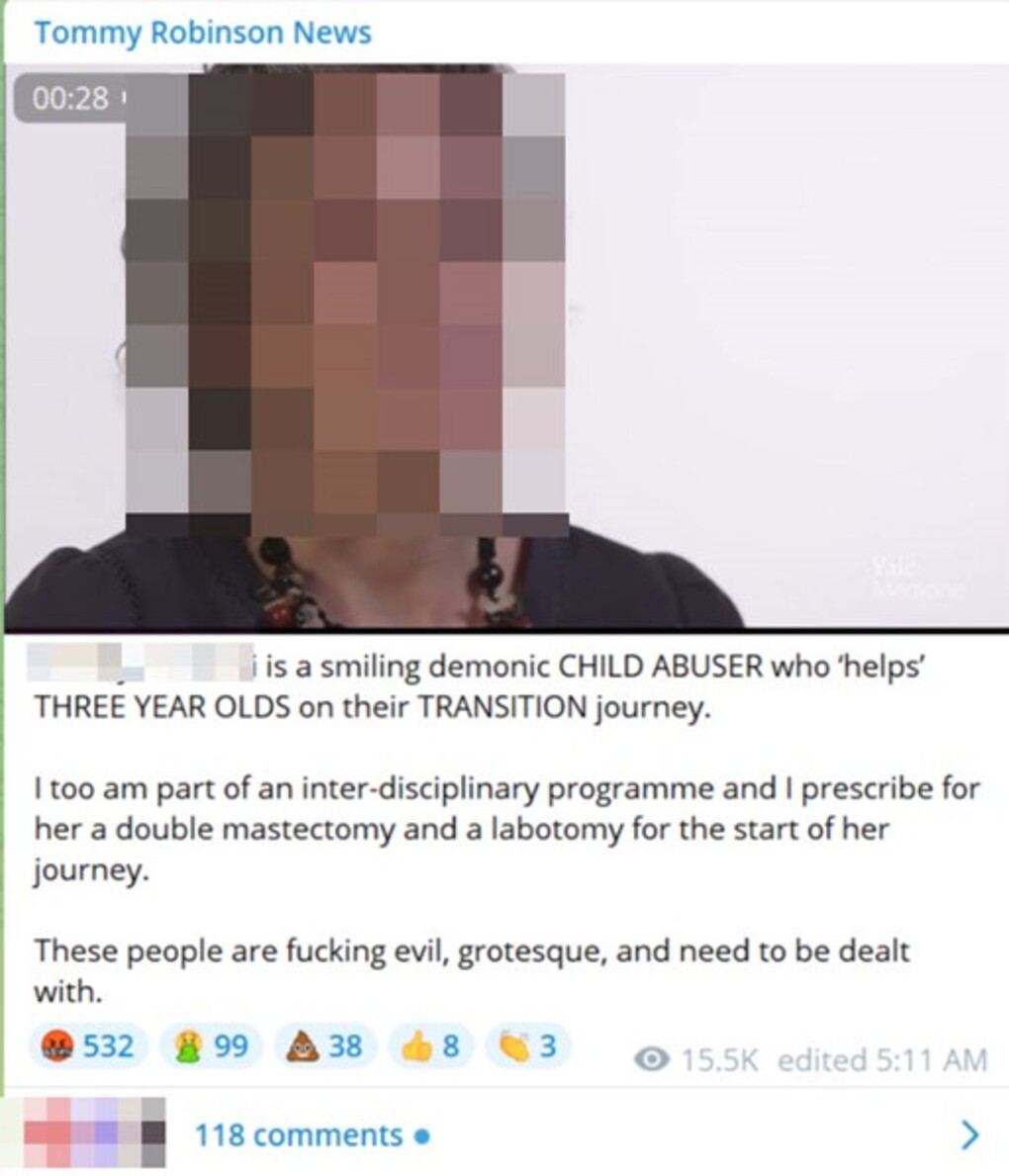 Comments on his post illustrated violent fantasies about murder or dismemberment. One user simply stated, “Pull the trigger.”

As with the BCH videos, remarks about the Yale doctor included antisemitic discourse. One response on Twitter showed the doctor’s last name inside the three parentheses of the echo symbol,  a known antisemitic dogwhistle. Another response asked, “Why are so many of these child mutilating supporters jewish?”

Another user suggested that the doctor was Jewish, followed by the statement, “every single time!” This is another common antisemitic trope on the far-right, in which every problematic person is “revealed” to be Jewish.

Some responses to the Yale video also included more general antisemitic conspiracy theories. In one case, a user blamed Jews for their control over the “Deep State” – a popular QAnon theme. 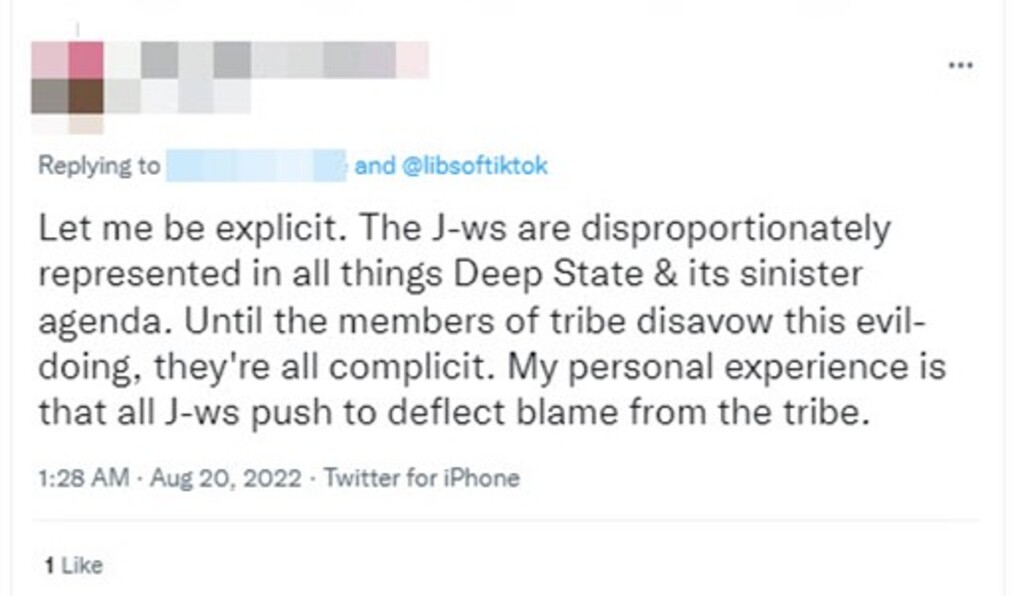 Overlapping antisemitic conspiracy theories and transphobic discourse have existed online for years and represent one part of a broader strategy by the far-right to target vulnerable groups while appealing to centuries-old bigotry against Jewish people.

As more providers of gender-affirming healthcare are targeted by hate speech and harassment on both fringe and mainstream media platforms, conspiratorial lies will continue to spread, putting providers and patients at increased risk.