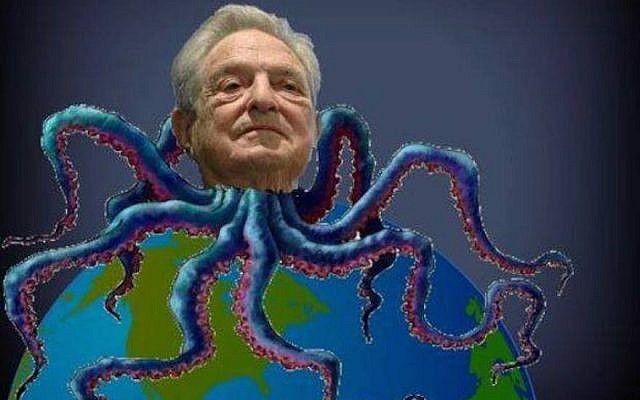 A caricature of George Soros as a tentacled monster has appeared on various right-wing and pro-Russian web sites since at least 2015.

Hungarian Jewish billionaire, philanthropist and Holocaust survivor George Soros is widely recognized for funding progressive political and social causes, usually through grants made by his Open Society Foundations. As a result, Soros has become a lightning rod for conservative and right-wing groups who object to his funding of liberal causes.

In far-right circles worldwide, Soros’ philanthropy often is recast as fodder for outsized conspiracy theories, including claims that he masterminds specific global plots or manipulates particular events to further his goals. Many of those conspiracy theories employ longstanding antisemitic myths, particularly the notion that rich and powerful Jews work behind the scenes, plotting to control countries and manipulate global events.

The right-wing government of Viktor Orbán in Hungary have attacked Soros for years, claiming that he seeks to undermine Hungary’s national ethos. The vehemence of the anti-Soros campaigns is chilling. For example, a slew of posters that appeared in Budapest last summer reminded many observers of Nazi-era propaganda used to stir up hatred and violence against Jews.

However, such anti-Soros activity is not unique to Hungary. Soros long has been a punching bag of authoritarian regimes across Eastern Europe where resentment lingers for his work to build democratic institutions and governments after the fall of the Iron Curtain. And voices in some liberal democracies like Israel cast Soros as a central figure trying to undermine the national interest.

In the United States, Soros long has been a favored target of the so-called alt right and other right-wing extremists. Their online echo chambers reverberate with conspiracies about Soros, accusing him of attempting to perpetrate “white genocide” and push his own malevolent agenda. In a report published earlier this year that analyzed antisemitic speech on Twitter, ADL found that Soros figured prominently in a significant number of antisemitic tweets.  One noteworthy allegation claimed that Soros was responsible for the deadly “Unite the Right” rally in August 2017 in Charlottesville, Va. Other tweets referred to his Jewish heritage in pejorative terms and claimed that he’s trying to undermine all of Western civilization.

More recently, we have seen conspiracy theories surface that blame Soros of funding protests against the appointment of Judge Brett Kavanaugh to the Supreme Court. A series of hateful posters on this topic were plastered on colleges campuses, all part of a campaign engineered by the neo-Nazi Daily Stormer website. And just this week anti-Muslim advocate Frank Gaffney sent an e-mail blast to his supporters asking, “Is George Soros the anti-Christ?” and suggesting that his record “is one of such malevolence and destruction that he must at a minimum be considered the anti-Christ’s right-hand man.”

But it's been equally troubling to see claims of Soros-driven conspiracies move into the mainstream. Even if unintentional, politicians and pundits repeating these unsubstantiated conspiracies essentially validate the same hateful myths propagated by antisemites.

A person who promotes a Soros conspiracy theory may not intend to promulgate antisemitism. But Soros’ Jewish identity is so well-known that in many cases it is hard not to infer that meaning. This is especially true when Soros-related conspiracy theories include other well-worn antisemitic tropes such as control of the media or banks; references to undermining societies or destabilizing countries; or language that hearkens back to the medieval blood libels and the characterization of Jews as evil, demonic, or agents of the antichrist.

Even if no antisemitic insinuation is intended, casting a Jewish individual as a puppet master who manipulates national events for malign purposes has the effect of mainstreaming antisemitic tropes and giving support, however unwitting, to bona fide antisemites and extremists who disseminate these ideas knowingly and with malice.