The increasing conflict in Israel and Gaza in May 2021 has elicited social media commentary from around the world. In some cases, criticism of Israel has crossed the line into antisemitism. On Twitter, a number of antisemitic trends have emerged, including praise for Hitler, promoting tropes about Jewish control and demonizing all Jews.

Invocation of Hitler and the Holocaust

Antisemitic posts referencing Hitler and claiming he was “right” about Jews have been particularly popular in recent days.

Pakistani actress Veena Malik, who has over one million followers on her verified Twitter account, posted on May 11: “I would have killed all the Jews of the world...but I kept some to show the world why I killed them,” falsely attributing the quote to Hitler.

Malik’s tweet has since been deleted, though variations on the same quote have been posted by many other users.

An analysis of Twitter in the days following the outbreak of the recent violence showed more than 17,000 tweets which used variations of the phrase, “Hitler was right” between May 7 and May14, 2021. Many of those tweets expressed blatant antisemitism and the belief that the current fighting between Israel and Hamas reveals the evil nature of Jews everywhere.

“….Hitler knew you people very well. Europe knew the type of human beings you were why they all relocated you people far away from them.  I believe Hitler was right to have wanted to wipe you off. He saw what we didn't see.  He saw future terrorist.” 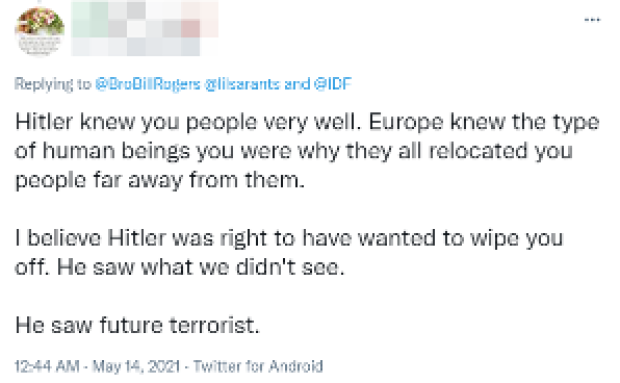 “These Jews have always showed their true faces. Even Quran said they cannot be Muslim’s friends! Hitler was right these low life Jews should be white washed from this earth! #AlAqsaUnderAttack #BoycottIsrael #AlAqsa”

“….Adolf Hitler was right, Jews are Animal not Humans and now whole world is watching the proof #GazzaUnderAttack #PalestineUnderAttack”

“I think #Hitler was right when it comes to #Holocaust  Some people just don't deserve to live and Israeli are at the top of this list. British just collected the scum of whole world and dumped it at the holiest of places. #PalestineUnderAttack  #GazaUnderAttack  #IsraelTerrorist” 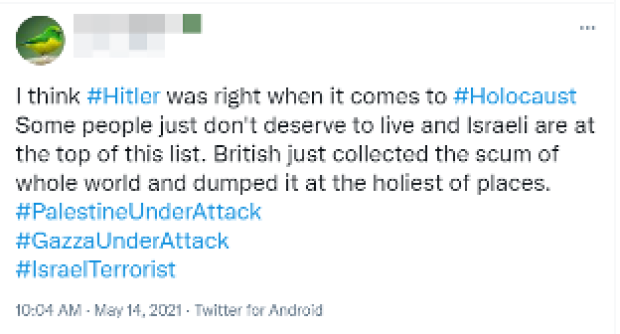 Some of the ongoing Twitter reactions have crossed the line from protesting the policies or actions of the Israeli government into antisemitism by demonizing all Jews, Zionists or Israelis.

This demonization of Jews included characterizing Jews or Zionists as sub-human animals and scumbags. “Jews are not humans. They are animals. Full stop,” stated one post. Another user wrote, “these zionists are a bunch of animals...even calling them animals is offensive to animals. they are the lowest of the low scumbags on this earth.” 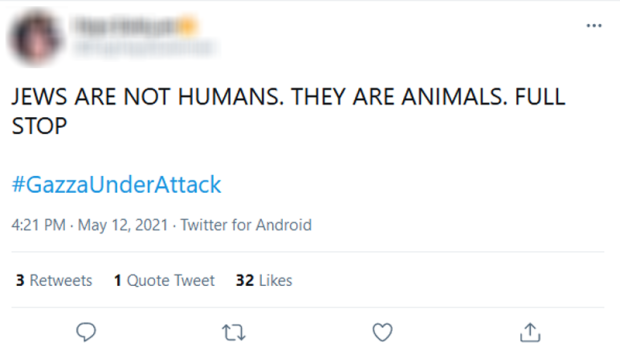 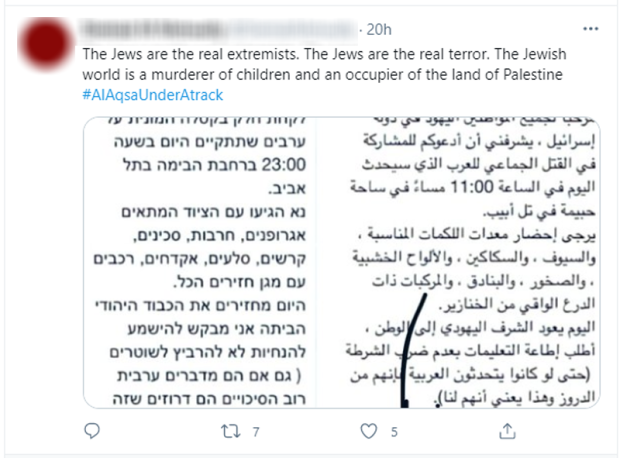 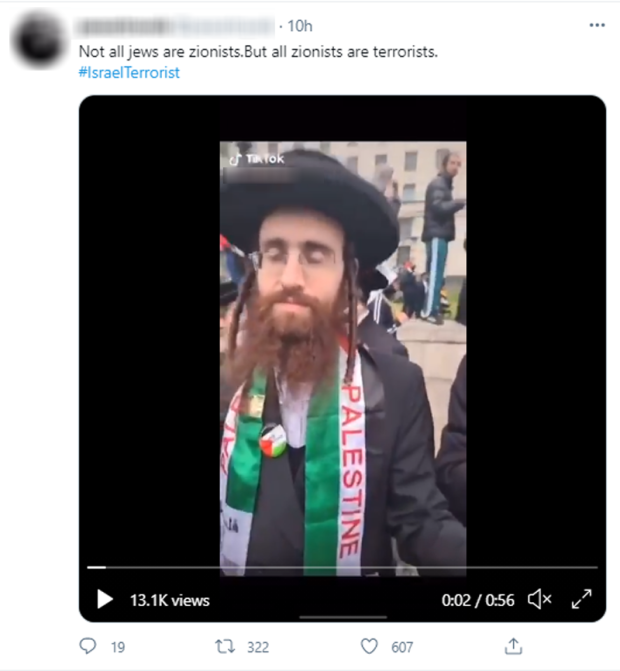 At one point on May 13, #covid1948 became a trending hashtag, with over 80k uses globally; though it is likely that only a minority of those tweets included additional antisemitic language. The hashtag can be understood as implying that the founding of Israel in 1948 was as devastating for the world as the Coronavirus pandemic. Some of this language seems to imply that Jews themselves are a deadly virus.

Predictably, some criticisms of Israel have employed age-old antisemitic tropes about Jewish power and control over media, government and finance.

“Every day, many Palestinians are oppressed by the Israelis, but because of the control of the media by the Zionists, they make Israel innocent and the Palestinians an aggressor,” read one such tweet. 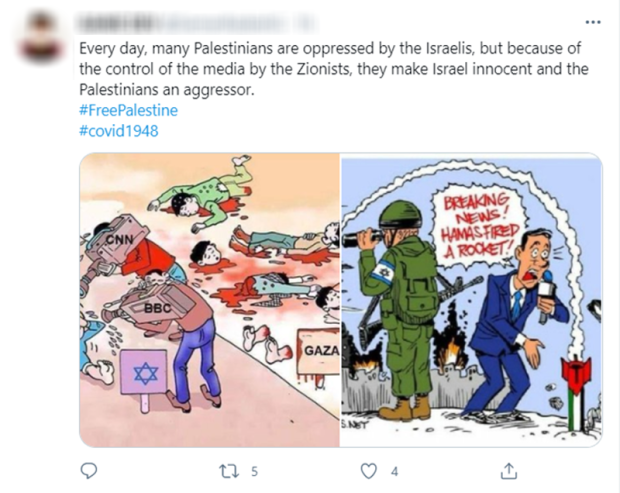 Another user focused their attention on supposed Jewish control of the US government: “Fucking bums. The jewish [sic throughout] lobby influence over United States middle east policy is a joke for a democratic government. The people electing the gov don’t matter because the zionists control it.” 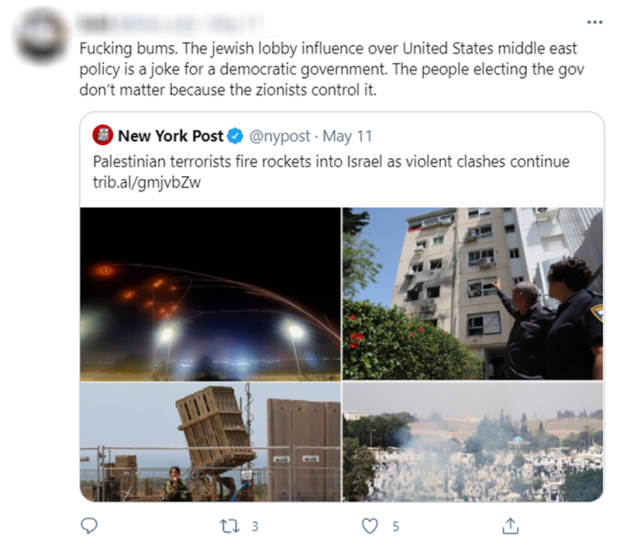 Another post characterized Israel as the “real” terrorist, invoking the antisemitic trope of Jews as puppet masters. The post criticized “Western media,” demanding they “tell the fucking truth and stop being puppets to the money masters.” 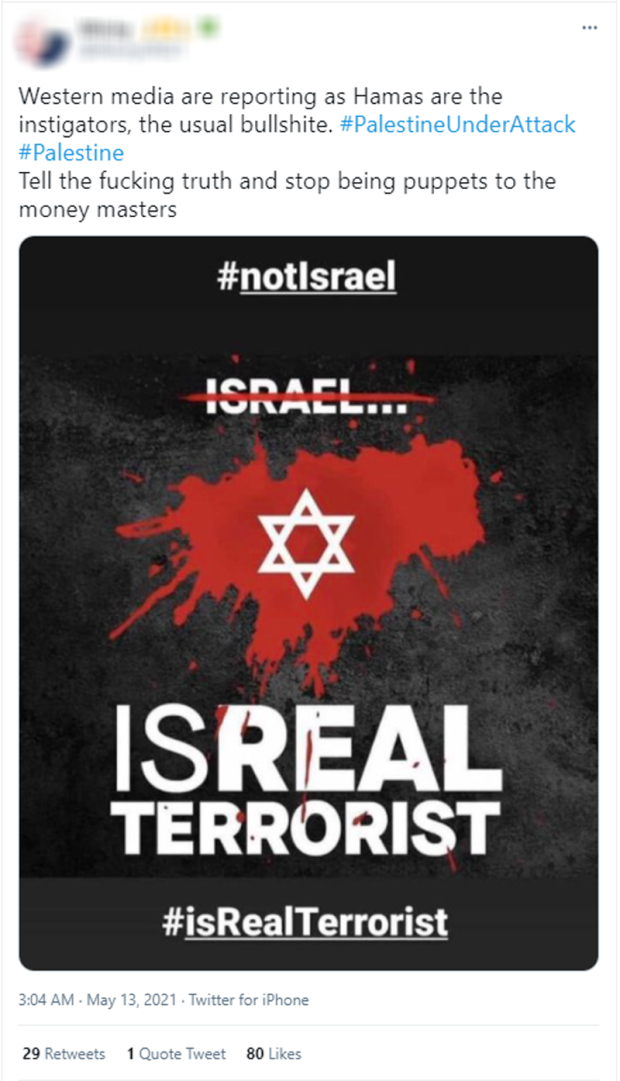 Tweets also referenced antisemitic theories about Jews and money. Singer Rihanna was criticized after she shared a post with her 95 million Instagram followers lamenting the suffering of “innocent Israeli and Palestinian children” in the ongoing conflict. The statement was shared on Twitter, where a number of users criticized Rihanna for her perceived neutrality, claiming that the inclusion of Israeli children in her statement was intended to protect her financial interests.

“The rich go protect their bag bc the Jews run the media and most of their checks in America lol,” read one comment. “She knows that Israeli Fenty Account gonna dry up if she sides with Palestine, so she had to pander to her pocketbook by remaining neutral,” read another. 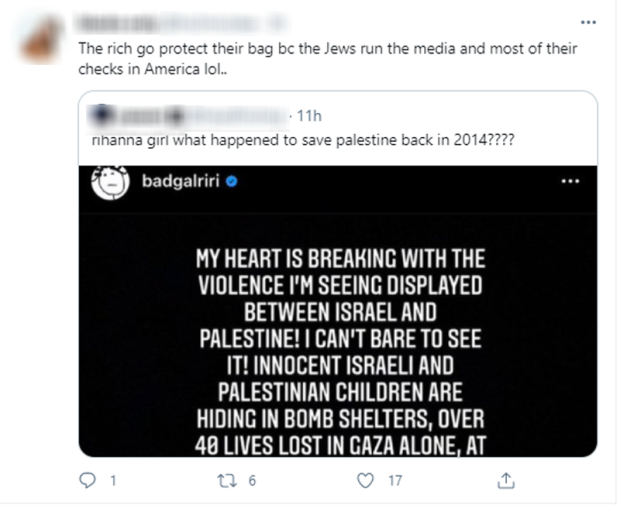