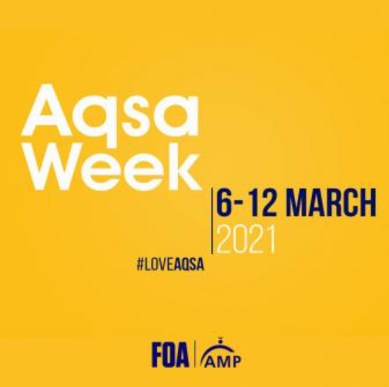 From March 6-12, 2021, anti-Israel groups American Muslims for Palestine (AMP) and UK-based Friends of Al-Aqsa held an all-virtual Aqsa Week, described on AMP’s website as “programs and educational webinars... that focused on Jerusalem, its Islamic significance...the Prophetic connection to Palestine to[sic] the dark era of the Crusades and US/UK policy towards Jerusalem.”

Many events, however, featured speakers who veered into inflammatory rhetoric, including calling for the use of physical force to conquer Jerusalem (and at times all of Israel) and labeling the State of Israel as “foreign” and a “cancer” in the region akin to the Christian Crusader fortresses. Some espoused conspiracy theories denying the existence of the ancient Jewish Temple in Jerusalem and claiming there are Israeli plans to destroy the Al-Aqsa mosque there and re-build the Jewish Temple in its place.

In several cases, panelists spoke of a legitimate Jewish connection to Jerusalem that must be respected and stated that the current conflict is not a religious war. Nevertheless, speakers made clear that Jews only have religious rights in the city, not national rights (this was often expanded to include anywhere in the whole of Israel). While legitimate policy concerns were voiced, they were overshadowed by rhetoric that veered into historical falsehoods and calls for militarism and violence and, at times, tapped into antisemitic tropes.

Calls for use of physical force: Perhaps the most dangerous language espoused during Aqsa Week were the calls for Jerusalem and Israel to be “liberated” militarily or by other physical means. Such rhetoric plays into support for the violence Israelis have experienced, as thousands of Jewish and/or Israeli civilians have been killed from violent attacks since the conflict between early Zionists and Palestinians began in the early 20th century. Remarks included:

Comparisons to the Crusades/Israel as a “foreign entity” and “cancerous:” Multiple speakers employed inflammatory rhetoric comparing the existence of the State of Israel to the Christian Crusader fortresses in the 11th century. Such comparisons are baseless, as the State of Israel has been accepted for decades as a legitimate state by the international community, including the United Nations. Conversely, it is commonly accepted that the Crusaders’ actions were illegitimate. This rhetoric, including calling Israel a “foreign entity” and “cancerous,” goes well beyond accepted norms of critique and human rights and can play into harmful tropes.

Denial of Jewish history and conspiracy theories: Repeatedly, speakers dismissed the existence of an ancient Jewish Temple in Jerusalem in the vicinity of the Al-Aqsa mosque and claimed that Israel has plans to destroy the Al-Aqsa mosque and re-build a Jewish Temple in its place. While it is accurate that a handful of Israeli Jewish extremists have been charged (and in some cases found guilty) by the Israeli government of advocating these actions, such dangerous and outrageous ideas are limited to only the most extremist elements in Israeli society. No Israeli government has ever supported or even considered such a plan.

The denial of the existence of an ancient Jewish Temple in Jerusalem is a phenomenon that dates back decades. It has no basis in archaeological evidence and is often wielded to further antisemitic tropes against a Jewish connection to Jerusalem.