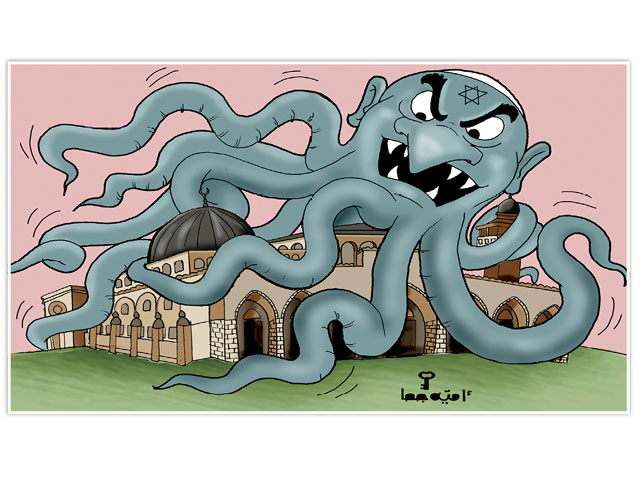 President Trump’s recognition of Jerusalem as Israel’s capital was widely condemned by Arab governments. Arabic-language media followed suit, and some outlets even used the historic declaration to propagate anti-Semitic cartoons relating to Jews, Jerusalem, and/or U.S.-Israel relations. In some instances, these cartoons suggest that Israel controls or dominates U.S. foreign policy, for example depicting U.S. President Donald Trump as a puppet operated by Israeli Prime Minister Benjamin Netanyahu, the U.S. wearing Star-of-David-shaped binoculars and glasses, and President Trump as a ladder on which PM Netanyahu is climbing as he carries off the Old City of Jerusalem.

Other cartoons use dehumanizing animal imagery, for example presenting Israel as a dog or a worm devouring the Dome of the Rock. Another presented Israel as a blue octopus wrapping its arms around the al-Aqsa Mosque. Not only is this image of a blue octopus a hateful figure that has its roots in Nazi-era propaganda against the Jewish people, but it is also the second time this artist used such imagery in the Qatari press in less than a year. However, this time the image was arguably more anti-Semitic than its usage back in July, because now the artist saw fit to also give the octopus a hooked nose, skullcap, pointed teeth, and large ears.

Others of these cartoons invoke the stereotype of a greedy, grotesque, or evil-looking medieval Jewish figure, in one instance even painting him the color green. Notably, ADL has previously documented similar cartoons that purport some sort of Jewish conspiracy to take over the Temple Mount/Al-Aqsa compound. Indeed, many of these latest images in the Arabic-language press seek to suggest that Muslim holy sites in Jerusalem are now in mortal peril, ignoring that President Trump explicitly stated in his Jerusalem speech that “I call on all parties to maintain the status quo at Jerusalem's holy sites, including the Temple Mount, also known as [al-]Haram al-Sharif.”

Current examples include the following cartoons (scroll mouse over image for cartoon information): Headline: "Declaring Jerusalem as the capital of Israel." Headline: "American bias." The figure representing Israel is holding a paper on which is written "Jerusalem is the capital of Israel."