Beyond Ferguson and Staten Island: Where Do We Go From Here?

In the wake of two grand jury decisions—in Ferguson, MO and Staten Island, NY—not to indict the police officers who were involved in the killing of black men, the time has come to ask ourselves: Where do we go from here? There are a myriad of ideas and legislation on the table--diversity training for the police, funding to provide body cameras for police officers and legislation to tighten standards on military-style equipment for local police departments. These are all worthy ideas and should be pursued with both care and speed. 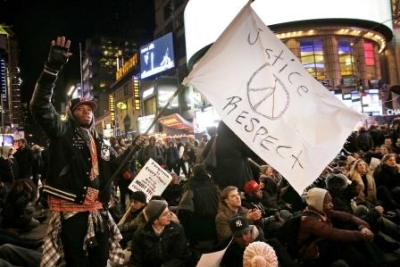 At the same time, as Americans, we need to come to grips with the concept of implicit bias and how it works its way into the small and big things in life.

Implicit bias is a positive or negative (usually negative) mental attitude toward a person or group that we hold at an unconscious level and without intentional control. The notion of implicit bias was conceived by Anthony Greenwald and Mahzarin R. Banaji in 1995 and there is now substantial and empirical support for the idea that most people hold implicit biases about minority and marginalized groups such as people of color, women, LGBT people and others.

Implicit bias happens when two job applicants—one named Ayesha and the other, Allison submit the exact same resume for a job and Allison is 50% more likely to get a call. Implicit bias fuels the school to prison pipeline that disproportionately disciplines, suspends and expels students of color in our nation’s schools. Implicit bias propels the microaggressions many people experience on a daily basis, which can often “feel like broken glass.” The fact that African Americans are disproportionately represented in all levels of the criminal justice system can be seen as implicit bias.

When schools want to address bias in the classroom, they tend to focus on discrimination and overt forms of racism, sexism and other injustices. This is critical. However, in order for our society to make a fundamental change, we need to also talk about, explain, teach, understand and do something about implicit bias.

Some ideas for educators and parents: