Beyond the Statistics: Counting and Responding to Hate Crimes 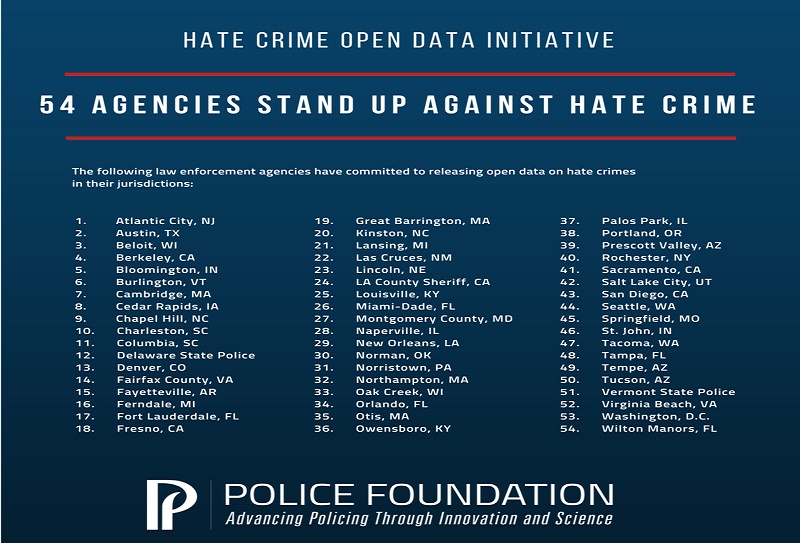 This week is the anniversary of the white supremacist rally in Charlottesville, Virginia, which attracted hundreds of bigots from around the country.  We remember the TIKI torches, the chants “Jews will not replace us!” from angry white men, and the bias-motivated murder of counterprotester Heather Heyer.

On this anniversary, as groups in many cities are rededicating themselves to community-building and strengthening institutional resiliency, we should also recognize how effective hate crime response and comprehensive hate crime data collection can advance police-community relations.

Data drives policy.  The starting point for addressing hate violence in America is to know the nature and magnitude of the problem.  ADL has published an Audit of Anti-Semitic Incidents, compiled by our 25 Regional Offices, since 1979.  And, since 1990, under the authority of the Hate Crime Statistics Act, the FBI has been publishing that data from the nation’s 18,000 law enforcement agencies in an annual jurisdiction-by-jurisdiction report, Hate Crime Statistics.

The FBI has taken its data collection responsibilities very seriously, including publishing a very fine Hate Crime Data Collection Guidelines and Training Manual.   In fact, the FBI HCSA report is now the nation’s single most important snapshot of hate in America – and an important measure of how ready and able police agencies are to address the problem.  However, there are two problems with the data – both of which are being addressed now.

First, it is absolutely clear that the HCSA data significantly understates the actual number of hate crimes committed in our nation.  In 2016, only 15,254 federal, state, and local law enforcement agencies – out of 18,000 – reported hate crime data to the FBI.  And, only a very small number -- 1,776, 12 percent – reported even a single hate crime to the FBI.  Every other agency, including 92 cities with over 100,000 people, affirmatively reported zero (0) hate crimes, or did not report any data at all.

Now, working with the broad coalition of civil rights, religious, education, and professional organizations that advocate on hate crime issues, the Justice Department, the FBI, and leading police organizations, including the International Association of Chiefs of Police (IACP) and the Police Foundation, are elevating their efforts to promote comprehensive hate crime data collection

After Charlottesville, the IACP, in conjunction with the Lawyers Committee for Civil Rights Under Law and its’ Stop Hate Project, convened a series of meeting with leading civil rights and law enforcement leaders to develop an achievable action agenda designed to help stakeholders across the United States respond more effectively to these crimes

And, second, as part of its Police Data Initiative, the Police Foundation has highlighted best practices in an excellent guide promoting the benefits of fighting hate with more accessible and more timely data – their Hate Crime Open Data Initiative. To date, 54 agencies have committed to real-time tracking and release of hate crime data in their jurisdictions.  By making data readily available on their websites, these police department can better allocate resources and raise community awareness of hate crimes as they occur.  Police departments in Washington, DC,Bloomington, Indiana, Louisville, Kentucky, and Seattle, Washington have been cited as among the best examples of departments with frequently updated, accessible hate crime data, which can promote two-way engagement and problem-solving between law enforcement and the community

The Charlottesville white supremacist rally last year was a shock to the nation – and a call to action.  We cannot outlaw hate.  But we can advocate for stronger, more inclusive hate crime laws, including making the Virginia law more inclusive and add a police training requirement.  Hate crime statistics do not speak for themselves – because behind each number is a victim injured or intimidated for no other reason than how they worship, who they love, or who they are.  And we should count every hate crime – in real time – and ensure that police officials have the training they need to respond effectively.