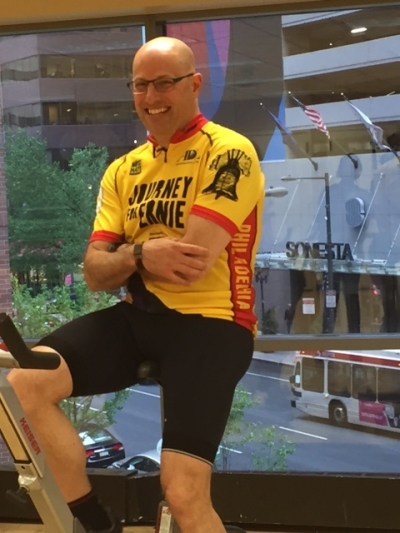 Ed Blumenthal is fighting anti-Semitism and hate with everything he’s got—including his legs.

His late father, Ernie Blumenthal, escaped from Nazi Vienna in 1938, but luckily found a home in Philadelphia. His grandfather barely escaped some time later.

To honor the memory of his father, who died recently from pancreatic cancer, and to raise awareness of that illness and of anti-Semitism and hate, Ed rode his bike from Pittsburgh to Philadelphia, a three-day, 374-mile trip. All monies pledged through “The Journey for Ernie,” as Ed calls it, will support the Anti-Defamation League’s 2016 Walk Against Hate in Philadelphia on Sunday, May 15.

Ed and his family are passionate about the Anti-Defamation League. He serves on the Executive Committee and Board of ADL’s Eastern Pennsylvania, Southern New Jersey and Delaware Regional Office. His daughter, Carly, has been an ADL Peer Trainer in a No Place for Hate School® for three years, and his son, Kyle, is also an ADL Peer Trainer.

ADL’s Walk Against Hate is an annual event that attracts thousands and brings the city of Philadelphia together. This year it will take place from 9 a.m. to 11:30 a.m at the Marine Parade Grounds at the Philadelphia Navy Yard, and will feature performances by a variety of entertainment acts, a diversity expo, an expression area for kids and a headline performance by hip-hop artist and television star, Yazz the Greatest.

You can support Ed’s journey and encourage diversity and inclusion by visiting www.walkagainsthate.org. Hope to see you this Sunday!