BitChute: A Hotbed of Hate 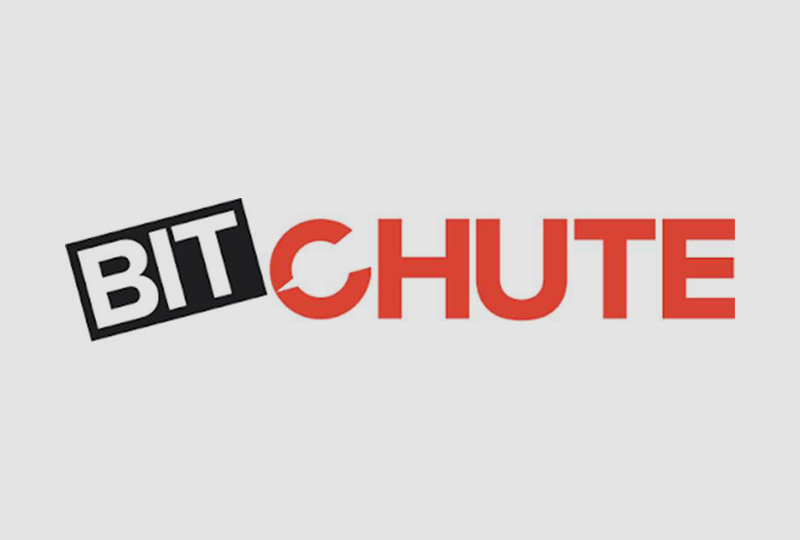 Under the guise of anti-censorship and free speech, video-hosting service BitChute has become a hotbed for violent, conspiratorial and hate-filled video propaganda, and a recruiting ground for extremists.

BitChute founder Ray Vahey’s concept for the platform came from, in his words, “seeing the increased levels of censorship by the large social media platforms in the last couple of years. Bannings, demonetization, and tweaking algorithms to send certain content into obscurity and, wanting to do something about it.” Vahey’s vision has become a reality, and today, many of the YouTube accounts demonetized or banned due to community standards violations are migrating to his platform to disseminate their vitriolic content.

While Bitchute’s community guidelines specify that incitement to violence “will not be tolerated,” videos and comments calling for the extermination of Jews, glorifying violent beatings by police and anti-government militias, vilifying Black people and demonizing immigrants, the LGBTQ+ community and Muslims, proliferate freely across the platform.

The following represents a small snapshot of Bitchute’s vast ecosystem of hate and violent extremism.

BitChute as the violent extremists’ outlet

For white supremacists, BitChute is a safe haven where they can spread vitriol and recruit members. Swastikas and SS symbols are commonplace on the site, alongside videos praising Hitler. Across private and public channels in Telegram—the encrypted messaging app increasingly used by white supremacists—extremists share BitChute links of propaganda and conspiracy theories that comport to their beliefs. Further, many of these groups link to their Telegram and other social media channels in their BitChute descriptions.

The white supremacist group Patriot Front has three BitChute channels it uses to spread its propaganda and provide links to the group’s Telegram, Gab, and Minds accounts. The videos consist of montages of members marching in riot gear with torches, training in hand-to-hand combat, and hanging banners and fliers, calling on followers to “fight back” because “America is our birthright.” The group also uses the comments section of their BitChute videos to post recruitment links.

The Proud Boys—a right-wing extremist group known for their Islamophobia, transphobia and proclivity for violence—have a channel with 1.5 million views and 297 videos. Their BitChute channel provides links to messaging apps Telegram and Parler. Their video titles frequently refer to “Black thugs” and glorify violence, as is the case in a July 4th tribute video that simulates Proud Boys shooting their opponents. Like Patriot Front, the Proud Boys use the comments section to recruit new members and give advice about the membership process.

The “Road to Power” broadcasting outlet, run by white supremacist Scott Rhodes, achieved notoriety in 2017 when police linked him to a spree of racist, antisemitic and bigoted robocalling incidents that the FCC determined were meant to “cause harm.” BitChute, however, still allows Rhodes to broadcast his messages, with videos in which he asks, “Is there anything more worthless than a negro,” frequently uses the n-word and “kike,” shares clips of a Jewish doll burning in an oven overseen by Hitler, and warns, “Watch out, Jews.”

Beyond channels dedicated to organized groups, additional channels display the hate-fueled content that appeals to a wide range of ideologues and extremists. One such channel—that has since been blocked—called “White Power,” had 1.2 million views of 1.4 thousand videos. The owner described himself as “proud to be from an Aryan/White culture with a Mono-Ethnic heritage, even though my country is overrun by mongrel jews [sic], filthy browns of all sort, yellows, queers and race traitors who all seek the death of my folk. I am a proud Racialist, National Socialist and Aryan Supremacist.” He stated, “This channel promotes total Aryan take-back, no matter how we have to do it.” The bottom of his “about” page proclaims, “Alle Juden müssen sterben!!!!!!!,” which translates to “All Jews have to die.”

Since its recent removal, duplicate white power accounts have emerged, all claiming, “the satanic cock sucking jews  [sic throughout] reported [White Power] and had it blocked…The more the God damned jews and niggers report me, the more channels i create and the more videos i upload, i promise you those pieces of shit will never stop me [sic].”

Another channel called “14HAILVICTORY88”—referencing the white supremacist 14-word creed and their mnemonic for “Heil Hitler”— posts racist and antisemitic videos. In addition to using racial slurs and promoting conspiracies about global Jewish control, the channel celebrates Adolf Hitler and his beliefs.

The “Klan Archives” channel bills itself as “dedicated to the preservation of historical Ku Klux Klan videos.” It boasts almost 200,000 views and 600 videos glorifying the KKK.

While blocking the original “White Power” channel is a sign that BitChute is beginning to take action against the hate on its platform, any impact is muted by the hate-filled channels that remain.

BitChute as the post-ban option

When YouTube bans accounts for violating their community standards, those users often migrate their content to BitChute. The owners of some YouTube accounts also actively maintain BitChute accounts to mirror their video content in the event YouTube bans them in the future.

Of the 21 antisemitic and white supremacist YouTube channels identified by ADL in 2019, 14 have active BitChute accounts. While 11 of these YouTube accounts have since been banned or otherwise removed, the corresponding BitChute channels have been viewed more than 10.6 million times. 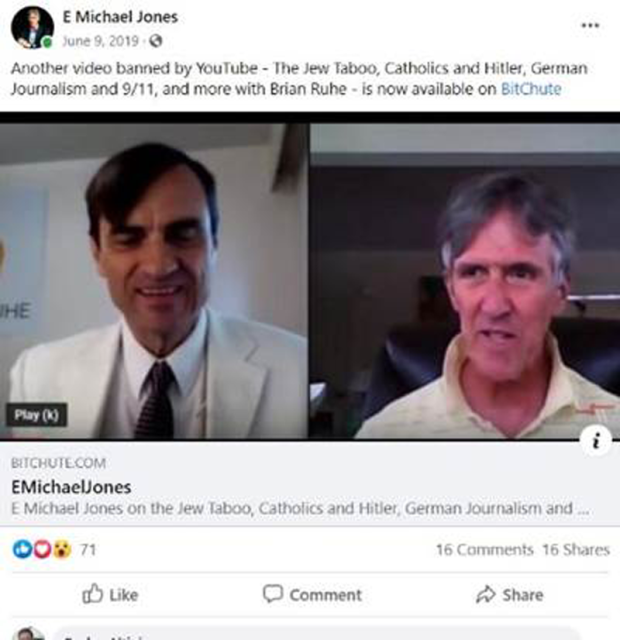 In Brother Nathanael’s BitChute videos, he refers to Jews as “parasitic” and claims “we have a chance to save America from Jewish ruin.” TruNews—the fundamentalist Christian streaming site that frequently espouses antisemitic, anti-Zionist, anti-LGBTQ+, and Islamophobic rhetoric—was removed from YouTube in February 2020 but maintains an active BitChute channel.

Likewise, the infamous anti-government conspiracy theorist and Infowars host Alex Jones has been removed from YouTube, but now uses BitChute. Jones, whose rhetoric has fueled paranoia and hatred, has over 10.4 million views of his BitChute channel. Another channel with more than 8 million views under the name “Ron Gibson” describes itself as “an official Alex Jones Infowars Network Channel.”

BitChute has positioned itself as the anti-censorship alternative to other social media platforms; today, violent extremism and hate speech is rampant on the site, delivering white supremacist propaganda, overt racism and antisemitism and dangerous conspiracy theories to a wide and growing audience.

Given the various kinds of clearly hateful, extremist and violent content cataloged here, and Bitchute's largely hands-off policy to content moderation, it’s reasonable to ask how a service like this remains active – and which companies support its platform.

Bitchute's website is hosted by the domain registrar and hosting provider Epik. Epik is known to provide services to other extremist websites, including The Daily Stormer and Gab. Epik's CEO Rob Monster has made it clear the company will continue to host any content that is not explicitly breaking the law. This is at odds with the broader ecosystem of digital social platforms and their sense of responsibility for mitigating hateful content.

Bitchute’s cybersecurity protection services are provided by Cloudflare, a web infrastructure and security company that provides free services to any company that asks. In 2019, both Epik and Cloudflare announced they would stop providing services to 8chan after they were made aware of its role in the 2019 white supremacist shooting attack in El Paso, which left 23 people dead. Since then, neither company has instituted a broader policy around providing services to hateful or extremist affiliated websites.