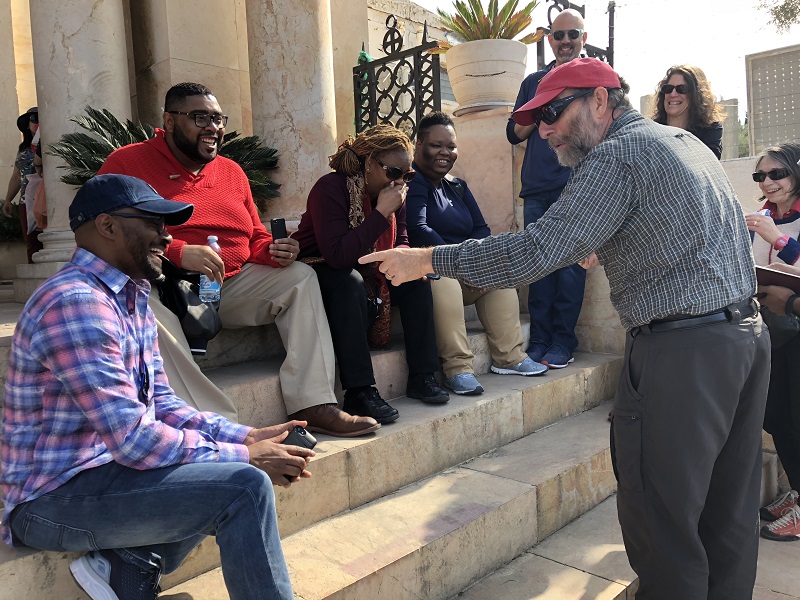 I have traveled to Israel and the Palestinian territories a number of times with interfaith groups, including Catholics, Protestants, Evangelicals and Muslims, among them some African-Americans.  A recent trip that brought together rabbis and African-American pastors from around the country, however, was different because the African-American experience and Black-Jewish relations framed the entire trip.

The trip was sponsored by Interfaith Partners for Peace, a project of Jewish Federations of North America’s Israel Action Network, the Jewish United Fund/Jewish Federation of Metropolitan Chicago, and co-chaired by a Rabbi Michael Siegel and Pastor Chris Harris of Chicago.  IP4P “pairs rabbis and non-Jewish clergy … to enhance interfaith dialogue so that Jews and Christians in the United States and Canada can support co-existence work and build a third narrative — one that exists between the extremes that often dominate discourse on the conflict between Palestinians and Israelis.”  I was invited to be the Jewish scholar-in-residence, teaching about the Jewish context of the New Testament and providing my perspective on interreligious relations. 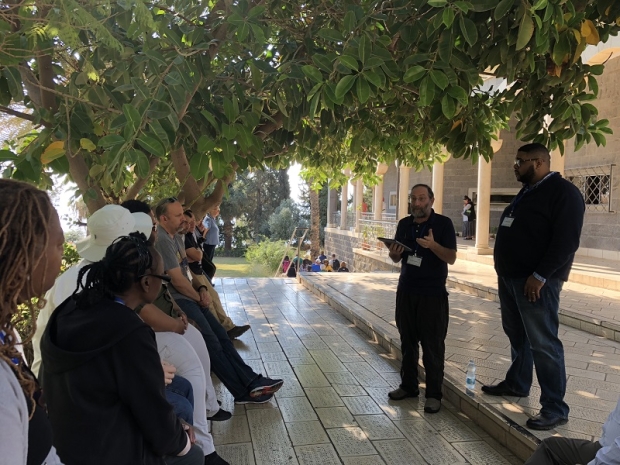 Rabbi Sandmel teaches the Jewish background of the Sermon on the Mount at the Mount of Beatitudes.

Six rabbis and seven pastors spent eight days visiting Christian and Jewish holy sites, meeting Jewish and Arab leaders and activists, and talking intensely, almost non-stop, about a wide range of religious, political, and personal topics that affect each of us as Jews, as African-American Christians, and as citizens of the United States. There were moments of real tension and emotion, tears, and much laughter.

We dedicated an entire day to the experience of Ethiopian Jews in Israel.  We met Danny Limor, the Mossad agent whose clandestine work in Africa was key to the Ethiopian Aliyah.  More than half a dozen members of the Ethiopian community talked with us, including a grad student and social activist; an impressive young attorney who is legal adviser to the National Anti-Racism Coordinator's Office; an Orthodox rabbi; the former Israeli ambassador to Ethiopia; and the deputy mayor of Tel Aviv.  We heard repeatedly about how deep within the culture of the Ethiopian Jews was their longing to return to the land of Israel and how profound it is for them to have come “home.”  This had a powerful impact on all of us. Their experience  frames Zionism as something that beats in the Jewish heart – as it did Ethiopians for millennia – and not just a political movement that emerged as a result of European anti-Semitism and pogroms.

We also learned that coming home has its share of problems.  The Ethiopian community faces significant racism and profiling, its Jewish authenticity has been questioned, and despite the achievement of some, educational and economic inequity remain; boys and young men face particular challenges. For our African American colleagues, this resonated deeply with their own history and experiences even while recognizing the differences: their ancestors were brought to America against their will as enslaved persons, while Israel went to heroic efforts to help the Ethiopians “return,” but has not welcomed them commensurately.  That Jews of color face racism even in the Jewish state was a sad reminder of how deeply racism is woven into human society.

Our colleagues brought their experiences with racism to our discussions of the Israeli-Palestinian conflict as well.  As we crossed the Green Line on our way to Bethlehem, one of them said he had an immediate sense of kinship with the Arabs he encountered because they are people of color.

This is not to say that any of the pastors are anti-Israel.  In fact, I would say the opposite. They recognize the historic connection of the Jewish people to the land, which is, after all, closely bound up with their own Christian faith. And, they respect the desire for Jewish national self-expression.  Indeed, they identify with Jewish suffering – a picture of lynched Jews at Yad Vashem was a significant point of connection.  But the plight of the Palestinians understandably touched them deeply as well.

The rabbis traveling with our group were Reform, Reconstructionist, Conservative and Orthodox.  Our political views were equally diverse.  All of us, however, have a deep bond to Israel, the land, the country, and the people; we have friends and family who live there.  Though we are not Israelis, in many ways for us Israel is “home” as well.  This was not lost on our African American colleagues.  One of them confessed to being jealous that Jews have a home they can name and touch, while she has been completely cut off from her ancestral home and will never know it.

One of the goals of this trip was to inspire the rabbis and pastors to work together in their communities.  One idea is to bring an Israeli program called NATAL to communities of color dealing with trauma.  NATAL responds to the trauma of Israelis living near the Gaza border, who are under constant threat from rockets and terrorism; this can have devastating emotional impact on children and adults alike. In the Unites States, communities of color also suffer from trauma induced by violence.  A pilot program in Chicago has demonstrated that the methods NATAL has developed can be culturally and contextually “translated” so that community leaders can be trained to provide essential support and help their neighbors cope.  Our co-chairs met with Prime Minister Netanyahu to discuss expanding this program, a notion he heartily embraced.

It is impossible to digest everything that occurred on this trip into a short essay.  I learned things about African Americans – and African American Christians – that were new to me.  And I think our African American colleagues learned about Israel and the Jewish community in equally profound ways.  It was the kind of learning and relationship building that can only take place when people are together 24/7 as happens on this kind of trip.  I know that I do not see African Americans and race in America the same way that I did before the trip, and my understanding of Israel has changed as well.

Ultimately, of course, what matters is what the rabbis and pastors do now that they have returned to communities. ADL will facilitate continued partnership in the local communities.  I pray that this trip will be more than simply be a pleasant memory and that it will lead to real cooperation and collaboration.