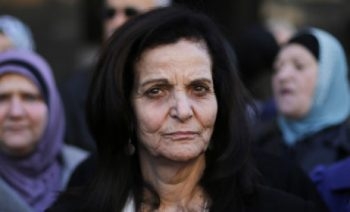 Jewish Voice for Peace (JVP) has confirmed Rasmea Odeh as a keynote speaker at their national conference in Chicago, March 31st – April 2nd.

Rasmea Odeh, a convicted terrorist, is the Associate Director at the Arab American Action Network in Chicago (AAAN). Odeh was a member of the Popular Front for the Liberation of Palestine (PFLP), which is designated as a terrorist organization by the U.S. State Department.

Founded by George Habash in 1967, PFLP became affiliated with Yasser Arafat’s PLO in 1968, and during the next decade conducted several spectacular operations, primarily hijacking international airliners, including the 1976 hijacking of an Air France passenger plane.

Odeh was sentenced to life in prison by an Israeli military court for her membership in an illegal terrorist organization and for planting the explosives used in two 1969 Jerusalem bombings. The first attack, at a grocery store, killed two Hebrew University students and wounded nine others.

The second, which occurred four days later, targeted the British Consulate. After spending 10 years in prison, Odeh was one of 78 terrorists freed (in exchange for one Israeli soldier) in a prisoner swap between Israel and the PFLP. In 2014 she was convicted by a federal jury for immigration fraud after failing to disclose her arrest, conviction and prison time to U.S. border officials.

Odeh, who is based in Chicago, is popular with both Arab and anti-Israel activists. According to Justice4Rasmea.org, since Odeh joined AAAN in 2004, she has managed day-to-day operations of its Arab Women’s Committee, which has a membership of nearly 600. In 2013, Odeh received the “Outstanding Community Leader Award” from the Chicago Cultural Alliance for devoting her time to working with Arab immigrant women, establishing projects related to civil and human rights, social justice and community economic development.

This activism has been a tool for the legitimization of Rasmea Odeh, despite her criminal record in Israel, and has allowed her to interact with a range of communities, and  to rally demands for her acquittal and freedom. Online campaigns and events from Chicago to San Francisco to New York have called on authorities to #FreeRasmea. Odeh is currently free on bail as she appeals her conviction in federal court.

Jewish Voice for Peace is the largest and most influential Jewish anti-Zionist group in the United States. Despite the neutral tone of its name, Jewish Voice for Peace (JVP) works to demonstrate Jewish opposition to the State of Israel and to steer public support away from the Jewish State.

JVP has assumed a particularly visible role in the Boycott, Divestment and Sanctions (BDS) campaign, which has become the most oft-used tactic by the domestic anti-Israel movement in recent years. In the past five years, JVP has significantly expanded, and now has 35 chapters across the country, including a handful on college campuses