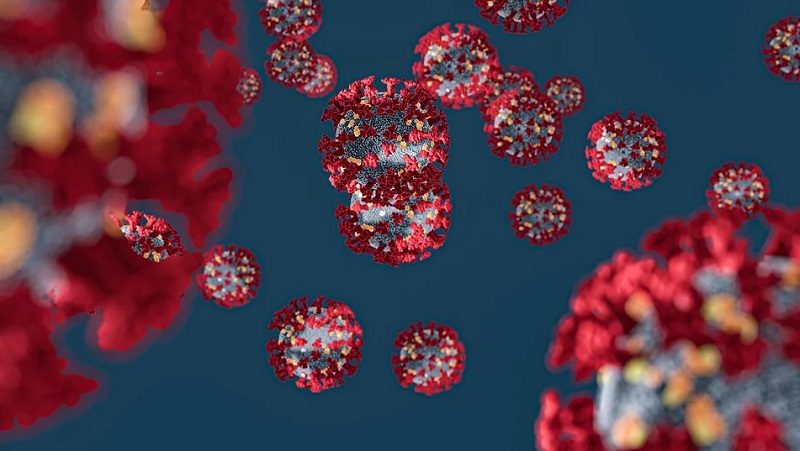 As the coronavirus continues to surge globally, antisemitic, xenophobic, and hateful messages and conspiracy theories are proliferating rapidly online. These messages spread hate and misinformation, making it more difficult to access accurate information while elevating fear and anxiety. While some of these messages are new, many are simply old tropes repackaged for a modern pandemic.

Many antisemitic conspiracy theories posit that Jews have undue global influence and that they manipulate events to expand their power, often citing specific actors like George Soros or the Rothschild family. In recent weeks, there has been a surge in messaging that Jews and/or Israel manufactured or spread the coronavirus to advance their global control. This is trope that can be traced back to at least the 14th century, when Jews were accused of poisoning wells in order to spread the bubonic plague. 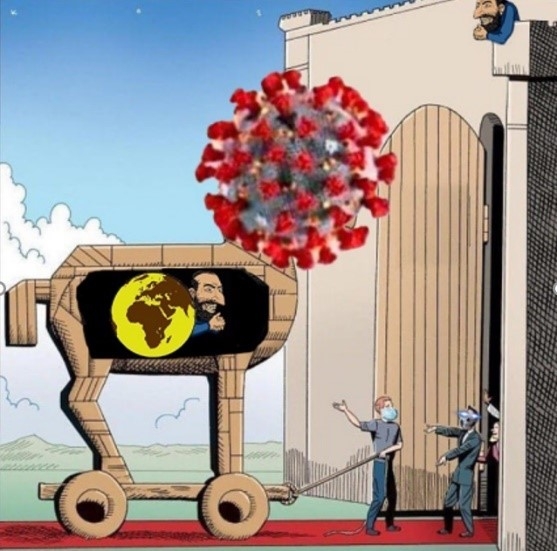 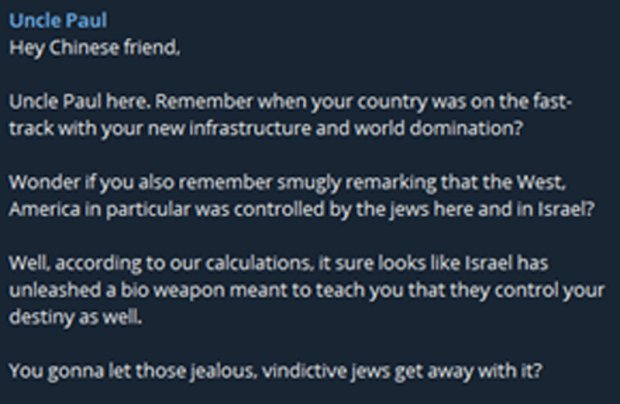 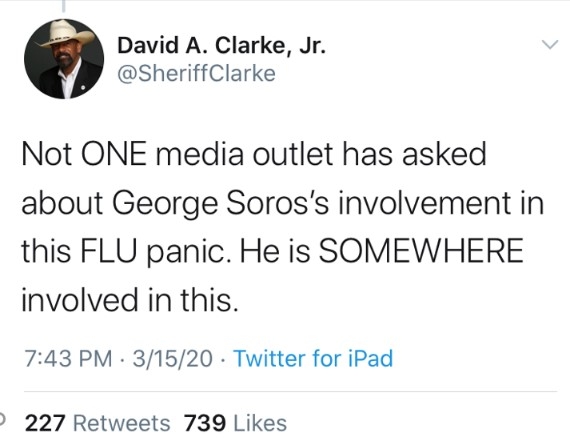 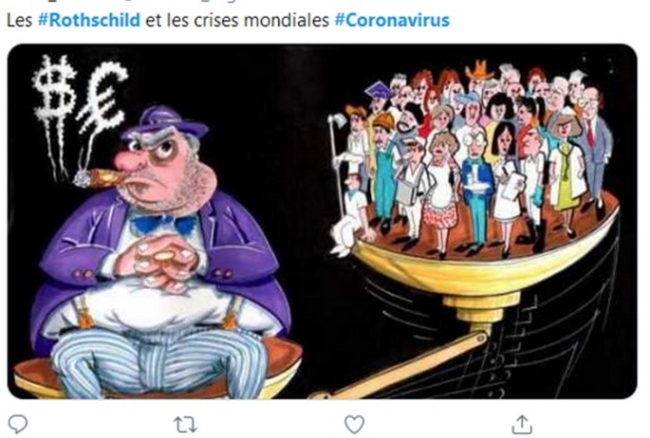 This Twitter post promotes an antisemitic conspiracy related to martial law by claiming that the Federal Emergency Management Agency (FEMA) “is controlled by the Chabad Lubavitch movement.” FEMA has long been a source of fear among those in right-wing circles who believe that the agency will use an emergency to round up Americans into detainment camps.

Jews are profiting from the coronavirus

One of the most prevalent stereotypes about Jews is that they are greedy and value profit above all. From the first days of the coronavirus, antisemites have accused Jews of making money off the virus: from the vaccine, by exploiting market volatility, or through loans. These messages are often accompanied by an image of the “happy merchant,” an antisemitic drawing of a Jewish man with heavily stereotyped features. 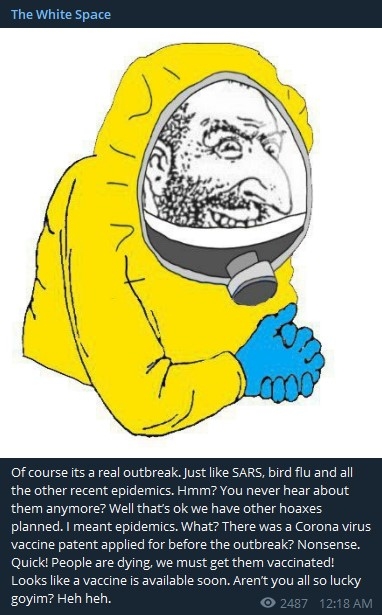 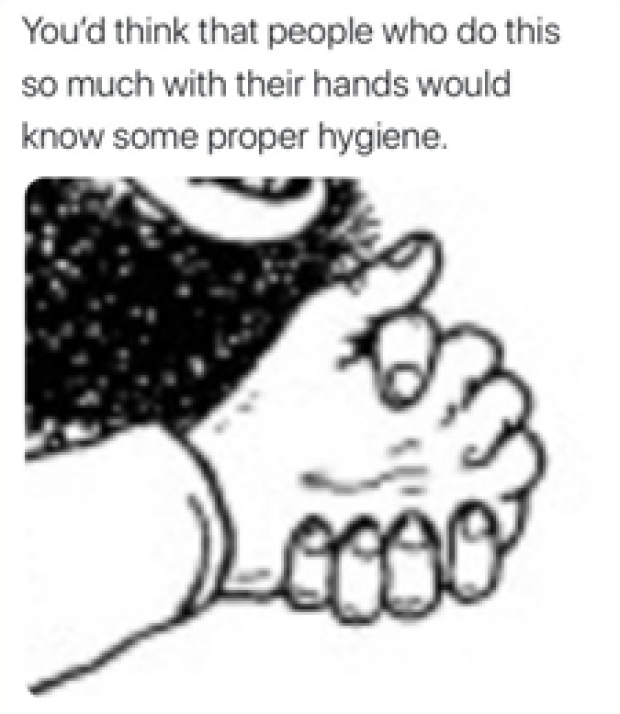 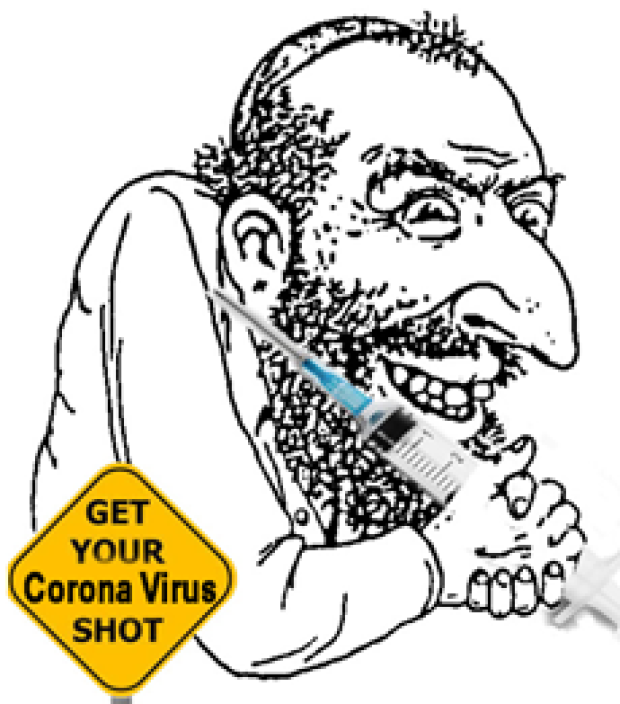 These tweets from February and March suggest that Jews will not only profit from a vaccine but will also exploit desperation by overcharging for it and limiting availability. 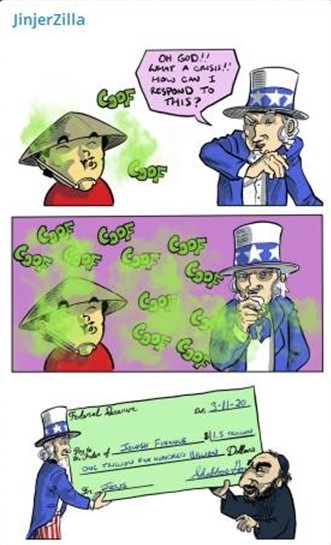 Jews as the real virus

In addition to accusing Jews of purposely spreading the virus, antisemites have portrayed Jews themselves as a virus, simultaneously framing them as malignant and something that needs to be “cured.” 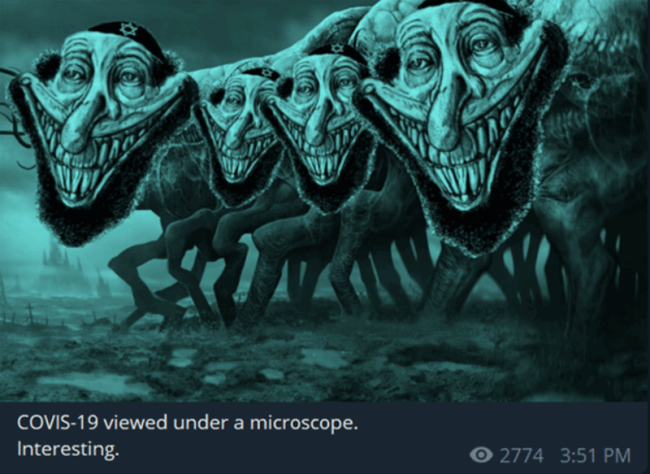 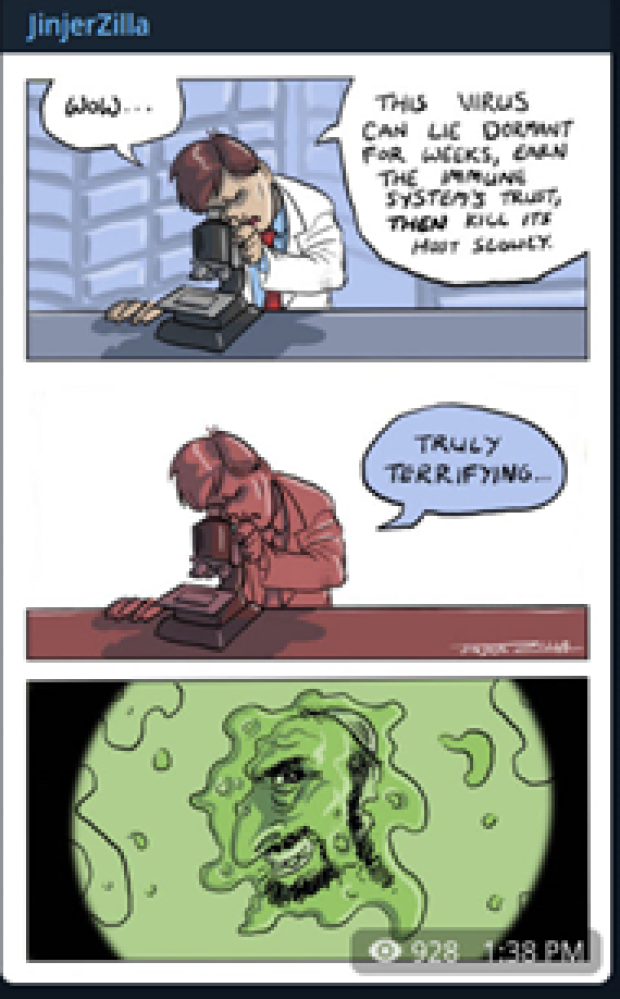 Using the coronavirus to attack the state of Israel

Many of the antisemitic coronavirus-related content being shared online depicts Israel as a malicious actor that has either manufactured or is using the coronavirus to target its enemies. Others are using the virus to criticize the state of Israel’s policies. While these critiques are not inherently antisemitic, some do perpetuate antisemitic tropes. 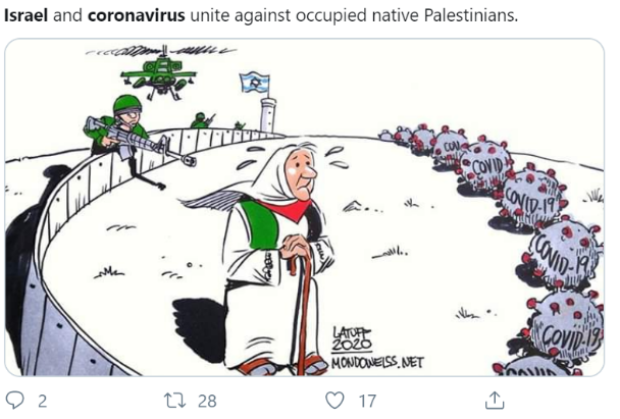 On March 18, this user shared a post in the Facebook group, “Exposing Zionist Puppets Worldwide,” in which they complain that while they don’t have money, Jews are flaunting the money they nominally used to enslave the world. 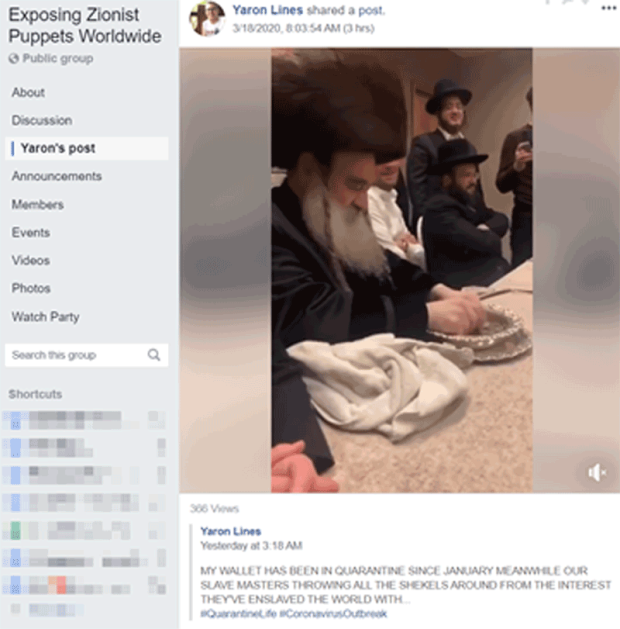 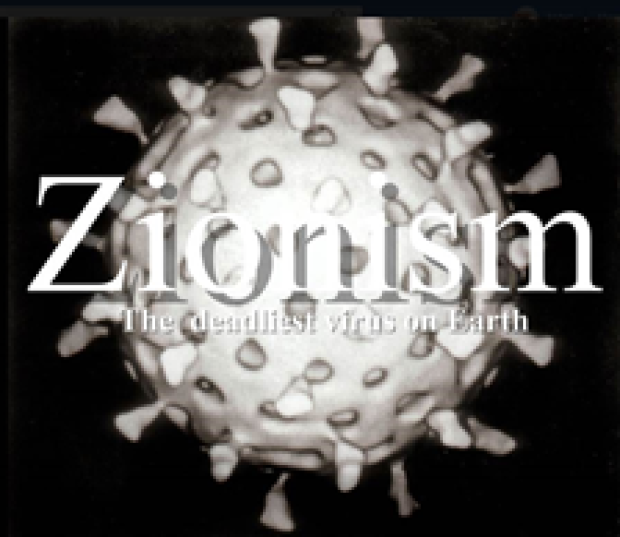 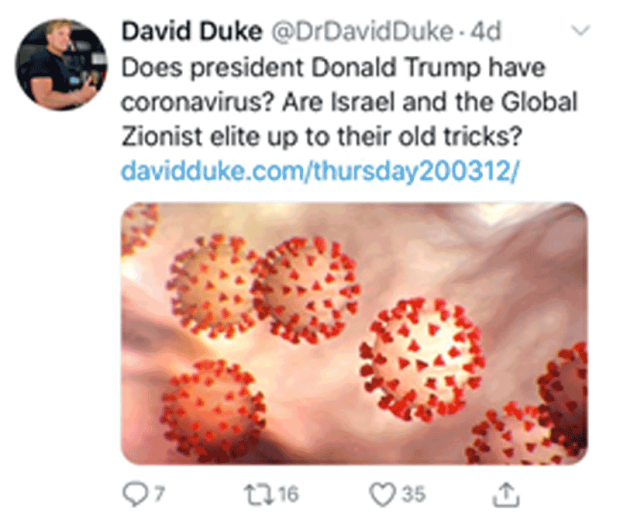 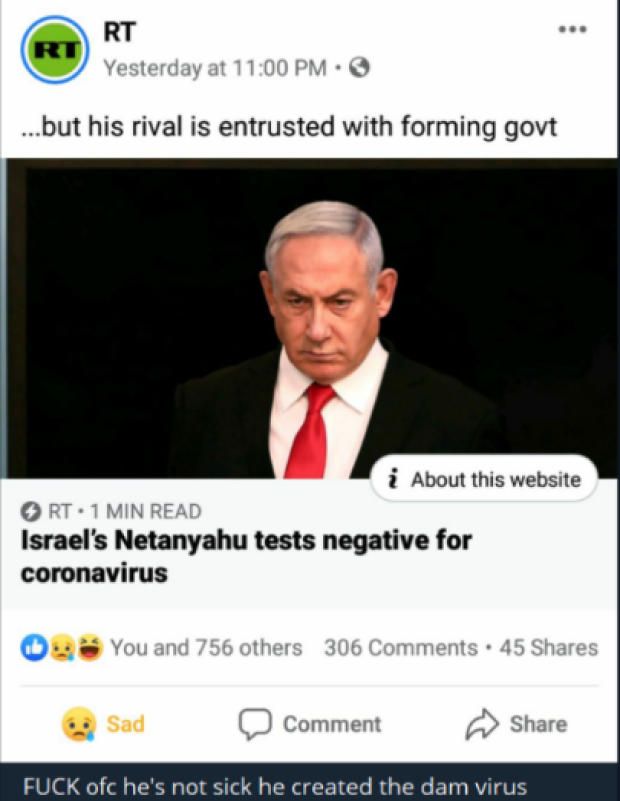 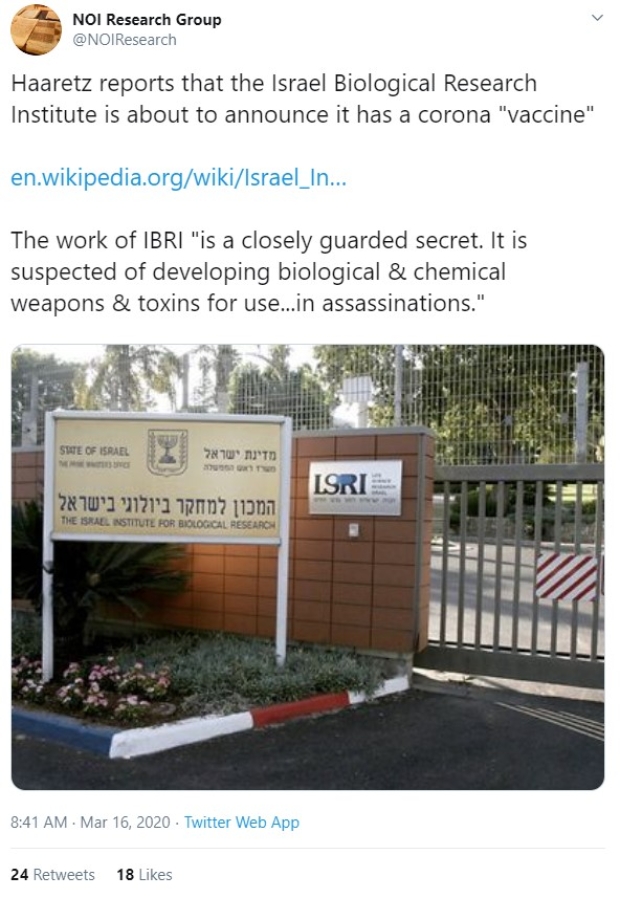 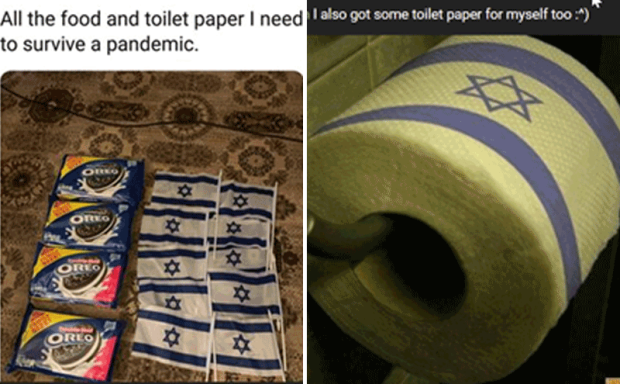 Coronavirus as a means to kill Jews

Many antisemites on 4chan and Telegram are cheering the news of coronavirus cases in Israel, while others are encouraging people to spread the virus among Jewish communities. 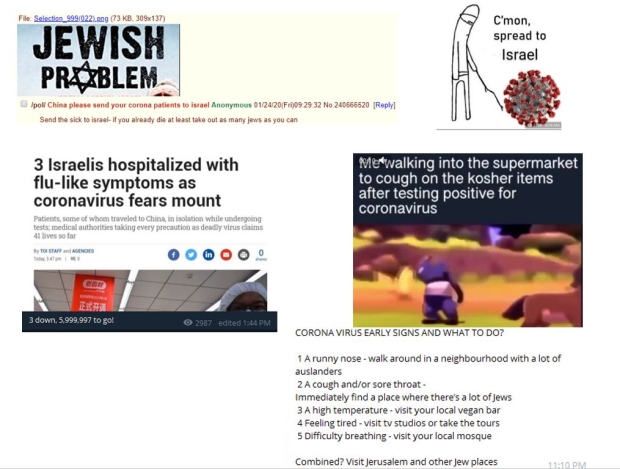 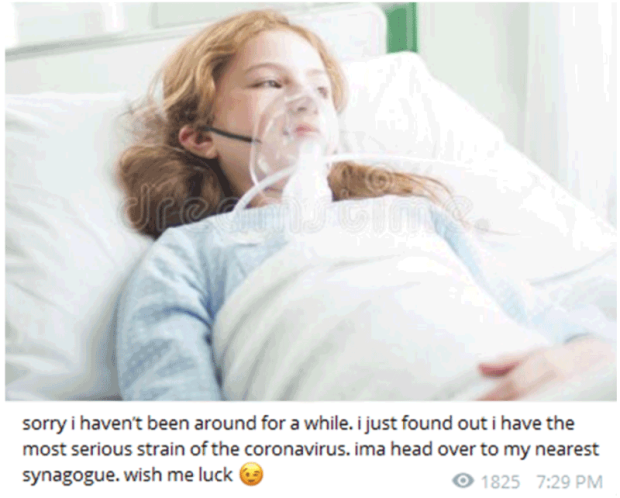 Some extremists on Telegram have tied reports documenting the Chinese and Italy’s difficulty in safely disposing of coronavirus fatalities to cast doubt on the number of Jews who died during the Holocaust.

Many users on social media are sharing bigoted memes and messages that denigrate Chinese people and blame the Chinese for spreading the disease. 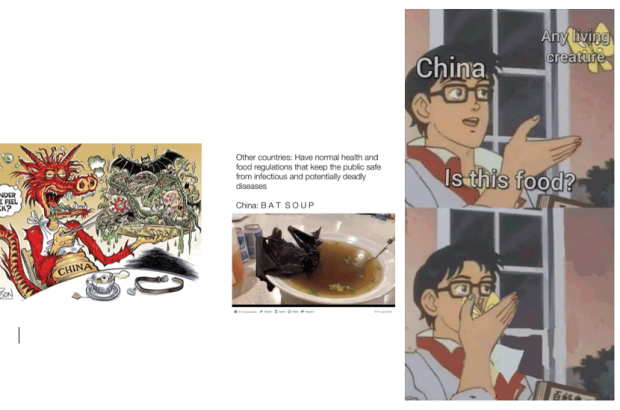 The coronavirus was manufactured by humans

Conspiracy theorists are positing that the coronavirus was manufactured by humans, whether it be as a bioweapon or to make money by selling vaccines. In regards to the bioweapon, the theories differ on who made it, for what end, and whether it was released intentionally or not. 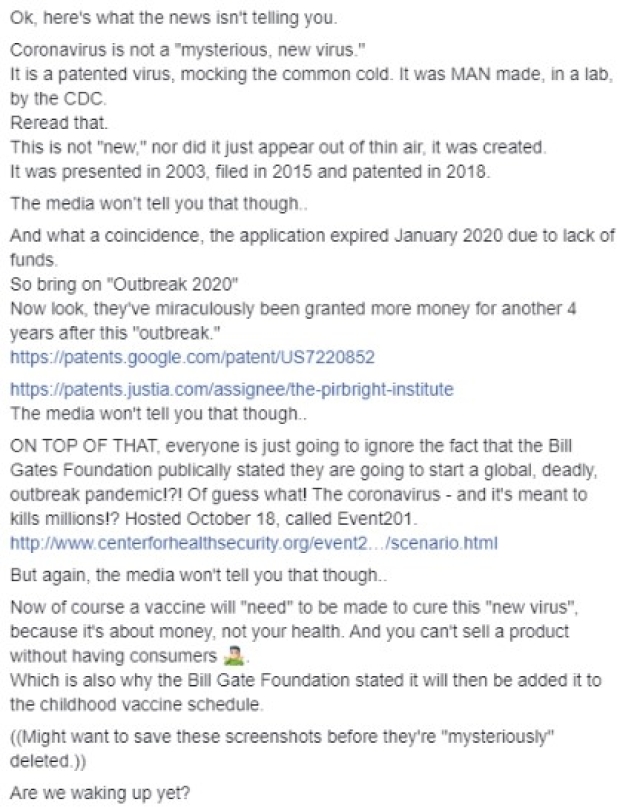 Extremists are imagining weaponizing the coronavirus

Some extremists on fringe platforms have encouraged those who are infected with the coronavirus to target those that these groups consider to be enemies, including law enforcement officials, politicians, and non-whites. 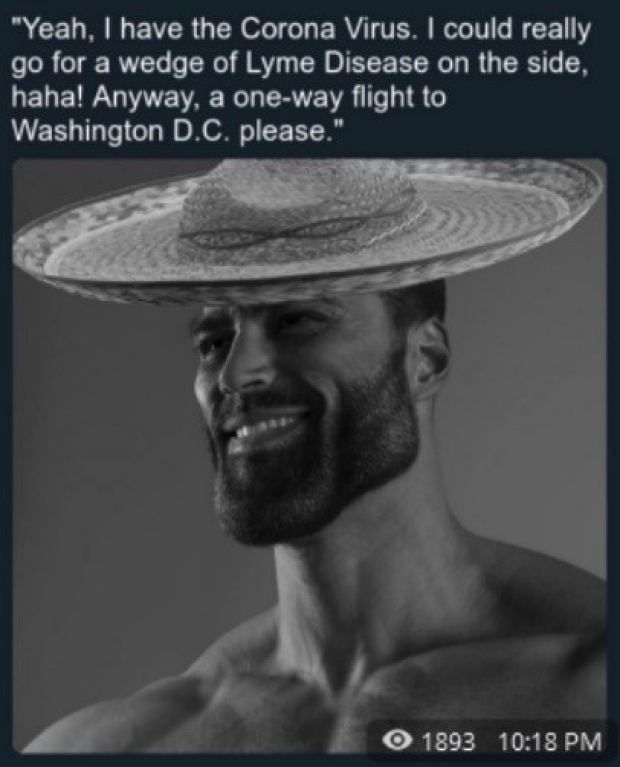 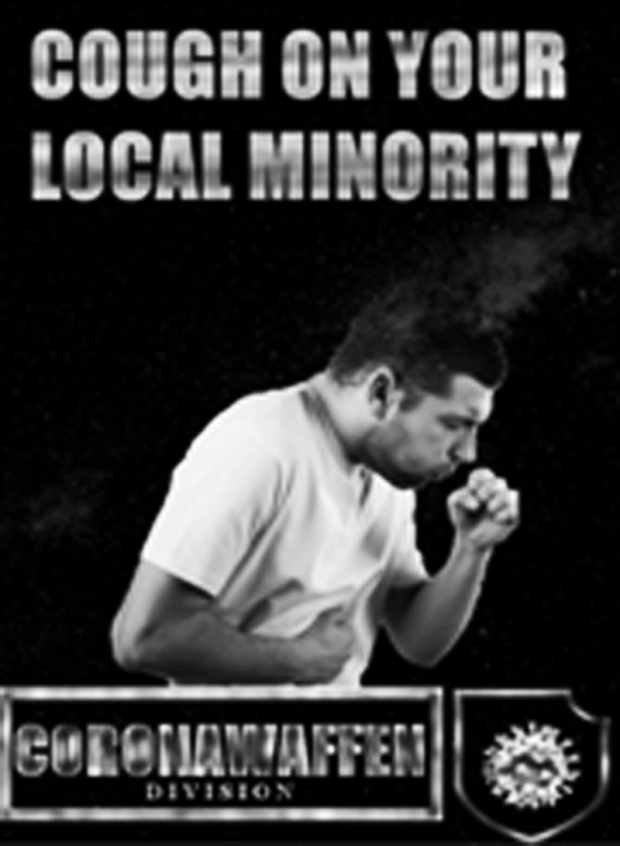 The Coronavirus as the precursor to societal collapse, revolution and the race war

Many conspiracy theorists and far-right extremists believe that rising infection rates, increasing paranoia and “intrusive” government countermeasures to the pandemic will lead to a collapse in society that will lead to – or that they can use to bring about – their version of the Boogaloo, a slang term for a future civil war.

Accelerationists are advocating measures to exacerbate the negative effects of the pandemic in the hopes of spurring parts of the population to violence. The following images demonstrate how they advocate using COVID-19 to spread social unrest. 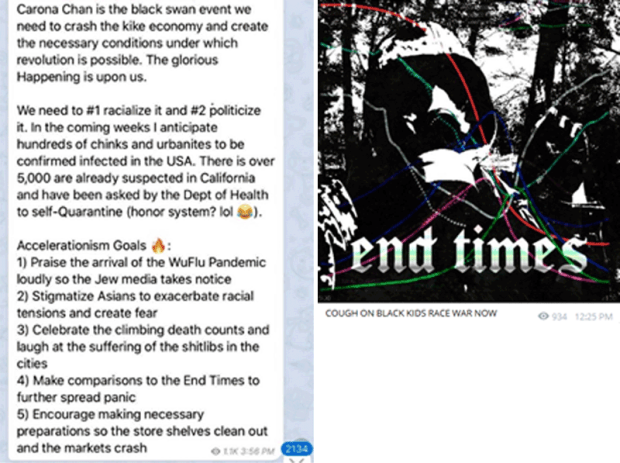 Many extremists on Telegram are explicit in their hopes that the coronavirus sparks the boogaloo, which many believe will create the opportunity to build a white ethno-state. One user on Telegram even referred to the coronavirus as the “achoogaloo.” 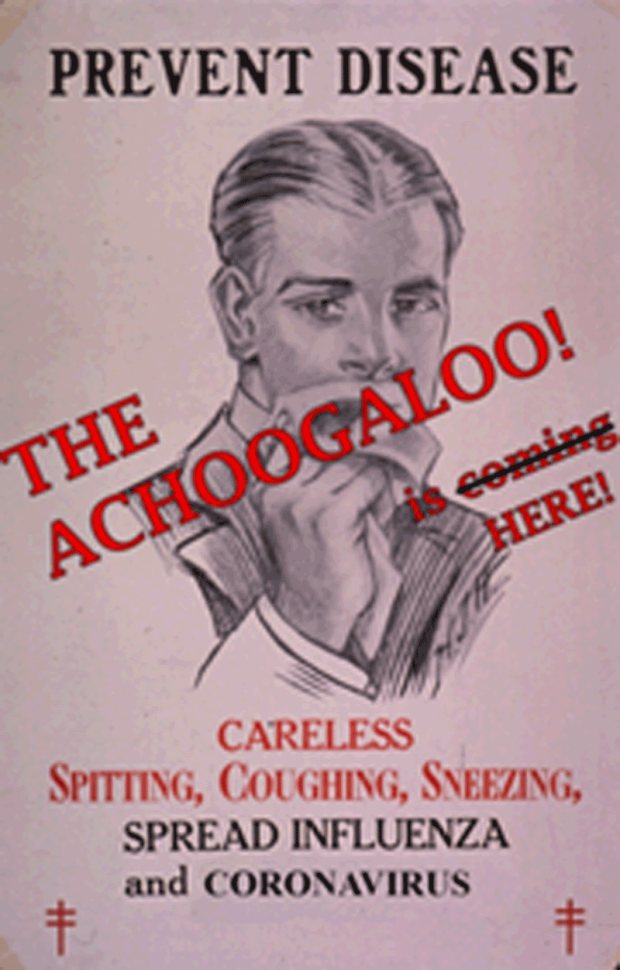 Some are using the coronavirus to argue that the U.S. should restrict immigration by shutting down its borders and instituting a travel ban from foreign countries. While some note actual public health reasons for such measures, others are resorting to bigoted and xenophobic arguments for these policies.

Among certain right-wing conspiracy theorist circles, notably the militia movement, fears of government-imposed martial law, FEMA camps, gun confiscation, and depopulation have been prevalent for decades. Many of these concerns have been updated and applied to the coronavirus.

Some users on social media are attempting to use the coronavirus to advance their homophobic agenda by asserting that the virus is a punishment from God for supporting homosexuality.