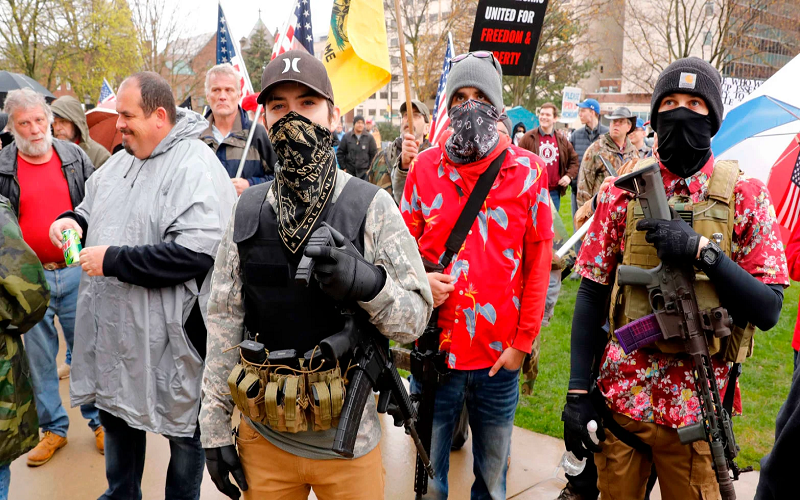 Starting with the April 30, 2020 protest in Lansing, Michigan, a wave of protests against coronavirus restrictions has swept across the country over the past week, with attendees calling for stay-at-home orders to be lifted and state economies to be reopened. While the earliest protests in March were largely organized by extremists, the latest rounds of rallies have been planned primarily by conservative activists, and have drawn extremists and non-extremists alike.

As was the case at recent protest rallies, the late April-early May events drew conservative activists and citizens expressing a range of concerns and fears about the economy and their livelihoods, but also attracted members of extremist organizations, some heavily armed, and featured signs and flags referencing extremist ideologies and conspiracies. It has become clear that extremists view these events as an opportunity to share their dangerous messages.

Extremists and conspiracy theorists often use protests or rallies to spread their beliefs, but the pervasiveness and extensive media coverage of lockdown protests – which actually represent a minority opinion – has created an irresistible public platform.

There is ample evidence of extremists using these rallies to broadcast their beliefs. Members of the Three Percenters, a wing of the anti-government movement, attended events in Michigan, Oregon, Kentucky, Ohio, Illinois and California, while the violence-prone Proud Boys were on hand in Nevada, Oregon and California, and a group of armed “boogaloo” activists, carrying firearms in defiance of state law, showed up in Raleigh, North Carolina. 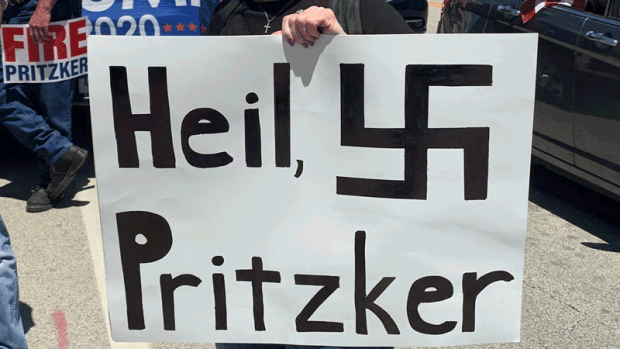 A number of protest signs featured references to anti-vaccine beliefs and QAnon conspiracies, as well as support for the boogaloo – a reference to a future civil war – with signs, patches and Hawaiian shirts. In California, Nevada and Kentucky, protest attendees flashed the “okay” hand gesture, which can have white supremacist connotations. Meanwhile, in Idaho, anti-government extremist Ammon Bundy, best known for his role in the 2016 Malheur standoff, blamed Jews for allowing the Holocaust to happen, while comparing current government restrictions to control the coronavirus outbreak with actions taken by the Nazi regime under Hitler.

Holocaust and Nazi references were also on display. In Illinois, protestors carried signs bearing swastikas directed at Governor J.B. Pritzker, who is Jewish, and one vehicle was emblazoned with the message, “Recall the Fuhrer.” A woman in Chicago held a sign reading, “Arbeit macht frei,” or “Work Sets You Free,” a Nazi slogan that appeared on the gates of Auschwitz and other concentration camps. Similarly, in Michigan, people held signs on April 30 that likened Governor Gretchen Whitmer to a Nazi.

Others decried the “tyrannical” actions of state governments imposing the coronavirus related restrictions. A placard in Kentucky, emblematic of signs across the country read, “Stop Tyranny, Open America.” Protestors in California labelled Governor Gavin Newsom a tyrant; in Illinois, one protestor’s sign referred to Governor Pritzker as Czar; and in Ohio, one speaker led a chant of “Dewine: Tyrant!” in reference to Governor Mike DeWine. In Michigan, some protestors went so far as to threaten violence against Governor Whitmer, with one individual driving a car equipped with a gallows and another holding a sign reading, “Tyrants Get the Rope.”  Labelling government actions as tyrannical is a common tactic among anti-government groups, and using this language in reference to legal directives lets them frame the issue in a way that encourages resistance.

While extremists may be in the minority among actual attendees, these rallies are important opportunities for extremists to connect and develop new networks, and to lay the groundwork for future extremist activity. In certain parts of the country, such as the Pacific Northwest, these networks are already fairly robust – as evidenced by the April 19, 2020, protest in Olympia, Washington, which featured Three Percenters, Proud Boys, members of Patriot Prayer, and was advertised by the Oath Keepers – while elsewhere, these events are fertile ground for networking. For example, on April 25, 2020, the Proud Boys hosted a protest in Orlando that drew just two dozen people, including (according to a Gab post by the group) members of the white supremacist New Jersey European Heritage Association, as well as members of the Three Percenters.

Armed protesters are fairly commonplace at American demonstrations, but the prevalence of heavily (often illegally) armed people at nominally non-violent public protests serves to further normalize the behavior. Against the backdrop of talks of boogaloo, defiance of the state and the demonization of politicians, these weapons deliver an incontrovertible message of intimidation against democratic institutions, and put lawmakers in danger. This was evident on April 30, 2020, when armed individuals and protestors, including members of the Michigan Liberty Militia, stormed the capitol building in Lansing, Michigan.

The presence of firearms at these rallies ratchets up the intensity and creates a potentially dangerous environment. Accelerationists, a subset of white supremacists who are trying to speed society’s collapse, have targeted similar events in the past, including a January 2020 gun-rights rally in Richmond, Virginia.