The American Conservative Union held a Conservative Political Action Conference (CPAC) in Budapest, Hungary, May 19-22, 2022, marking the first time the gathering has been held in Europe. Speakers from both the U.S. and Hungary delivered speeches that referred to America’s “wokeness” and framed a “fight” to save America and the West from “socialism,” liberal democracy and the progressive left.

Hungarian leader and right-wing demagogue Viktor Orban received a hero’s welcome at the conference, which also featured a Hungarian talk show host known for making antisemitic and racist remarks, as well as opening remarks from a Hungarian rabbi. Following the conference, in an apparent effort to distance itself from the bigotry expressed by various speakers, CPAC released a statement condemning antisemitism and racial intolerance.

The conference showed the interconnectedness of American and European far-right thinking, and highlights the conspiratorial, racially-charted rhetoric being shared – and applauded – on both sides of the Atlantic.

In his keynote speech, Hungarian Prime Minister Orban, who recently won re-election, spoke about how he defeated the progressive left in Hungary, and discussed a 12-point plan to promote “Christian conservatism,” with an emphasis on the “traditional family” and the church. Orban told attendees that conservatives “must play by their own rules” and elevate their country’s “national interests.”

Orban, who has promoted the Great Replacement theory in the past, spoke about how he built a wall in 2015 to keep Syrian migrants from entering Hungary. He also criticized the “liberal media,” declared that conservatives should have their own media and praised Fox News host Tucker Carlson, whom he called a “friend,” suggesting Carlson’s show should run 24 hours a day, seven days a week.

Other Hungarian officials also spoke about Hungary’s conservative policies and the country’s focus on traditional family and religious institutions. One speaker, Hungarian talk show host Zsolt Bayer, has a history of bigoted remarks, having previously called Jews “stinking excrement” and Roma “animals.” Bayer has also made racist remarks about Black Lives Matter. After CPAC was criticized for featuring Bayer as a speaker, the American Conservative Union (which organizes CPAC) released a press statement condemning antisemitism and racial intolerance, claiming it was “not possible” for them to screen every speaker.

Speakers and attendees from other nations

In addition to Hungarian right-wing figures, the conference featured leaders of European far-right parties including Tom Van Grieken from the Vlaams Belang Party in Belgium, which promotes Flemish nationalism and has taken xenophobic stances. At one point, the CPAC website indicated that far-right French politician Marine Le Pen was going to speak, but she was apparently removed from the program. 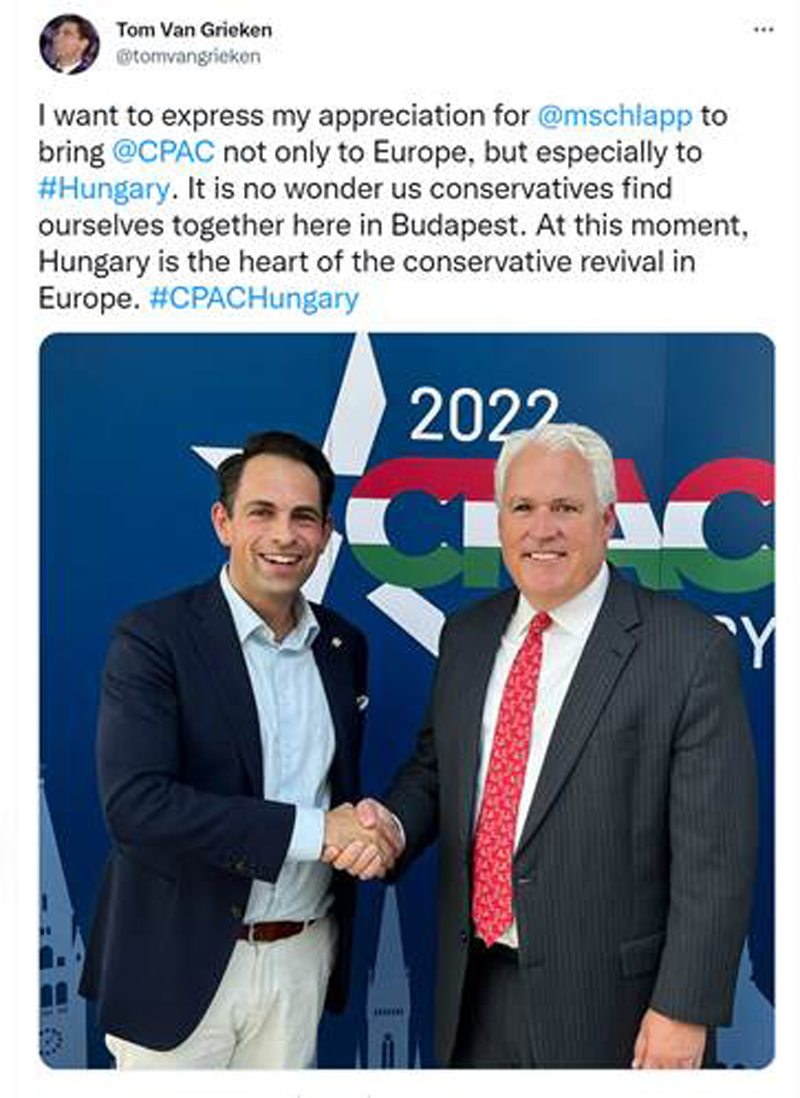 The CPAC conference in Hungary included leaders from far right parties in Europe, including the leader of the Belgian Vlaams Belang, Tom Van Grieken. (Source: Twitter)

South African filmmaker Ernst Roets, who is also the deputy CEO of AfriForum, which defends the rights of Afrikaners and other white South Africans, promoted the idea of “white genocide,” saying, "There's apartheid happening in South Africa" now.” Roets claimed that this time around, white Afrikaners are being victimized by Black citizens.

This is a popular line among white supremacists and right-wing politicians, including former U.S. president Donald Trump, who in 2018 tweeted about the “large scale killing” of white farmers.

American politicians and pundits weigh in

American politicians and pundits also spoke to the crowd via video and in person. Former president Trump, who endorsed Orban in the April 2022 Hungarian elections, sent a video message to the CPAC conference. Trump also invoked “fight” imagery in his comments: “It’s been a fight,” Trump said. “And you [referring to Hungary] had a fight and you’re doing fantastically well and everybody appreciates it.” Trump went on to call Orban “a great leader” who has “done a fantastic job for his country,” adding, “And we’re trying to stop a lot of problems that are going on in the world including in the United States. Socialism and Communism if you look at it deeply.” Trump also alluded to a future scenario in which “we’ll all be together.”

Fox News personality Tucker Carlson, who traveled to Hungary in August 2021 and broadcast some of his shows there, also sent a video message praising Orban and saying that Hungary provides “a signpost” for America. Carlson described Hungary as “a free and decent and beautiful country that cares about its people, their families and the physical landscape.” Like Orban, Carlson has repeatedly promoted the Great Replacement theory and, also like Orban, he criticizes and blames Hungarian-born philanthropist George Soros for promoting liberal policies. In January 2022, Carlson released a pseudo-documentary on Soros, “Hungary vs Soros: The Fight for Civilization,” which streamed on Fox Nation. Carlson, echoing Orban, paints Soros as a globalist with tremendous power who wants to undermine governments in Europe, particularly in Hungary, and change the demographics of Western countries – a clear reference to the Great Replacement.

Other American right-wing speakers attended the conference. According to a report in Salon, Gavin Wax, the president of the New York Republicans Club, also extolled Orban, saying, “America First conservatives demand nothing short of an American Orbanism,” under which they "will establish a form of conservatism that sees the media as the enemy and actually conserves that we hold near and dear. Our national renewal will be preceded by a historic rebuke of not just the soulless Marxist elites of the left, but also the greedy, bloodthirsty neoconservatives and neoliberals of the right….”

In addition to Wax, there were appearances by Jack Posobiec, a right-wing conspiracy theorist and activist and a writer at the right-wing publication Human Events, as well as right-wing activist and media personality Candace Owens. Both Posobiec and Owens spoke about the dangers of socialism and communism. Owens also focused on the importance of “traditional families” and said that kids in the U.S. were being taught they could choose their gender. 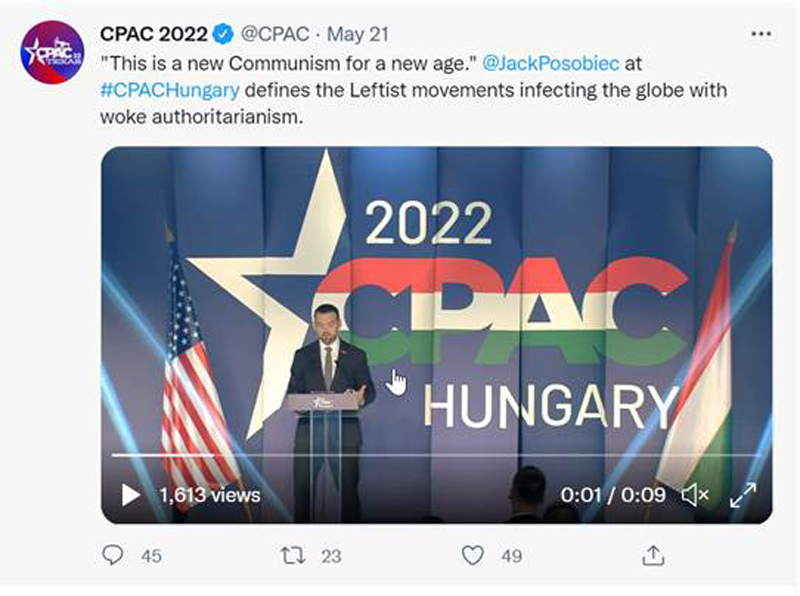 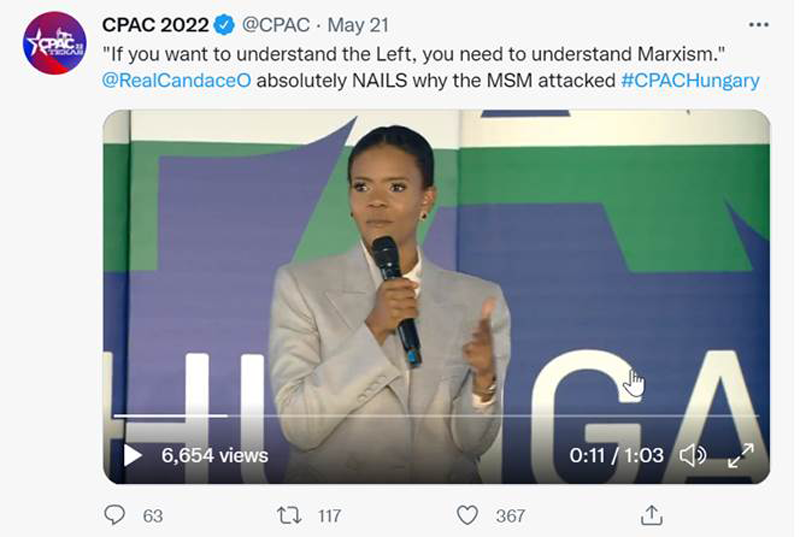 Speakers at the conference celebrated the ties between the U.S. and Hungary. The 2024 presidential election appears to be front of mind for both American conservatives and Orban, who said in his CPAC speech, "2024 will be decisive." Alluding to a battle, Orban said "We need to find friends, and we need to find allies. We need to coordinate the movement of our troops, because we have a big challenge ahead of us."

CPAC will hold its next political conference in June 2022 in Brazil in a show of support for another authoritarian leader, Jorge Bolsonaro. American conservatives have praised Bolsonaro for his populist, right-wing policies.