On his radio show yesterday, white supremacist David Duke celebrated Donald Trump’s victory in Indiana, which made him the presumptive Republican nominee for president. Duke also used the show as yet another opportunity to promote his virulent brand of anti-Semitism, blaming Jewish “neo-cons” for trying to destroy Trump’s candidacy and for allegedly controlling the country.

Duke asserted that “Jewish extremists have made a terribly crazy miscalculation, because all they’re going to be doing by doing a ‘Never Trump’ movement is exposing their alien, their anti-American, anti-American-majority position. … They’re going to push people more into an awareness that the neocons are the problem, that these Jewish supremacists who control our country are the real problem, and the reason why America is not great.” 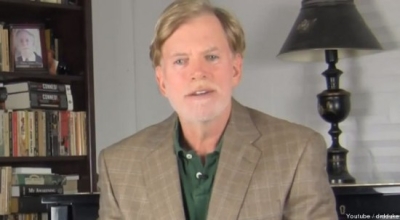 While Duke’s latest anti-Semitic attack was in reaction to Trump’s recent win, he has consistently used Trump’s candidacy as a hook to promote his views that Jews control the government, the banking system and the media. In March, Duke posted a video, “Why the Jewish Elite Hate Trump,” in anticipation of Trump’s appearance before the Jewish organization AIPAC. In that video, he declared that the Jewish establishment is responsible for open border policies that are destroying the “heritage of people whose ancestors created America.”

Duke is not the only anti-Semite who is ardently supporting Trump. A number of anti-Semites believe that Trump’s campaign is implicitly appealing to white America and that his attacks on the media, the establishment and globalism show that he is not beholden to what they see as Jewish interests.

Kevin MacDonald, a notorious anti-Semite, joined Duke on his radio show yesterday to celebrate Trump’s victory. At an earlier conference of the National Policy Institute in March 2016, MacDonald gave a speech about Trump’s candidacy. He blamed Jewish neo-cons for trying to take the Republican presidential nomination from Trump. He declared, “It is no surprise that [Jewish groups] have been hostile to Trump…Such organizations have been in the forefront of promoting a multicultural and non-White America…”

Other anti-Semites have promoted the theory that Jewish Republicans are behind an effort to stop Trump from becoming president. Neo-Nazi Andrew Anglin posted a column yesterday on the Daily Stormer website, “For Jews, Trump Win is Like Another Holocaust.” In it, he wrote, “White men in America and across the planet are partying like it’s 1999 following Trump’s decisive victory over the evil enemies of our race.”

White supremacist Matthew Heimbach crystallized anti-Semites’ view of Trump’s candidacy in October 2015. He said that Trump’s run “could be the stepping stone we need to then radicalize millions of White working and middle class families to the call to truly begin a struggle for Faith, family and folk. For this reason alone I will campaign for Donald Trump because as the saying goes ‘The enemy of my enemy is my friend’ and that is doubly true if that person is viewed as an enemy by the International Jew."