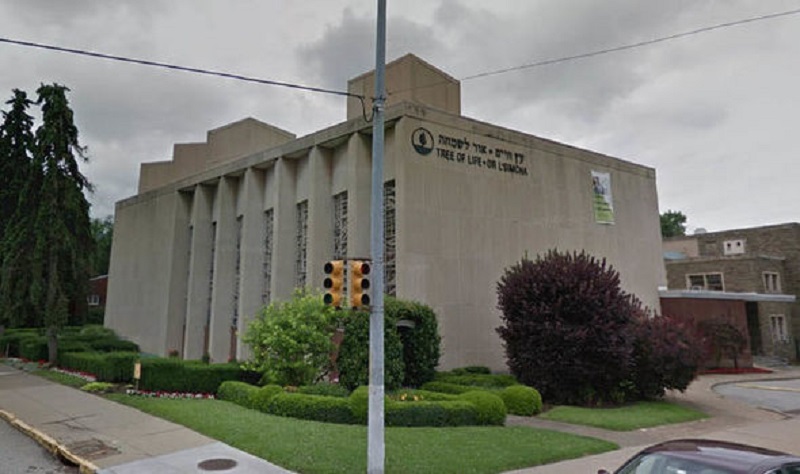 According to police and media reports, Robert Bowers allegedly entered the Tree of Life synagogue in Pittsburgh on Saturday morning, yelling, “All Jews Must Die” as he opened fire. As of Saturday evening, the death toll stood at 11, and several people remained hospitalized.

A profile on Gab – a social media site frequented by right-wing extremists – which appears to belong to Bowers, showcases his virulent anti-Semitism. The vast majority of the posts are anti-Semitic in nature, using language like “Jews are the children of satan,” “kike infestation,” “filthy EVIL jews” and “Stop the Kikes then worry about the Muslims.”  Other posts repeat standard white supremacist slogans, such as “Diversity means chasing down the last white person.”

The main photo on the Gab account is of a digital device showing the number 1488, a combination of two popular white supremacist numeric symbols.

Law enforcement reports that the device shown in the photograph is called a bullet chronograph, used by gun enthusiasts to measure the speed of bullets.

The account’s tagline (by the top photo) reads, “Jews are the children of satan. (john 8:44) --- the lord jesus christ is come in the flesh.”

Below are two of the alleged shooter's apparent Gab posts that include references to ADL and a belief that the organization is one of the Jewish institutions promoting mass immigration. 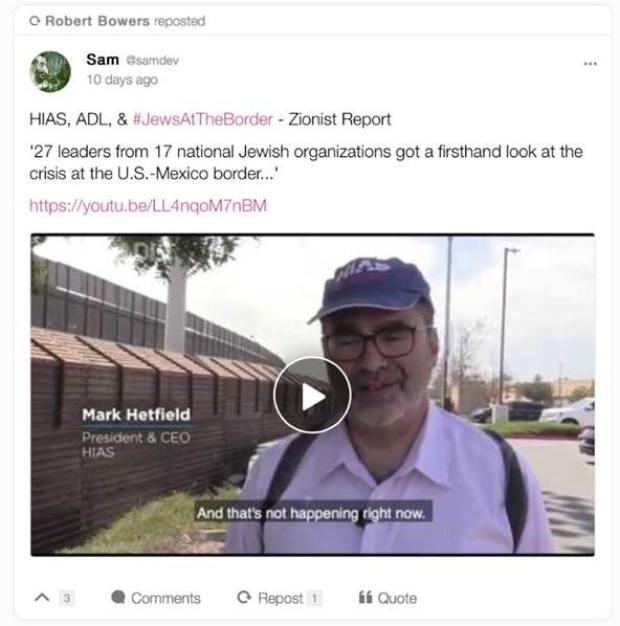 One of the most recent posts (possibly from Saturday morning), criticizes HIAS, the Hebrew Immigrant Aid Society, which has been instrumental in providing aid to refugees. It also echoes anti-immigration language about hordes of murderous “invaders.”  “HIAS likes to bring invaders in that kill our people. I can't sit by and watch my people get slaughtered. Screw your optics, I'm going in."

Our analysis of Bowers' Gab profile reveals more about the language he used online. The following image represents the words that appear in comments Bowers either made and re-posted on Gab from the end of July 2018 to the day of the shooting. The relative size of a word reflects the frequency with which it appeared on his profile. 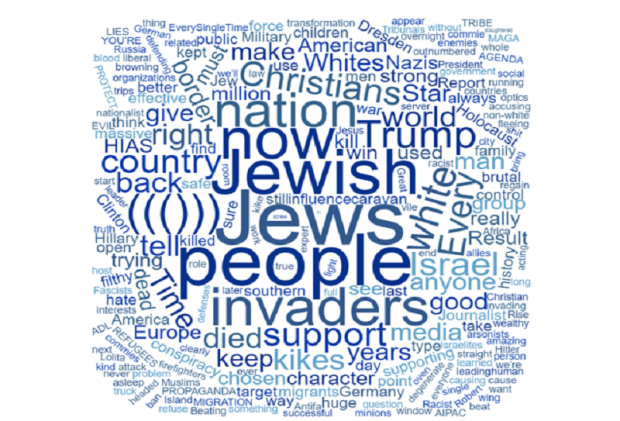 Over the last two decades, white supremacists have targeted the Jewish community in the United States via a range of terrorist acts, conspiracy theories and plots. During that same time, Pittsburgh has seen a number of shootings involving white supremacists. In 2000, Richard Baumhammers went on a shooting spree targeting minorities, including Jews.  In 2009, Richard Poplawski ambushed and murdered three police officers.