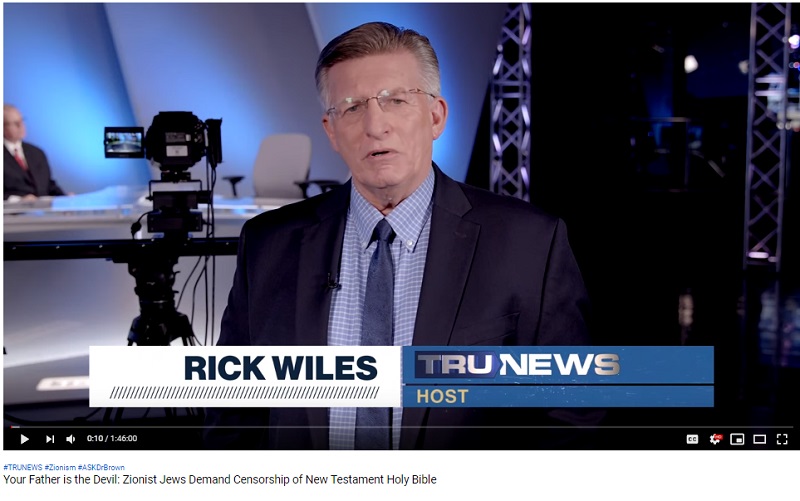 
Update: As of September 4, 21 of the following channels remain active on YouTube.

An analysis by ADL’s Center on Extremism found that a significant number of channels on YouTube’s platform continue to disseminate anti-Semitic and white supremacist content despite the company’s June 2019 crackdown on hate speech.

For years, YouTube has officially prohibited content which promoted or condoned violence or incited hatred against individuals or groups based on core characteristics such as ethnicity, gender and sexual identity, and religion. In June 2019 it updated that policy with specific prohibitions against ideologies like white supremacy, which asserted the superiority of one group in order to justify discriminating against or persecuting other groups. It also added that it prohibited content which denied violent events like the Holocaust or certain mass shootings. ADL called the update “an important step forward,” adding, “This move alone is insufficient and must be followed by many more changes from YouTube and other tech companies to adequately counter the scourge of online hate and extremism."

Following the June 2019 announcement, it appeared that YouTube was taking steps to remove offending content from its service, and several channels that were noteworthy vectors for the dissemination of anti-Semitism appeared to have been shut down. However, subsequent analysis from ADL’s Center on Extremism (COE) found that significant anti-Semitic and white supremacist content continues to be accessible on YouTube even after the policy update. What follows is a sampling of channels that disseminate this content.

The following five anti-Semitic channels promulgate a variety of allegations and tropes which have been used for generations to stoke fear and hatred of Jews. Some of them are overtly Christian, including claims that Jews are aligned with the Antichrist, that they are a blasphemous and evil “synagogue of Satan,” or that they seek to undermine Christian society. Other anti-Semitic allegations are secular in nature and promote the belief that Jews are secret conspirators who control the media, academia, finance, and governments to the detriment of non-Jews. Belief that Jews control the levers of power in societies has been a crucial element of anti-Jewish conspiracy theories throughout modern times. Altogether, the following five anti-Semitic channels have been viewed more than 81 million times. (Note: The white supremacist channels enumerated in the following section also contain anti-Semitic elements.)

This is the official channel of the fundamentalist Christian streaming news and opinion platform TruNews, whose programs routinely feature anti-Semitic content, and which has a long record of disseminating Islamophobic and anti-LGBTQ messages. TruNews founder and host Pastor Rick Wiles has used the YouTube channel to claim that Jews control the media, decimate American culture, and attack Christians. He describes Jews as the “Synagogue of Satan” and as agents of the antichrist. The TruNews YouTube channel has 178,000 subscribers and 17 million views.

Steven Anderson, who leads the New Independent Fundamentalist Baptist Movement from his Faith Word Baptist Church in Tempe, AZ, has a long history of preaching anti-Semitism and anti-LGBTQ messages. He claims that Judaism is a “fraud,” and openly denies the Holocaust.  Pastor Anderson’s YouTube channel has 121,000 subscribers and 61 million views.

Longtime anti-Semite and traditionalist Catholic writer E. Michael Jones uses his YouTube channel and books to promote the idea that Jews are responsible for perpetrating attacks against the Catholic Church, as well as against standards, social stability and global political order. He portrays Judaism as inherently threatening towards Christianity; he also describes Jews as “outlaws and subversives” and claims that Judaism exhibits “a particularly malignant spirit.” E. Michael Jones’ YouTube channel has 37,000 subscribers and 3.5 million views.

Michael A. Hoffman II is a Holocaust denier and anti-Semitic ideologue. In his writings and speeches, Hoffman frequently claims that Judaism condones pedophilia and the hatred of non-Jews. Hoffman’s YouTube channel has 3,600 subscribers and 178,000 views.

This YouTube channel features videos of Nathanael Kapner, a former Jew who converted to the Russian Orthodox faith and is now a “street evangelist” and anti-Semitic provocateur.  Kapner’s videos typically intersperse his conspiratorial, anti-Semitic rhetoric with clips and images from other media. The channel has 86,000 views. (Subscription information is not available for this channel.)

Anti-Semitism is just one iteration of the hate that is easily accessible on YouTube. The following YouTube channels are run by or feature white supremacists, many of whom use the platform to spread their racist, misogynist and anti-Semitic ideology.

This channel contains promotional videos for the Rise Above Movement (RAM). R.A.M. is a white supremacist group based in Southern California whose members believe they are fighting against a “modern world” corrupted by the “destructive cultural influences” of liberals, Jews, Muslims and non-white immigrants. They refer to themselves as the “premier MMA (mixed martial arts) club of the Alt-Right.” The 122 322 YouTube channel has 141 subscribers and 22,001 views.

Alt-Woke features “Radical Agenda” a recurring show hosted by Christopher Cantwell, a belligerent white supremacist podcaster who advocates for a white ethno-state. The Alt-Woke YouTube channel has 1,835 subscribers and 103,602 views.=

America First is a recurring show featuring Nick Fuentes, an alt right personality whose rhetoric focuses on the failure of multiculturalism, immigration and the marginalization of white people. The America First with Nicholas J Fuentes YouTube channel has 38,097 subscribers and 845,643 views.

American Identity Movement (AIM) is a white supremacist group that formed during a rebranding effort by Identity Evropa in March 2019. As AIM, the group has moved away from European-focused rhetoric in favor of advocating for the preservation of “white culture” under the guise of American patriotism. The American Identity Movement YouTube channel has 1,944 subscribers and 39,675 views.

American Renaissance is a white supremacist journal and companion website to The New Century Foundation, a self-styled think tank founded by Jared Taylor. The journal promotes pseudoscientific studies that attempt to demonstrate the intellectual and cultural superiority of whites and publishes articles on the supposed decline of American society because of integrationist social policies. American Renaissance generally avoids the crude bigotry and stereotyping characteristic of many other racist publications and Taylor himself personally refrains from anti-Semitism. The American Renaissance YouTube channel has 113,914 subscribers and 11,886,400 views.

Arktos Media is a small publishing company that features books by white nationalist and translates European Identitarian works into English. The company, which is run by Daniel Friberg, a Swedish businessman and white supremacist who co-founded AltRight.com with Richard Spencer, also has an American chapter. The Arktos YouTube channel has 3,372 subscribers and subscribers and 166,414 views.

Christogenea is the name of a Christian Identity website and blog operated by William Finck of Florida. Finck is also a member of the white supremacist League of the South. The “Christogenea” YouTube channel has 213 subscribers and 2,824 views.

Faith Goldy is a Canadian white supremacist who has promoted the “white genocide” narrative, recited the white supremacist “14 words” on an alt right podcast, and appeared on a podcast of The Daily Stormer, a site run by neo-Nazi Andrew Anglin. The Faith J Goldy YouTube channel has 105,964 subscribers and 6,528,307 views.

The Foundry is a recurring show hosted by William “Tony” Hovater and Matthew Parrott who helped found the now defunct neo-Nazi group the Traditionalist Worker Party. The group’s goal was to build a national socialist ethno-state for white people. Both men attended white supremacist rallies around the country including the 2017 Unite the Right rally in Charlottesville, Virginia. The Foundry YouTube channel has 5,939 subscribers and 7,160 views.

James Allsup is a white supremacist activist associated with the American Identity Movement (formerly Identity Evropa) who is best known for his far-right podcasts and as the former president of a College Republican chapter at Washington State University.  Allsup was a speaker at the May 2019 American Renaissance Conference. He also spoke at the March 2018 Identity Evropa conference and participated in the 2017 Unite the Right rally in Charlottesville, Virginia.

Kenn Daily is hosted by Kenn Gividen of Indianapolis, Indiana, who is the founder of DailyKeen.com and the author of "The Prayer of Hannah" and "Kennisms," a book of offensive/racist quotes known as “Kenn’s Laws.” The channel includes “The Ethnostate” a recurring show hosted by Gividen, William Johnson of AFP and Paul Fromm, a Canadian white supremacist. The Kenn Daily YouTube channel has 44,155 subscribers and 119,434 views.

Patrick Little is an outspoken anti-Semitic politician. In 2018, he made an anti-Semitic campaign run for Dianne Feinstein’s U.S. Senate seat in California. After his crushing defeat, he went on a nationwide “Name the Jew” tour, visiting cities across the country, spewing anti-Semitic propaganda at passers-by. In early 2019, he registered as a presidential candidate with the Republican Party but dropped out of the race in May. In a YouTube video titled “Our Government is just a sham” Little claimed, “At this point it's just about waking people up to who's really in charge and just letting them know that the Jews run stuff. It doesn’t matter who we put into office.” The Little Revolution 2 YouTube channel has 1,420 subscribers and 41,897 views.

NPI/RADIX is the official channel of The National Policy Institute and Radix Journal run by Richard Spencer one of the best-known leaders of the alt right. The “NPI/RADIX” channel has 18,069 subscribers and 583,657 views.

The YouTube channel “PastorEliJames” features Eli James a longtime Christian Identity preacher from Illinois who operates Eurofolk Radio. The channel description reads: “This site is about the history of the Anglo-Saxon (Caucasians, Celts, Eurofolk, etc.) people and our eternal, enemy, the Edomite and Ashkenazi Jews, who are the impostors (Synagogue of Satan) pretending to be Israel.” The PastorEliJames YouTube channel has 1,378 subscribers and 127,920 views.

The Political Cesspool is an overtly racist show on which anti-Semites, white supremacists, and other right-wing extremists regularly appear to voice their views. James Edwards, the show’s founder and main host, is associated with AFP and the Council of Conservative Citizens.

“The Public Space with Jean Francois”

The Public Space is a recurring podcast with Jean-François Gariépy, a French-Canadian alt right YouTuber. The Public Space with Jean Francois YouTube channel has 47,287 subscribers and 4,230,207 views.

This channel features a collection of podcasts featuring alt right propagandist such as Mike “Enoch” Peinovich, Jesse Dunstan (aka Sven/Seventh Son), and Alex McNabb, all of whom who host TRS (TheRightStuff). The TRS Radio YouTube channel has 13,000 subscribers and 1,400,000 views.

Reclaim America is a channel which promotes the Patriot Front, a white supremacist group whose members maintain that their ancestors conquered America and bequeathed it solely to them. They define themselves as American fascists or American nationalists who are focused on preserving America’s identity as one of European-American identity. The Reclaim America YouTube has 1,341 subscribers and 47,585 views.

Red Ice TV is a Sweden-based online media company run by Lana Lokteff, an American born white supremacist, and her husband Henrik Palmgren. Red Ice features online TV and radio shows, including Lokteff’s own “Radio 3Fourteen,” that celebrate “European identity and culture.” Lokteff has interviewed numerous white supremacists on the show. She also co-hosts “Red Ice Live” and "Weekend Warrior" on Red Ice. In May 2017, Lotkeff appeared in a video segment with Jared Taylor of American Renaissance to discuss “the women of the alt right.”

The Occidental Quarterly (TOQ) is a recurring show hosted by James Edwards, who runs the white supremacist radio show, The Political Cesspool, and Kevin MacDonald, a retired professor who runs the anti-Semitic Occidental Observer website. The TOQ LIVE subscriber number is unavailable, but the channel has 42,730 views.