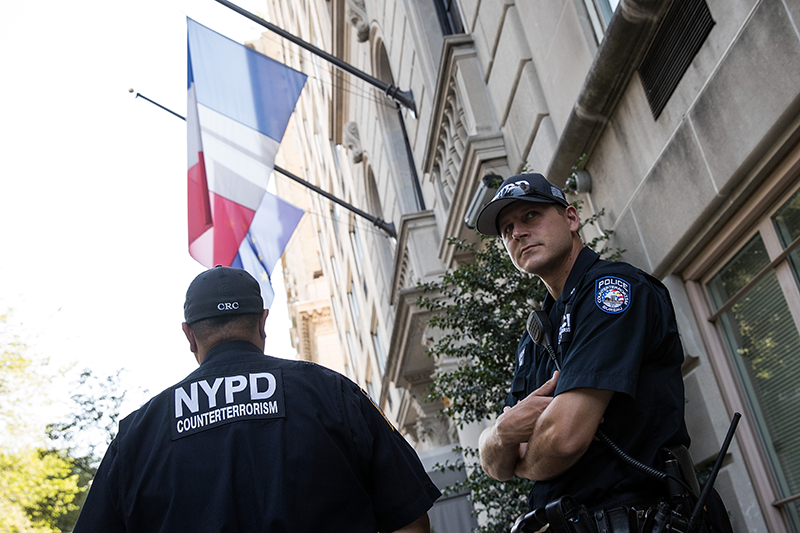 While white supremacists and other right-wing extremists are responsible for most extremist-related domestic murders committed in the past decade, terrorism and violence inspired by Islamist extremism continues to pose a serious threat to Americans. Threat assessments consistently evolve; any known threat is deserving of careful attention.

At the near-midpoint of 2019, Islamist extremism remains a concern. As of June, law enforcement has foiled five Islamist extremist inspired plots in the United States, including a plot to attack federal buildings in Washington D.C., carry out a vehicular ramming at the National Harbor in Maryland, attack a white supremacist rally in California, attack a pro-Israel rally and the Israeli consulate in New York, and detonate explosives in Times Square in New York. Internationally, ISIS successfully planned and executed one of its deadliest attacks to date, killing 253 and injuring 500 more on Easter Sunday in Sri Lanka.

These events underscore that relatively modest attack trends do not mean the threat from any particular extremist ideology can be discounted. As described throughout this report, overall attacks within the United States are down, but the pervasiveness of the ideology makes for a continued threat.

In 2018, ADL documented 13 arrests related to domestic criminal activity motivated by Islamist extremism. Four of the 13 arrests were linked to terror plots. The targets included a high school student’s sleepover, a mall, a July 4th parade, and a synagogue. The remaining nine arrests involved individuals who allegedly attempted to provide material support to foreign terror organizations.

Compared to the 32 people arrested in 2017, the number of individuals arrested for domestic Islamist extremist criminal activity decreased in 2018 by approximately 40 percent. This slowing of activity is certainly notable, but it does not indicate that the threat of Islamist extremism in the United States has subsided. It is worthy of continued vigilance.

Although the Islamic State lost significant territory to Coalition Forces in 2018, and its central propaganda efforts declined significantly, a robust subculture of propagandists inspired by Islamist extremist ideology persist on open-source and encrypted online platforms. This propaganda continues to influence Islamist extremist activity in the United States.

In 2018, two U.S.-based individuals were arrested for using social media to recruit for ISIS. On June 13, 2018, authorities arrested 45-year-old Waheba Issa Dais for hacking into Facebook accounts and using them to spread pro-ISIS propaganda, which encouraged people to join ISIS and build bombs and biological weapons. Similarly, 34-year-old Ashraf al-Safoo was arrested in Chicago on October 19, 2018, for spreading propaganda through a pro-ISIS online channel known as the Khattab Media Foundation. The organization was formed to bolster ISIS’s propaganda efforts, and Safoo, as one of the group’s co-directors, allegedly encouraged people to “help ISIS in any way possible, to include by offering money or themselves.”

In 2018, there was only one U.S. murder motivated by Islamist extremism.

Johnson’s attack was the only deadly Islamist extremist-motivated plot in 2018. However, three additional plots were meticulously planned and may have been inspired by online propaganda; all were foiled by law enforcement.

As Joseph was allegedly planning an ISIS-inspired attack on a Toledo-based synagogue, he referenced Robert Bowers, the white supremacist Pittsburgh shooter, and his violent, anti-Semitic motivations, claiming he admired “what the guy did with the shooting actually,” and that he saw himself carrying out a similar operation.  Joseph’s explicit admiration for the Pittsburgh shooter highlights the link between two diametrically opposed extremist ideologies, and the danger posed by violent, anti-Semitic propaganda online, regardless of its extremist affiliation.

In 2019, three individuals suspected of plotting attacks inspired by Islamist extremism have espoused anti-Semitic ideologies. In January 2019, Hasher Jallal Taheb was charged with planning an attack on the White House with explosives and an anti-tank rocket, having previously discussed targeting a synagogue in Washington D.C. In April 2019, Mark Steven Domingo was arrested for allegedly planning an attack inspired by ISIS and attempting to detonate an improvised explosive device (IED) at a white supremacist rally in Long Beach, California. Domingo, seeking vengeance for the Christchurch shootings, reportedly strongly considered attacking Jews. This arrest is a potent reminder that Brenton Tarrant’s shooting may continue to motivate attacks, and further underscores the anti-Semitism that infects many forms of extremism.

Most recently, in May 2019, 20-year-old Jonathan Xie was arrested in Basking Ridge, New Jersey, for attempting to provide material support to Hamas, lying on his application to join the U.S. Army and threatening to harm pro-Israel supporters. On his Instagram account, Xie claimed he was joining the Army “not to fight foe [sic] Jewish internets[sic] [believed to be a typo of “interests”] …But to learn how to kill.” In further posts, Xie stated that he was “gonna[sic] go to the [expletive] pro-Israel march and [he’s] going to shoot everybody.” Xie’s arrest serves as a  reminder that foreign terror organizations’ hateful ideologies can move Americans to violence. In this case, Hamas’s expressed desire to destroy the state of Israel may have motivated Xie to target pro-Israel supporters in the United States.

The 2018 domestic Islamist extremist landscape was mostly consistent with that of previous years. In the past, women’s involvement in Islamist extremist criminal activity has been less than men’s. Typically, within foreign terror organizations, women have played the role of mothers and supporters— which consists largely of giving birth to and raising the next generation of fighters. However, ISIS in particular has encouraged women to take on more active and violent roles, including traveling abroad and fighting on the group’s behalf, especially as its (male) fighters were either killed in battle or reclaimed by their home countries.

Additionally, of the 13 individuals arrested in 2018, 11 were U.S. citizens (approximately 85 percent), one was a foreign national and one was a lawful permanent or temporary resident. Both non-U.S. citizens were lawfully living in the United States at the time of their arrests. Saudi Arabian citizen Naif Abdulaziz Alfallaj was living in Weatherford, Oklahoma, when he was arrested in February 2018 for making false statements on his visa application and for making false statements to the FBI about attending an Al Qaeda training camp in Afghanistan in late 2000. Similarly, U.S. lawful permanent resident Waheba Issa Dais was arrested for attempting to provide material support to the Islamic State. Originally from Israel, Dais was residing in Cudahy, Wisconsin, at the time of her arrest.

Of note, however, is the shift in stated allegiance of U.S.-based individuals inspired by Islamist extremism. Of the 13 individuals arrested in 2018, four claimed to have been inspired by Al Qaeda, and nine were inspired by ISIS. Though the majority of the arrested individuals were inspired by ISIS, a small few sought inspiration from Al Qaeda instead, which may be explained by ISIS’s steady loss of territory over the course of the year. This is significant when compared to 2017, when ISIS still had territory in Syria and Iraq. Of the 31 individuals arrested for domestic Islamist extremist criminal activity in 2017, only two cited Al Qaeda/its former affiliate, Jabhat al-Nusra, as a source of inspiration.

Although ISIS has lost its territorial stronghold and its recruitment has slowed, the threat of Islamist extremism remains high, as extremists are increasingly looking to other foreign terror groups, like Al Qaeda, for motivation. Moreover, ISIS’s pervasive propaganda continues to radicalize the individuals it reaches online across social media platforms. It is clear from the 2018 arrests that this violent propaganda continues to reach and radicalize U.S.-based Islamist extremists.

As long as Islamist extremist groups persist abroad, and their propaganda infiltrates online platforms, they will be able to indoctrinate users worldwide with violent rhetoric and instruction.