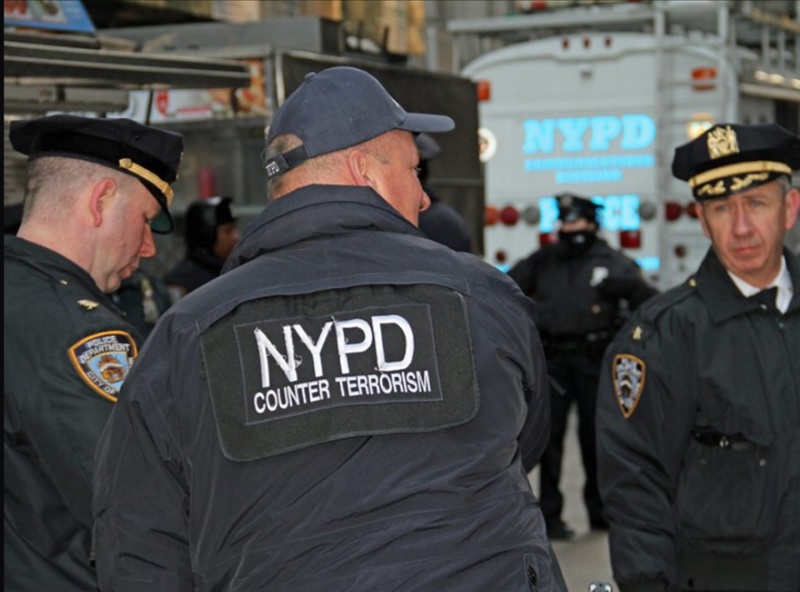 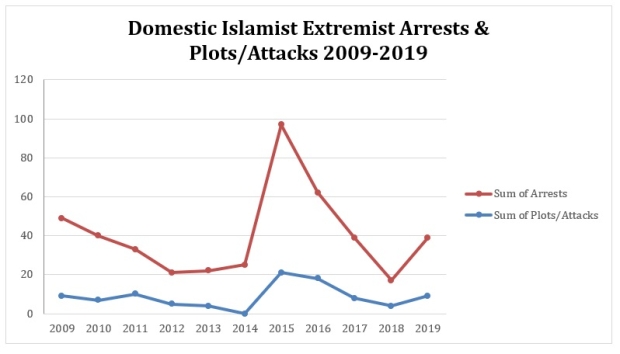 * Note: The “arrests” do not include individuals who were a) deceased or b) detained overseas

The data for Islamist extremist criminal activity in 2019 indicate that modest attack trends do not mean the threat can be discounted. While no physical attacks materialized in 2019, there were nine plots and 30 individuals arrested for engaging in Islamist extremist-inspired criminal activity.  Moreover, a member of the Saudi Arabian military attacked the Naval Air Station in Pensacola, Florida, killing three people and injuring eight others. Law enforcement later found that the attacker, who was part of a Saudi military delegation invited to take part in a US Naval flight training session, was motivated by an Islamist extremist ideology, and he is believed to have been linked to the foreign terror organization al-Qaeda. (ADL does not count this attack by a foreign national visiting the U.S. as a “domestic” Islamist extremist incident and therefore does not include it in the 2019 domestic attack data).

In 2019, ADL documented 30 arrests related to domestic Islamist extremist criminal activity. Nine of these 30 arrests were linked to terror plots targeting pedestrian walkways on the Maryland National Harbor, a white supremacist rally in California, the Israeli consulate in New York City, other tourist attractions in the broader New York area, a Pittsburgh church, and college campuses in Florida. The remaining 21 arrests were primarily linked to charges of providing material support to foreign terror organizations, in addition to a few outlying charges such as knowingly providing false information to law enforcement and illegally receiving firearms with obliterated serial numbers.

For an in depth and continuously updated list of domestic Islamist extremist terror plots and attacks, see ADL’s H.E.A.T map.

In 2019, there were no attacks or murders linked to domestic Islamist extremism. However, nine individuals were arrested for planning attacks. Law enforcement foiled all nine plots.

Extremists have increasingly targeted religious institutions. "In the last several years, America has experienced an increase in targeted violence against our faith-based communities and organizations," DHS Acting Secretary Chad Wolf said in December 2019, summarizing a recent DHS report. While there has been a significant uptick in white supremacist attacks targeting places of worship, including the Charleston church shooting, Pittsburgh Tree of Life Synagogue shooting, and the Poway synagogue shooting, Islamist extremists have also targeted religious institutions. ISIS has shown a particular affinity for this type of attack, and in their most recent large-scale attack, they targeted multiple churches across Sri Lanka on Easter Sunday in April 2019, killing more than 250 people and injuring 500 more. Mousab Alowemer’s June 2019 plot to bomb the Pittsburgh church is reminiscent of this tactic. ISIS’s brutal sectarian violence has targeted religious institutions of many faiths; however, antisemitism has long since been at the core of Islamist extremist ideology.

The 2019 plots demonstrate that extremists continue to prioritize Jews in their attacks. Both Taheb and Domingo explicitly referenced wanting to target Jews and a synagogue in their attacks. Additionally, Jonathan Xie referenced antisemitic tropes while expressing his violent aspirations, claiming he was applying to join the army “not to fight foe[sic] Jewish internets[sic] [likely a typo for interests]…But to learn how to kill.”  These plots serve as a vital reminder of the many threats confronting the Jewish community, and they underscore that foreign terror organizations’ hateful ideologies can move Americans sympathetic to their cause to violence.

In addition to the continued threat that domestic Islamist extremists pose to religious communities, the 2019 data reaffirm that U.S. citizens continue to account for the majority of individuals planning attacks inspired by domestic Islamist extremism—seven of the nine arrested individuals were U.S. citizens (approximately 78%). The remaining two were a lawful permanent resident and a refugee. Like past years, the most significant threat of 2019 appeared to come from individuals residing within United States borders, not from outside them.

In addition to the nine individuals arrested for plotting attacks, 21 others were arrested for engaging in domestic criminal activity motivated by Islamist extremism in 2019. Of those 21 individuals, a large majority faced charges for attempting to provide material support (e.g. by attempting to travel abroad to join a foreign terror group, attempting to provide weaponry to the group, and sharing instructions for attack-planning) to a foreign terror organization, namely ISIS. However, a small number named Lashkar e-Tayyiba, the Taliban, al-Qaeda in the Arabian Peninsula and Hezbollah as their sources of inspiration.

It is notable that approximately 70 percent of domestic Islamist extremist criminal activity in 2019 was inspired by ISIS, which has reportedly lost all of its territory in Iraq and Syria.

The group’s ability to continue inspiring a large percentage of violent activity after it was effectively disbanded demonstrates the lasting influence ISIS’s ideology and propaganda have on Islamist extremist activity in the United States. Moreover, other foreign terror organizations’ influence on Islamist extremist criminal activity indicates that one group’s demise does not denote the decline of the broader ideology. Instead, the threat of Islamist extremism remains high, and so long as the ideology persists, made increasingly widespread through online propaganda, extremists will continue to source their inspiration from violent rhetoric and instruction.