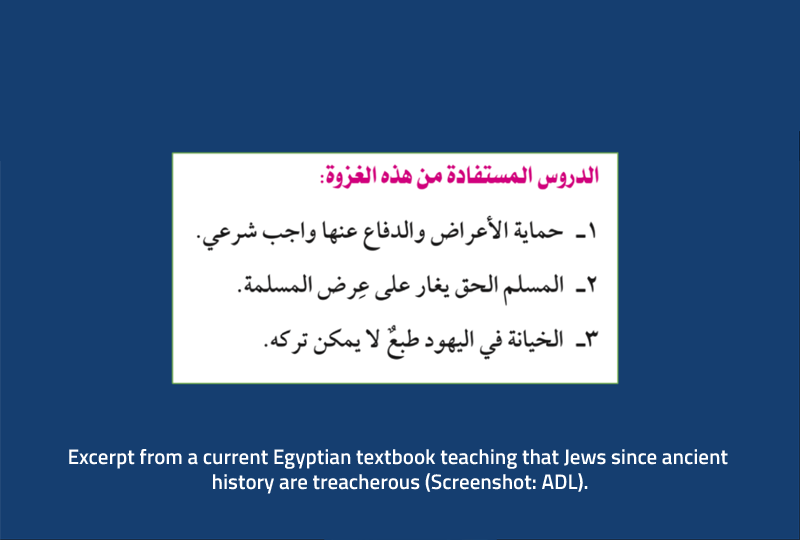 ADL recently completed a review of current Egyptian elementary, middle, and high school textbooks as part of a series of articles examining the state of antisemitic content in state-published Middle East curricula.  Although Egypt’s latest textbooks do contain some positive material about Jewish people, that content is directly contradicted by other, much more problematic lessons in the curriculum.

Egypt is the Arab state with the longest record of peace with Israel and has recently restored some heritage sites related to its historic Jewish community. Its ongoing security cooperation with Israel is critical, and Cairo played an essential role negotiating the ceasefire that brought to an end the most recent two weeks of intense fighting between Israel and Hamas, as it has done in prior conflicts.

As such, it is concerning that Egypt has not invested in greater education regarding Jews, both as a building block to improve its relationship with Israel, as well as providing insights into a community that was an important part of Egyptian heritage.  Instead, we continue to see the persistence of certain lessons teaching anti-Jewish hate.  It is hard to be optimistic about the future of true Arab-Israeli coexistence when Egypt still teaches children that Jews are inherently treacherous and fabricated their ties to Jerusalem.

Why it matters: Egypt’s education system is massive and influential

It is difficult to overstate the importance of Egypt as a case study for the educational direction of the region.  For example, according to U.S. and Egyptian government statistics there are more students in Egypt’s K-12 public school system than the entire populations of the United Arab Emirates, Kuwait, Oman, and Qatar put together, even counting the millions of foreign workers in those four Gulf states.

In addition, Egypt also is home to a separate K-12 school system operated by the country’s al-Azhar religious seminary, which publishes its own school textbooks while enjoying substantial government subsidies.  These Azhari schools reach another 1.7 million children, an amount greater than the entire population of Bahrain (again, including Bahrain’s foreign workers).

Both of these Egyptian school systems claim to have carried out significant curriculum overhauls since 2015 to root out intolerant or extremist messages.  This year, the Minister of Education even bragged that other Arab states “have requested the Egyptian curriculum to apply it.”

Shockingly enough, Egypt’s Islamist critics go so far as to baselessly accuse the Egyptian government of secularizing and even “Judaizing” the country’s curriculum.  But leaving aside such xenophobic fearmongering, it is worth evaluating how Egypt’s latest curriculum actually handles sensitive topics about Jews, Judaism, and the Jewish state, since passages of this sort can offer a window into whether teaching tolerance in the region’s most populous country is likely to succeed or fail.

Egypt’s fifth-grade public school textbook for Islamic Studies teaches students that “the treachery of the Jews” is “one of their traits.”  It goes on to draw a comparison between an incident of sabotage during the 1973 war and a Quranic parable about Jewish tribesmen demolishing their homes before evacuating, telling students the common message is that “the Jews have no pacts, for they betrayed God and his Prophet… and they are like this for eternity.”

This chapter even asks students to search the Quran to collect additional verses “about the treachery of the Jews,” and it concludes with a quiz that asks students to pick from the following options:

“Among the traits of the Jews is: 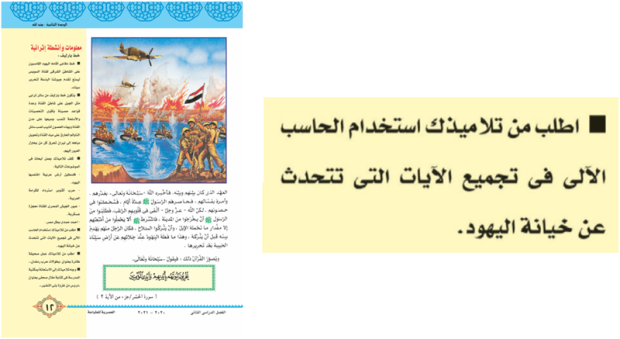 Screenshots from the page in a fifth-grade public-school textbook on Islamic Studies for 2020-2021 which recommends asking students to search for and collect Quranic verses “about the treachery of the Jews."

Similarly, an 11th grade Egyptian state textbook for the 2020-21 academic year on Egypt and Islamic Civilization describes “the Jews” as one of two “internal threats” to the Prophet Muhammad’s early Islamic state.  Likewise, it ascribes collective responsibility to “the Jews” for attempts to kill the Prophet attributed to specific Jewish tribes or individuals.  It includes in this list “an attempt to insert poison” into his meal, even though Egypt’s own semigovernmental fatwa authority teaches that the Jewish woman blamed for this incident is said to have acted alone.

Such a message would seem to suggest that true peace with Jews is fundamentally impossible, yet other lessons in Egypt’s official curriculum argue otherwise.

For example, the Egyptian public-school system's twelfth-grade Islamic Religious Education textbook contains an especially constructive lesson on “Islam and accepting the other.”

It presents the Prophet Muhammad’s conduct in the southern Arabian region of Najran to recommend positive Muslim relations with Christians.  It also proffers an Islamic teaching that the Prophet Muhammad mortgaged his shield to a Jew, extrapolating that he intentionally transacted with a Jew in order to provide “an ideal example, tangibly substantiating the peace and harmony he was calling for, and proving that Islam does not sever Muslims’ relations with their compatriots from other religions.”

That chapter also goes on to cite three additional hadiths attributed to the Prophet Muhammad to show that Islam requires fair treatment of both Christians and Jews, as People of the Book.  They advise that whoever harms a non-Muslim shall earn the Prophet’s own enmity, and that whoever kills or makes certain severe slanders against non-Muslims shall suffer torment in the afterlife.

Many of these same contradictions are also visible in Egypt’s state-backed Azhari system for K-12 education.

For example, a unit on ancient Islamic history in the Azhari curriculum’s current eighth-grade textbook on Fundamentals of Religion cites cooperation between the Prophet Muhammad and Jewish tribes to assert “the permissibility of forging pacts with the People of the Book.”  Yet one of the “applicable lessons” at the end of a chapter just four pages later proclaims broadly that “treachery among the Jews is characteristic that cannot be abandoned.” 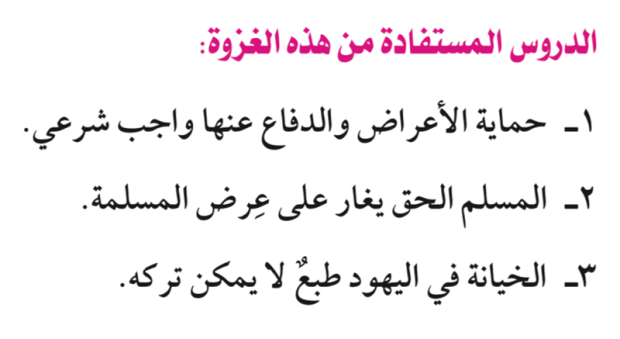 Screenshot from an eighth grade Azhari textbook on Fundamentals of Religion for 2020-2021.  Among the “applicable lessons” supplied at the end of a lesson is that “treachery among the Jews is characteristic that cannot be abandoned.”

On the more positive side, however, is the first section of a ninth grade Azhari textbook on Islamic Culture, which teaches that interfaith tolerance is a fundamental Islamic value.  Stated goals of the unit include the meaning of religious tolerance, reasons for Islam to respect other religions, and “models of the tolerance of Islam with adherents to the Jewish and Christian religions.”

This lesson also teaches that “there is no hating in religion.” It recommends justice in treatment of other religions and cites five examples from scripture to justify fair treatment toward Jews in particular, including in healthcare, as neighbors, in charitable alms, in judicial standing, and in mourning the dead.  In this last regard, the chapter cites a hadith about the Prophet Muhammad standing up to show respect for a Jewish person’s funeral procession, explaining “is he not a human soul?”

Antisemitism and the Arab-Israeli Conflict

For example, the Azhari curriculum’s eleventh grade textbook on Reading and Composition teaches that there are only Christian and Muslim archaeological remains in Jerusalem but not Jewish ones, and that claims of a Jewish temple having stood there are “a fabrication with no historical basis.”  It goes on to inaccurately teach that a 2016 UNESCO resolution about Jerusalem not only “affirmed the rights of Muslims in the city” but also “denied any relationship by the Jews with the city of Jerusalem” or its religious sites.  (Although that UNESCO resolution failed to note Jewish historical ties to the city, it did not deny them).

Rather than note the importance of both sides’ historical and spiritual connection to the land, Egypt’s twelfth grade public school textbook on Modern and Contemporary History of Egypt and the Arabs bluntly states “Palestine is Arab, this is a historical fact” while dismissing “the claim that Israel is a historical fact.”

That same book even blames Jews for causing antisemitism in Europe.  In particular, it teaches that Jews in Europe actually chose to live in ghettos and self-servingly refused to assimilate, and that this is the cause which “escalated the enmity which was between the Jews on one hand and the European Christian peoples on the other.”

It singlehandedly blames Zionist machinations for Jews emigrating from Europe to Mandate Palestine, without mentioning the role that pogroms and the Holocaust played in motivating this trend.  It even spuriously teaches as a historical fact that there was “a plot by the Jews to exterminate the Arabs of Palestine” in the 1940s without sparing even a single sentence to acknowledge the actual genocide perpetrated that decade which exterminated two-thirds of the Jews in Europe.

To its credit, another chapter of this textbook does teach about the Arab-Israeli peace process, discussing its necessity while recognizing “the path remains long toward reaching a permanent final peace agreement.”

It is unfortunate that tens of millions of Egyptian children are still receiving problematic school lessons that may be making this important, shared objective even tougher to reach.

Despite a recent overhaul of Egypt’s public school curriculum as well as the curriculum for Egypt’s state-subsidized al-Azhar school system, the results of that effort fell far short of the task in front of it, and are inconsistent with Egypt’s important role in its foreign and security policies in the region.

If the international community hopes to build truly warm peace between Israel and the most populous Arab state, addressing the biased and inaccurate elements of this curriculum could help.