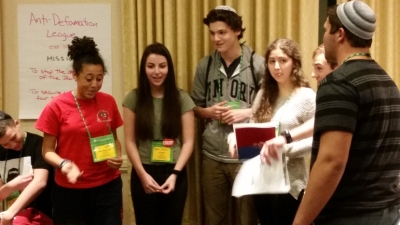 Last week, over 700 Jewish teens from across the United States and Canada gathered in Baltimore, MD as part of United Synagogue Youth’s International Convention.  The Anti-Defamation League participated in the convention as a program partner to educate and empower the students to respond to anti-Semitism. At a time when global anti-Semitism is on the rise, college campuses are rife with anti-Israel bias and Jewish youth regularly hear insensitive comments about Jews and Judaism, this work is more important than ever.

Eighty teens participated in three workshops over the course of two days, sharing their own experiences with anti-Semitism, learning the history behind anti-Semitic stereotypes and myths, and practicing new strategies to respond to anti-Semitism in their everyday lives.  Hearing from their peers around the country, students were able to gain awareness about the prevalence of anti-Semitism.  As one student commented, “I learned that there is more anti-Semitism in schools than I thought there was.”

Students shared stories of pennies being thrown at them, swastikas appearing in their schools and hearing anti-Semitic “jokes” from their peers.  Through interactive exercises, role playing scenarios and conversations with their peers, the students gained strategies to respond and explored what it means for them as Jewish teens to stand up for themselves in the face of anti-Semitism. They also discussed and developed strategies to respond to anti-Semitism as it relates to Israel and talked about how these situations are similar to and different from traditional forms of anti-Semitism.

At the end of the program, the students shared one thing they will do differently as a result of participating in the workshop. Collectively, their responses demonstrate the commitment and power of teens to make a difference in the fight against anti-Semitism:

The workshops drew upon the Anti-Defamation League’s education programming to address anti-Semitism and anti-Israel bias with teens and young adults across the United States.   Since the program was first offered in the 1980’s, ADL has reached over 55,000 teens with knowledge, skills and resources to respond to anti-Semitism.