European Anti-Semitism: Trends to Watch in 9 Countries in 2018 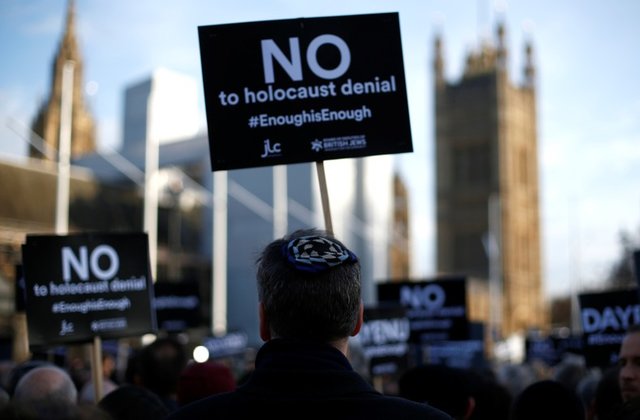 Anti-Semitism is once again a serious concern in Europe. Incidents are rising in several countries. Violent attacks, assaults and vandalism against the French Jewish community are making headlines nearly every day. Earlier this week, Jews in the United Kingdom took to the streets to protest deep-seated anti-Semitism in the Labour Party and the failure of political leaders on the left, including Labour Party leader Jeremy Corbyn, to adequately address their concerns.

ADL also met with a dozen other European Jewish leaders in Jerusalem at the Global Forum for Combating Anti-Semitism, March 19-21, to discuss their situations and how ADL can support Jewish communities in Europe.

France: The French Jewish community of almost 500,000 lives in a state of constant insecurity, despite their government’s good-faith efforts to address anti-Semitic violence.  The recent murder of Mireille Knoll, an 85 year-old Holocaust survivor, was the 11th anti-Semitic murder in France over the past 12 years, a stark contrast to the absence of such crimes in the prior three decades.  Frequent assaults on Jews – on average, twice per week – also drive their sense of insecurity.  In early February, ADL met in Paris with officials in the prime minister's office, responsible for coordinating the government's efforts against anti-Semitism and racism, to discuss ADL’s work on cyberhate, a problem the French government has identified as a major factor in radicalization.  We also met with the head of the Jewish community’s security group to discuss extremism in France and offered our assistance of ADL experts.

Germany: German Jews are worried about anti-Semitism among the new migrant and refugee population, many from Syria and Iraq, and by the rise of the far-right Alternative for Germany (AfD) party, which now holds 13 percent of the parliament and is the third largest party.  In March, ADL met in Berlin with organizations that monitor and combat anti-Semitism in Muslim communities and on the far-right and with senior government officials whose work directly impacts the Jewish community and integration of new immigrants. Recent incidents include the anti-Semitic bullying of Jewish schoolgirl in Berlin by her Muslim classmates.

Poland: In our public statements and private conversations with Polish officials, ADL has condemned the outbreak of anti-Semitic rhetoric on Poland, following the adoption of a libel law on Polish involvement in the Holocaust.  The Polish Jewish community took the extraordinary step on February 19 to issue an open letter, saying “Polish Jews do not feel safe in Poland” due to “the current wave of anti-Semitism [which] arose in response to” the libel law.

Sweden: Synagogues were targeted after President Trump announced U.S. recognition of Jerusalem as Israel’s capital, with Molotov cocktails thrown at the Gothenburg synagogue and an anti-Semitic demonstration held in front of the Malmo synagogue.  Together with Swedish Jewish community representatives, ADL met with the Swedish Police Authority in February to discuss training their officers about extremism.

U.K.:  For the first time in years, British Jewish leaders felt compelled to call a public demonstration to protest the constant stream of anti-Semitic incidents in the Labour Party and the failure of its leader, Jeremy Corbyn, to address anti-Semitism seriously.  Their “Enough is Enough” event was widely covered in British media, and jump-started a serious public conversation about the problem.

Hungary: The Hungarian Jewish community of almost 100,000 has experienced only a few anti-Semitic assaults in recent years, but is concerned about the political atmosphere.  Over the past months, leading up to the April 8 election, political campaigns have featured the Jewish financier George Soros as an enemy of the state, intent on flooding Hungary with Muslim immigrants.  While the billboards and posters do not feature overt anti-Semitic images, Jewish community leaders worry that the campaign appeals to anti-Semitic sentiment in the Hungarian public.  Hungary scored poorly in ADL’s Global 100 survey of anti-Semitic attitudes with a score of 41%, compared to 9% in the US and 25% on average in the European Union.  In March, ADL met Jewish community leaders, extremism researchers, and US Embassy officials.  We made a direct request to a senior official in the prime minister’s office to cease campaigns that feature George Soros.

Iceland and Denmark: The right to circumcise Jewish newborn boys is under threat in Iceland and Denmark. While Iceland is home to just a hundred or so Jews, ADL is deeply concerned that a circumcision ban there could set a precedent in Europe, especially for Denmark, home to 6,000 Jews, where a public petition in parliament is gaining signatures and public support for a ban is around 80%.  ADL submitted a strong letter to the Icelandic Parliament, warning that a ban would not only infringe on religious freedom, but also make Iceland a darling of neo-Nazis and other anti-Semitic bigots, who would see that decision as a step to making Iceland judenrein, free of Jews.

Russia: Following the tragic fire at a shopping mall in Siberia that killed 64 people on March 25, anti-Semitic posts began to appear on Russian social media, suggesting that Jews were responsible and murdered the victims to get blood for Passover matzah, a classic blood libel. Using our social media search capabilities, ADL was able to assess the prevalence of these anti-Semitic posts across multiple platforms and reassure Russian Jewish leaders of the limited presence on Twitter, YouTube, Facebook, and VK (a popular Russian platform similar to Facebook). This came on the heels of remarks by President Vladimir Putin suggesting that Jews and other minorities may have been behind the meddling in the 2016 U.S. elections.