Exposing the Sale of Far-Right Hate on Amazon 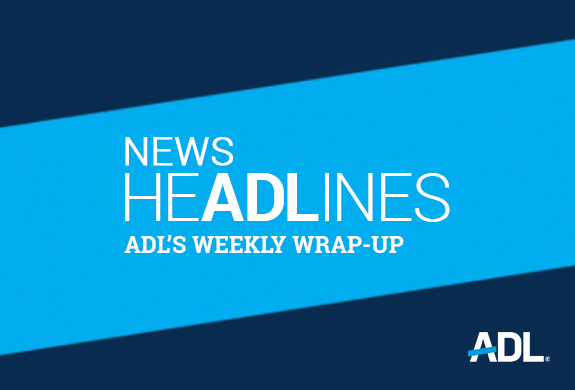 A new report from ADL reveals extremist items, including those promoting white supremacy, are widely available for purchase on Amazon, despite the company’s terms of service against such products. The alleged gunman responsible for killing three at a California food festival promoted a book cited by white supremacists on social media shortly before opening fire. The NonProfit Times is out with their annual “Power and Influence Top 50,” featuring a familiar face.

Read on for more on these headlines, news you can use to fight hate, and the latest info about ADL from around the country.

“A recent search of Amazon by experts in the civil rights group’s Center on Extremism had demonstrated that ‘items and merchandise promoting right-wing extremist ideologies, including white supremacy and the anti-government militia movement, are still being offered for sale by various third-party sellers.’” Algemeiner:
READ MORE

“According to extremism researchers, the manifesto is part of a collection of white nationalist literature that’s been pirated and distributed for free on far-right websites. The material is part of a yearslong recruiting technique by white nationalists to target those vulnerable to their message on forums frequently populated by teenagers.” NBC News:
FULL STORY

“While leaders at other anti-hate groups are being marginalized or fired, Greenblatt remains a fearless advocate for blocking hate speech on every platform. It’s not by accident social networks are scrubbing their sites and corporations are holding anti-bias training.” The NonProfit Times:
LEARN MORE

•    ‘Disgusted by Trump,’ Baltimore Jews Defend Longtime Ally Elijah Cummings (Haaretz)
•    Study Reveals 79% of ‘Dota 2’ Players Have Been Harassed in Game (Forbes)
•    American Jews Are Asking: Is It Safe to Pray in Synagogue? (The Jerusalem Post)

To get Headlines in your inbox every Thursday, subscribe to this free ADL newsletter today.