In the weeks leading up to the 2020 presidential election, the ADL (Anti-Defamation League) Center on Extremism in conjunction with ADL’s Center for Technology and Society is releasing a series of news briefs on topics of concern regarding the role extremists and extremism more broadly are playing in our current political environment. 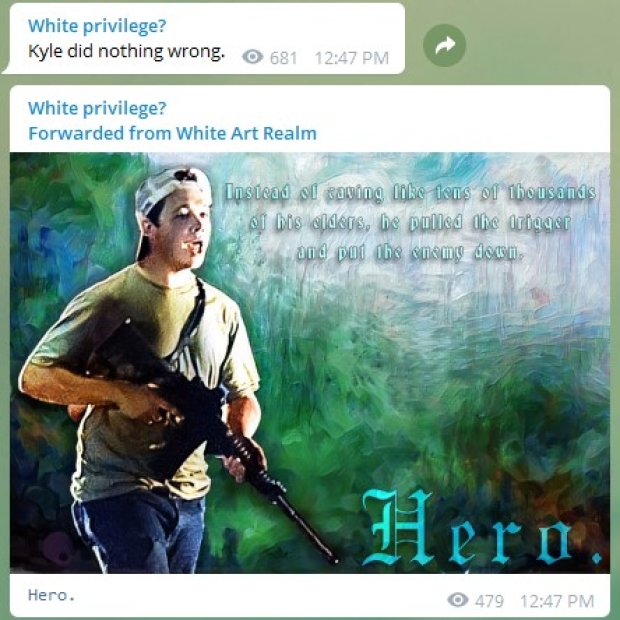 Why it Matters: Glorification of murder in any form sets a dangerous tone and precedent in a country already on edge

As the 2020 presidential election draws closer, tensions across the United States continue to rise. In the midst of this enmity, some on the right, including the President, are fanning those flames of division, elevating extremist groups like the Proud Boys, while defending (and even praising) a white 17-year-old who is charged with murdering two men during a social justice protest in Kenosha, Wisconsin. This is the latest in a series of pieces examining the landscape of American extremist rhetoric in the lead up to the election.

Kyle Rittenhouse has not been linked to any formal extremist group, but that has not stopped a wide spectrum of right-wing groups and individuals from lionizing the 17-year old, who is charged with murdering two men during a protest over the police shooting of Jacob Blake, a 29 year old Black man --– and even encouraging others to follow his example.

As tensions across the United States continue to rise following a summer of protest and in advance of the 2020 election, the embrace and glorification by many on the far right, and some in mainstream right wing circles, of an individual who is accused of killing two people at the August 25, 2020 protest, and is facing several charges – including first-degree intentional homicide, reckless homicide and attempted homicide – is a dangerous development.

Across mainstream social media platforms, right-wing posters argue, echoing Rittenhouse’s defense attorney, that Rittenhouse’s actions were justified because he was only there “to help,” and that he was acting solely in self-defense. Like Rittenhouse’s attorney, they reframe his victims as the aggressors, elevating the unproven narrative that he was bravely facing down an angry mob alone. Many supporters assert that his only goal that night was to “protect his community,” despite the fact that Rittenhouse lives in Antioch, Illinois, a 30-minute drive from Kenosha.

Fox News host Tucker Carlson appeared to applaud Rittenhouse on his August 26, 2020, show, saying, “How shocked are we that 17-year-olds with rifles decided they had to maintain order when no one else would?”

Rittenhouse’s attorney sang his client’s praises in a now-deleted September tweet, as reported by the Associated Press. “Kyle Rittenhouse will go down in American history alongside that brave unknown patriot who fired ‘The Shot Heard Round the World,’” lead attorney John Pierce wrote. “A Second American Revolution against Tyranny has begun.”

Republican lobbyist and former Florida Attorney General Pam Bondi, appearing on Sean Hannity’s FOX News show on September 22, 2020, praised Rittenhouse as a “little boy” who was “trying to protect his community.” She added that Rittenhouse was trying “to provide aid to other people who were getting injured by these rioters.”

Other right-wing figureheads have chimed in with praise for Rittenhouse. Ann Coulter tweeted back that she wanted the teen to be “my president.” Aubrey Huff, a former baseball player for the San Francisco Giants, hailed him as a “national treasure.”

The second way supporters seek to exonerate Rittenhouse is to highlight the victims’ alleged criminal histories, implying that Rittenhouse was in more danger in the moment, and arguing that their histories made the victims legitimate targets. As one white supremacist wrote on Telegram, “Kyle took out the trash.” 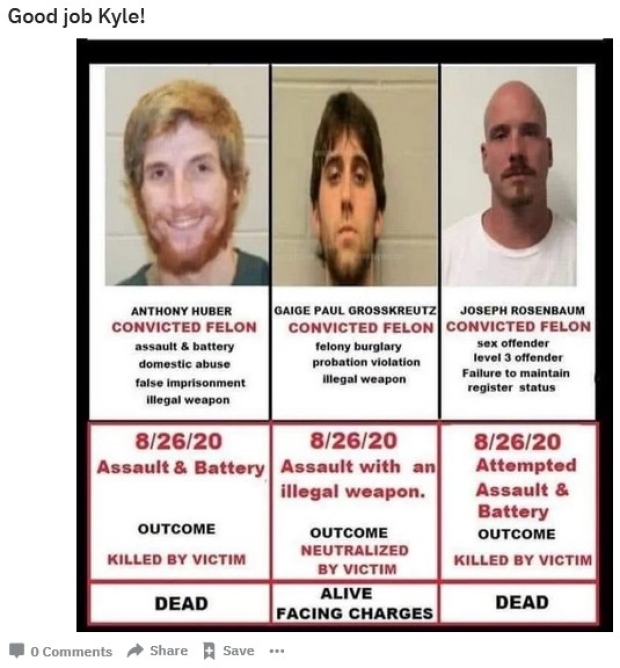 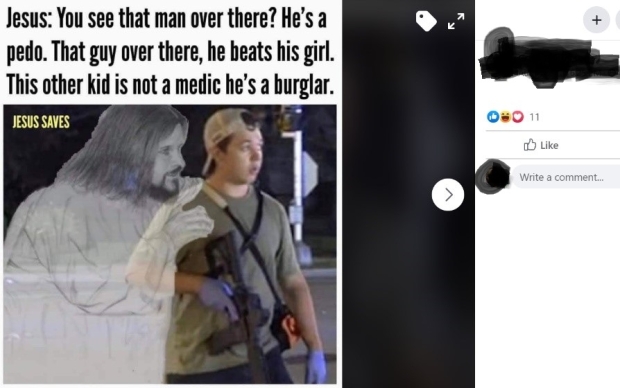 Some go beyond justifying Rittenhouse’s actions, and label him a hero. A poster in a right-wing group shared a meme of Rittenhouse that read, “This courageous young Patriot deserves a medal, not a court date.” Another user in a different right-wing group wrote, “I hope that I’m never in a predicament that Kyle Rittenhouse was in! But, if I was, it probably would’ve had the same outcome!”

At a September 26, 2020, rally in Portland, Oregon, members of the Proud Boys wore shirts that read, “Kyle Did Nothing Wrong” on the front, and “The tree of liberty must be refreshed from time to time with the blood of commies” on the back. The text on the front is a nod to the white supremacist refrain “Hitler Did Nothing Wrong,” and Proud Boys favorite, “Pinochet Did Nothing Wrong.” The text on the back references a Thomas Jefferson quote, popular with anti-government militias and white supremacists, in which “patriots and tyrants” take the place of “commies.” 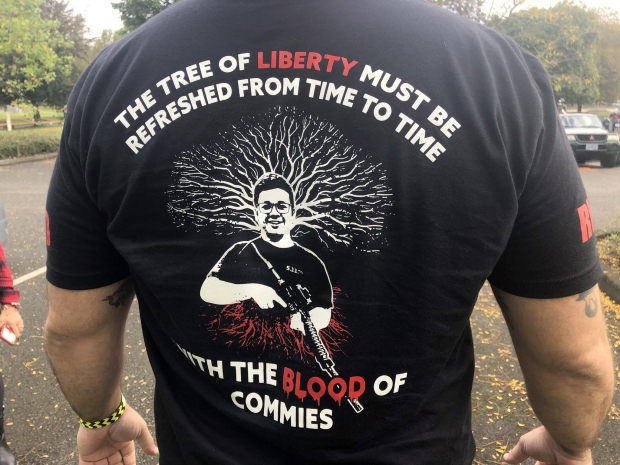 Others shared images of Rittenhouse surrounded by genuflecting superheroes, and superimposed Rittenhouse’s face over clips of Avengers characters, including Captain America and Iron Man.

Rittenhouse is presented as a right-wing warrior who took down left-wing enemies of the United States. This framing celebrates Rittenhouse’s vigilantism, creating a dangerous precedent by glorifying those who take law enforcement matters into their own hands.

As Dylan Stevens, who uses the moniker “The Angry Viking” and leads a right-wing pro-gun and pro-police group, said in a video shared to YouTube on September 16: “This is the country that the far left wants…They want us constantly living in fear and not being able to defend ourselves against the criminals and thugs. And Kyle Rittenhouse said, ‘screw that shit’ and to me he’s an absolute hero. The kid should be getting a medal and a sit down with the President, not sitting in some juvenile detention center.”

Another individual wrote in a right-wing Facebook group: “Kyle was able to, and did, defend himself and others…He did not institute aggression, but merely defended himself from aggression by the same people seeking to destroy property and the U.S. He is a hero in the 2020 rebellion and deserves a statue.”

Several memes echo this theme of a conflict with the left and tried to discount Rittenhouse’s victims by labeling them as “communists” who deserved to die.  Similarly, one white supremacist shared a song justifying Rittenhouse’s actions; it included the line, “Do you see a downpour of n****rs and anti-fascists with Molotovs who destroy our city?” 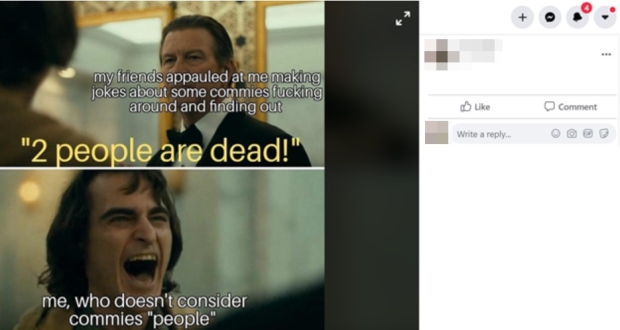 Though most of the support for Rittenhouse does not explicitly advocate for violence, some have used the hashtag #kylewasright, showing their support for Rittenhouse and his actions, and apparently condoning his violent behavior, tacitly encouraging others to act in a similar way. Though there is no evidence that Rittenhouse subscribes to a white supremacist ideology, the use of the phrase “Kyle was right” has been adopted by white supremacist groups like Revolt Through Tradition and the International Conservative Community, who have hung banners and distributed fliers to reflect this claim. 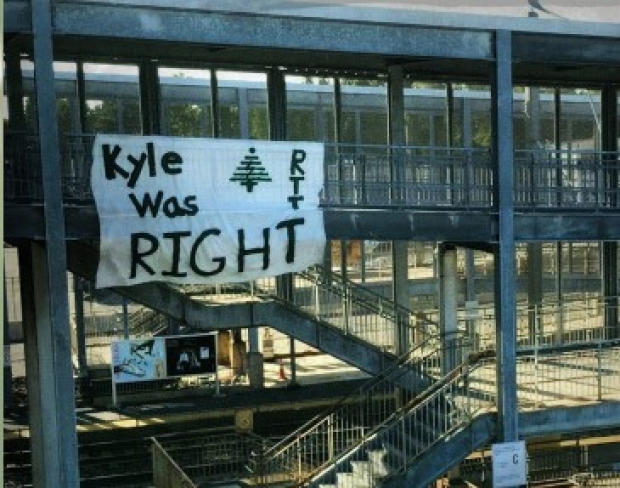 Some even encourage others to follow Rittenhouse’s example. One meme shared on the sub-Reddit “FreeKyleRittenhouse” describes the “Kenosha Mile Challenge,” which includes a list of Rittenhouse’s actions and implicitly urges others to follow suit. On Telegram, one user shared a meme featuring Rittenhouse standing with a gun in front of a white supremacist Sonnenrad symbol and  the caption “Mow Down BLM Scum.” Another responded to coverage of protestors disrupting diners at a restaurant in Rochester, New York by writing, “Where’s Kyle when you need him?” 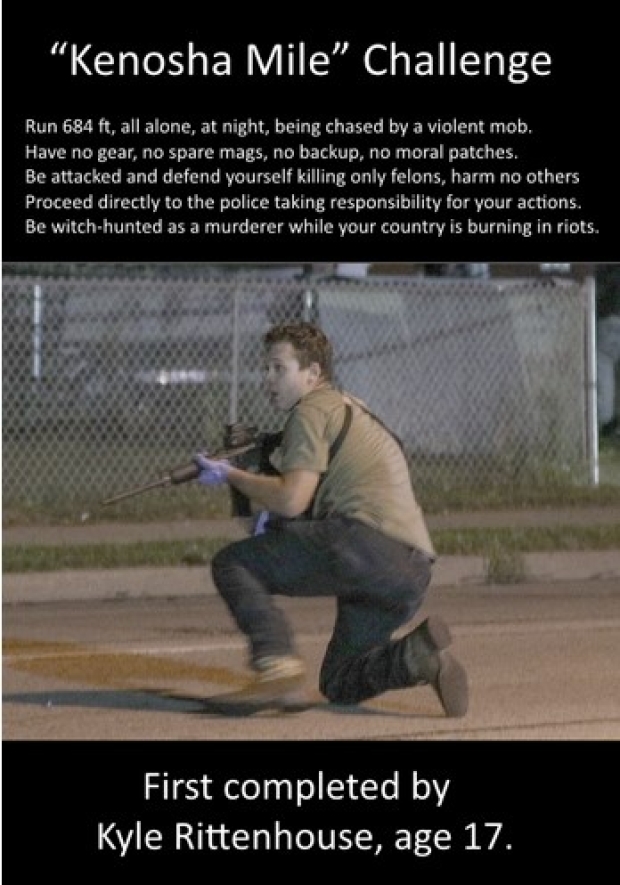 Rittenhouse now has defenders around the world; white supremacist groups in Bulgaria, Greece, Spain and New Zealand (below) have posted messages praising the killings and demanding that Rittenhouse be freed. 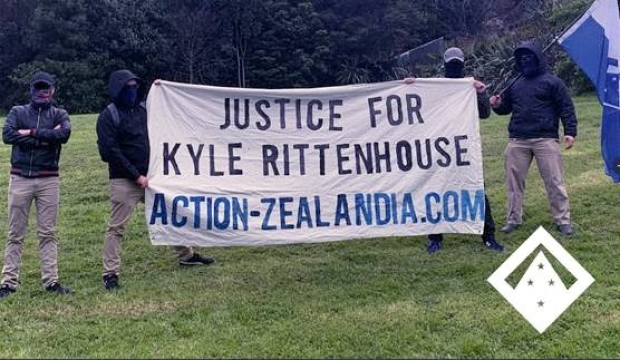 At the Extremes: The 2020 Election and American Extremism | Part 1