At the Extremes: The 2020 Election and American Extremism | Part 3

At the Extremes: The 2020 Election and American Extremism

In the weeks leading up to the 2020 presidential election, the ADL (Anti-Defamation League) Center on Extremism in conjunction with ADL’s Center for Technology and Society are releasing a series of news briefs on topics of concern regarding the role extremism plays in our current political environment.

Who/What: After President Trump announced his COVID-19 diagnosis, there was a surge of anti-Asian American and conspiracy theory content, often delving into antisemitism.

Why it Matters: the spread of xenophobic, racist or antisemitic conspiracy theories creates a dangerous political environment that could potentially result in harassment, discrimination, and even violence against targeted groups

On September 29, during the first presidential debate ahead of the 2020 U.S. election, President Donald Trump made inflammatory remarks regarding the COVID-19 virus that has killed over 210,000 Americans. “It’s China’s fault,” he said. “It should have never happened.” He also referred to COVID-19 as the “China plague.”

This was not the first time the president has cited China as responsible for the virus’s outbreak; he has been making similar comments since March. Earlier this year, as COVID-19 spread, public officials expressed anti-Chinese and anti-Asian hostility, which helped create and exacerbate a disturbing trend of harassment and violence against Asian Americans across the nation.

In the 12 hours after the president’s tweet about his and the First Lady’s COVID-19 diagnosis, the rate of discussions of conspiracy theories in the subset of Twitter conversation that ADL analyzed increased by approximately 41 percent, to .31 percent. Some of these conversations included antisemitic elements. Unlike the anti-Asian hostility ADL detected, however, the percentage of these conspiracy theories in this subset returned to a level closer to its pre-presidential-tweet level (0.25 percent) over Oct. 2 to 5.

In April, ADL reported on several  prevalent conspiracy theories related to the COVID-19 pandemic, many of which were also present within the subset of conversations we analyzed. For example, the dataset contains numerous tweets falsely advancing the allegation that the coronavirus was engineered by humans, despite the fact that researchers studying the virus’s genetic makeup agree animals first transmitted the virus to humans. The more egregious conspiracy theories claim the virus is “patented”, a bioweapon, created by the Chinese government, or some combination of the three. Another conspiracy claim that gained traction holds Bill Gates responsible for the virus or involved in its spread. 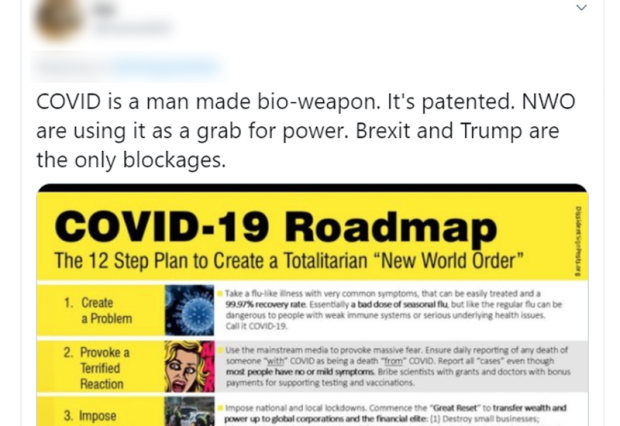 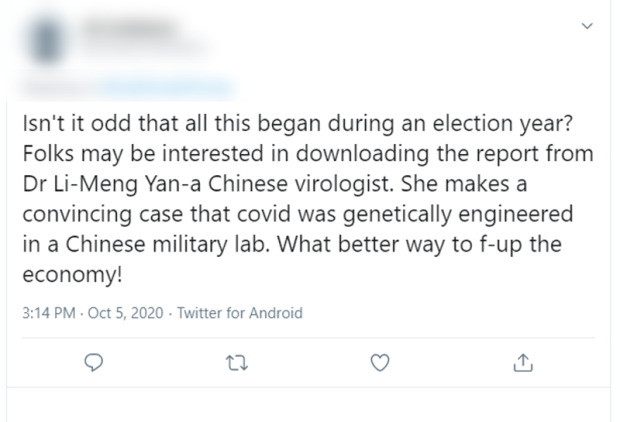 One of the most common beliefs expressed by these conspiracy theories is that a “New World Order” or “NWO”, run by secretive actors who either gave president Trump the virus or plan to assassinate him under cover of his illness, will be implemented. These discussions also mention elements of the QAnon conspiracy theories, calling on “patriqts”-- deliberately misspelled to signal fellow believers in Q -- to rescue the president. Some tweets make antisemitic claims such as President Trump is a “crypto Jew” or a Zionist agent, or that he is a pawn caught up in the machinations of Jewish interests. Others claim the president is actively fighting a Jewish plot against society. 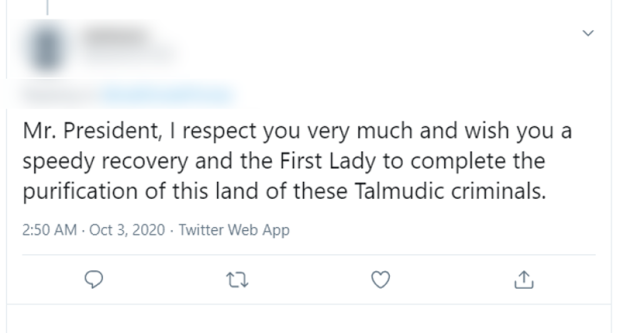 Note: This investigation relied heavily on machine learning for its data analysis. The classifier used to detect conspiracy theories was developed internally while the anti-Asian hostility classifier was developed by the authors of Vigden et al. (2020). The published version of this paper will be released later this month at the 4th Workshop on Online Abuse and Harms. Samples of the outputs of both classifiers were manually inspected by analysts at the ADL Center for Technology and Society (CTS) and Center on Extremism (COE) as well as representatives from the Congressional Asian Pacific American Caucus.

These tools, while state of the art, are imperfect and still undergoing development to further increase accuracy.  However, we believe the products and methods we used provide credible and helpful insights into how hate functions in digital social spaces. Reports such as Ziems et al. (2020), Ozalp et al. (2020) and Nguyen (2020), were generated with a similar methodology. In each case, the researchers used smaller human-annotated data sets to train a machine learning model to classify content as hateful or not. They then applied the classifier to a much larger dataset to gain insight into trends of online hate. As exemplified by these studies, this methodology is standard practice in this field.

[1] We collected slightly more than 2.7 million tweets between 4:00pm EDT on Oct. 2 (approximately 5 hours before President Trump’s announcement) to 5:00pm EDT on Oct. 5 containing either at least one of the following mentions @realdonaldtrump, @potus @flotus @senatorloeffler or at least one of the following keywords: “trump”, “melania”, “first lady”, “china virus”, “plague”, “kung flu”, or “Wuhan”.