Extremism in the Classroom 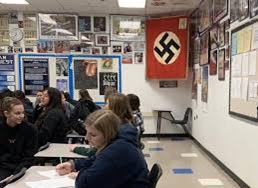 Roxanne Hartline: A large Nazi flag hung in the corner of a classroom in a high school in Bakersfield, California, in 2019

Teachers are increasingly under attack from extremist groups and government officials, who accuse them of “indoctrinating” children or express anger over coronavirus prevention policies. These sustained disinformation campaigns have led to harassment and threats against teachers, and as a result many educators are leaving teaching altogether.

While these external extremist pressures are creating significant challenges for American teachers and school boards, there is also an internal threat to students, albeit on a smaller scale: American teachers who hold white supremacist and anti-government ideologies and who may have explicit ties to extremist groups.

This is not to suggest that any significant segment of the 6.1 million teachers and professors in the U.S. are indoctrinating their students into white supremacist or anti-government ideologies on a grand scale. But given their positions of power in classrooms and influence within communities, even a relatively small number of extremist teachers poses an outsized threat to students and society more broadly.

Extremists are targeting schools and school boards nationwide, hoping to expand their reach and influence. Throughout 2021, Proud Boys members attended school board meetings across the country and joined calls to ban certain books from school libraries. In May 2021, Aryan Nations distributed racist and antisemitic fliers in an Arizona neighborhood which was selected, according to the chapter’s leader, David Miner, due to debates over Critical Race Theory in the local elementary school. The following month the Ku Klux Klan distributed leaflets with racist, antisemitic and homophobic language directed at various school board members in a neighborhood in Virginia. These groups are using opposition to mainstream curriculum and school policies as a weapon in their larger fight against demographic and social changes.

It’s impossible to know the total number of teachers who hold extremist beliefs, but the overall number is likely small, especially when compared to the vast number of people working in schools. However, given teachers’ positions of influence, even a small number of extremist teachers can cause outsized harm and presents a serious problem. To estimate the prevalence of extremist teachers in schools we examined posts on the white supremacist forum, Stormfront.

Stormfront is the oldest and longest running white supremacist website, created in 1995 by former Ku Klux Klan leader, Don Black. According to the Southern Poverty Law Center, in 2015 Stormfront was visited more than twice as frequently as the NAACP website.

The forum currently has just under 370,000 registered users, not including the many visitors who browse without creating an account. The number of active users is considerably smaller but still significant. Stormfront’s analytics estimate there are approximately 450 active users online at any given time, and just under 7,000 guests visited the forum in the last 24-hours as of May 6, 2022.

ADL researchers reviewed posts on Stormfront to identify users who claimed to be teachers, using an intelligence database’s archive which included posts made in 2001 through the present day. Posts were searched for the phrases “I am a teacher,” “I teach” and “my students.” We manually reviewed the posts to confirm the user was identifying themselves as a teacher and to remove duplicate users. During this stage, users who called themselves teachers but actually described themselves teaching self-defense, firearms courses or pick-up artist techniques were removed. This resulted in 165 users who self-identified as teachers. Of those 165 users, 28 claimed to teach at colleges and universities, 13 at high schools and six in elementary schools. The 165 number is almost certainly low, given that it does not include those who do not actively post or those who do not reveal personal information.

The conversations these teachers are having on Stormfront highlight the dangerous influence they can have in the classroom. They appear to be acutely aware of the power they have in shaping the minds of the next generation. One user wrote, “I do my best to shape and mold young minds that have not already fallen to the lies of zog [Zionist Occupied Government], and the communist left that has such a stronghold on academia.” In a post made in 2019, another user expresses that his position is good because it allows them to “impart knowledge to younger people,” but also notes this is “treacherous for my job security.”

Extremist teachers’ impact is amplified because of their positions of authority and influence. Young people are especially vulnerable to radical ideas and movements. During adolescence, young people are still searching for their identity and developing their worldview. Additionally, due to cognitive changes, they are drawn to thrill-seeking behaviors, crave a sense of belonging and are highly susceptible to peer pressure. Extremists capitalize on these vulnerabilities.

In a 2018 Stormfront thread where users introduce themselves to one another, one user who claimed to be a college professor described their experience with diversity and inclusion training requirements at universities as their primary motivation to join Stormfront. The user explained, “I have now begun to educate my students about the entire indoctrination that is plaguing our education system from grade school through college. I committed to being an undercover advocate in this cesspool to quietly get our message out.” He then ends his post with a quote from Adolf Hitler, “Er allein, der die Jugend besitzt, gewinnt die Zukunft” which translates to “he alone who owns the youth gains the future.”

Extremists can use their position to radicalize the students who trust them. Brant Williams, a former teacher who now runs a white supremacist educational platform, joined another white supremacist, Don Jackson who used to be an art and ESL teacher, for an interview that has over 1,000 views on YouTube. Williams (whose identity as a former Arizona public school teacher was first exposed by an ADL researcher) explained how teachers can take advantage of their relationship with students. He described how when he disagreed with material in the textbook, he would shut the classroom door and tell his students, “Hey kids, actually this is a lie” before telling them what he believed to be the truth. He emphasized “when you develop trust with your students, they’ll believe everything you say.”

On a Stormfront thread in the “Education and Homeschooling” room, one user wrote “Would any WN [white nationalist] teachers recommend teaching as a career? I’m really gravitating towards it, as I see it as the one place that we can influence the next generation to what is right.” Several teachers responded to describe their experiences.  One user explained that while teaching they “never openly discussed white advocacy, though it was certainly implied in certain subtexts and discussions... I took chances because I felt responsibility for my students.”

This threat of radicalization is also evident in the case of Dayanna Volitich, a former Florida public school teacher who ran the white nationalist podcast, Unapologetic, under an alias, while she was actively teaching middle school students. In 2018 she bragged, on the podcast, about radicalizing her students. She reportedly told her students that the Ku Klux Klan was a “good thing” and on her podcast explained, “that age when they first become teenagers is very critical. They’ve been indoctrinated for 12 years before coming to me. Some of them, I believe, were red-pilled as 13-year-olds. And I think that was kind of a cool thing to watch. I was watching them just open their eyes and seeing what is happening in this country.”

Educating students on the Holocaust presents extremist teachers with a heightened opportunity to share their corrosive, hateful views. Studying the Holocaust is a powerful opportunity for students to understand the consequences of racism and recognize their role as responsible citizens in a democracy. However, many white supremacists believe the Holocaust was either a hoax or an explicitly positive event.

In a 2018 post, one Stormfront user (self-identified as a teacher) described how they avoided mentioning the Holocaust when teaching about World War II and instead tried to “focus 90% of the study on the economic policies which Hitler implemented that staved off economic collapse, the progressive social policies he implemented to help families and young people, and have all my students study the reasons behind his popularity.”

The user adds: “When one of my students waited around after class and said to me in a hushed tone, 'Wow, so Hitler actually did a lot of great things, didn't he?', I couldn't help but smile. Take that, zog.”

In another post, a user who claimed to teach Biology at a university in New Hampshire wrote, “I believe as a professional Educator it is my duty to teach my students the truth not what is ‘politically correct’ Although I have lost one job already for asking my students to have an open mind and reconsider some of the so called facts of WWII and the holocaust.”

This can have a tremendous impact on students. In 2014, an assignment in the Rialto Unified School District in California required students to read sources that denied the existence of the Holocaust and write an essay about whether they believed the event actually took place. The assignment referred to these sources as “credible” and in their assignments at least 50 eighth graders questioned or outright denied the Holocaust. In one paper a student wrote, “I believe the event was fake, according to source 2 the event was exhaggerated [sic]… I felt that was strong enogh [sic] evidence to persuade me the event was a hoax.” In response to this paper, the unidentified teacher wrote, “You did well using the evidence to support your claim” and scored the paper 23 out of 30 points. Administrators defended the assignment as an opportunity for students to learn critical thinking and refused to release the names of the staff responsible.

Another subject that teachers have discussed inappropriately with their students are election conspiracies and the events of January 6th. At least nine educators have been criminally charged for involvement in the attack on the Capitol. Additionally, at least seven other teachers participated in the events that day but avoided criminal charges along with several school board members.

U.S. District Judge Trevor N. McFadden considered Robert Morss, who as of January 6, 2021, was a Pennsylvania substitute teacher and army veteran, one of the most extreme individuals among the 30 related cases he reviewed. Morss arrived at the Capitol dressed in his military uniform, armed with scissors and what appeared to be a knife. During the siege he allegedly assaulted police officers, removed barricades and directed his fellow rioters to grab police officers’ shields and use them against the officers. After he was arrested, police found his plans to establish a militia and six firearms in his home.