White supremacists have been enthusiastic supporters of Donald Trump since he announced his candidacy for president in June 2015 with bigoted remarks about Mexican immigrants. Subsequent remarks from Trump about banning Muslim immigration to the U.S served to solidify that support. White supremacists believe that Trump is voicing their own xenophobic and bigoted views toward immigrants and non-whites. 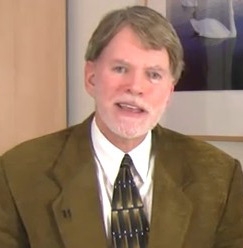 David Duke, a racist and anti-Semite and the most notorious bigot in America, urged his supporters to back Trump. On his radio show in February, Duke said that “voting against Trump is really treason to your heritage.” Duke even told his listeners to volunteer for Trump during the election. He added that he hoped that Trump “does everything we hope he will do.”

One of Trump’s biggest supporters is neo-Nazi Andrew Anglin who runs the Daily Stormer website. The site is filled with virulently racist and anti-Semitic articles. In July 2015, Anglin wrote an arti­cle that praised Trump for his com­ments on Mex­i­cans. Anglin asserted, “The Trump Train has left the sta­tion and is run­ning non-stop to total vic­tory over the bar­bar­ian hordes of Mex­ico. Because there is one issue which mat­ters beyond all other issues and that is the inva­sion of White coun­tries by non-whites.”Anglin adds that “the amount of good” that Trump has done “is immeasurable.” Anglin now refers to Trump as “our glorious leader,” and extols Trump at every turn.

White supremacist William Johnson, head of the American Freedom Party does more than talk about supporting Trump. He has actually created the American National Super PAC, which has paid for a series of robocalls supporting Trump for president. The calls have gone out number of states, including Iowa and New Hampshire. New robocalls are scheduled for Vermont and Minnesota which tell voters not to “vote for a Cuban.” The calls go on to say that the “white race is dying out in America and Europe because we are afraid to be called ‘racist.’” Johnson has long courted the more hardcore members of the white supremacist movement, including racist skinheads.

Jared Taylor, a white supremacist who runs the American Renaissance website is another enthusiastic supporter of Trump. The American Renaissance site features articles that purport to demonstrate the intellectual and cultural superiority of whites. Taylor has written a number of articles endorsing Trump. His voice also appeared on the American National Super PAC robocalls in Iowa, where he told voters that “we don’t need Muslims. We need smart, well-educated white people who will assimilate to our culture.”

Richard Spencer, a white supremacist who runs a tiny think tank called the National Policy Institute has posted videos and articles endorsing Trump for president. Spencer is a symbolic of the new white supremacy whereby young racists would rather don suits and ties than a Klan robe to promote white nationalism. In an interview, Spencer said that Trump “seems to genuinely care about the historic American nation that is white people.”

Kevin MacDonald, a notorious anti-Semite and retired professor, has also backed Trump. He has lauded Trump’s comments about banning Muslim immigration and says that electing Trump “may be the last chance for Whites to elect a president who represents their interests.” MacDonald actually tried to raise money for his anti-Semitic publication, The Occidental Quarterly, by touting Trump’s candidacy. He wrote, “Donald Trump’s candidacy is a game changer and has a very real possibility of success. In this new climate, millions of White people are realizing that it’s entirely legitimate to oppose immigration and multiculturalism. It’s okay to oppose the idea that every last human has the moral right to immigrate to a Western country, or that all peoples and cultures are equally acceptable as immigrants.”

Matthew Heimbach, a racist and anti-Semite who co-founded the Traditionalist Youth Network, a white supremacist group, has expressed support for Trump. He wrote, “The march to victory will not be won by Donald Trump in 2016, but this could be the stepping stone we need to then radicalize millions of White working and middle class families to the call to truly begin a struggle for Faith, family and folk. For this reason alone I will campaign for Donald Trump because as the saying goes ‘The enemy of my enemy is my friend’ and that is doubly true if that person is viewed as an enemy by the International Jew.”

It has also been reported that the Knights Party, a Klan group in Arkansas, uses Trump and his views as a talking point when questioning potential recruits. In an article in Politico, Rachel Pendergraft, a spokesperson for the group, said that Trump, “has offered KKK members a prime opportunity to feel out potential recruits on their racial attitudes.”

Lee Rogers, who runs the neo-Nazi website Infostormer, refers to Trump as “our leader.” Like Andrew Anglin, Rogers posts viciously racist and anti-Semitic articles on his site and exalts Trump.

James Edwards, a white supremacist who runs the Political Cesspool website and radio show, wrote a blog about attending a Trump rally in Memphis on  February 28 as a representative of the press.  Edwards declared that he is voting for Trump and encouraged his own supporters to do the same. Edwards added, “With Trump, America has a chance to regain her identity.”

As a 501(c)3 non-profit orga­ni­za­tion, the Anti-Defamation League does not sup­port or oppose can­di­dates for polit­i­cal office.