Extremists and Contentious Language at School Board Meetings: What You Can Do 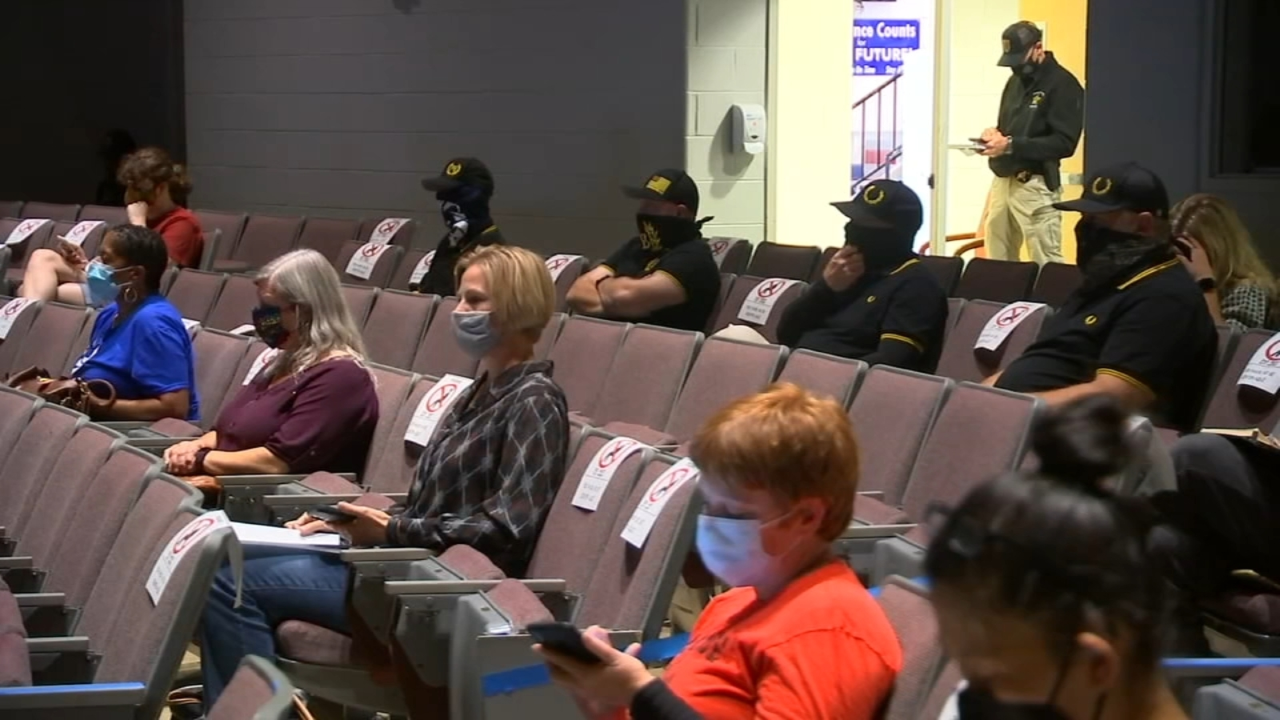 Proud Boys at a school board meeting, November 2021.

What is Critical Race Theory and Why Is it in the News So Much?

School board meetings are often venues for contentious discourse. While common topics of controversy vary over time depending on national and local issues, we saw a significant increase this past year in extremists’ leveraging these meetings to express their beliefs around COVID-19 mandates and state laws banning “Critical Race Theory (CRT)” and “divisive concepts.”

As schools find themselves in the crosshairs of implementing critical public health measures and fraught debates around CRT, there has been a documented increase in threats, harassment, and doxing targeting school board members around the country. Doxing, which is publicly posting a person’s name and contact information without their permission so that they may be contacted and, in some cases, harassed by those who now have access to this information, is especially pernicious because it can be difficult to identify or sanction those responsible. Some school board members have even been targeted with white supremacist propaganda because of their leadership role. In addition to the impact on those in attendance, hateful rhetoric used at school board meetings can negatively impact staff, students’ and community members’ sense of safety and inclusion.

School board members are increasingly forced to contend with deteriorating discourse, the presence of extremists, and in some cases direct threats. Some extremist entities have also seized on these heightened tensions around COVID-19 mandates and anti-CRT laws as fertile ground for recruitment efforts.

What examples have we seen of this type of targeting?

Why might an extremist group be interested in making their voices heard at a school board meeting or at a protest outside of a school? Traditionally, these spaces have not been significant targets of extremist activity. However, after the Insurrection on January 6, 2021, some extremist groups have re-strategized to maximize their presence and impact. Schools’ policies and curricula have provided convenient opportunities for them to increase their presence and fight for anti-mask mandates and anti-CRT positions.

To illustrate the scope of this issue, the following examples highlight some of the most egregious instances of extremists targeting school board meetings in the past year:

What might indicate an extremist presence at a school or school board meeting?

ADL defines extremism as “a concept used to describe religious, social or political belief systems that exist substantially outside of belief systems more broadly accepted in society (i.e., “mainstream” beliefs). Extreme ideologies often seek radical changes in government, religion or society. Extremism can also be used to refer to the radical wings of broader movements, such as the anti-abortion movement or the environmental movement...”

ADL identifies a range of extremist groups and movements that vary in ideological underpinning, each of which has unique characteristics and identifying factors. To determine if a member of an extremist group is present at a school board meeting, it is helpful to examine flyers and social media posts from extremist groups posted prior to attendance, as they are likely the best way to indicate in advance that there might be an extremist presence. Footage or photos that include clear extremist symbols or affiliation or self-admission of attendance can help determine whether members of an extremist group were present.

Some other indicators of extremist presence can include the “uniforms” or clothing specific to extremist groups, signs or flags indicating group affiliation, tattoos or other symbols that might indicate support or familiarity with a certain extremist group, and self-admission of group membership to reporters afterwards on a group’s social media page. However, not all extremist groups are easily identifiable by “uniforms” or colors that they typically wear, and we have seen evidence of extremists wearing plain clothes in order to blend in at school board meetings. ADL’s Center on Extremism’s Hate Symbols Database is a comprehensive list that can help determine if an extremist sign or symbol was present.

What about extreme rhetoric from a non-extremist individual?

What is the outlook for this continued behavior?

Unfortunately, extremist groups have found success by using school board meetings to gain publicity and potentially new recruits to their cause. It is unlikely that we will see this strategy go away if these debates continue, and we could see other types of groups start using this tactic on other issues. Extremists and others have been emboldened by the mainstreaming of divisive and inflammatory rhetoric around these issues and have sometimes been compelled to show up themselves to make their opinions heard. Identifying and reporting extremist activity at school board meetings is important, but it is also essential to have practical tools for ensuring safety and improving discourse at school board meetings, while adhering to the right to freedom of speech.

The free expression of ideas and viewpoints is vital for any community to learn, thrive and grow. During school board meetings, it is an important and constitutionally protected right that members of that school’s community be able to voice their opinions and perspectives. At the same time, this free expression can and has resulted in bias-based behavior and expressions at school board meetings. There are still things that school boards can do to help promote a safe environment and convey messages of inclusivity to the community. Consider the following suggestions that school boards and their members can take to counter biased speech, no matter the source or ideology of the speech.

Because public schools are public institutions, First Amendment free speech principles apply to open school board meetings. Since questions regarding what speech may be restricted—and in what way—may arise at school board meetings, we recommend that you consult with your legal counsel or your school board’s by-laws for guidance on how to respond to specific situations. This document is not intended to provide legal advice. These suggestions do not include information on security, law enforcement involvement, codes of conduct or any other issues that potentially raise issues of free speech or public safety.

Before the Meeting: Inform and Prepare

Preparation for school board meetings will help the meeting run more smoothly and aid in preventing confrontational, harassing, or violent behavior. Here are some suggestions for how to prepare for these meetings:

During the Meeting: Address and Respond

As much as you may prepare in advance, school board meetings can quickly escalate into bias-based expressions, behaviors or incidents. In addition to the Chair/facilitator, others should be mindful of what’s happening both inside and outside the meeting. Here are some suggestions:

After the Meeting: Communicate, Heal and Educate

When biased language, a bias incident or extremist group presence/activity occurs at a school board meeting, there could be residual and long-term impacts on a school community. It is important that the school community has the opportunity to communicate, heal and learn from the experience after a challenging school board meeting or similar event. Here are some important steps to take: