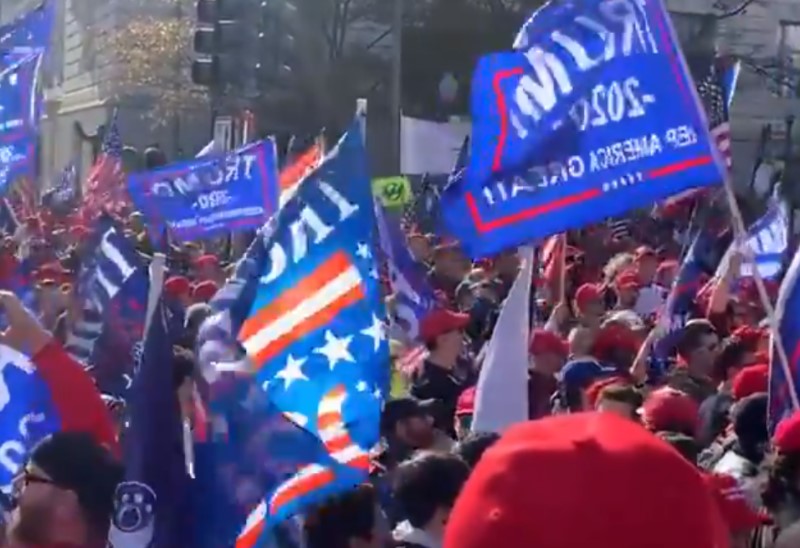 At the Extremes: The 2020 Election and American Extremism, Part 7

Thousands gathered in Washington, D.C. on Saturday, November 14, 2020 for the so-called Million MAGA March. Attendees and speakers, including a number of extremists, expressed support for President Trump, who continue to insist, without evidence, that he won re-election nearly two weeks ago.

The rally was loosely organized, and speeches, some of which were impromptu, took place in both Freedom Plaza as well as in front of the Supreme Court. While the main rally was mostly peaceful, at least 20 people were arrested on various charges throughout the evening following the event. Most of the conflict occurred between Trump supporters and counter-protesters, with some fistfights, leaving some bloodied. At least one stabbing was reported. Some Trump supporters appeared to be harassed by counter-demonstrators, targeted with bottled liquid and, in one case, fireworks. After altercations between Proud Boys and counter-protesters, Proud Boys reportedly chanted 'Break out Kyle!' in reference to Kyle Rittenhouse.

There was a notable extremist presence at the D.C. protest. Dozens of Proud Boys were on the ground, led by Enrique Tarrio. Later, the group held an evening “initiation” ritual at the Washington Monument.

White supremacist Nick Fuentes, accompanied by members of his so-called Groyper Army also took part, waving their group’s flag alongside Trump 2020 flags. Fuentes, speaking to a group of groypers, railed against Republican legislators and Fox News, adding. “…we are not going to live as captives. This is our Republican party. This is our country. USA!” 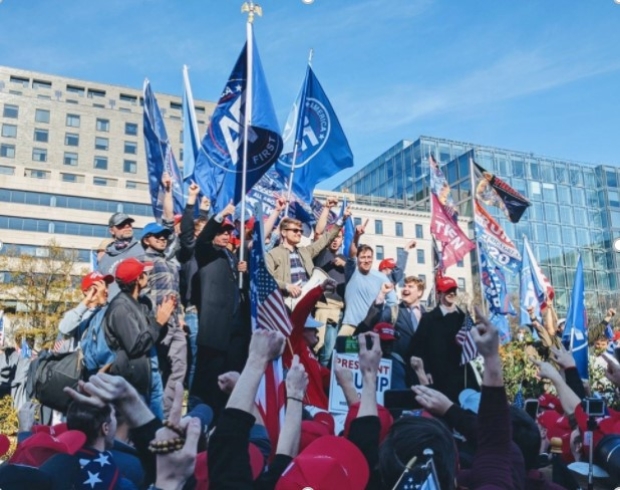 InfoWars’ Alex Jones and Owen Shroyer, who have been promoting their cross-country “Stop the Steal” tour, both gave speeches. 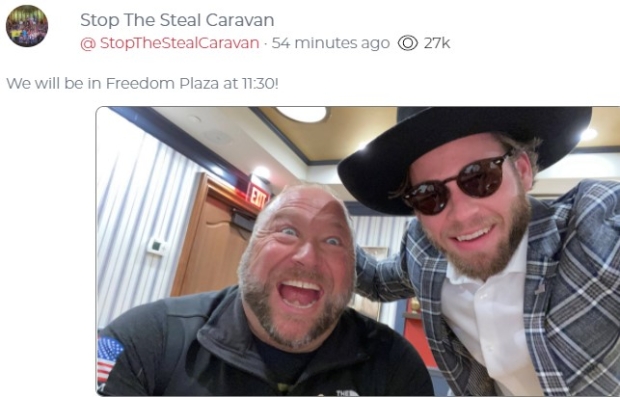 Jones gave perhaps the most inflammatory speech of the day, echoing the conspiracy theories that have long defined his tenure as a public figure. He framed the march as the second July 4, 1776, to be celebrated “for hundreds of years as the Second American Revolution.” He spoke about the “Death to the New World Order, death to tyranny, and life to America and our unborn children. The pedophile globalists and their attempted election steal and the Clinton blackmail rings have only summoned the sleeping giant that is America.” He also said, “The Satanist pedophiles the Democrats represent knew the world awakening was here. And so you’re seeing, right now, their desperate operation against humanity. And make no mistake, they control the corporations, they control Hollywood, they control the blue cities and blue states and other governments.”

Greene spoke about need to win the two U.S. Senate seats in Georgia in order to “save America and stop socialism.” Gorka told the crowd, “We don't want violence, but we will never let them steal our republic.” Gohmert, meanwhile, characterized the protests against the “stolen election” as “a fight to save this little experiment self-government from the establishment, from the globalists…Don’t give up the fight!”

President Trump drove by the event as it began, on his way to play golf, waving from his vehicle along the march route. Later, he tweeted an image of the crowd and repeated his baseless claims of a “stolen” election. Vice President Pence also voiced his support, tweeting, "Thank You All! What a great #MarchforTrump! MAGA!”

There was minimal extremist presence, meanwhile, at simultaneous “Stop the Steal” rallies in Arizona, Tennessee, Oregon, Michigan, and Georgia, where QAnon supporters were visible, along with close to a dozen people wearing militia-inspired gear.