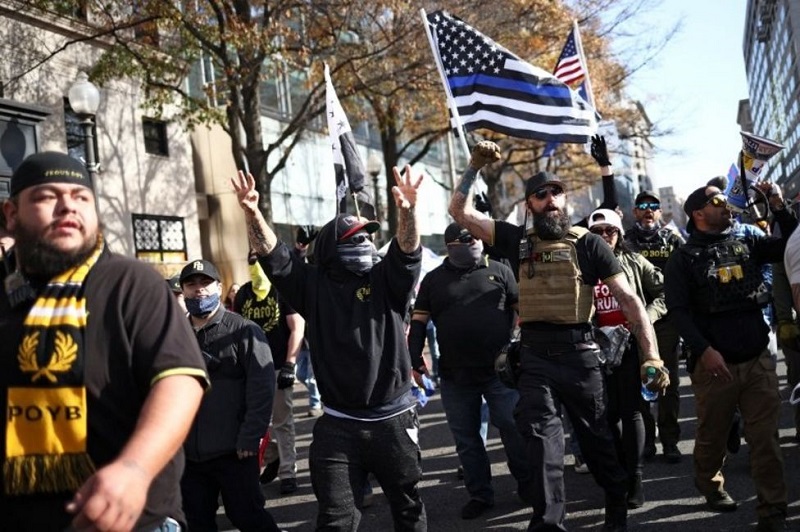 Several pro-Trump protests are being organized on Wednesday, January 6, 2021, in Washington, D.C. to express rejection of the November 2020 election results and to pressure Congress to not certify President-Elect Joe Biden’s electoral victory. These events—which are being timed to coincide with a joint session of Congress where Electoral College votes will be formally counted—have been encouraged by President Trump in multiple inflammatory tweets urging his supporters to show up in D.C.

Proud Boys leader Enrique Tarrio was arrested on Monday, January 4, 2021 "on suspicion of burning a Black Lives Matter banner torn from a historic Black church in Washington," according to the New York Times. Tarrio, who was taken into custody shortly after arriving at Washington National airport, announced in late December that he planned to attend January's pro-Trump rallies in Washington. He is expected to be charged with a misdemeanor destruction of property charge for his alleged role in the December 12, 2020 arson, per news reports, and may be released as soon as Monday evening. Tarrio was also charged with two accounts of possession of high-capacity firearm magazines, which were allegedly discovered during the arrest, according to police and the Washington Post. 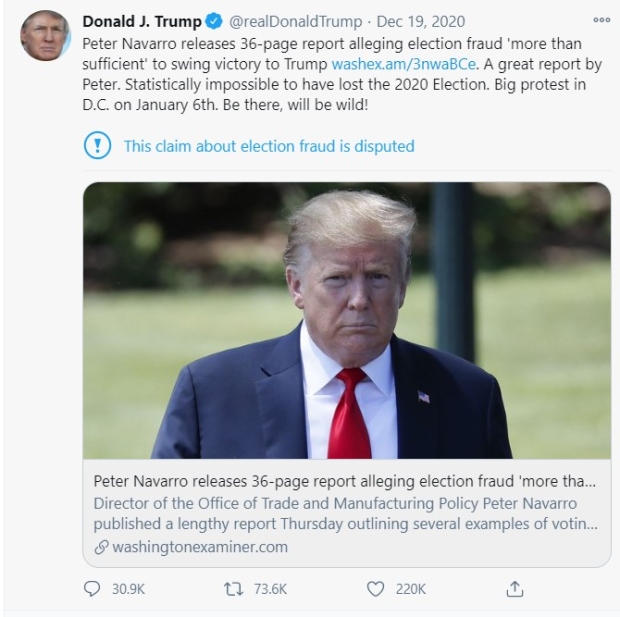 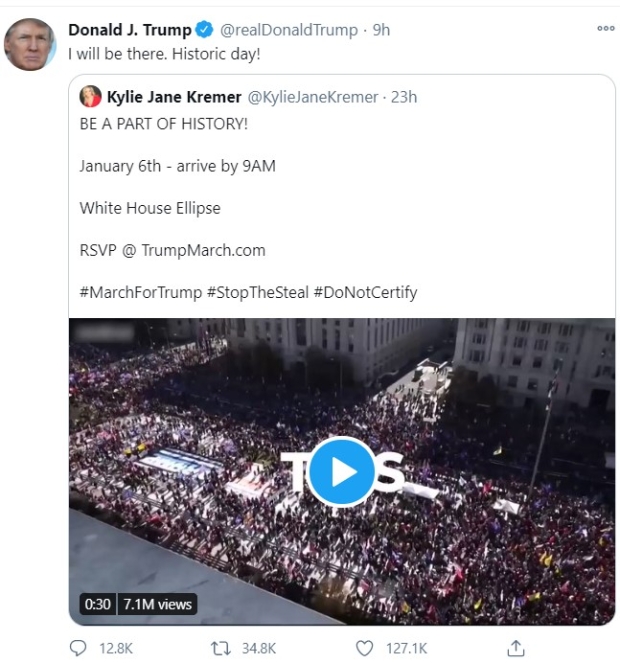 This collection of protests on January 6 will be the latest major pro-Trump events in D.C. since the election on November 3. Some of the previous protests, including at the November 14 “Million MAGA March” in DC and at rallies on December 12, featured extremists in attendance and violence. Those included incidents in which black churches were vandalized, individuals were assaulted and a degree of chaos ensued.

Various organizers have filed for at least four permits related to the January 6 rallies. These include a Capitol lawn “Stop the Steal/Wild Protest” organized by right-wing provocateur Ali Alexander, a “Trump March” at Freedom Plaza organized by Women for America First, a march led by James Epley of South Carolina from the Mall to the Capitol lawn and a “MAGA Wild” rally organized by the Eighty Percent Coalition, a reference to a November Gallup poll that found that more than 80% of Republicans do not trust the election results. A fifth event, “Operation Occupy the Capitol” is being promoted on social media, but it is not clear who is promoting the event.

Online chatter among potential attendees has increased in the days leading up to the rally. On “TheDonald.Win" forum, which replaced the banned subreddit “The Donald," users are sharing messages filled with violent rhetoric directed at a wide range of perceived enemies. In response to a user who wondered what happens if Congress ignores "evidence" that President Trump won the election, a user wrote, “Storm the capitol” and another added, “My truck is lifted and I have a plow on it right now. What do you need Mr. President?” In a separate thread about Congress, someone wrote, “Please, I dare them to defy the constitution while millions of patriots are anxiously waiting to hang them and gun them down in the streets like the tyrants they are.” Posters also expressed hostility towards law enforcement officers for their role in enforcing gun restrictions. Said one user in a thread about the restrictions, “Travel in packs and do not let them disarm someone without stacking bodies.”

Meanwhile, conspiracies about "antifa" activity at the D.C. rally are spreading on social media. These include accusations that antifa plans to infiltrate the ranks of the attendees, as well as allegations that antifa is preparing to intercept “Patriot” convoys heading to D.C. and plan to attack attendees at Metro stations. Photos of construction materials are also being shared, accompanied by the theory that antifa has planted them to use against rally attendees. The rising anti-police sentiment on the far right is also evident in the form of conspiracies alleging that police are "escorting" antifa into D.C.

A range of extremist individuals and groups have promoted the events, and some have announced that they will attend, including agitators such as white supremacist and Groyper Army leader Nicholas Fuentes and conspiracy theorist Alex Jones, who announced on January 2 that he will attend the "Rally to Save America" at noon on Tuesday, January 5, in Washington, D.C.'s Freedom Plaza. The event will also feature longtime Trump ally Roger Stone. 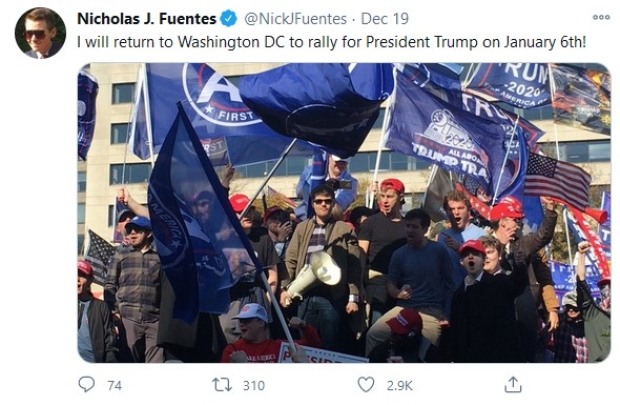 On January 4, Fuentes posted a video on DLive tacitly urging followers to kill state legislators, before reversing himself. ""What can you and I do to state legislators?" he asked. "Besides kill them. Although, I'm not advising that, but I mean, what else are you going to do?"

Clashes between attendees and counter-protesters are possible, especially because the Proud Boys may attend the rallies.

Many extremist and mainstream Trump supporters are framing the rallies as a last stand to prevent Biden from being sworn in as the next President, and some chatter indicates that there is a desire to engage in radical and sometimes violent tactics to ensure that the election is not stolen from President Trump. For instance, “Stop the Steal/Wild Protest” organizer Ali Alexander warned in video posted on Twitter on December 27, 2020 that if President Trump tells people not to leave D.C. then he will not leave and he will have truckers sit on the bridges so that no one else can get out. 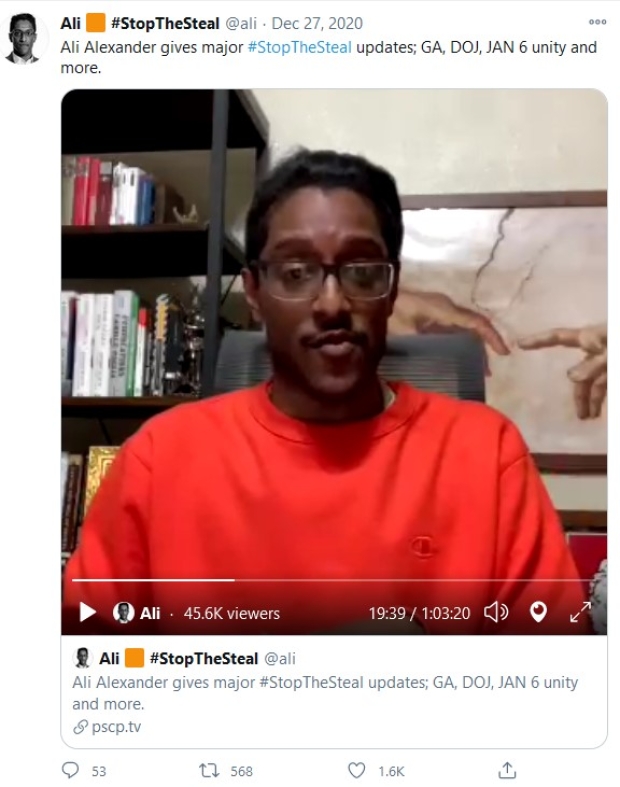 Oath Keepers announced on January 4 that they will have multiple volunteer "security" teams in Washington D.C. on January 5 and 6, 2021. The organization says their members, who may be "undercover" and not identifiable as Oath Keepers, will provide security for speakers, event attendees and Trump supporters as they walk across the city.

Elsewhere in chats frequented by militia members, several militia members insinuated that if nothing is done to prevent Biden’s election certification then violence might become necessary. As one user wrote, “The 6th is the line for me. It will change or it will begin.” Added another, “I am waiting until the 06 Jan date, then if Trump does nothing…I have a few LEO [law enforcement officer] friends who are going to do some major action and I am joining them.”

Protesters who can't travel to Washington have been encouraged to gather at smaller, pro-Trump rallies scheduled for January 5 and 6 in state capitals across the country. A few of the capitals mentioned: Indianapolis, Indiana, Sacramento, California, Lansing, Michigan and Coeur d'Alene, Idaho, where former U.S. Rep Matt Shea is scheduled to speak on January 5.

At this time, ADL is not aware of any credible threats of acts of violence that are slated to occur at the January 6 protests. However, if the past is any indication, the combination of an extremist presence at the rallies and the heated nature of the rhetoric suggests that violence is a possibility.

Below are examples of extremists and conspiracy theorists who are promoting the event: