Extremists are Using a Range of Techniques to Exploit TikTok

Extremists are constantly adapting and finding creative ways to reach new audiences – and new ways to evade content moderators. Their latest efforts are evident on TikTok, the Chinese social media app that allows users to create and share short videos.  In less than four years, TikTok has racked up more than 800 million users, and its popularity is fast approaching that of social media giants like Facebook, WhatsApp and Instagram Each TikTok video has the potential to reach hundreds of millions of users, many of whom are children.

Despite TikTok’s efforts to moderate and/or remove extremist content via community guidelines that cover a wide range of problematic content, from hate speech to discussions of self-harm, a cursory review of the platform by ADL’s Center on Extremism found that white supremacists and antisemites are using a range of methods on the platform to recruit new adherents and share hateful content. The following is an overview of some of the techniques extremists use to evade detection and amplify their hateful messages. It does not reflect an audit of all TikTok content.

ADL has alerted TikTok to the range of examples of hate speech on their platform, including the examples that follow, and in recent weeks ADL’s Center on Technology and Society and Center on Extremism have been working closely with TikTok’s Trust and Safety team to help them identify and address the hate on their platform. TikTok has committed to working closely with ADL to address these issues going forward.

Extremists use a range of methods to embed their content into TikTok videos. This includes adding screen captions, directing viewers to external content or holding up signs or books during videos to represent their views. Because TikTok users can find content via hashtag searches, extremists also use hashtags to broaden their audience and reach -- using hashtags that are designed to both provoke dissidents and draw support. For example, a user whose ultimate message is “Black Lives Don’t Matter” might use #blacklivesmatter, #alllivesmatter, and #whitelivesmatter.

Extremists also dub over original video content and add their own. One TikToker took a video of Swedish YouTuber PewDiePie and added a voiceover to make him appear to say, “Hey guys PewDiePie here. Death to all Jews. I want you to say after me, death to all Jews. And you know, Hitler was right. I’ve really opened my eyes to white power and I think it’s time we did something about it.” Another user created a voiceover for a clip from the animated movie The Incredibles, which portrayed Mr. Incredible as a “Goyim” (a disparaging Yiddish and Hebrew word for non-Jews) and his supervisor as a hateful and manipulative Jew bent on enacting globalist policies. Yet another video creates an antisemitic skit using a video clip from Regular Show, an animated sitcom. In the TikTok skit the character Mitch “Muscle Man” Sorenstein gives his girlfriend, Starla, a rose. She responds by saying, “A Jew would never do this for me.” Mitch responds, “Actually, Starla I have a confession to make, I’m Orthodox.” Starla laughs maniacally and says, “You’ve been kicked out of 109 different countries!”

White supremacists are also using TikTok to recruit and lead viewers to extreme content by sharing external links via their profile bios. Numerous TikTok profiles share links to websites and social media profiles for groups such as Patriot Front and the America First “Groyper Army.” Other TikTokers share links to platforms featuring white supremacist or antisemitic content, such as Telegram, Discord or Twitter.

TikTokers also use explicit and well-known white supremacist symbols in their profile images. This includes neo-Nazi symbols such as swastikas, SS bolts, sonnenrads, totenkopfs, and Klan symbols like the hooded Klansmen and the blood drop cross.

Other TikTokers attempt to avoid detection and circumvent the site’s community guidelines by using spoonerisms, which are intentional typographical errors in profile names and handles. The strategy includes misspellings, transposition of the first letters of two words and the use of numbers in place of letters such as 4 for the letter “A,” 3 for the letter “E,” and 1 for the letters “I” and “L.” Some examples of the tactics include ntupidsigger, kuuklixklan, 4d0lfH1t13r, N4z1 and negr0ki11er. One individual on the platform uses Morse code in their bio to say, “kill the gays.” 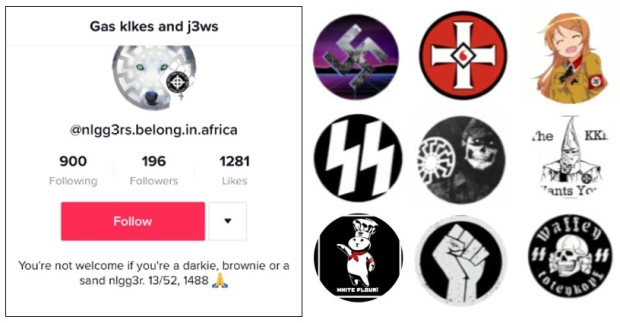 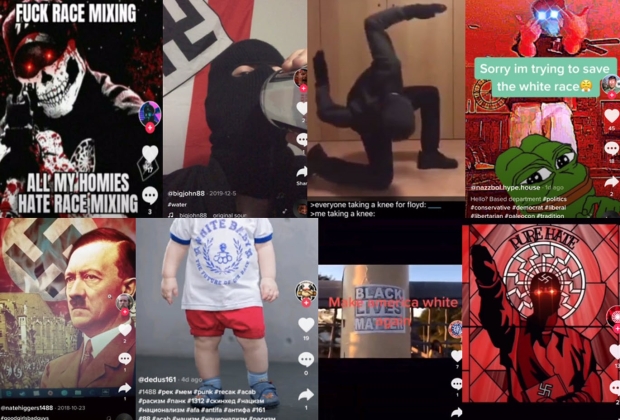 ADL’s research showed that TikTok has made efforts to ban individuals who violate the platform’s community guidelines. However, many banned users simply create new accounts and find different ways to express their hate. 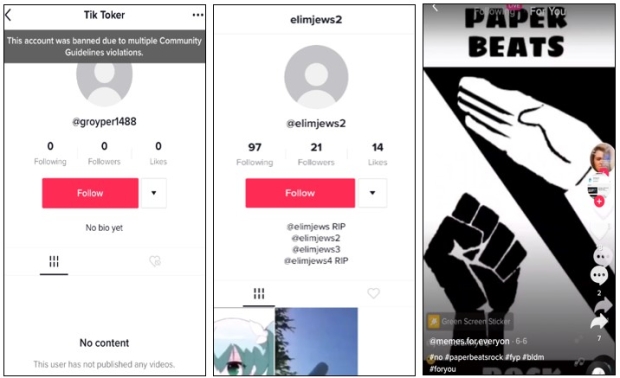 Over the course of several days in late July 2020, dozens and dozens of profiles popped up showing a “paper beats rock” graphic that features a white hand giving a Hitler Salute over (“beating”) a raised black fist, a symbol widely associated with the Black Lives Matter movement.