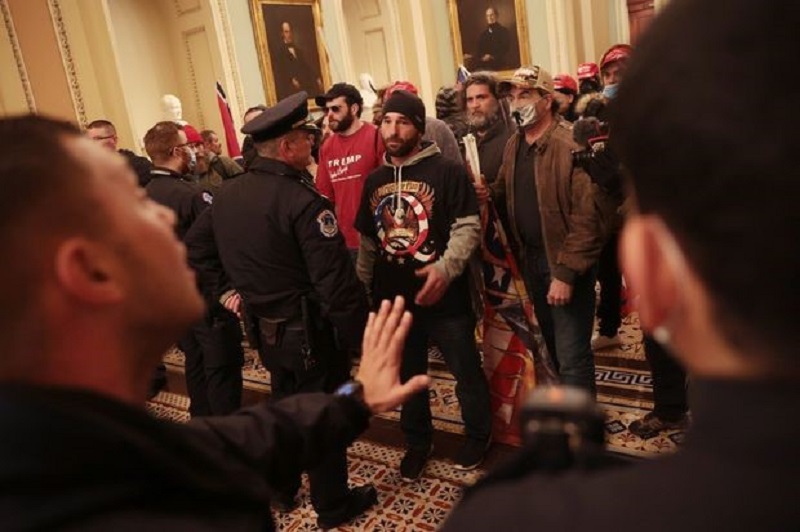 On Wednesday, January 6, 2021, pro-Trump extremists, including a broad coalition of right-wing extremists, descended on Washington, D.C. and a number of state capitals. Ostensibly gathered to hear President Trump and his family speak, and to dispute the result of the 2020 presidential election, which is scheduled to be certified in Congress on Wednesday, protesters stoked violence against law enforcement officers before storming the U.S. Capitol in an extraordinary display of political violence.

Wednesday afternoon, the Capitol was under siege by protesters who had taken over the building, photographing themselves in the House chamber and trapping members of Congress and staffers. The President’s tweets and those of many of his supporters incited this violence, which included the death of a pro-Trump extremist, who was shot inside the Capitol.

As the chaos unfolded, President Trump tweeted his support for the rioters: “These are the things and events that happen when a sacred landslide election victory is so unceremoniously & viciously stripped away from great patriots who have been badly & unfairly treated for so long. Go home with love & in peace. Remember this day forever!”  The tweet was later deleted by Twitter, and the president’s account was put on a temporary suspension.

Earlier in the day, Metropolitan Police discovered and successfully detonated two homemade bombs, which were placed near the buildings housing the offices of the Democratic and Republican National Committees.

The same Proud Boys Telegram channel published this comment Wednesday night: “For several hours, our collective strength had politicians in Washington in absolute terror. The treacherous pawns (cops) were also terrified. The system would have you believe that you are alone. That’s why they want to ban all ‘radicals’ from social media. They want you to feel alone. But the truth is that you are not alone. We are everywhere. Things will get difficult soon but don’t lose heart. We are growing and our unity will terrify the evil elites running this nation.”

Prior to the attack on the Capitol, Gab founder James Torba appeared to urge followers to “storm” the building, writing, "Would be a real shame if the people outside stormed the Senate."

Simultaneous pro-Trump events took place nationwide Wednesday, including “Wild Protests” or “Stop The Steal” rallies in Sacramento and Los Angeles, California, where Three Percenters were in the crowd, as well as Phoenix, Arizona, Lincoln, Nebraska, Salem, Oregon and Austin, Texas. At a “Stop the Steal” rally in Lansing, Michigan, a group erected a massive cross on the grounds of the state capitol. Brien James, of Proud Boys and American Guard, attended a rally in Indianapolis, Indiana.

Tuesday also saw considerable extremist activity in D.C., including a member of the neo-Nazi National Socialist Club (New England), as well as right-wing extremist Tim Gionet/Baked Alaska leading a series of anti-police chants, and Owen Shroyer (of Alex Jones’ Infowars) burning a Black Lives Matter Flag “in honor” of Proud Boys leader Enrique Tarrio, whom Shroyer called “a political prisoner.” Tarrio was arrested Monday on charges connected to the burning of a Black Lives Matter banner at a Black church. He has been released but is banned from D.C.