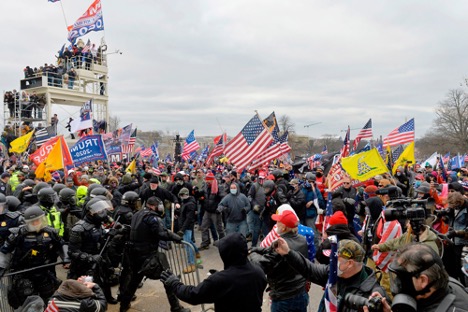 It’s been more than a month since a horde of extremists forced their way into the U.S. Capitol, protesting the outcome of a national election and intent on disrupting a time-honored democratic process. At least five people died during the violent attack, including one Capitol Police officer.

ADL’s Center on Extremism (COE) has identified 212 of the roughly 800 individuals who are believed to have breached the building on January 6. The emerging snapshot of the insurrectionists shows a range of right-wing extremists united by their fury with the perceived large-scale betrayal by “unprincipled” Republican legislators.

Of the 212 individuals identified by COE, 52 (or 25 percent) have ties to known right-wing extremist groups, including Oath Keepers (six people), Proud Boys (17), Groypers and other white supremacists (10) and the QAnon conspiracy theory (14). A number of Proud Boys members and Oath Keepers have been charged with conspiracy in connection with the January 6 insurrection. A conspiracy charge means the government believes these individuals agreed to engage in criminal activity that day.

The remaining 75 percent are considered part of the new pro-Trump extremist movement, a decentralized but enthusiastic faction made up of self-described “patriots” who continue to pledge their fidelity to the former President.

According to the current ADL data, at least 38 states and the District of Columbia are represented among the insurrectionists, demonstrating the national reach of disinformation and propaganda that fueled the January 6 attack. The country’s five most populous states (TX, CA, NY, FL and PA) accounted for 41% of the total individuals ADL has identified in the attack, with the most hailing from California and Texas.

President Biden’s inauguration gave many of these groups a new focus. Weeks later, how are they responding to the dawning reality and permanence of Donald Trump’s loss and departure? What can we expect from them in the coming months?

Proud Boys were disproportionately represented in the Capitol siege demographic, and at least three members, Nicholas Ochs, William Pepe and Dominic Pezzola, have been charged with conspiracy in connection with the insurrection. On February 11th, five additional people associated with the Proud Boys --  William Chrestman, Louis Enrique Colon, Christopher Kuehne, Felicia Konold, Cory Konold  -- were arrested on charges that they conspired with others to obstruct an official proceeding before Congress.

The group has been going through a rough patch in the weeks since January 6th. Members share other right-wing groups’ fury with the Republican party; a growing number of members appear to support a “third way” or alternative party.

In late January, Proud Boys leader Enrique Tarrio was exposed as an informant, news that elicited both stubborn support and furious rejection from fellow Proud Boys. Chapters in Oklahoma, Alabama, Nevada and Indiana have broken from the main group, citing Tarrio’s reported betrayal.

Tarrio denies these allegations on his Telegram channel, claiming the reporting is just a media “clickbait” tactic to distract from the "real" issues of fake news, BLM, and antifa.

The anger and confusion around the Tarrio revelations has prompted some to call for change in leadership, and some Proud Boys are now fighting over control of the group’s trademarked name.

“Whites MUST have their own declared ethnostates,”announced a February 9, 2021, post on the racist, antisemitic “Proud Goys” Telegram channel linked to Kyle "Based Stickman,"  a violent felon who hopes to help move the Proud Boys towards a more extreme ideology.

A January 19 post on the Proud Goys channel reads, “The Biden presidency will usher in a new age of tyranny for White Americans and Whites worldwide. The FBI has become a plaything of the radical left and they're on a maniacal witch hunt for non-conformist right-wing white people. These satanic neo-liberal elites see Trump supporters as the last vestige of White America standing up for its own interests.”

Tarrio has pushed back against this narrative several times. In 2019, he wrote on Telegram, “Dontcha get tired of blaming everything on the jews?... It gets old bruh.” In August 2020, Tarrio decried the racism on the Proud Goys channel: “Telegram is full of extremist right (racists against blacks, haters of jews and lovers of all thing nazi, [all sic] and homophobic) most of them deserve to be banned from other platforms.”

In late January, a user on the ProudBoysUncensored Telegram channel, a popular offshoot channel known for its racist and antisemitic content – which boasts 15,000 subscribers and is often picked up by Proud Boys chapters -- posted this argument in favor of embracing the Proud Boys’ most xenophobic and bigoted tendencies: “The traditions of our culture must be preserved. We reject multiculturalism. We are not a ‘melting pot.’ Western nations have been widely recognized as multicultural societies. This is a lie told by those who wish to destroy us. Europeans are the architects of Western culture and we will honor our forefathers by rejecting the degradation of our culture in the name of tolerance.”

Followers of QAnon—the sprawling conspiracy theory that has infected American discourse --are grasping for meaning in a post-Trump world. QAnon was tightly tethered to a Trump presidency, casting the former president as the ultimate hero who would use his executive powers to unleash a “storm” of justice on a Deep State cabal of pedophiles and child traffickers. On January 20, 2021, former President Trump departed the White House for Florida, leaving the theory in tatters, and a painful online reckoning in his wake.

Today, some followers of QAnon are looking for scapegoats; some are calling it quits. Others remain convinced the “The Plan” will reveal itself on March 4, 2021, when Trump will be inaugurated once again.

The conspiracy is rooted in an element of historical truth: Prior to Franklin Roosevelt’s second term, inaugurations were held on March 4th, which allowed lawmakers more time to count electoral votes and to travel to and from the nation’s capital. The conspiracy also holds that Donald Trump will stay in office until 2028, that this plan was designed by President Trump, Mike Pompeo, General Flynn and John F. Kennedy Jr. (who is apparently alive), and that the military is currently controlling the country because of the Insurrection Act of 1807.

While QAnon supporters have posted scattered calls for national rallies, there is no indication of coordinated mobilization.

At least nine people associated with the Oath Keepers have been charged with conspiracy in connection with the January 6 attack, with prosecutors alleging that the defendants coordinated to travel to Washington, D.C., breach the Capitol and disrupt the certification of the 2020 election. Seven of the defendants were visible wearing combat gear and participating in a tactical “stack” as they moved through the crowd towards the Capitol.

Despite this clear evidence of involvement, the militia movement has by and large not reckoned with the role their conspiratorial beliefs and violent rhetoric played in the leadup to the insurrection. Instead, many simply dismiss the events of January 6th as the work of antifa or a false flag operation. Meanwhile, they are doubling down on conspiracies that the election was stolen and that the Biden administration is a nefarious entity seeking to destroy the American way of life.

These claims signal the return of the militia movement’s traditional animosity towards the federal government – which they largely downplayed during the Trump administration.

Oath Keepers founder Stewart Rhodes, meanwhile, has accused President Biden of being a Chinese puppet, drawing parallels between the Biden administration and the British government at the time of the American Revolution, calling it an “occupying enemy force.” Prior to January 6, Rhodes warned that if President Trump did not invoke the Insurrection Act, the Oath Keepers and others would have to fight a “bloody horrible civil war.” Rhodes has persisted with this violent rhetoric, encouraging people to declare the administration illegitimate, unite in mass nullification and noncompliance, and prepare their communities for the moment when “they come for you.”

On February 9, a North Carolina news outlet reported that the state’s Oath Keepers chapter had disbanded its branch, with its leader, Doug Smith, citing the events of January 6 and disagreements regarding the national organization’s stances in the wake of the 2020 election. Smith says the group is planning to reorganize and rebrand under a different name.

The events of January 6 left leaders of the white supremacist Groypers, or "America Firsters," furious with the Republican Party and major tech companies. The Groypers, young white men who promote American nationalism alongside racist and antisemitic views, espouse that the Republican party betrayed Trump and his supporters. They have expressed particular anger with former Vice President Mike Pence because he refused to challenge the 2020 election results, and with the GOP more generally for allowing Trump supporters to be arrested and "persecuted." They are currently channeling their frustrations by pledging to help destroy the Republican party.

While some Groyper-related revenue streams have been cut off, others remain. Groyper leader Nick Fuentes and the Red Elephants’ Vincent James, who is also an America Firster, have both been de-platformed by DLive, a livestreaming site that brought in a sizable amount of money for both. Fuentes, however, is billed as the keynote speaker for the America First Political Action Conference on February 26 in Orlando, Florida.

There now appears to be tension between leaders of the Groyper movement. On a February 11 livestream video, Patrick Casey, another Groyper leader and former head of the now-defunct white supremacist American Identity Movement, criticized Fuentes, saying that the conference in Florida should not be held since Fuentes and other Groypers who attended the January 6 event were under scrutiny and vulnerable to possible informants and FBI surveillance.  Before the fallout, Casey had urged patience. He wrote on Telegram on January 23, "I maintain that Trump was the beginning, not the end. What was set into motion in 2016 will culminate in our eventual victory—we just have to be patient, as we really haven’t a clue how things will play out."

As noted above, people with ties to known extremist groups made up 25 percent of the 212 insurrectionists identified by the Center on Extremism.

This means the other 75 percent, or roughly 160 people, were not roused to violent action on January 6 by the leader of any one extremist group. They are the product of weeks and months and years of incitement, lies and repeated (and repeatedly disproved) conspiracy theories. They are a new breed of extremist, one foundationally animated by devotion to President Trump, placing him over party or country. They are living in an entire ecosphere of disinformation, lies and conspiracy theories, fertilized by Alex Jones, the former President and his enablers, and many others.

This extremist ideology continues to thrive online, as adherents build “Patriot” pages where they can broadcast lies about a stolen election and plan for a new “Patriot Party” to counteract the “treachery” of the Republican legislators who refused to bow to a mob.

In recent weeks, many of those same public officials have come under attack; politicians and their families have been targeted with violent death threats. Their offices have been vandalized, and their private residences subjected to harassment online and by phone.

Pro-Trump extremists appear to target members of both parties, but they currently have a special ire for Republicans. Former Vice President Mike Pence has been called a “traitor” and “Judas” online, and on January 6, pro-Trump extremists chanted, “Hang Mike Pence” as they ransacked the U.S. Capitol.

This loose collection of individuals could be a significant factor in the extremism landscape for months – if not years—to come.