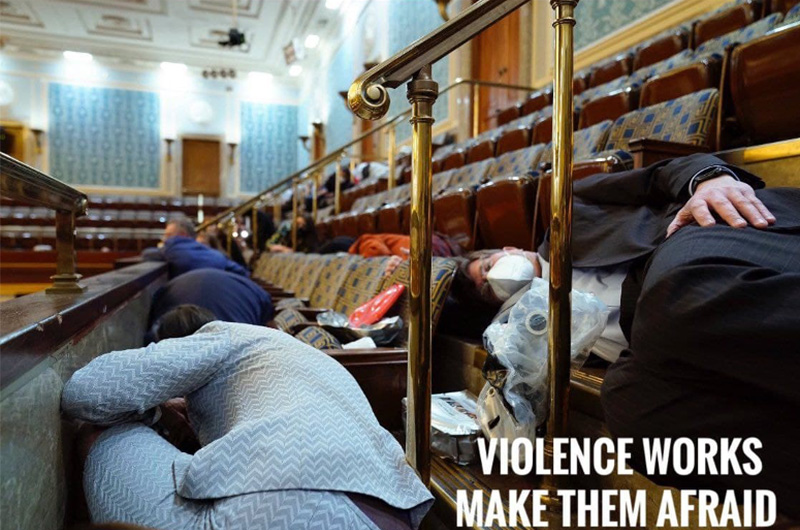 On Wednesday, January 6, 2021, pro-Trump extremists, including some identified right-wing extremists, stormed the U.S. Capitol building, interrupting the Congressional session affirming the election results and forcing a partial evacuation. The nation and the world watched the chaos unfold, including scenes of the mob on the Senate floor, in House Speaker Nancy Pelosi’s office, and swarming the Capitol steps. By the time the siege ended, four people were dead: three from “medical emergencies” and one, a pro-Trump extremist, who was shot inside the Capitol.

The Center on Extremism has uncovered a range of posts reacting to the event and spreading conspiracies and memes. These have appeared on platforms favored by extremists, including MeWe, Parler, militia forums, Twitter, and, most overwhelmingly, on Telegram.

Calls for Further Violence or War

The January 6 event was only the latest in a series of large rallies and events held in Washington, D.C. since the November 2020 election. On November 14, 2020, thousands of Trump supporters attended the Million MAGA March, contesting the election results. On December 12, 2020, supporters and some right-wing extremists demonstrated at various pro-Trump rallies.

Nevertheless, extremists saw the mob action on January 6 as a more concrete step towards conflict. Jacob Wohl, trickster and disinformation activist, posted to Parler claiming the U.S. has been in a civil war for several years, casting “the left” as the antagonists. The right, Wohl wrote, has finally “answered back”. A white supremacist Telegram user that posts accelerationist content wrote that the January 6 attack on the government will not go unanswered and encouraged followers to “keep your head on a swivel and your rifle by your side, war is coming.” 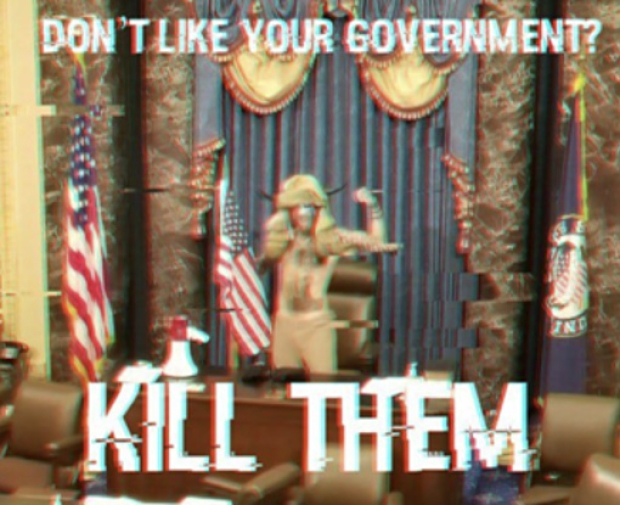 On militia forums, many users shared their belief that war is coming, and some encouraged people to be prepared for further action. In the Oath Keepers private chat, one user wrote, “I believe the war has started. The only way we get justice for ourselves and protect the Constitution is if we begin fighting back.” Another posted, “It sucks that I have to say this…but, God bless the Patriots taking our country back from a thieving Swamp…The God damn crooked politicians brought this on themselves.”

Later in the day, a user wrote, “Need a plan forward? Storm DC with armed patriots as a start. The left will get it, including the MSM [mainstream media], who should ALSO be surrounded by armed patriots.” Another responded, “We have enough martyrs, now we need soldiers, make the other guy die.”

On mymilitia.com, one user wrote, “Today should serve as a wakeup call to all Freedom loving Americans. It showed the thief’s [sic], I mean politicians, that there are many patriots that are willing to do what must be done to save our country…Get ready because this is only a taste of what’s to come.” Added another, “I will join up with my fellow Americans and run the capital [sic] again but with strength…It’s time to show them who we are.”

Across militia forums, many people cheered the actions of those at the Capitol, praising the trespassers as patriots who were willing to “stand up” to politicians and the government. A poster on mymilitia.com wrote, “The tactics and intimidation and the media coverage of this event just goes to show that that is the only language that the gutless politicians understand and respond too [sic].” Another poster, who claims to have attended the rally, pushed back against popular right-wing conspiracies regarding antifa’s role in the attack on the Capitol. “It wasn’t andy tifa or non of that [sic],” they wrote. “It was angry Americans. So please stop this BS. No conspiracy, were tired, were angry. Were tired of being lied to and lied about” [sic throughout].

Meanwhile, on the Three Percenters – Original forum, one user wrote, “We have the right as Americans to take our country back and dismantle the government that does not work for us…Yesterday I saw the pussies of the world grow a set and row [sic] the country we are sick of your shit. Now it’s time to join the proud boys cause they are the ones making moves.”

As part of his constitutional duties, Vice President Mike Pence was presiding over the ceremonial confirmation of the November election when the rioters stormed the Capitol. In the days leading up to the certification, President Trump and his allies repeatedly called upon Pence to reverse or reject the election results, based on the groundless claim that the November election was fraudulent. In his Wednesday morning address to rally attendees, President Trump directly asked the Vice President to overturn the election. Vice President Pence certified the results Thursday morning.

Pro-Trump extremists and right-wing pundits expressed their disappointment, some going as far as to call for violence against Pence. During the siege, pro-Trump extremists were heard chanting “hang Mike Pence.” Lin Wood, vocal Trump ally, lawyer and conspiracy theorist, posted to Parler that Pence should be the first to meet a firing squad. Online posts across extremist platforms called Pence a traitor. One Telegram account circulated a video of Pence with the caption, “press S to spit on Pence.”

Claims that the surge was started by antifa and not pro-Trump extremists surged on Wednesday, fanned by personalities including Laura Ingraham. “Reports” of busloads of antifa infiltrating the ranks of pro-Trump extremists, antifa provocateurs being the first to break the police barrier and other claims attempted to deflect blame and present pro-Trump extremists merely as opportunists rather than insurrectionists. A Parler user with 310,000 followers that frequently posts conspiracy content claimed the shooting of Ashli Babbitt, the Trump supporter who was shot inside the Capitol, was ordered by a “leftist radio host” asking for police to shoot Trump supporters. 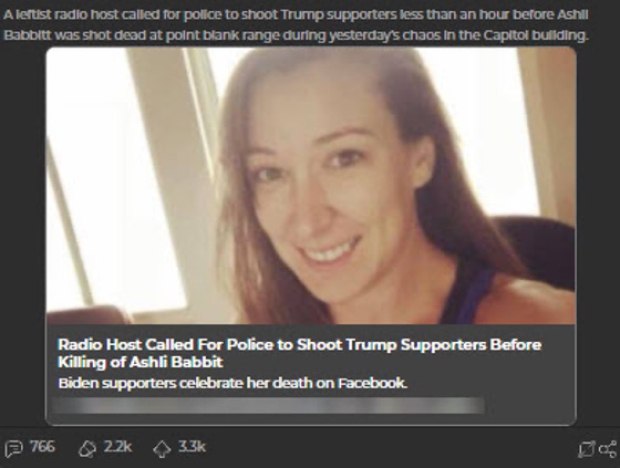 Conspiracy theorist and InfoWars host Alex Jones, who was at the Capitol, posted a video with eyewitness accounts of alleged antifa incitement and claims that “95%” of the action was caused “provocateurs.” Gavin McInnes, founder of the Proud Boys, claimed on Parler that antifa started the storming effort, and the Trump supporters simply went along with it. 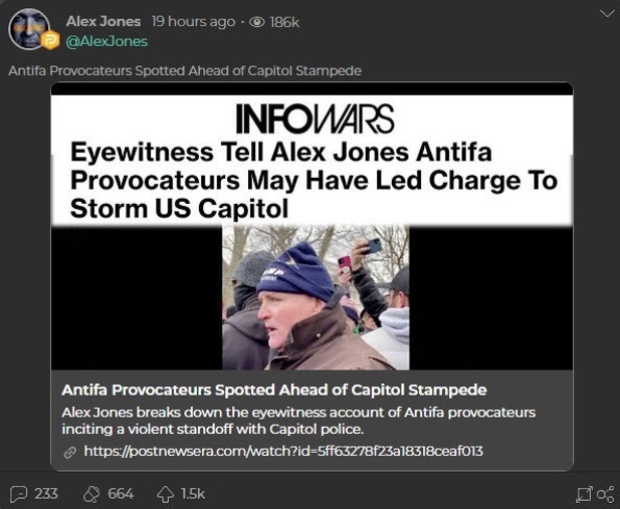 These claims were echoed across militia and anti-government online spaces, where some claimed that the Capitol siege was actually the work of antifa provocateurs who were impersonating “patriots”. Some asserted that those photographed after infiltrating congressional chambers did not look like patriots, that they were actors, or shared old memes in which antifa purportedly encouraged supporters to dress up like Trump supporters. This popular theory flies in the face of the Proud Boys’ well-documented announcement that they planned to dress “like antifa” for the January 6, 2021 event in Washington.

A number of posters implicated law enforcement agencies in their conspiracies, with some saying that police escorted antifa into the Capitol on January 5, 2021, or that police were willing to let patriots into the building as part of a set up.

In the aftermath of the mob action, white supremacists online drew direct parallels to police responding to Black Lives Matter or other social justice protests, claiming police stood back and let “BLM and Antifa rampage” but attacked Trump supporters in the capitol with unwarranted force.

Nick Fuentes, white supremacist and leader of the Groyper Army, posted a series of tweets asking people to compare the actions of the mob to “the transgressions of Antifa/BLM” and claims the mob was not violent. Joe Biggs, a self-proclaimed “American Supremacist” who has 58,000 followers on Parler, posted that if this were BLM there would be “riots” and the media would “adore it and coddle it.” 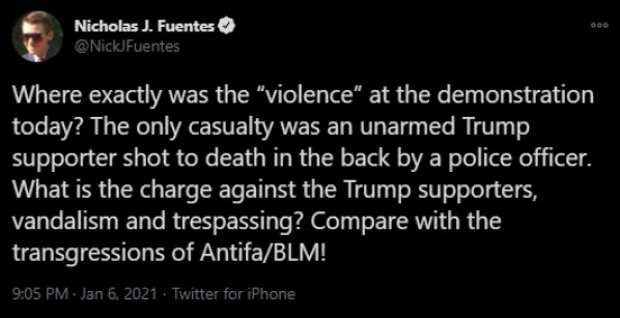 Some extremists view the shooting death of Babbitt, a vocal Trump supporter, QAnon adherent and Air Force veteran who died inside the Capitol, by Capitol police as a political assassination. One popular white supremacist Telegram channel claims the shooting was personally ordered by Vice President Mike Pence, while Patrick Casey, leader of the now defunct white supremacist group American Identity Movement, compared the shooting to the murder of George Floyd and lamented that “an unarmed white conservative girl is executed by the state while peacefully protesting, pundits and journalists imply that she had it coming.

Right-wing commentator Cassandra Fairbanks called the shooting a police murder of a veteran to protect the elite, referring to the law enforcement officer as “a piece of shit.” Antisemitic channels blamed the shooting on the ZOG (Zionist Occupied Government), urging followers to spread the message that ZOG is “killing unarmed White Women,” and reminding followers, “White people can and will rise up.”