Extremists React to Trump Dinner with Ye and Nick Fuentes 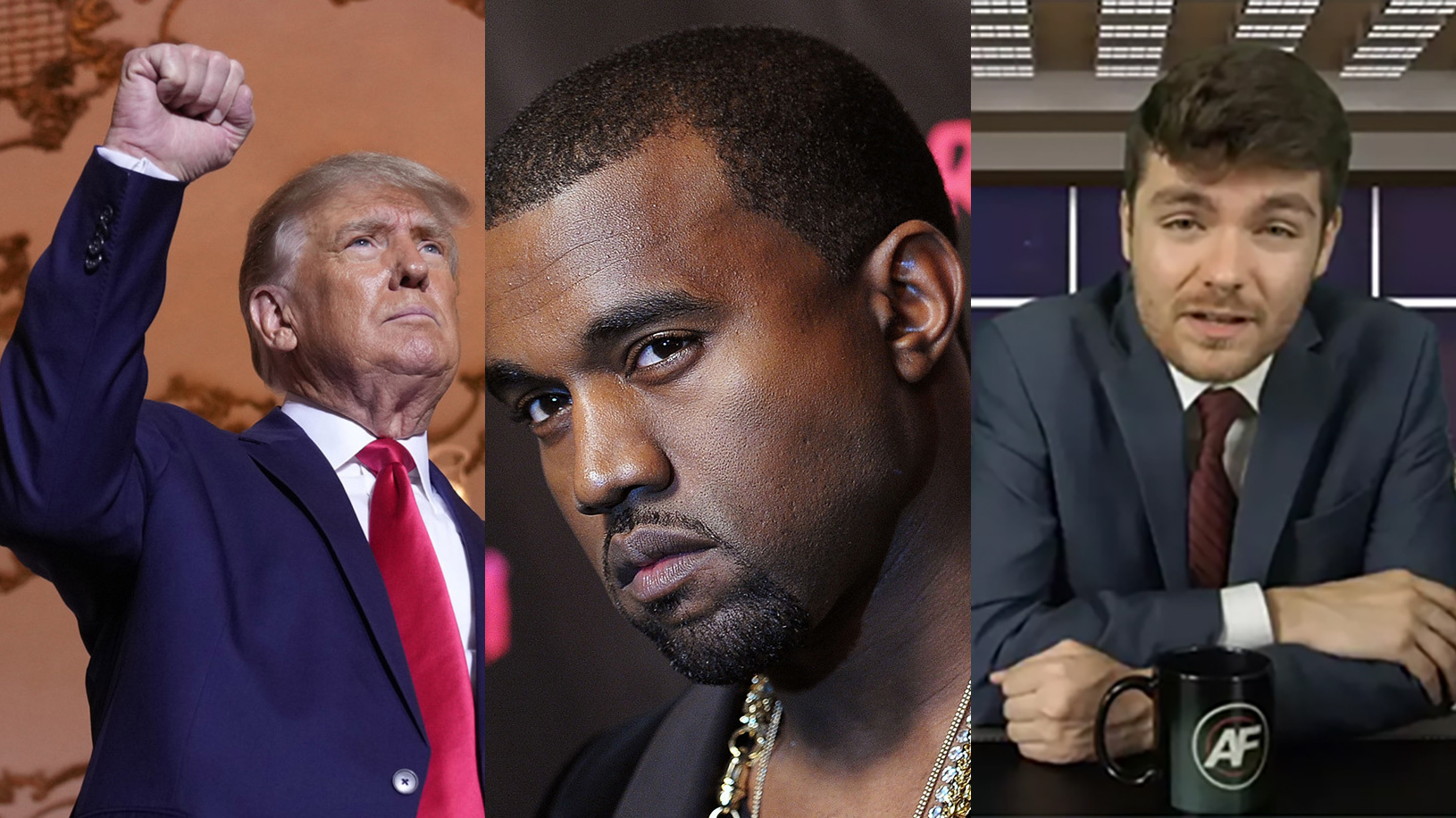 On Tuesday, November 22, 2022, former President Donald Trump hosted white supremacist and Holocaust denier Nick Fuentes and rapper Ye, formerly known as Kanye West, at his Mar-a-Lago home. Trump’s willingness to associate with figures who have repeatedly spread antisemitic and white supremacist tropes is deeply concerning and has not gone unnoticed by extremists.

Fuentes, a white supremacist and rabid misogynist who attended the 2017 “Unite the Right” rally in Charlottesville, has repeatedly spread racist and antisemitic conspiracy theories. Despite his history of antisemitism, he has forged alliances with a variety of far-right figures, including some GOP officials.

Ye, who announced his bid for the presidency two days after having dinner with Trump, has been embroiled in controversy for weeks after making numerous antisemitic and other inflammatory remarks. He was briefly locked out of his social media accounts and lost his partnerships with Gap, Adidas and Balenciaga.

In the days following the dinner, Trump attempted to distance himself from Ye and Fuentes, writing on Truth Social, “This past week, Kanye West called me to have dinner at Mar-a-Lago. Shortly thereafter, he unexpectedly showed up with three of his friends, whom I knew nothing about...The dinner was quick and uneventful.” In a follow-up post, Trump said, “We got along great, he [Ye] expressed no anti-Semitism, & I appreciated all of the nice things he said about me on “Tucker Carlson.” Why wouldn’t I agree to meet? Also, I didn’t know Nick Fuentes.”

Extremist reactions to the Trump-Fuentes-Ye dinner

Many prominent Groypers, a network of white supremacists who support Nick Fuentes, have abandoned former President Trump in favor of Ye’s 2024 presidential campaign. Several prominent Groypers changed their social media handles to signal the shift. Tim Gionet (aka Baked Alaska), changed his Telegram handle on November 24, 2022, to “Baked YE24 Alaska.” Other Groypers, like Tyler Russell and Steve Franssen, have done the same.

Groypers argue that Ye is more aligned with their “Christian values,” versus Trump, who has voiced strong support for Israel.  Groyper live streamer Matt Evans (aka Beardson Beardly) explained on Telegram, “If I have to compare Christian values, Ye is miles ahead for me right now. I’d love to see Trump fully embrace Christian conservatives in this country, and I hope he does, but until then, it’s YE24.”

During his November 26, 2022, livestream, Fuentes stated that the America First movement must distance itself from former President Donald Trump “to move forward in the service of Christ, in service of the truth, and service of America.” 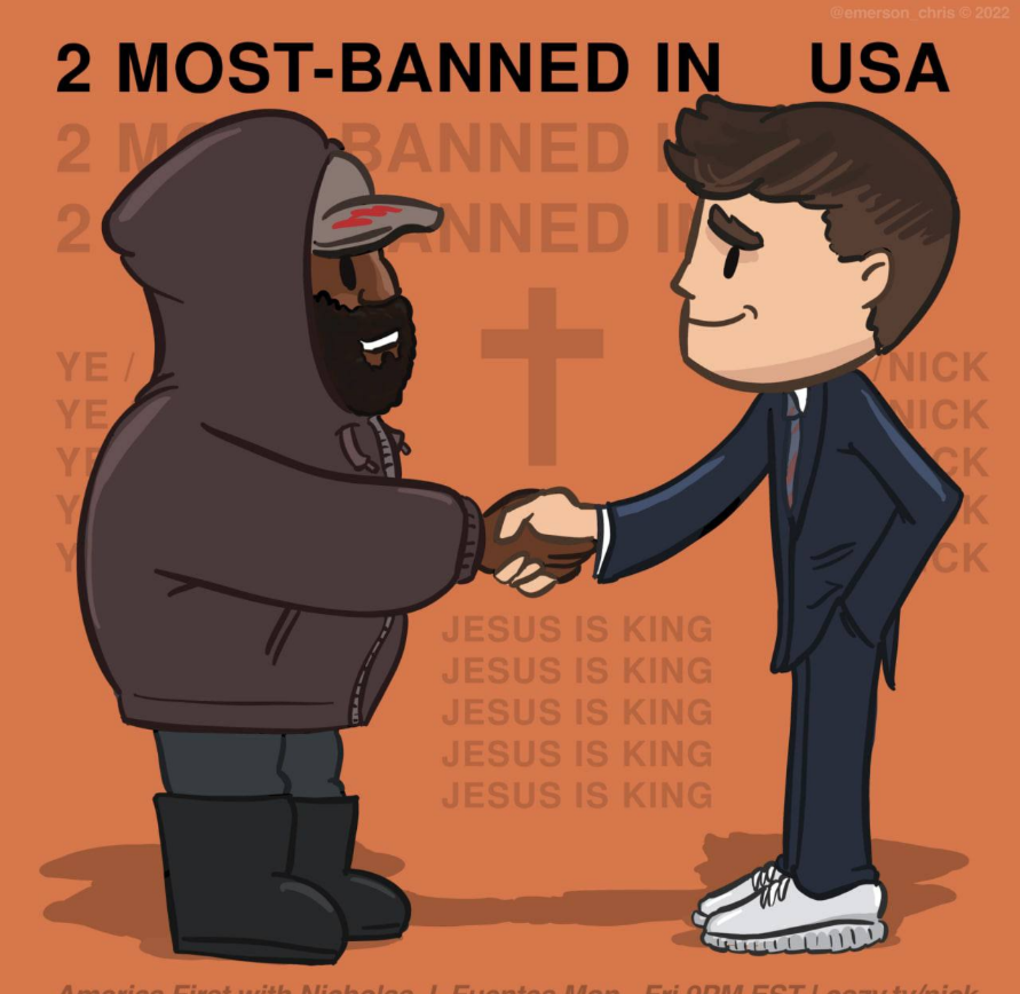 Groyper propaganda reposted by Nick Fuentes, which illustrates the collaboration between Fuentes and rapper Ye within a backdrop of “Christian nationalism.”

Not all Groypers agree with Fuentes’ decision to work with Ye. During Fuentes’ November 26 livestream, “Blaze Groyper” posted, “Hey Nick [sic] I’ve been a groyper since 2019 but what are you hoping to achieve by working for a degenerate rapper apart from infamy and status? Without us Donald Trump will be defeated and 2024 will be a repeat of 2020.” 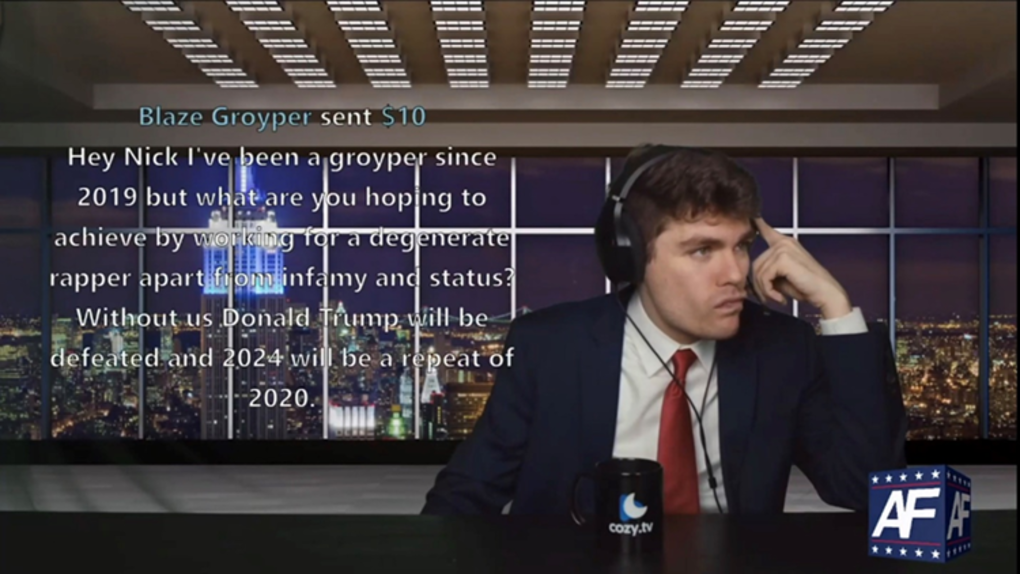 Other White Supremacists and Antisemites

Outside the Groyper bubble, many white supremacists dislike Fuentes, accusing him of being a grifter, criticizing him over his last name and what they perceive to be his Latino ancestry, while suggesting he is trying to hurt Trump’s chances in 2024.

“Nick Fuentes does not care about Trump or the millions of Americans who support him, because he selfishly undermined his campaign from the jump,” white supremacist podcaster Jason Kohne tweeted on November 26. “He knew what his presence would mean for himself (fame and money) and for Trump (association with every repulsive thing Nick has said).”

The League of the South has also been critical of Fuentes and Ye’s 2024 presidential bid, posting on Telegram, “All the pieces are on the table for a 3 way split tbh which will given Biden a clear path to 2024. Again this is why we support secession and the creation of our own Southern Confederacy [all sic].”

Some white supremacist leaders argued the dinner was a “hit job” arranged to damage Trump’s reputation. “My brief take on the Trump, Kanye dinner fiasco is that Milo [Yiannopoulos, Ye’s campaign manager], likely working on behalf of big GOP donors, got into Kanye's ear and used him as a mechanism to get Fuentes and Trump into the same room, thereby sinking Trump's 2024 run, making Ron DeSantis the uncontested GOP favorite, and making everyone involved look stupid and ridiculous,” wrote Mike Peinovich, a leader of the white supremacist National Justice Party, wrote on Telegram. “Trump would likely never have taken the dinner if not for some Jew donor telling him to. He was set up.”

Meanwhile, Andrew Anglin, the neo-Nazi founder of the Daily Stormer website, applauded Fuentes and Ye for their efforts to bring white supremacist and antisemitic beliefs into mainstream U.S. politics. “This Fuentes guy can basically just do whatever he wants and pull the strings on the entirety of the apparatus of American politics,” Anglin wrote on the Daily Stormer. “I have to say: there is a serious question about whether or not any man should have that kind of power.”

QAnon adherents have likewise latched onto theories claiming the meeting was a “setup.”

“Did Kanye West bring Nick Fuentes to Mar-a-Lago to try and guilt-by-association Trump with him?” one QAnon influencer wrote on Telegram. “This is beginning to sound like another plot to give the media an excuse to demand that Trump "denounce white supremacists" for the 10 billionth time.” 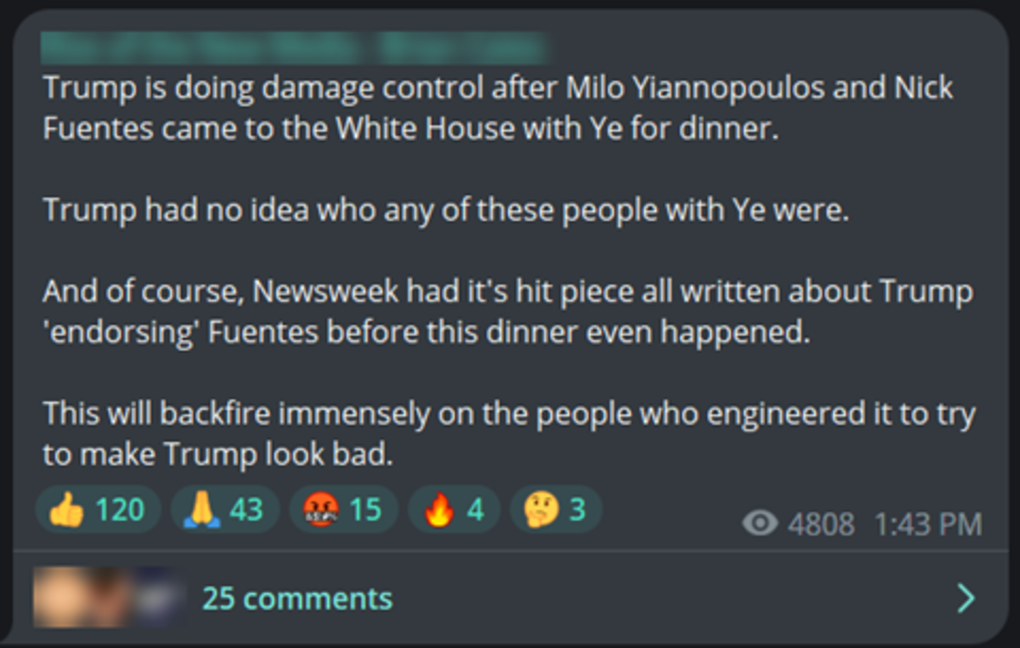 Others speculate that the meeting and resulting fallout were orchestrated by Trump and his team in order to distract from his efforts to expose and dismantle the “Deep State.”

“Classic POTUS- give fake news a hint of some juicy, potentially damaging gossip and let them spin their anti-Trump fakery for a week or two. In the meantime, Trump and whoever is on deck get on with the next phase of the Plan, without the interference of mainstream media. Has been this way since 2016. Stop worrying, God wins,” one QAnon adherent wrote on Telegram.

Reaction from the Proud Boys has been mixed, with some of the more extreme Proud Boy chapters and related Telegram channels saying that while they are “grateful” to Ye and Fuentes for pointing out so-called “Jewish influence” in U.S. politics and would like to see this viewpoint become more mainstream, they are hesitant to endorse Ye as candidate for 2024. Some overtly white supremacist Proud Boys offshoot channels simply dismissed both Fuentes and Ye.

As a 501(c)(3) nonprofit organization, ADL takes no position in support of or in opposition to any candidate for political office.