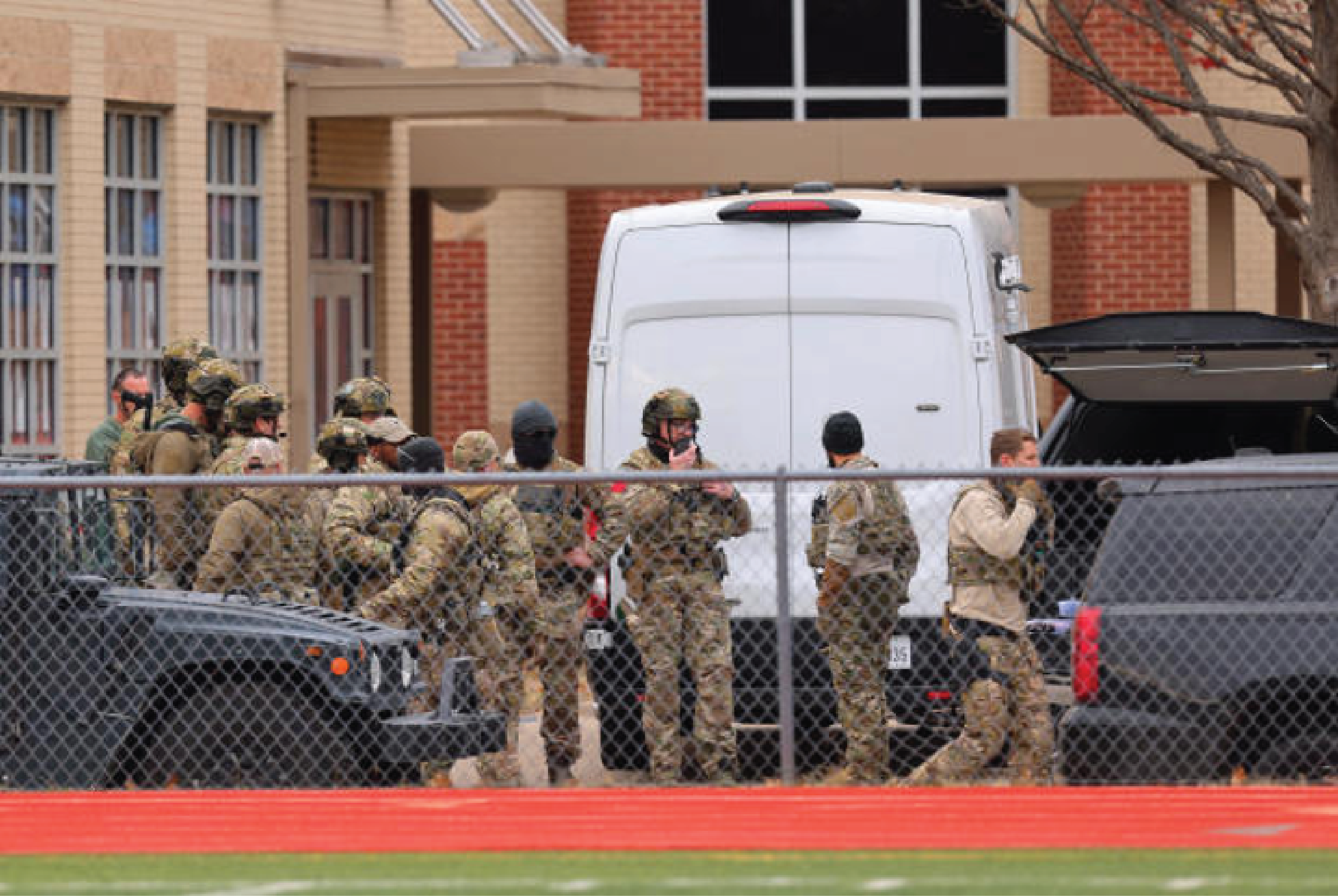 On January 15, 2022, a gunman entered Congregation Beth Israel synagogue in Colleyville, Texas, during Shabbat morning services. After a ten-hour standoff with local, state and federal authorities, the hostage taker, identified as 44-year-old British national Malik Faisal Akram, was pronounced dead at the scene. All four hostages were released, apparently unharmed.

Predictably, Islamist extremists immediately expressed support for Akram’s actions. Online, prominent Al Qaeda supporters described the hostage situation as “inspirational” and a warning to their enemies. Others, including Anjem Choudary, a British-based pro-ISIS Islamist preacher, reiterated calls to free Aafia Siddiqui, a Pakistani woman convicted of attempted murder of U.S. nationals, who is serving an 86-year sentence at a federal facility near the Colleyville synagogue, and whom Akram mentioned during the standoff. Siddiqui’s release has been a focus for non-extremist groups, as well, who allege mistreatment and fabricated charges.

Right-wing extremists are likewise attempting to exploit the Colleyville crisis to advance their own antisemitic, conspiratorial and bigoted ideologies – a clear indication that acts of antisemitism tend to inspire further expressions of antisemitism.

Holocaust deniers claim the Colleyville synagogue attack is yet another opportunity for Jews to “complain” about their victimhood, with some falsely stating that as Jews eagerly exaggerate the number of people who died during the Holocaust so too would they hype up the fear and impact of the Texas synagogue hostage crises. Some employed the slang term “muh,” meant to convey whining or complaining. One 4chan user posted, “Jews are attention seekers, pure and simple. They play the ‘Enough about ME... What do YOU think about me?’ card.”

On Telegram, one user on the channel Hyphen-Report sarcastically bemoaned, “Another Holocaust in progress!” Another adds, “i [sic] mean at this point it's literally a daily shoah [Holocaust], weird shit with ragheads kidnapping rabbis is just another glitch in a collapsing matrix.” 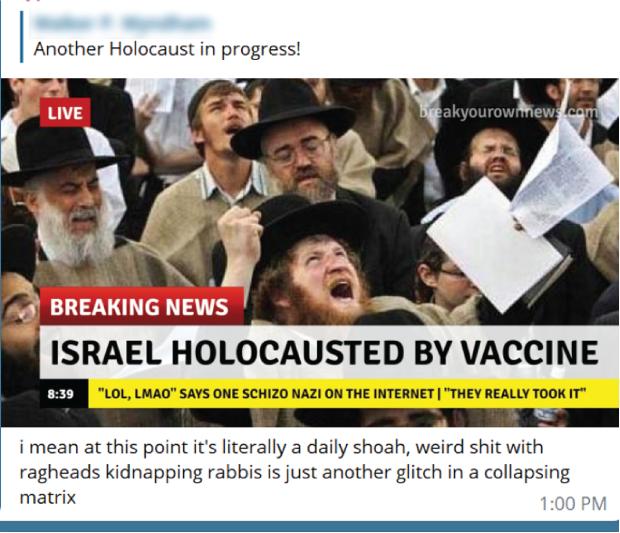 In the white supremacist channel, Murder the Media, one user wrote, “Oh no, hwhite [sic] supremecy [sic] in action. Those poor 50 people being held hostage. Their families will need money for therapy. 500 peoples families will need to be comforted. Those 5000 hostages will need money to afford therapy. I mean what will those 5 million people do if they can't afford to see a therapist. It's cruel to not give those 5 gorillion people enough money to see therapists for the rest of their lives.” On a channel linked to the antisemitic group, Goyim Defense League, they mockingly post, “Rabbi being held hostage at Beth Israel. All we know at this moment. Oi vey!”

White supremacists and other conspiracy theorists are claiming the crisis at Congregation Beth Israel may be just another “false flag” operation-- a trope which often gains momentum in this country following major (often violent) incidents -- arguing that the  U.S. government and others in positions of power, namely Jews, are staging events to elicit sympathy for their cause and justify future “punitive” actions, including enacting gun control measures, fomenting Islamophobia for political gain or the militarization of police.

In one Telegram discussion board on the white supremacist channel Murder the Media, one individual wrote, “Notice how no jews [sic] are hurt in this event.” Along similar lines, the Church of Aryanity, a white supremacist group seeking “to bring in racially aware, non-Jewish, White Aryans from all religious backgrounds” posted, “…This seems fishy, probably a false flag, muh evil Muslim terrorism so let’s bomb Syria and Iran.”

Although most Qanon adherents were distracted by former President Trump’s Saturday speech at the Arizona GOP political rally, some used the Colleyville standoff to tout QAnon “predictions,” posting in a one Telegram channel, QuantumSquirrel, “Amazing FAKE hostage situation in Texas ends seconds after Trump's Rally speech.   QAlerts.net told us to watch out for False Flags today. They warned us years ago.  Tsunami too today. Amazing all on the same day.  #CrisisActors.” QAnon influencer WhipLash347 posted, “TX (Fort Worth) Synagogue Hostage Situation today 1/15 is causing police all over the country to take action lol!! What a great cover for countrywide mass LEO/military deployment should anything get out of hand *giggle*” 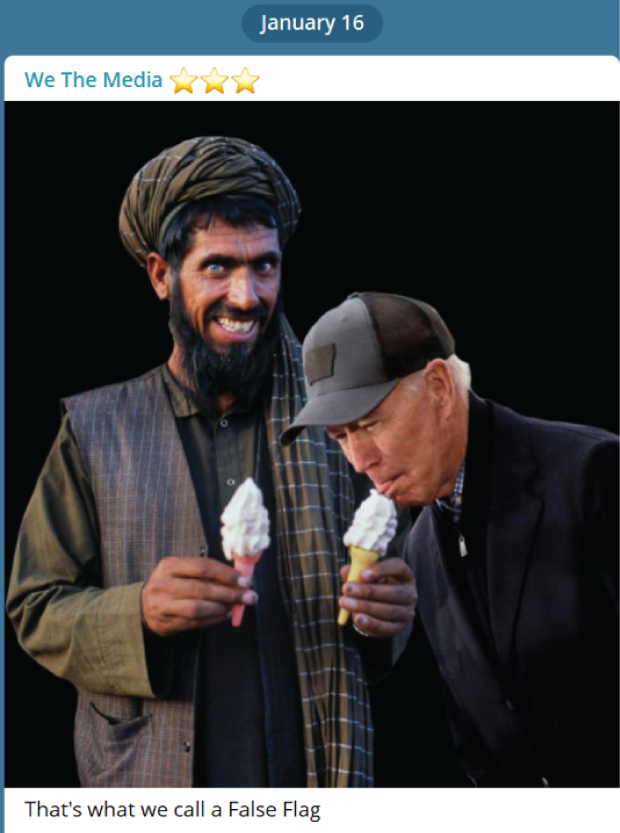 Disturbingly, as the hostage situation was underway, antisemites and other extremists were not so quietly hoping that the violence perpetrated against the Jewish community would be significant. Although many white supremacists and other bigots are also Islamophobes, the mantra, “the enemy of my enemy is my friend” was front and center amongst some of the calls for violence.

Using the Arabic term Inshallah, or “God willing,” Telegram channel Murder the Media posted, “Yes. My thoughts and prayers are with him too. Inshallah he will prevail... And detonate anyway, haha.” One user posted to the Vanguard News Network forum, “Why bother taking hostages? These are stinking kikes. The blue niggers [law enforcement] are just going to kill this guy, anyway.” He added, referring to the Tree of Life synagogue shooter who killed 11 people and wounded six others, “…Robert Bowers took care of this a whole lot better.” One poster in a white supremacist accelerationist Telegram channel wrote, “I am ASTOUNDED at this level of faggotry. Imagine yourself in that situation... holding a synagogue hostage, loaded gun in hand, surrounded by punkass feds trying to ear-hustle you into surrendering...How much of a pussy would you have to be to kill ZERO KIKES, injure ZERO KIKES, then end up dead yourself??? Fucking PATHETIC. LMBO.”

Laura Loomer, a far-right activist and anti-Muslim bigot, posted on Telegram: “It’s a Muslim terrorist. It always seems to be the case. Doesn’t it?” She also commented that “Jews need to stop voting for Democrats who are importing jihadis who hate them.” Former Proud Boys leader Gavin McInnes posted, “Hey Jews, maybe we should consider cutting Islam out of our ‘interfaith’ communities?”

Notorious anti-Muslim bigot Pamela Geller commented, “No surprise here. Religion of peace strikes again. Islamic Jew hatred is a central tenet of Islam. Steel yourself for the all the attendant ‘fear of reprisal’ propaganda and ‘islamophobia’ lies.” Robert Spencer, who leads the group Stop Islamization of America (SIOA) alongside Geller and also runs the anti-Muslim website Jihad Watch, called the hostage situation “a glimpse into the America of the future.” He added that “however this tragic incident ends, the establishment media will use it to push their gun control agenda and hector Americans about ‘Islamophobia.’”

Some believe the Colleyville hostage crisis was only given airtime and attention because of Jews’ purported power and influence. Erik Striker, writer for the neo-Nazi state The Daily Stormer, shared a series of posts on Telegram suggesting that the federal government was quick to respond to a local incident related to the Jewish community and that “No other group, least of all Whites, gets anywhere near this level of concern...It is in events like this where you see who actually has power and who does not.”

Stewart Meadows, a senior member of the white supremacist outlet, Vanguard New Network Forum, similarly suggests that the amount of political and media attention to this incident is connected to the influence Jews have over these institutions: “Yes, Biden must be worried now that four of his masters are in peril.” Other comments seek to compare this incident to other hostage situations and incidents such as last year’s deadly drive-by incident in Waukesha, a tragedy that is regularly exploited by white supremacists.

Shortly after news broke that the Colleyville perpetrator was non-white and possibly of Pakistani background, white supremacists immediately rushed to illustrate the negative impact immigration has had on our society, many squarely blaming the Jews for this “predicament.”  In one Telegram repost to the Church of Aryanity, a white supremacist channel, they underscore the fact that authorities “are negotiating with a foreigner.”

For white supremacists, immigration is perceived as an existential threat to their existence. Modern white supremacy is rooted in the belief that whites must fight against the imminent extinction of the white race at the hands of growing numbers of non-whites, who are being invited, controlled and manipulated by the Jews.

On white supremacist Telegram channel, The MindFarmer, posters are blaming Jews for the hostage crisis: “Kikes experiencing the diversity they brought here first hand [sic]. I sincerely hope he 86's [kills] the gremlins [Jews] and SWAT turns the Paki [the suspect] into swiss [sic] cheese 🧀.”