Critical race theory (CRT) is an educational framework used by some for discussing historical and contemporary racism in America – from the slave trade to Jim Crow to redlining to policing, and beyond.

Those who oppose CRT claim it imposes “guilt” onto white people, forcing white children and adults to take responsibility for horrors they did not personally perpetrate. Advocates argue CRT is not about placing blame, but rather about establishing a mechanism to address gaping holes in the American educational system and teaching all Americans the country’s full and complete history.

The clash over CRT is increasingly visible nationwide, with conservative groups organizing loud showdowns at local school board meetings, even in places where CRT is not part of the curriculum.

Beyond the mainstream, extremists are trying to harness debates around CRT to perpetuate the white supremacist conspiracy theory that the white race is under attack. Some extremist groups and individuals have taken real-world action to ban CRT and policies they believe to be influenced by CRT. This opposition has taken the form of flash demonstrations, protests, participation in board meetings, propaganda distribution and online posts. They are using this debate as an opportunity to promote well-known antisemitic conspiracy theories, widen the arena of perceived "anti-white" influence to include bedrock societal institutions, like schools, and to distribute propaganda they hope will lead to radicalization. 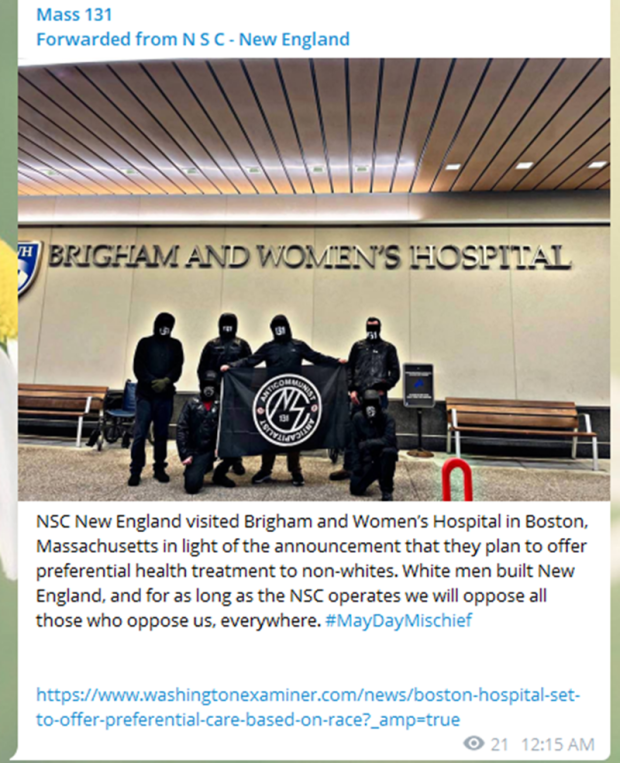 Extremists see CRT as a problem that is not limited to education, and which has significant influence on what they see as an expansive anti-white system. On April 30, 2021, members of the neo-Nazi organization the National Socialist Club participated in a flash demonstration at Brigham and Women's Hospital in Boston, Massachusetts, in response to an opinion piece written by two physicians which described a study that highlighted inequitable outcomes for cardiac patients of color at Brigham and Women’s hospital and suggested a potential response informed by CRT. Brigham and Women’s Hospital denies that this policy exists, posting  on their website, “Recent stories published online about an opinion piece written by two physicians misrepresent the values, goals and commitment to high quality care that the Brigham maintains for all our patients and their families. These stories do so by presenting misleading characterizations of a proposed project that aims to address racial inequities.” This kind of action by neo-Nazis outside of a hospital, well beyond the confines of a school, was a cynical attempt to equate policies aimed at making healthcare more equitable and accessible with policies that “target” the white race. 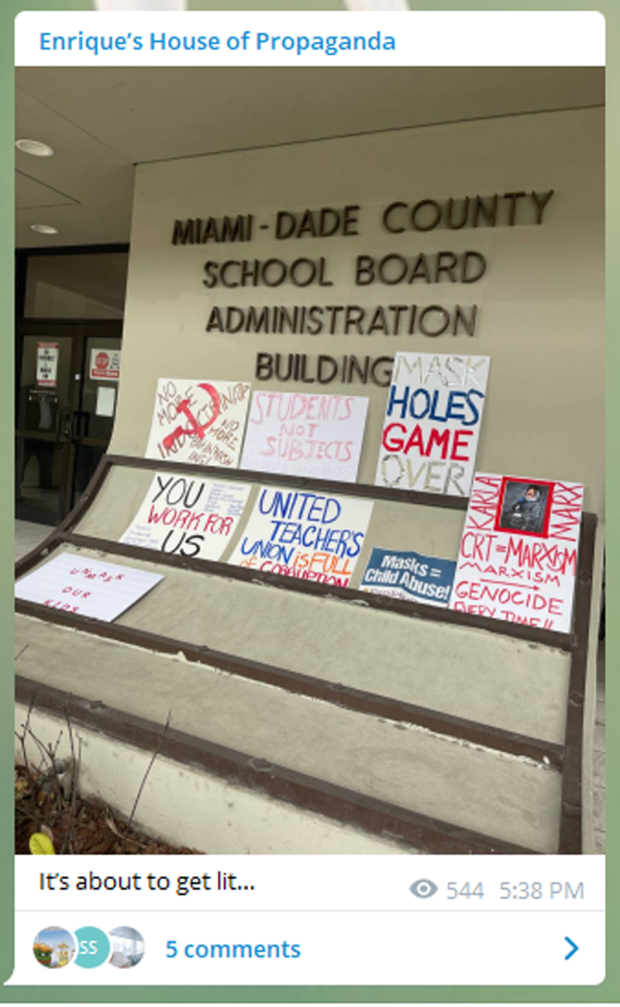 On June 23, 2021, a group of Proud Boys, including national chairman Enrique Tarrio, protested in opposition to CRT and mask requirements outside of the Miami-Dade County School Board Administration Building. In a photo from Tarrio’s Telegram channel, two signs at that protest read “CRT= Marxism, Marxism → Genocide Every time,” and “No more indoctrinating, no more brainwashing” written over the Soviet hammer and sickle. Proud Boys have a history of attending events that align with their politics to “provide security” and show their support for the cause at hand. They also have a history of violently clashing with counter-protesters, though no violence occurred at this event.

On June 3, 2021, a self-described white supremacist spoke at a school board meeting in North Carolina to show support for a bill that bans North Carolina public schools from teaching CRT and to voice his opposition to masks. The man, James Fulton, allegedly referred to himself as a white supremacist before giving his remarks to the board. This instance highlights the convergence of issues like anti-masking and CRT.  It also highlights the potential for anti-CRT events to attract extremists (and counter-protesters).

This debate has also attracted activist bigots who claim a common cause with those opposing the teaching of CRT. On May 11, 2021, in Los Alamitos, California, protesters, including staunch anti-LGBTQ+ protesters from out-of-district, gathered outside of the Los Alamitos school board office continuing a pattern of protest there going back at least three years. They were there to protest the implementation of supplemental social justice standards, which protesters saw as implicitly related to CRT, even though the standards are optional tools for teachers and administrators to teach students about respect and anti-bias. After local police advised that the in-person meeting be canceled, protesters showed up outside the empty school to protest. A local woman and her girlfriend attended to support the passing of the standards and, according to reports, were told by protesters that they were "...killing the white race" and "contributing to white genocide." These comments about white genocide suggest that some of these protesters were versed in white supremacist rhetoric.

In this case, people from outside of the school district, came to protest against CRT, which they view as “...a large indoctrination mess that you see going on from the progressive left, from decrepit, corrupt government entities wanting to destroy the family...” as one activist put it on a livestream.

On May 23, 2021, Litchfield Park, Arizona, saw propaganda containing heinous slurs against George Floyd and Jewish people. According to reports, Aryan Nations Arizona leader David Miner took responsibility for the leafleting and said the neighborhood was targeted for leafleting due to recent fights in Litchfield Elementary School District over CRT. In a separate incident on June 17, 2021, in Fairfax Station, VA members of the school board were targeted by antisemitic, racist and homophobic Klan propaganda. While there is no direct connection to CRT in Fairfax Station, a school board member expressed concern that this stemmed from recent rhetoric about the "indoctrination" of students.

These propaganda efforts attempt to infuse racist, antisemitic and homophobic ideas into these debates, and reach people who may be sympathetic to their ideology.

Extremists on encrypted chat rooms, forums and video sharing sites are using antisemitic conspiracy theories to explain why CRT presents an existential threat to the white race. Some extremists see CRT as one step further along the path of total “Jewish control” or an extension of putative Jewish attacks against the white race.

On June 21, 2021, users on 4Chan's anonymous /pol/ board suggested that the mainstream responses in opposition to CRT could fuel further awakening about white genocide:

One user wrote: "(((They))) finally pushed too far with the anti-white shit. Normies are waking up"

Another posted: "It is the BEGINING of something which could be a legitimate White Ethno-Nationalist movement in the United States. And any person who seriously gives a fuck about their race can and must support it for that potential Read (((Marcuse))) and (((Horkhimer))) anon this shit has been planned for decades se [sic]”

On BitChute,  Vincent James Foxx, a white supremacist who heads the California-based extreme-right “media” entity “The Red Elephants,” posted a video on the platform to discuss recent opposition to and support for CRT. In the video posted on June 22, 2021, Foxx says “...it’s almost always Jewish Americans who are pushing [Critical Race Theory]...,” continuing, "for some reason the white people funding these sorts of ideas and pushing this sort of rhetoric are always Jews, and they’re trying to drum up as many black people on their side as possible and non-white people on their side as possible...” James did not outright claim that CRT is a Jewish conspiracy but suggested that Jews are “pushing” CRT and gathering “non-white” allies to do the same.

On May 21, 2021, the white supremacist Telegram Channel “Big Tone's House” drew an explicit connection between CRT and antisemitism, stating: "Critical Jew Theory is much simpler than Critical Race Theory. It is as follows: It is critical to remove Jewish influence from society because it has turned us into a society of consumer bots with no culture, working towards our own destruction. That's it!"

On June 6, 2021, white supremacist Mike Peinovich's Telegram channel weighed in with antisemitic conspiracy theories surrounding CRT, stating in part: "Conservatives will only speak up about critical race theory and anti-Whiteness if they are Jewish or backed by Jews" referencing a conservative journalist, Christopher Rufo, who is credited by the New Yorker with "inventing” the current CRT debate. Peinovich claimed on Telegram that Rufo "works for the Jewish-neocon Manhattan Institute, whose chairman is the Jewish vulture capitalist Paul Singer." This claim by Peinovich suggests that opposition to CRT would not have become mainstream without Jewish buy-in, but conversely, he claimed on May 30, 2021, that CRT originated with “the fucking Jews.”

In a segment on conservative cable news channel Newsmax, Michael Savage, host of the Savage Nation Podcast, compared CRT to the racist policies the Germans established against  their Jewish citizens in the 1930s. During the segment, Savage, who is Jewish, said, “Attacks on white people is exactly what was done to the Jews in Germany in the 30s. Don’t fall for this garbage! This is the road to the death camps.”