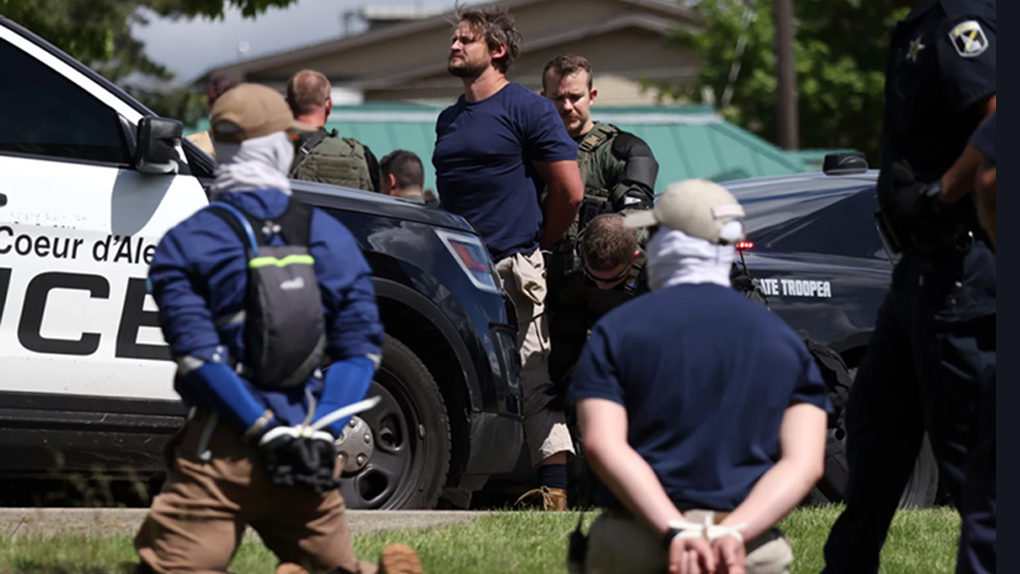 With Pride month in full swing, extremists are making news by targeting LGBTQ+ events, groups and people. The ADL Center on Extremism (COE) has tracked a spate of extremist activity around Pride celebrations nationwide, fueled in part by the claim that members of the LGBTQ+ community are pedophiles who are “grooming” children. “Grooming” refers to actions taken by abusers to sexualize, manipulate and coerce minors.

This narrative has been spread by the popular anti-LGBTQ+ Twitter account Libs of TikTok, which shares videos to generate outrage. In March 2022, Fox News host Laura Ingraham featured a Libs of TikTok video showing a sex education class, and called public schools “grooming centers for gender identity radicals.”
Some white supremacists, meanwhile, associate antisemitic and racist conspiracy theories like the Great Replacement with the LGBTQ+ community, alleging that LGBTQ+ culture and pedophilia are promoted by elites to encourage lower white birthrates in order to “replace” the white population with Black and Brown people.

Over the weekend of June 11-12, 2022, COE monitored seven in-person extremist activities targeting the LGBTQ+ community. Most notably, 31 members of the Texas-based white supremacist group Patriot Front were arrested on June 11 on misdemeanor criminal conspiracy charges after police stopped their U-Haul truck near a “Pride in the Park” event in Coeur d’Alene, Idaho. Among those arrested were the group’s leader, Thomas Rousseau. Patriot Front members have in the past targeted and stolen pro-LGBTQ+ signs and flags, and posted videos of members burning transgender pride flags. In one such video, a Patriot Front member says, “For those who destroy our nation, we will destroy your symbols and all that you worship, to think that we will lay down and perish, you are greatly mistaken. Burn ‘em.” 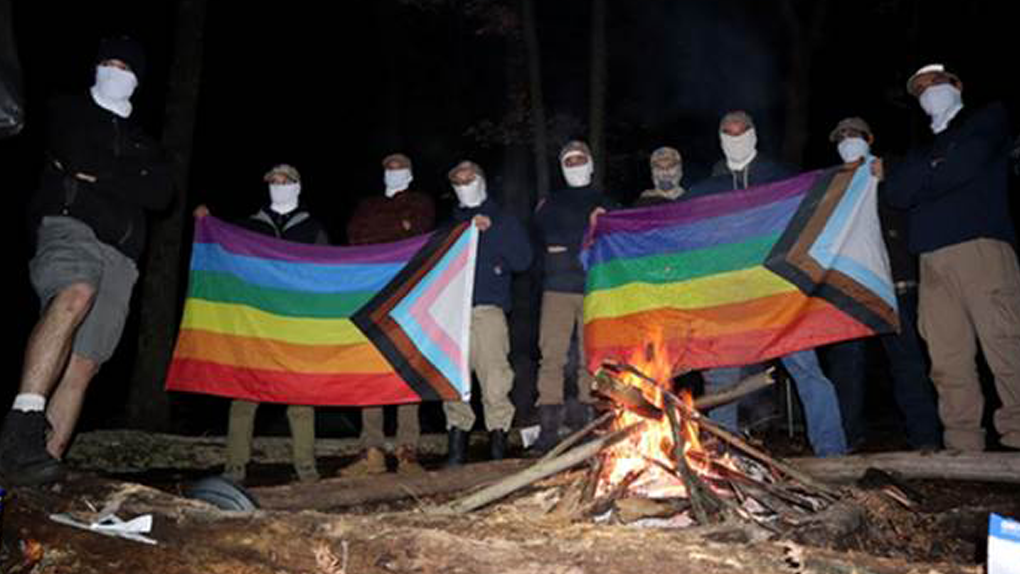 Closer to the “Pride in the Park” event, a group of people —some armed with assault rifles and covering their faces —displayed a banner reading, “Groomers are not welcome in Idaho.” In the park itself, around 30 white supremacist Groypers held a prayer circle to “distract” attendees from the “satanist” pride event.
On the same day, in Jacksonville, Florida, several individuals associated with local neo-Nazi group NatSoc Florida, demonstrated outside of a Hamburger Mary's restaurant, wearing shirts with swastikas and holding signs reading, “Child groomers work here,” “Fags groom kids,” “Grooming progress” and “Judaism allows child rape.” The group also distributed anti-LGBTQ+ fliers in several Jacksonville neighborhoods. Photos posted to the group’s Telegram channel appear to show the banners and fliers being made in the garage of the group’s leader, Joshua Dan Nunes. 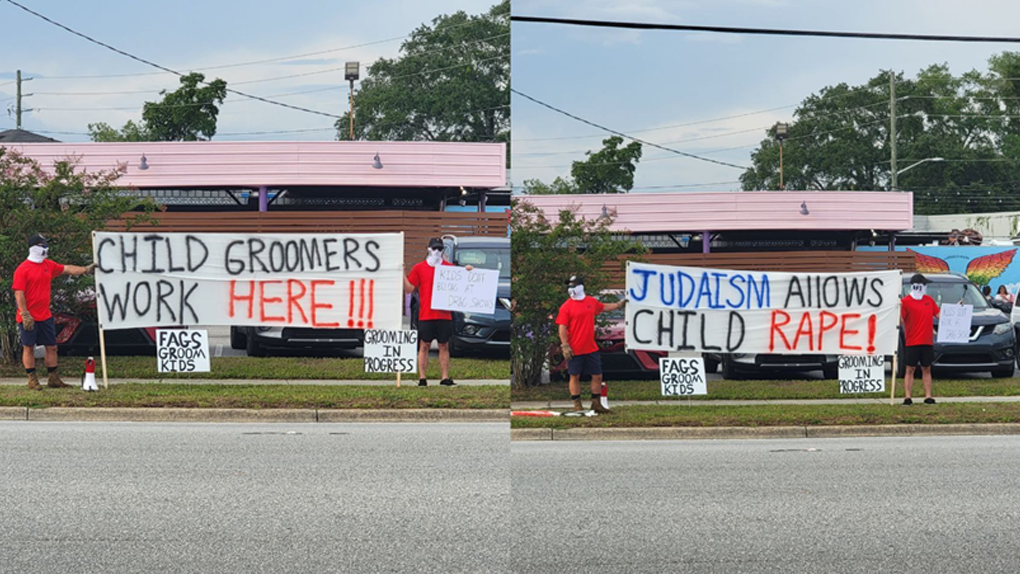 Also on June 11, in San Lorenzo, California, ten Proud Boys disrupted a “Drag Queen Story Hour” at the San Lorenzo Library. One of the Proud Boys at the scene wore a t-shirt displaying an image of an assault rifle alongside the phrase, "Kill your local pedophile." The Alameda County Sheriff's Office has since opened a hate crimes investigation into the incident.

The next day, approximately seven Proud Boys joined a protest organized by the far-right anti-LGBTQ+ group, Protect Texas Kids, at a Disney Drag Brunch event in Arlington, Texas. Attendees claimed the purpose of the protest was “protecting kids” from the LGBTQ+ community, despite the event enforcing a minimum age requirement of 21. Video footage from the protest shows a Proud Boys member verbally confronting an individual, yelling anti-LGBTQ+ slurs and calling him a pedophile. One Proud Boy screamed, “I did six months fucking locked up motherfucker, I’ll fucking do it again happily just to know I beat your motherfucking bitch ass you fucking pedophile, fucking faggot.”

A Georgia Youth Justice Coalition Pride event scheduled for June 12 was canceled due to “a credible death threat” made by “an anonymous individual targeting the rally’s location, time, and date,” according to a statement from event organizers. 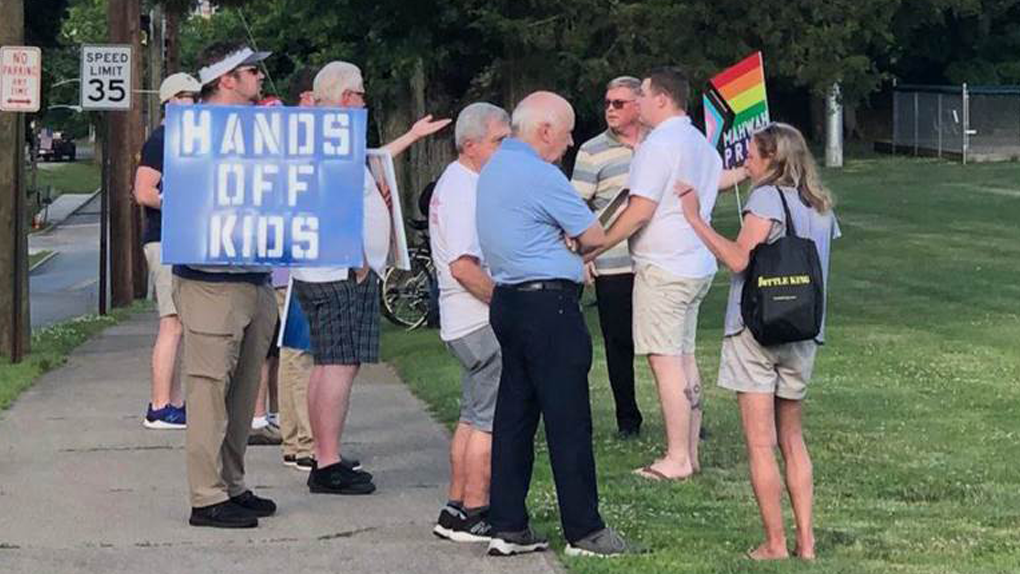 Previous Events
Incidents fueled by the anti-LGBTQ+ “groomer” narrative have not been limited to Pride month. Last month, several white supremacist groups staged similar protests across the country. On May 14, eight individuals associated with White Lives Matter Florida and the Proud Boys demonstrated outside of Disney World, referencing the company’s response to Florida’s “Parental Rights in Education”—also known as “Don’t Say Gay”—legislation. One individual carried a sign with the Star of David serving as the “o” in the phrase “pedo[phile] world.” 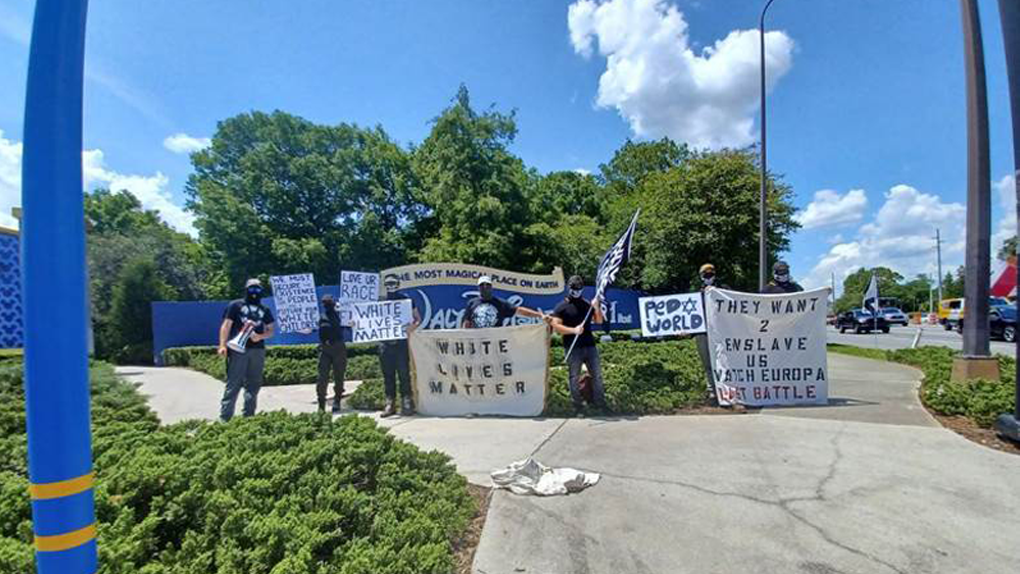 On May 7, approximately ten members of the Klan-affiliated white supremacist group, Aryan Freedom Network (AFN), held an “anti-grooming” protest in Austin, Texas. Participants wore AFN shirts, flew AFN flags and carried signs advertising their website. AFN leader “Daisy Barr” claims the group was there to protest “the grooming of children” at Doss Elementary School in Austin, which had announced that it would be holding a Pride week event. The school’s announcement was shared by the Libs of TikTok Twitter account. Significantly, this protest marked the first-ever display of public activism by the Aryan Freedom Network, signaling that anti-LGBTQ+ rhetoric now serves as a central rallying issue for at least some white supremacists.