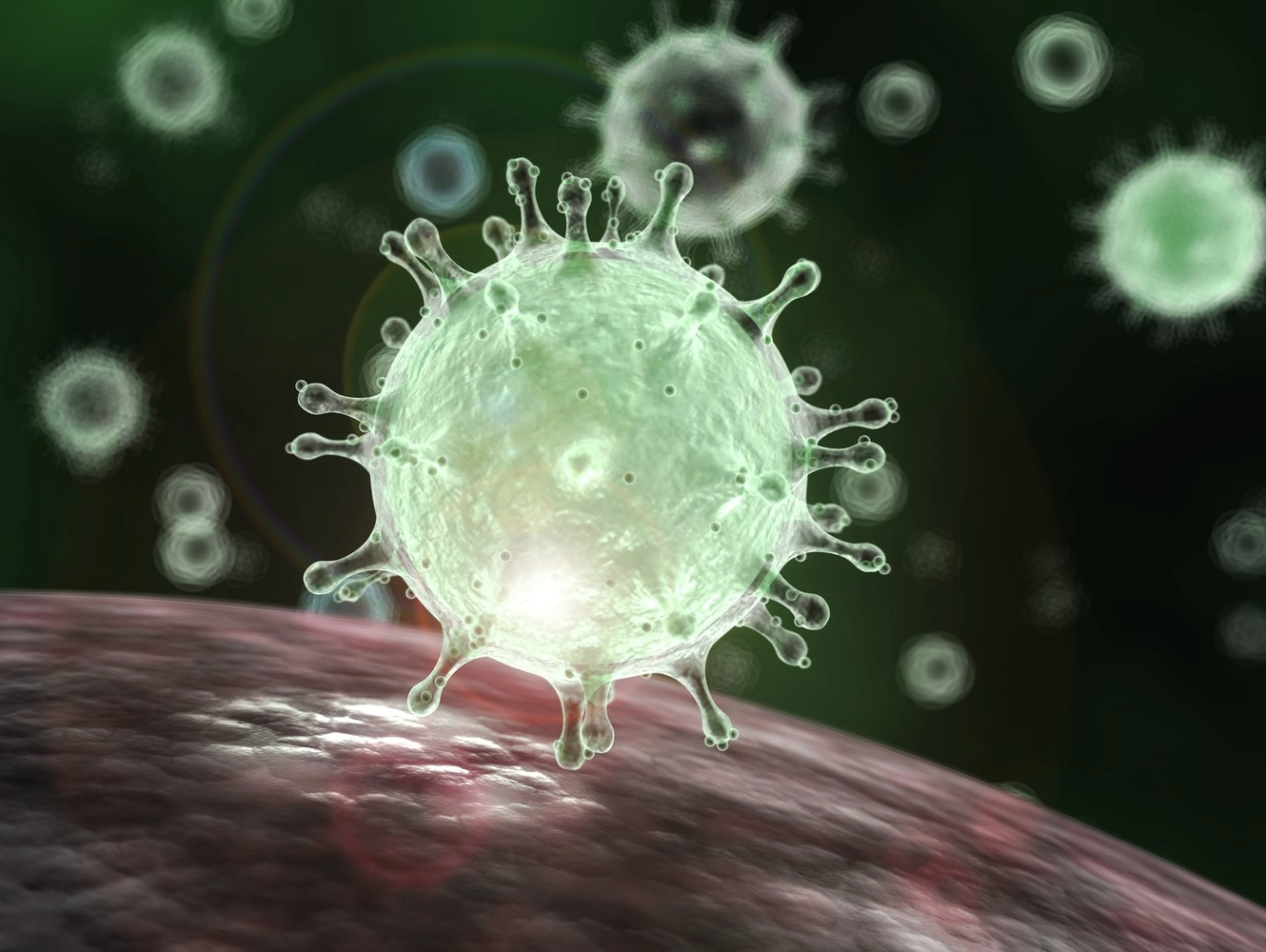 “Finally! Science has discovered a cure for the most insidious disease of our time…Jewishness.”

Shortly after posting this to Telegram, referring to a news report that three Israelis had been quarantined as possible carriers of the coronavirus, the same poster wrote, “3 down, 5,999,997 to go!”

As the number of confirmed cases of coronavirus surges globally, extremists continue to use the virus  to advance their bigotry and antisemitism, while also promoting conspiracy theories and even boogaloo (the white supremacist term for civil war).

For months, there have been posts on notoriously extremist-friendly platforms like Telegram, 4chan and Gab linking the coronavirus to racist and antisemitic slurs and memes.

Users across these channels regularly share racist messages or caricatures of Chinese people, mocking their eating habits, accents and hygiene. Posters on Telegram and 4chan appear to be cheering on the virus, hoping it will spread to predominately non-white countries, such as those in Africa.

Conspiracy theorist Alex Jones is using Telegram to spread videos warning that the coronavirus is an engineered weapon that will allow “globalists” to destroy the western world. In one video, he labels the virus as the “new 9/11 in planetary dictatorship plan.”

Others eagerly imagine the coronavirus as a bioweapon against their enemies. One Telegram user advised readers that if they get the virus they should go to the bank, take out hundreds of dollars in small bills, and, “take the shekels home and cough and lick them…Then go on a shopping spree!” In one meme shared on Telegram, a soldier and the virus are depicted preparing to fight together against people targeted by white supremacists, including minorities, the LGBTQ community, and “communists.” A 4chan commenter wrote, “Send the sick to Israel – if you already die at least take out as many Jews as you can.”

Extremists hope the virus kills Jews, but they are also using its emergence to advance their antisemitic theories that Jews are responsible for creating the virus, are spreading it to increase their control over a decimated population, or they are profiting off it. Some extremists have tied reports documenting Chinese efforts to safely dispose of victims’ bodies to cast doubt on the number of Jews who died during the Holocaust. 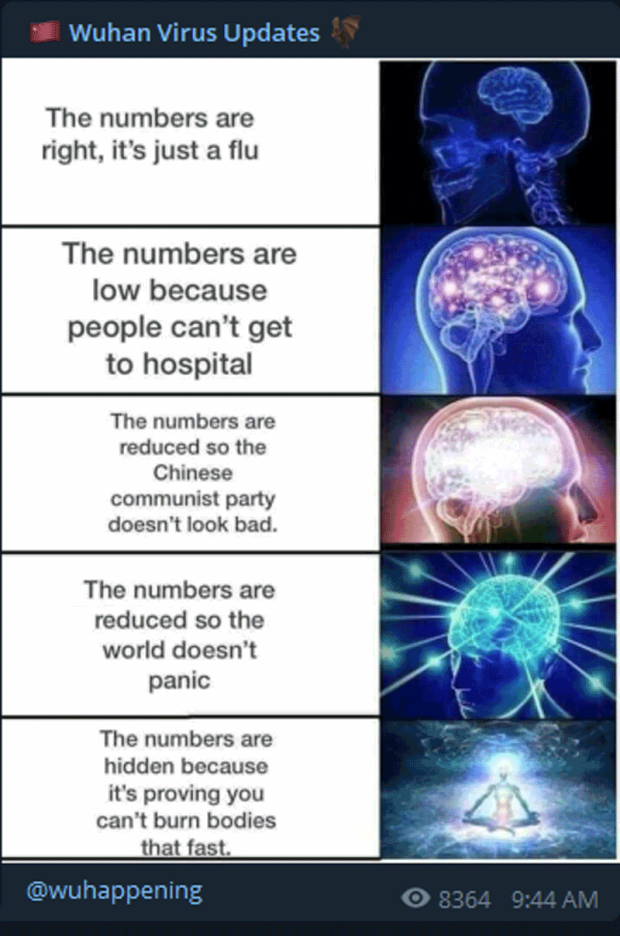 Echoing the extremists on fringe platforms, posters on mainstream platforms are sharing a range of conspiracy theories. On Reddit, Facebook, Twitter and YouTube, posters have called coverage of the coronavirus a hoax and a distraction designed to frighten the public or hurt Republican electoral prospects before the 2020 election, while others are arguing that the virus’s impact is far worse than authorities want people to think.

Meanwhile, conspiracies about the origins of the coronavirus are proliferating on Facebook, Reddit, YouTube and Twitter, where some assert that the virus was created as a profit driver by the Centers for Disease Control and Prevention (CDC) or by Bill Gates. Other users posit that the coronavirus is a Chinese biological weapon, though they differ on whether it was intentionally or accidentally released, and some suggest that the virus was manufactured by the United States and/or Israel as a biological weapon to target geopolitical rivals such as China and Iran.

People are using the coronavirus to further their political agendas: users on Twitter, Facebook and Instagram are claiming the virus is a tool for authorities and pharmaceutical companies to get people to accept vaccinations, while rumors on Facebook and Twitter suggest that Wuhan residents’ immune systems were weakened by 5G wireless networks, leaving them susceptible to the virus. Meanwhile, posters on Facebook and Twitter worry that the U.S. government will use the virus to impose martial law.

These conspiracies pollute information systems with lies, making it more difficult for people to understand what is actually happening and elevating people’s fear and anxiety levels.

Users on these mainstream platforms are also spreading bigoted messages. Many are sharing racist posts that denigrate Chinese habits and customs or blame the Chinese people for spreading the disease, using hashtags like “kungflu” and “batsoup.”

Similarly, people are using coronavirus news as an opportunity to disparage Jews on social media. After news broke that George Washington University had quarantined students who attended this year's AIPAC Policy Conference, some students reported they were being harassed on Twitter -- and even in person - with antisemitic messages. Other Twitter and Facebook accounts continued to echo the extremist rhetoric found on fringe platforms, accusing Jews and/or Israel of creating the virus to kill non-Jews or so that they can profit from the vaccine.

Individuals on Facebook and Twitter are also using the virus to advance anti-immigration rhetoric, arguing that until the virus is contained, the U.S. should end immigration and expand the travel ban to keep Americans safe. This online sentiment has made its way into the physical world, with a rise in racist, anti-Chinese incidents and a protest outside Sacramento International Airport.

The online response to the emergence of the coronavirus is just the latest example of how extremists and conspiracy theorists manipulate social media platforms to advance their agendas and spread hateful rhetoric and fear.