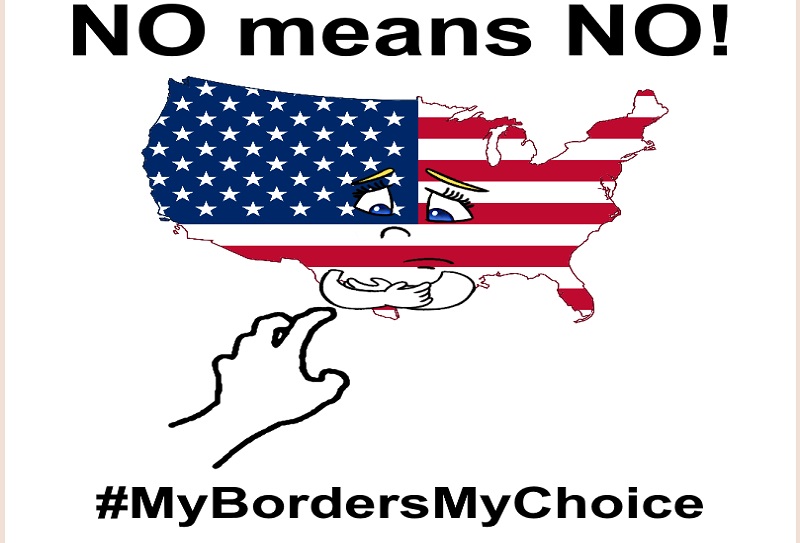 At a time when women have become increasingly vocal in addressing critical issues like sexual harassment and sexual violence, reproductive rights, workplace opportunity and equal pay, a group of far right trolls have deliberately appropriated slogans from the women’s movement in service of their own xenophobic cause.

The far right campaign appropriates “No Means No” and recasts “My Body My Choice” as “My Borders My Choice.”  Both are used in social media and fliering campaigns aimed at immigrants.

The appropriated slogans emerged as hashtags in December 2017 on online message boards like 4chan and Reddit, often accompanied by a map of the United States rendered as a sad-looking cartoon attempting to protect itself from a grasping hand reaching up from below its southern border.  Later versions feminized the cartoon map by adding features such as long eyelashes, making the rape analogy even more explicit.

International versions of the cartoon quickly emerged, featuring additional maps and translated into a range of languages.

In early 2018, as the meme spread, an anonymous anti-immigrant activist decided to turn it into a more organized campaign, polishing up the cartoon image and creating downloadable fliers for people to print out and post in their communities. He dubbed it the “My Borders My Choice” campaign, and emphasized a concerted effort to distribute fliers on the night of January 21 “on campuses & public spaces around the world.”  The organizer urged people to place the fliers in “feminism & SJW [Social Justice Warrior] related areas:  social science & psychology departments, women’s & gender studies departments, office doors of feminist profs, etc.”

“Ultimately,” the organizer explained in a post on Reddit, “they are not the intended audience, they are the key to getting the media to broadcast the message to the masses, to the public at large.”  He clearly hoped that targeting college campuses and “feminist” targets, would prompt a loud outcry—which would result in media attention and a broader dissemination of his anti-immigrant message.

In another post, he elaborated: “One poster taken by a brainwashed lunatic who will run to the media is all it takes to generate a local news story. Enough local stories generates a national story, enough national stories…generates a planetary shock-wave.”   When told that the posters were offensive for the sake of being offensive, the organizer responded that “the offense is a means to an end, not the end itself.”  In other words, he was deliberately trying to offend people in order to ensure his message would be spread as widely as possible.

News of the campaign and its graphics and hashtags spread on 4chan, 8chan, Reddit, Voat, GAB, Twitter, Facebook, Discord, and elsewhere. The organizer also reached out to the misogynists of the so-called “Manosphere” for support. The reaction was swift: on Twitter alone, the phrase “My Borders My Choice” was mentioned more than 8,000 times in the first several weeks of January. Prominent far right figures, including Jack Posobiec, Ben Garrison and Peter Sweden, promoted the campaign.

On January 21, My Borders My Choice fliers appeared on a number of college campuses and other locations across the country and beyond, particularly in Germany. Sites included Arizona State University, American University, Cal State Stanislaus, and St. John Fisher College, among others.  The fliers did garner publicity, though perhaps not as much as – or the kind -- the organizer had originally hoped for.

Much of the publicity the fliers did get centered on racism and white supremacy rather than the “pure” anti-immigrant message the organizer had hoped for.  This was a predictable result, because many of the people most likely to respond to and promote the campaign’s call were dedicated white supremacists.

Just as the earlier “It’s Okay to Be White” campaign  ended up largely in the hands of racists and white supremacists, so too did the “My Borders My Choice” campaign.  David Duke, for example, was quick to use the hashtag #MyBordersMyChoice, proclaiming that “immigration, along with nonwhite birthrates will lead to Whites becoming a hated minority totally vulnerable to the political, social, & economic will of anti-Whites.”  Others added hashtags such as #whitebeauty and #whitemagic. On GAB, one of the main documenters of #MyBordersMyChoice flier incidents was someone using the anti-Semitic screenname “Ari Shekelstein.”   The version of the flier that showed up at American University, included the website  of the virulently white supremacist Daily Stormer. This particular incident received considerable media attention.

These developments forced the organizer of “My Borders My Choice” to spend much of his time attempting to distance his campaign from racism and white supremacy, reaching out to journalists and posting a “game plan for stopping the misrepresentation of the poster campaign.”  But it was too little, too late. White supremacists are increasingly using the “Borders” hashtag alongside comments like “There’s nothing wrong with white people running their own countries” and “We must secure the existence of our people and a future for white children,” drawing the explicit connection between this campaign and their own racist ideology.