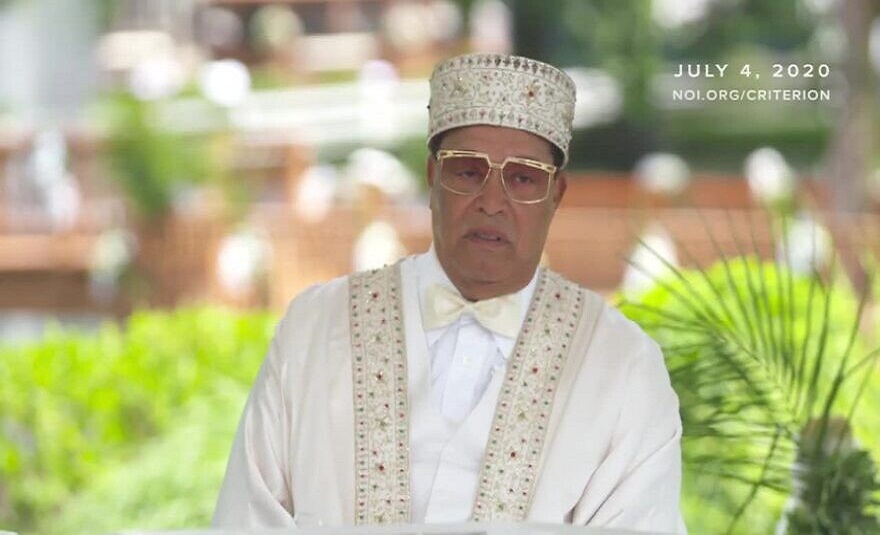 Antisemitism has stained the speeches and statements of Nation of Islam (NOI) leader Louis Farrakhan for decades. This past July 4 was no different, as Farrakhan delivered an address replete with antisemitic lies and stereotypes, and calls for his listeners to speak out against Jews.

His speech reverberated in the ensuing days among celebrities and garnered over a million views on social media. Louis Farrakhan may be the most popular antisemite in America, as his messages that espouse hate and division have been given a pass in mainstream society.

During his July 4 address, Farrakhan repeated the false claim that Jews are enjoined by their religion to poison prophets and that Jews had “broken their covenant relationship with God.” He referred to Jews collectively as “Satan” and the “enemy of God,” and claimed that white people “are born with lie [sic] and murder in their nature.” He encouraged listeners to “fight Satan the arch deceiver [and] the imposter Jews who are worthy of the chastisement of God.”

Farrakhan’s speech has been viewed over 1.2 million times (as of July 15) on numerous YouTube channels. One of the YouTube channels that live streamed the event was Revolt TV, a digital cable Network founded by Sean “P Diddy” Combs. (The video has since been removed.)

Combs, like other musicians, athletes and celebrities, continues to lend Farrakhan a measure of legitimacy by amplifying and supporting his well-established record of antisemitism and hate. According to the Nation of Islam newspaper The Final Call, several celebrities attended Farrakhan’s July 4 event, including Nick Cannon, Stephen Jackson, TI, 2Chainz, Rick Ross, Jay Electronica, Stephanie Mills and Syleena Johnson.

Indeed, several celebrities, including a few of the attendees, have since been embroiled in controversies surrounding their own expressions of antisemitism and embrace of Farrakhan:

Prior to Farrakhan’s July 4 speech, comedian and author Chelsea Handler shared a 10 minute video on Instagram of Farrakhan on The Phil Donahue Show in 1990. She wrote in her June 14 post, “I learned a lot from watching this powerful video.” Handler eventually removed the video and issued an apology. Also in June, rapper and actor Ice Cube, who has had a relationship with Louis Farrakhan and NOI dating back to the 1990s, used Twitter to elevate Farrakhan.

Farrakhan’s vitriolic antisemitism is but one part of the NOI’s larger anti-Jewish propaganda campaign. The NOI uses its programs, institutions, publications, and social media to disseminate its message of hate.

Just this past weekend, Ishmael Muhammad, who is widely considered to be Louis Farrakhan’s second-in-command, took to the podium at the Nation of Islam’s Mosque Maryam to continue promoting the antisemitic conspiracies and vitriol that Farrakhan has been espousing for decades.

In his sermon, which was streamed live on YouTube and has been viewed more than 30,000 times as of July 15, Muhammad appeared determined to sow division between Jews and African Americans. Muhammad repeated in vivid detail the antisemitic canard that Jews were responsible for the transatlantic slave trade. ‘Jewish merchants owned, insured, and financed slave ships and outfitted them with chains and shackles,’ he said. ‘Jews were the slave auctioneers, the brokers, the wholesalers keeping the slave economy oiled with money…there were rabbis who owned, rented, and sold slaves and denounced abolitionists…and they sold to plantation masters everything from slaves, to drugs, to whips, shackles, and chains.

Muhammad also took aim at the NAACP, arguing that Jews founded the organization in the early 1900s in order to undermine other African American leaders and spy on the group for the U.S. government. “You’ve always been guilty of spying on us,” Muhammad added. He also claimed that in the 1970s Jews helped “cripple Black progress in every field,” and “forced millions of Black out of employment in the skilled trades.”

Ishmael Muhammad also claimed that modern Jews are “slave masters” and “slum lords” who prey on Black people financially. Muhammad argued that Jews have “a devalued view of blacks” as well as other people of color because they “allow us to suffer.” He also repeated the antisemitic canard that Jews are responsible for “all the filth that comes out of Hollywood and perverts the minds of the American people.”

Ishmael Muhammad is considered by some to be Farrakhan’s most likely successor.