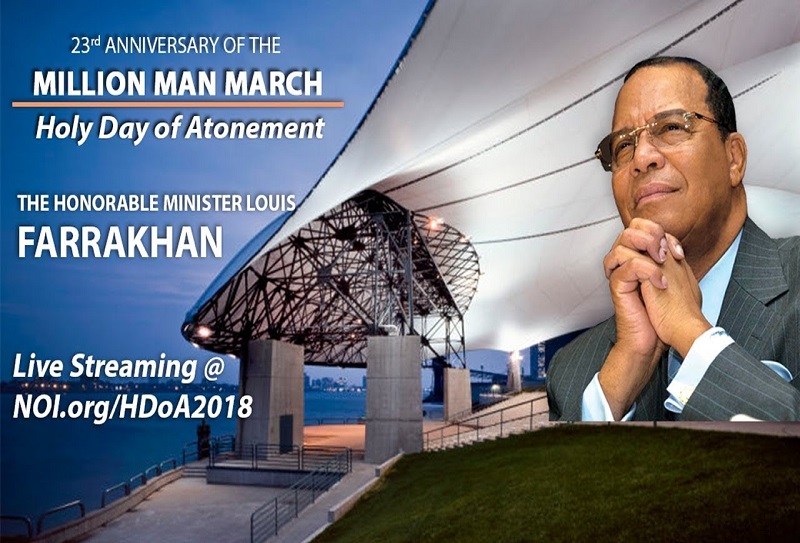 Farrakhan “thanked” the Jewish community “for putting my name all over the planet. Because of your fear of what we represent, I can go anywhere in the world and they’ve heard of Farrakhan…I’m not mad at you because you’re so stupid.”

He then claimed to not be an “anti-Semite,” but an “anti-termite,” at which the audience laughed and applauded. Farrakhan also says he is not an anti-Semite because he has never incited violence against Jews or synagogues. But his rhetoric and prejudices, which inform and influence his followers, continue to promote anti-Semitic conspiracy and hatred in this country.

Farrakhan used his speech to praise leaders of the Women’s March who have embraced him publicly: “That beautiful black sister who started the #MeToo movement, one of our sisters. Beautiful black woman. In the March that the women had after the Trump victory, our sister Tamika [Mallory], Carmen Perez, Linda Sarsour, strong women. All of a sudden, some Jewish women, you want to lambaste them because they came to hear Farrakhan.”

The speech also highlighted Farrakhan’s anti-white animus and homophobia. “He came to save us from the sins of white people that have been imposed on us since we have been under their rule,” he told the audience. “We didn't have homosexuality in Africa, that's not our tradition. To my homosexual brothers and sisters that are in the audience, I want you to know from your brother that I love you and we are not here to judge you. The God that I represent didn't come to North America ignorant of what white folk had imposed on us, to judge us and destroy us for our sinful behavior. You a liar? Yes. Well, you were taught by a master liar. You a fornicator? You a pimp? You see what they've done to us as a people? You didn't start pimping; they were pimping. They were hustling our women. They're the masters of the sex trafficking trade.”

Prior to Farrakhan’s hours-long speech, other guests gave remarks, including local civic leaders Ralph Godbee, the chief of police for Detroit Public Schools, and Stephen Grady, Chief of Staff to Brenda Jones, the president of the Detroit City Council. Grady’s current Facebook cover photo is a photo of himself and Farrakhan with a caption promoting the October 14th event.

During the fundraising portion of the event, NOI announced a $100 pledge from Marcus Muhammad, the mayor of Benton Harbor, Michigan.