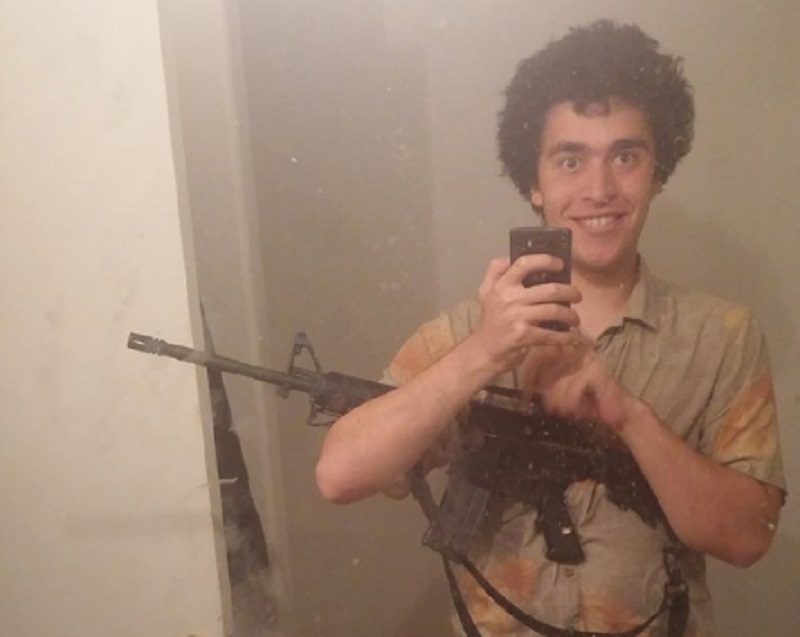 Update: On January 14, 2020, Conor Climo entered a plea agreement to weapons charges for possession of an unregistered firearm with the court. He faces a sentence from 2 years to 30 months.  Conor Climo appeared in court on February 10, 2020, to plead guilty to the charges.

On August 8, 2019, the FBI arrested Conor Climo, a Las Vegas-based security guard, on weapons charges for possession of an unregistered firearm. According to analysis by ADL’s Center on Extremism (COE), Climo, apparently using a variety of aliases, was actively engaged online for several years with other white supremacists, moving between Daily Stormer community boards, Discord servers and encrypted Wire chats.

In June 2019, the COE provided law enforcement officials familiar with the case with warnings about Climo’s online threats against synagogues, and information about the neo-Nazi Feuerkrieg Division, an offshoot of one of the most extreme white supremacist groups, Atomwaffen Division, which has been implicated in five murders nationwide.

Climo was arraigned on allegations that he had bomb-making materials in his home and had plotted to attack Jews and members of the LGBTQ community. According to the FBI’s criminal complaint, Climo expressed homophobic, racist and anti-Semitic views during online conversations with an undercover FBI agent. He also discussed attacking various targets in the Las Vegas area, including a Messianic Congregation, the ADL regional office, and a bar he believed catered to the LGBTQ community. Climo allegedly surveilled potential targets, researched local synagogue and mosque locations and planned escape routes. He also reportedly fantasized about mobilizing an eight-man sniper platoon for a shooting attack targeting Jews, using a Molotov cocktail to set fire to a synagogue and his failed attempts to recruit a homeless person to conduct reconnaissance prior to the attack. 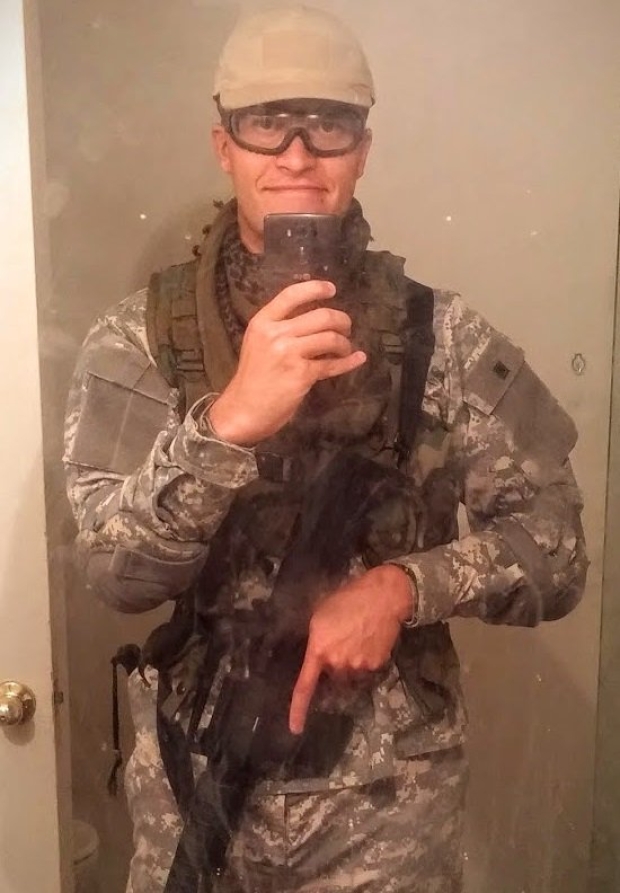 While executing a federal search warrant at Climo’s home, the complaint states, the FBI agents and technicians found materials, schematics and components consistent with those needed to build homemade explosive devices. They also found a journal in Climo’s room which included a sketch outlining how two infantry teams might conduct a bar attack.

In September 2016, Climo made the Las Vegas local news after conducting solo armed neighborhood patrols in the Centennial Hills suburb of Nevada, ostensibly to “reduce crime.” Decked out in a vest full of magazines and armed with an AR-rifle, what he referred to as his “handy dandy knife” and 120 rounds of ammunition, he told the reporter he was looking for “suspicious activity.”  Although neighbors expressed concern, Nevada is an open-carry weapon state and Climo broke no apparent laws at the time. Climo abandoned the patrols shortly after the broadcast.

ADL’s COE analysis indicates that Climo, using the screen name “Berserker 1488,” began posting in 2016 on a forum for the neo-Nazi site Daily Stormer. He seemingly used the account to accuse his father of neglect and his mother of abuse; his comments in online chats indicate he viewed the latter as justification for violence against women. Berserker 1488 also adopted the white supremacist belief that Jews have injected deviant values, including feminism, into society. In November 2016, he wrote, “I HATE how women went from their traditional role to becoming these psychopathic bitches who feels as if they OWN the fucking place!... FUCK (((WOMEN’S LIBERATION)))! MORE LIKE FUCKING (((JEWRY LIBERATION)))! :angry: [sic].”  Note his use of the echo, an online typographical reference used by some anti-Semites to signify a Jew or Jewish influence.

He continued later in the same chat, “I prefer Shock Collars…to reinforce into them about their place…“Yea and I’m more in favor of disciplining Women like one would do Children (having them do push ups and go into “time outs” only for grown people) BUT if it has to come to it THEN shooting a woman SHOULD be necessary.”

In the same forum, in another November 2016 post, Berserker 1488 (purportedly Climo) writes in response to a comment about domestication of wild animals, “Now if we could find a way to do so w/ The Africans and Muzzies [Muslims]…”.  Of the homeless population, he writes, “Honestly fam the Homeless fucks in Vegas need to be G A S S E D… I have to deal w/ those fucks everyday as a Security Officer. Pisses me off not only just seeing these crazy shits but also having to smell them as well.”

Climo’s online presence is characterized by a celebration of violence, and he preaches the core white supremacist principles of accelerationism, a nihilistic philosophy that advocates direct action against the system to hasten society’s downfall.

In response to username Nationalist4Liberty’s post, “I dont [sic] advocate violence but a very small but smart group could get a lot done,” Berserker1488 quotes Thomas Jefferson, writing, “The Tree of Liberty needs to be refreshed with the blood of Tyrants and Patriots,” adding, “I’m very willing to join such an effort myself but we’d have to be clandestine in the matter.” The Jefferson quote is a favorite among right-wing extremists, particularly anti-government extremists.

In April 2017, B1488 (a shortened version of Berserker 1488), who is allegedly Climo, based on his self-identification as a 21-year-old Las Vegas security guard, among other identifiers analyzed by the COE, began posting on the Traditionalist Worker Party Discord server, “Tradworker.” In more than 2,700 posts, a picture emerges of an eager young white supremacist, obsessed with anti-Semitic conspiracies and spewing misogynistic and homophobic sentiment.

And in November 2018, on another leaked Discord chat log, this time for the National Socialist Legion (NSL), a small Tennessee-based neo-Nazi group, a person using the screen name CC96 (believed to be Climo; the name uses Conor Climo’s initials and his year of birth) made 450 posts on a range of topics including “news and Jews,” “guns and gear,” and “activism.”

In July 2018, CC96 writes on the NSL Discord server, “I will get a screenshot of an ADL Chapter Building in my area.” Six days later, he posted, “Fuck The Kiked Laws. Oh I know where an ADL Office is in Vegas and I know it is surrounded by Lawyer firms.”

Throughout the NSL chats, CC96 brags about his newly acquired weapons, posts images of his sword in “guns and gear,” bemoans the racial make-up of Las Vegas, zeroing in on African-Americans and Latinos, whom he refers to using derogatory language. Finally, he praises Charleston shooter Dylann Roof with a white supremacist catch phrase, “St. Roof did nothing wrong.”

According to law enforcement, Climo was closely associated with Feuerkrieg Division at the time of his arrest.

An offshoot of Atomwaffen, Feuerkrieg Division is an international neo-Nazi organization with a presence in several states in the U.S.  Feuerkrieg adherents want to translate the concepts promoted in Siege, a collection of essays written by neo-Nazi James Mason, into an all-encompassing world view.  Adherents embrace the notion of “Siegeculture,” a philosophy, political orientation, spiritual outlook and solution to societal problems, dominated by hate and an embrace of violence anchored in fascist ideology.

One of Feuerkrieg Division’s stated goals is creating a whites only ethno-state and being able to survive off the land.  They preach self-sufficiency in preparation for a perceived societal collapse, and users often discuss plans to acquire illegal weapons, illegally modify weapons and manufacture explosives and ammunition.

Climo seems to have been influenced by this white supremacist subculture; in a 2018 post on the NSL Discord Server, user CC96 wrote, "Rrrrrreeeeaaad Siiieeeege Me Mateys!"