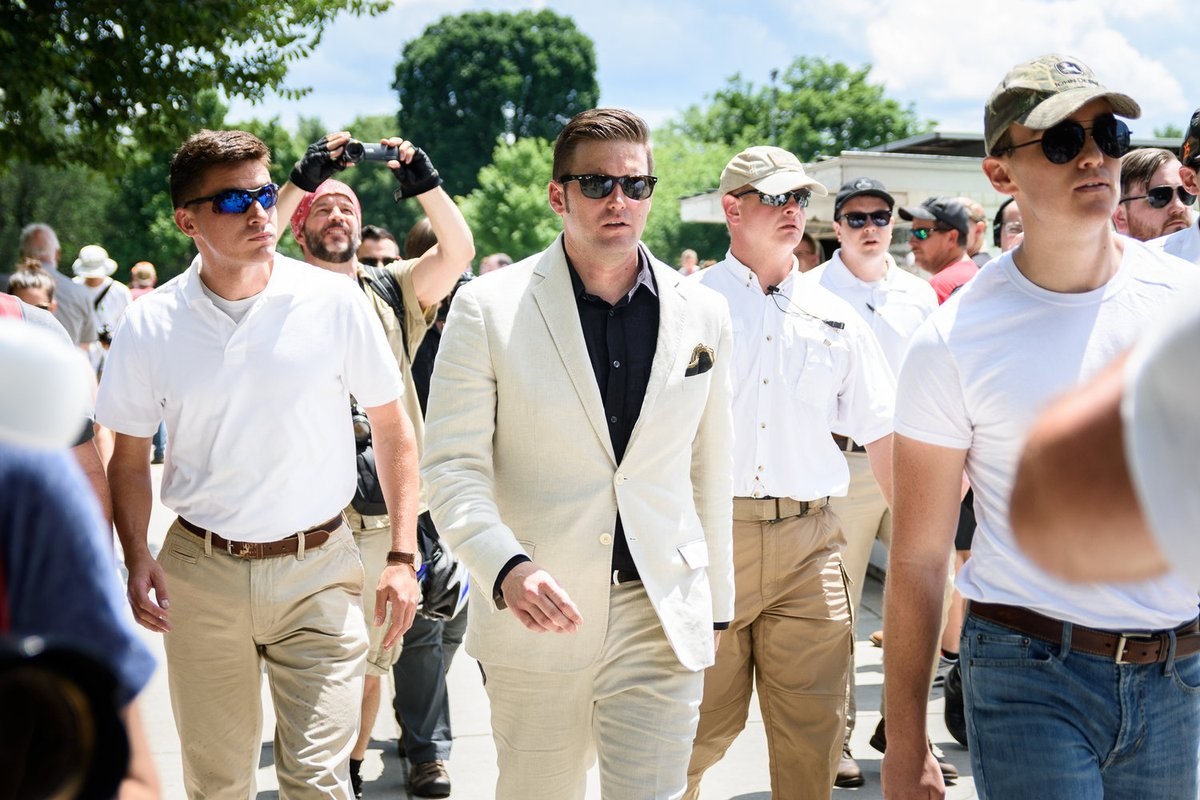 The Term “Alt Right” Is Here to Stay

The “rally for free speech,” held near the Lincoln Memorial, featured a number of white supremacist speakers, including Richard Spencer and Nathan Damigo, while the “rally against political violence,” held near the White House, focused on vilifying the left. Some of the speakers involved in the rally near the White House were originally scheduled to speak at the free speech rally, but reconsidered after learning that racists and anti-Semites would be allowed to voice their views.

Right-wing extremist rallies, particularly those featuring white supremacists, are rare occurrences in D.C., but white supremacists appear to be feeling emboldened by President Trump’s victory last November. Turnout was low at both rallies, with about 100 people at the free speech rally and a smaller number at the rally against political violence.

Members of the Proud Boys were present at both rallies; one of its members, Colton Merwin, even planned the free speech event. The Proud Boys are right-wing, self-proclaimed defenders of “Western values,” who stand on the dividing line between right-wing activists and white supremacists. Their enemies include the left (especially anti-fascist activists) and political correctness. Another Proud Boy, Augustus Invictus, spoke at the free speech rally and announced that while he was not a white nationalist, he understood that a broad coalition on the right had to be willing to unite in order to effectively fight against the left.

The "Freedom of Speech" Rally

The "free speech rally" attracted a number of right-wing activists, some of whom had worked on the Trump campaign, who said they were there to defend free speech even if they disagreed with certain views celebrated at the rally. But the loudest, most amplified voice of the day belonged to the white supremacists. People held up flags from Identity Evropa and Vanguard America, two of the racist groups responsible for many of the white supremacist fliers that appeared at campuses across the country this year.

A number of the speakers promoted the importance of preserving the United States as a white country. Others blamed Jewish influence for the problems in the country and for whites losing their place in America.

Jason Kessler, a white nationalist who has been active in protesting the removal of Confederate monuments in Charlottesville, Virginia, argued that people get upset when Jews are criticized but that “they are a powerful group.” He claimed that while Jews make up only about 2 percent of the U.S. population, they still have AIPAC, a major pro-Israel lobbying group, they run Hollywood and brag about it, and they put out “filthy propaganda.” He also demanded, “All you guys out here tell me who is in charge of the global conglomerates that own you, that own CBS and NBC?”

Mike Enoch, aka Mike Penovich, who runs “The Right Stuff,” an anti-Semitic alt-right website, made a speech disparaging Jews. After starting his speech by declaring that “what’s really facing our country today is the systemic elimination of white people,” he went on to claim that “Jewish privilege” meant that Jews controlled the media, the Federal Reserve Bank and policy. He asked, “Why do we go to war in the Middle East against our country’s interests, against the interest of our race? It’s because of Jewish control.”

Christopher Cantwell, who operates “Radical Agenda,” an Internet radio show/blog, has recently moved toward the extreme right, and spoke at a neo-Nazi rally in Pikeville, Kentucky in May. At the D.C. rally, he declared, “We are losing massive ground each moment. Non-white immigration is rapidly diminishing what electoral majorities we have remaining. Jewish influence disarms us in the last onslaught of identity politics.”

Tim “Treadstone” Gionet, otherwise known as “Baked Alaska,” is a former editor at Buzzfeed who has recently espoused white supremacist and anti-Semitic ideologies. He declared that he should be allowed to criticize any religion, including Judaism, and not be called an anti-Semite. He was recently banned from Twitter for a week for circulating a meme that featured Jewish right-wing activist Laura Loomer being sent to a gas chamber.

Richard Spencer, the keynote speaker and leader of the alt right, and Nathan Damigo, the founder of Identity Evropa, did not focus on Jews, but both talked about preserving white identity in America. Damigo said that America was founded by white people for white people and was not founded to be a multiracial or multicultural society.

Spencer said that the most radical thing that white people can say is, “I am white, my life has meaning, my life has dignity, I am part of a family, I will fight for my children’s future.” He declared that whites were fighting hopelessness and weakness and that the alt-right was an answer to that. During Spencer’s speech, Identity Evropa members unfurled a banner that said, “No longer silent. We will be heard.”

The "Rally Against Political Violence"

The rally near the White House featured markedly different themes, as well as speakers who tend to identify as conservatives, albeit a new breed of conservative. They are younger and more prolific, and are skilled at disseminating their message through online publications like the Gateway Pundit, a blog run by Lucian Wintrich, who was one of the rally’s speakers.

Many at the rally against political violence share the alt-right’s views on immigration, globalism and feminism, but they are not white supremacists. They have been called the “alt-lite.” The speakers did not focus on white nationalism or Jews, but turned their wrath on the left, liberals and Democrats. The emcee was Jack Posobiec, who was originally scheduled to speak at the free speech rally, but bowed out when he learned that Spencer would also be speaking. In response, Spencer has attacked Posobiec on social media for his refusal to appear alongside white supremacist speakers.

Speaker after speaker assailed the left and accused its members of violently suppressing conservative views. One speaker, Alicia Powe, who works for World Net Daily, a right-wing online publication, asserted that everyone should call liberals what they are: Communists, racists and oppressors. She added that inside every leftist is a totalitarian screaming to get out.

The rally also included Pax Hart, who was one of the organizers of the National March Against Sharia, a series of anti-Muslim events that were planned by the extremist group ACT for America. Hart claimed that the left violently tried to shut down the marches, and argued that the left that created an environment where they feel justified in carrying out violence against conservatives.

Kyle Prescott, a leader in the Proud Boys, declared that right-wing violence is miniscule compared to the hate and vitriol espoused by the left. He referred to the left as Hollywood liberals, race baiters and university SJWs (or “social justice warriors,” one of the right’s most frequently-deployed insults). He declared that the right would fight back against violence on the left.

Stewart Rhodes, the head of the Oath Keepers, an anti-government extremist group that advocates for unfettered gun ownership, suggested that everyone should be armed. He told the crowd that the Oath Keepers are showing up at rallies to protect that right because police stood down when left-wing protestors got violent in places like Berkeley, California.