Following Start of Mideast Violence, Antisemitic Incidents More Than Double in May 2021 vs May 2020 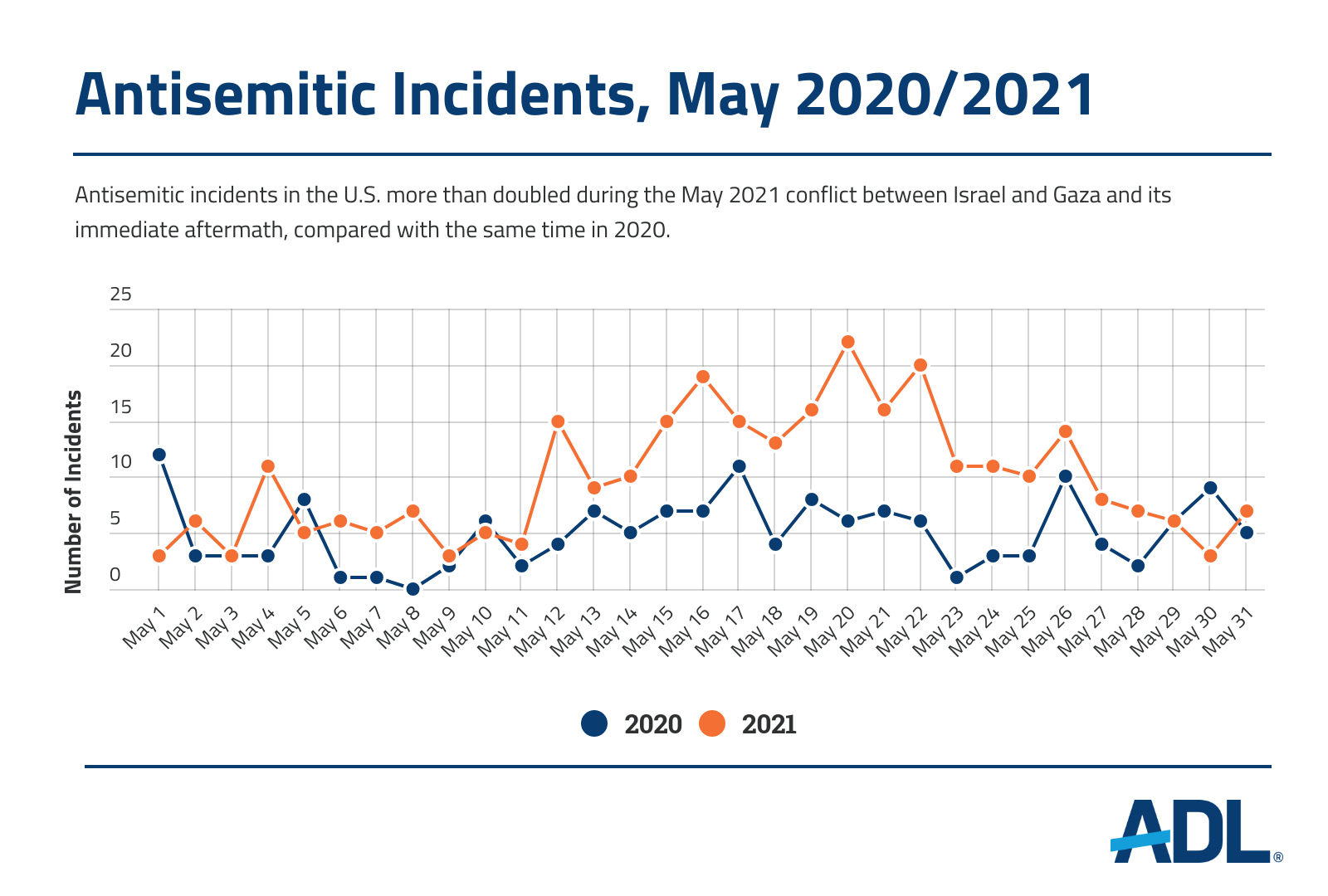 New analysis from ADL’s Center on Extremism reveals that antisemitic incidents in the U.S. more than doubled during the May 2021 military conflict between Israel and Hamas and its immediate aftermath compared to the same time period in 2020.  After peaking between May 20-22, 2021, incident levels have gradually returned to a baseline level. These numbers should still be considered preliminary and are likely to change as additional information becomes available.

Incidents began a steep upward climb on May 11 as military operations intensified between Israel and Hamas. ADL logged 251 incidents from May 11 -- the official start of military action -- through the end of the month, an increase of 115% over the same period in 2020, when 117 incidents were recorded. We tallied 305 incidents in the entire month of May 2021. And while the violence between Israel and Hamas animated many of these incidents, it does not account for the full increase; when incidents that include explicit references to Israel or Zionism are excluded, the number still increased by 15% in the 20-day period of May 2021 compared to the same time period in May 2020.

ADL classifies incidents in the three broad categories of harassment, vandalism, and assault. From May 11-31, 2021, there were 190 cases of harassment, 50 cases of vandalism and 11 assaults. Forty-seven percent of the incidents (118 in total) included explicit references to Israel and Zionism, as explained in detail below.

The most dramatic year-over-year increase was in the category of assault, which rose from zero in May 11-31, 2020, to 11 in the same period in May 2021. There is evidence that at least seven of the antisemitic assaults were motivated by anger over the conflict in the Middle East.  For example, on May 18, diners at a Los Angeles restaurant were attacked by individuals in cars carrying Palestinian flags who, said, “You should be ashamed of yourselves” after the diners confirmed that they were Jewish. Some news reports indicated that the attackers used anti-Jewish slurs. On May 22 in Manhattan, a Jewish man wearing a Star of David necklace was punched by a man who allegedly asked him, “What is that around your neck, does that make you a fucking Zionist?" And on May 24 a Jewish man in Las Vegas was assaulted by a stranger who said that Jews are “baby killers” who “are not going to exist” after they had a conversation about the Israel-Hamas conflict.

Harassment also dramatically increased, from 69 incidents from May 11-31, 2020, to 190 during those dates in May 2021. More than 100 of the 2021 harassment cases included references to Israel or Zionism. In some cases, Jewish individuals were accosted with hostile questions or comments. For example, on May 13 in New Orleans, a Jewish high school student wearing a yarmulke was harassed by another student who was advocating for Palestinian rights and told him to "take his dirty Jew hat off."  In other cases, anti-Israel rallies or protests appear to have been purposely held in the immediate vicinity of Jewish religious institutions. ADL classifies such incidents as antisemitic incidents in part because the choice of locale has the intention or impact of holding all Jews responsible for Israeli actions and intimidates the Jewish community from participating in Jewish religious life.

Most of the 400+ anti-Israel rallies that took place between May 11 and May 31 were not characterized by antisemitism and thus are not included in these figures. However, there were noteworthy cases where antisemitism was expressed at anti-Israel rallies. During a May 15 rally in Washington, D.C., marchers chanted in Arabic, “Oh, Khaybar, Khaybar, oh you Jews, the army of Muhammad shall return.” The chant refers to the siege and subjugation of Jews of the town of Khaybar by the Prophet Muhammad and his army, and is an implicit threat towards Jews today. On May 22 during a rally in Philadelphia, a demonstrator was heard declaring, "Israel controls the media," a claim which is animated by and reinforces the antisemitic trope that Jews control the media.

Some rallies also featured attempts to foment anti-Zionist sentiment in a manner that could fairly be considered an attack on the large percentage of American Jews who view a relationship with Israel to be an important part of their religious, cultural or social identities.  A protestor at a May 12 rally in Chicago held a sign that featured a swastika drawn inside of a Jewish Star of David, with an accompanying message referencing “Nazi Zionist Jews.” Meanwhile, a speaker at a May 8 rally in Washington, D.C. said that Zionists are like “terrorists [who] operate under the guise of Judaism. They’re not Jewish.” This and similar rhetoric can be intimidating to American Jews, a majority of whom identify a relationship with Israel as an important part of their Jewish identities.

More information on ADL methodology for tabulating antisemitic incidents may be found here.