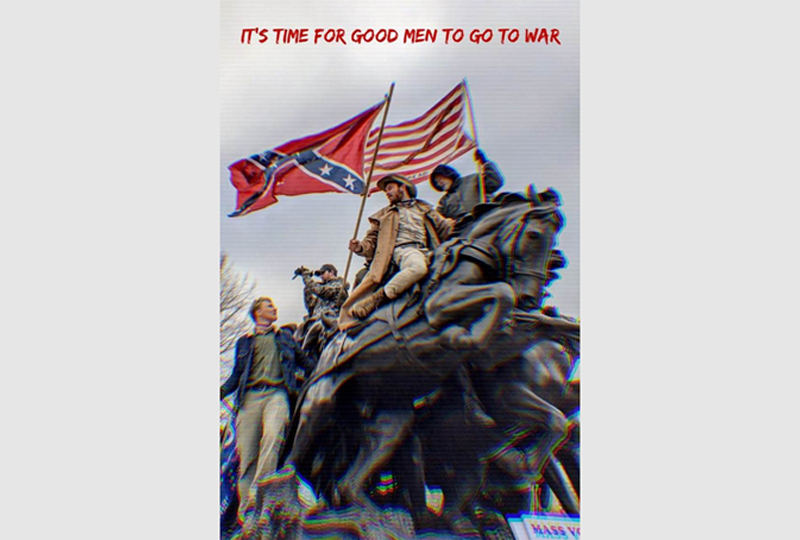 In the immediate aftermath of the November 2020 presidential election, pro-Trump and other extremists announced their initial plans to protest President-Elect Joe Biden’s inauguration in Washington D.C. Those calls for largescale protests on or around January 20 attracted renewed interest following the January 6 attack on the U.S. Capitol, with threats of additional extremist violence circulating on numerous online platforms.

While it is impossible for anyone to predict with certainty how the events of the next week may unfold, recent history has shown that we cannot ignore potential threats from political and other right-wing extremists.

January 17: Called off, or Recalibrated?

There is increased online chatter about nationwide armed protests between January 16 and 20, and in Washington D.C. starting on the 17th and running through Inauguration Day.

This threat is largely traceable to antigovernment boogalooers, who were planning a January 17 march in D.C. to support gun rights and protest government overreach. That event, under the names “Tree of Liberty” and “Refuse to be Silenced,” was cancelled in the wake of the January 6 violence. Protests at state capitols were likewise announced for January 17, and while these events were not explicitly cancelled, there is little online evidence of organized planning. 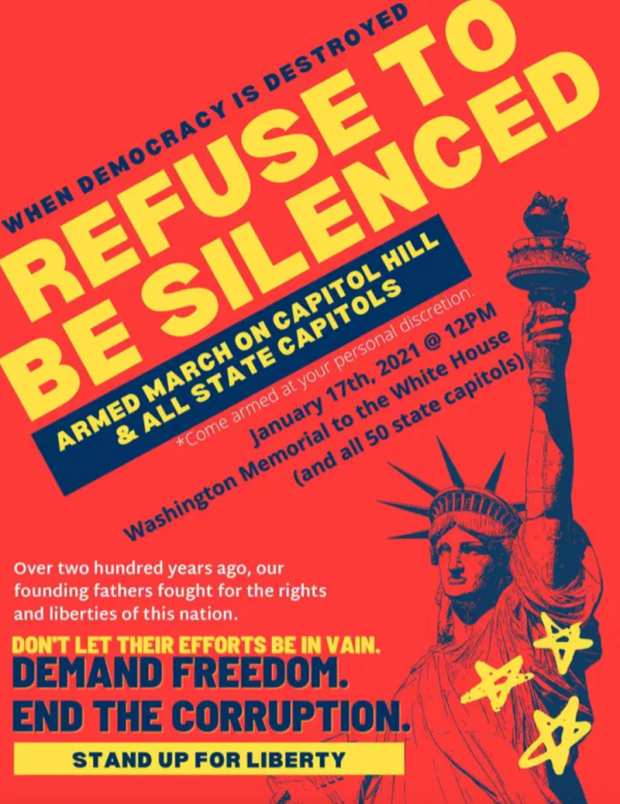 The relatively muted leadup to these events does not necessarily mean they will be small. For one, there are several more formal boogaloo cells located across the country and they may be using encrypted messaging services to communicate privately. Secondly the fact that the protests are happening in state capitals across the country and not in a centralized location means there is less coordination needed to secure rides or lodging.

The wild card here is that a flier advertising the January 17 boogaloo event has been shared widely online and has the potential to attract non-boogaloo adherents. Ironically, given boogalooers’ profound distaste for President Trump, and their disinterest in the election outcome, their state rallies may end up providing a gathering point for energized pro-Trump extremists eager for another opportunity to rail against the democratic process.

A January 12 post on social media platform MeWe underlined the right’s perennial fears of antifa and the left, claiming all upcoming events are an “antifa false flag” entrapment effort, and “patriots” should stay home. 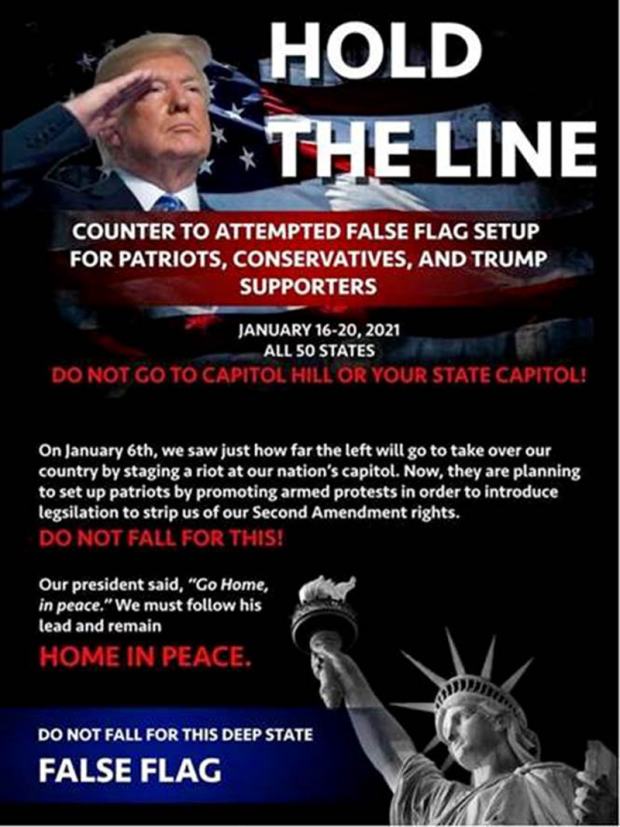 Posts advertising an Inauguration Day “Million Militia March” first appeared on “free speech” social media platform Wimkin just after the election. One of the earliest posts, from November 29, 2020, announced, “Millions of American Militia will meet in Washington, D.C. on January 20, 2021 for the purpose of preventing any attempt by the treasonous domestic enemy Joe Biden, or any other member of the Communist Organized Crime Organization known as The Democratic Party, from entering the White House belonging to We The People.”

Longtime white supremacist Chester Doles posted at the time that his organization, American Patriots USA, was “proud to sponsor this great event.” 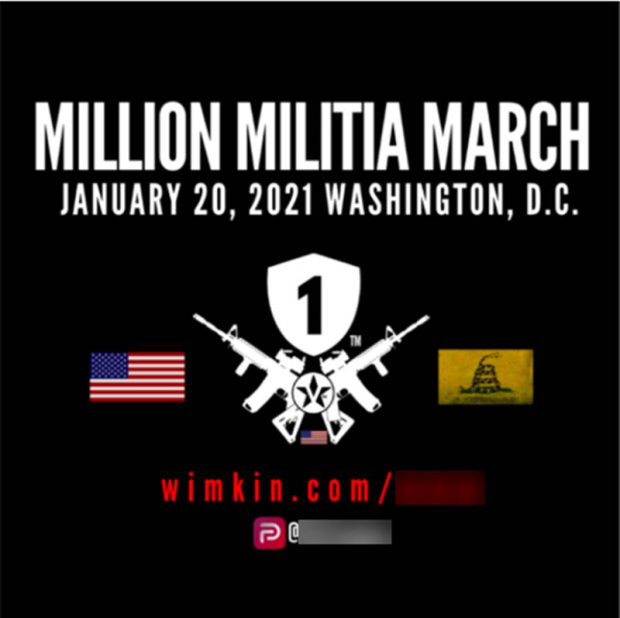 Although the original post did not appear to gain much traction, in the days after the assault on the U.S. Capitol, screenshots featuring the “Million Militia March” fliers quickly spread across other platforms, including MeWe, Minds, Parler, Reddit, Telegram, Twitter, 4chan and more. While it is unclear which groups or individuals plan to attend the proposed march, the event has gained the attention of a range of pro-Trump and other extremists beyond the militia movement.

A proposed “Million Martyr March” would honor Ashli Babbitt, the Trump supporter who was shot while participating in the January 6 insurrection. One 4chan user urged others to join the planned march, writing, “they cannot kill unarmed Americans and not be held accountable…On January 20th we need to be seen. We will not stop talking about this…If Ashley [sic] Babbitt isn't proof our government is illegitimate I don't know what is.” Another user wrote that the event would take place at 2 PM on Inauguration Day, with participants marching from the Lincoln Memorial to the U.S. Capitol. 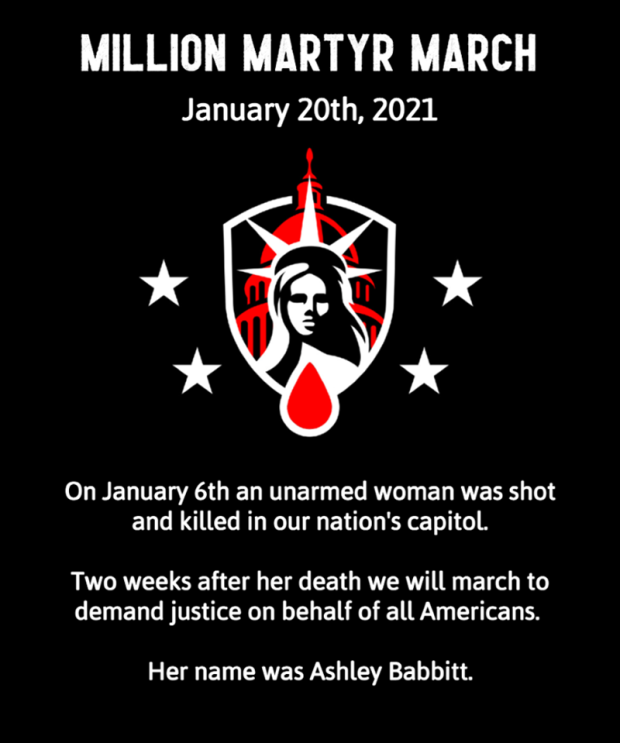 In addition to specific events like the “Million Militia March” or “Million Martyr March,” general calls for violence on Inauguration Day have proliferated online since the Capitol attack. A Parler post from a popular QAnon supporter went viral across platforms, announcing, “Many of Us will return on January 19, 2021, carrying Our weapons, in support of Our nation's resolve, to which [sic] the world will never forget!!! We will come in numbers that no standing army or police agency can match.”

Couy Griffin, a county commissioner in New Mexico and founder of “Cowboys for Trump,” vowed to return to Washington D.C. after the Capitol riot and told his approximately 170K Facebook followers, “keep your powder dry, keep your head on a swivel, and mark January 20th down in your books, because we might have another rally…Let’s get behind this momentum. We can’t stop now.” 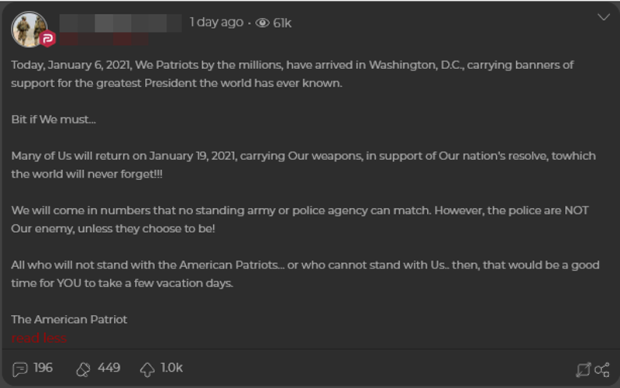 On thedonald.win, a site that describes itself as “a never-ending rally dedicated” to President Trump, several posters suggested that the violence on January 6 was only a preview of what pro-Trump extremists would unleash on the country on Inauguration Day. Commenters openly called for more violence: “Trump WILL be sworn in for a second term on January 20th…Even if we have to burn DC to the ground”; “Round 2 on January 20th. This time no mercy. I don’t even care about keeping Trump in power. I care about war,” and “if they think today was bad – wait for Inauguration Day. Should be quite the shitshow.” On 4chan, one user wrote, “I’ve already booked a hotel hoping it ends up just [like] today,” while another posted, “I’m going, and I’ll be armed this time.”

In November, Proud Boys leader Enrique Tarrio announced that “we will keep protesting…the best way to kick off [Biden’s] Presidency is to take over his inauguration. We need a sea of red hats. And we start that Biden Presidency off with a revolution.” Specific plans to disrupt the inauguration, however, have not yet emerged on Proud Boys channels. Some extremists, particularly accelerationists, are encouraging violence on January 20 outside of Washington DC, hoping to catch law enforcement off guard while resources are focused on the nation’s capital. So far, these posts have not indicated specific plans for violence.

Despite the widespread calls for violence, a growing number of social media users are cautioning fellow Trump supporters against joining the proposed marches or any other planned events on January 20. These users describe the protests as “false flag” events designed by “the left” or the government to entrap Trump supporters and seize people’s guns. Some of these posts cite the debunked conspiracy theory that antifa infiltrated the U.S. Capitol insurrection and perpetrated violence in order to frame Trump supporters.