Gab Was Down For a Week, Forcing Extremists to Consider Their Alternatives 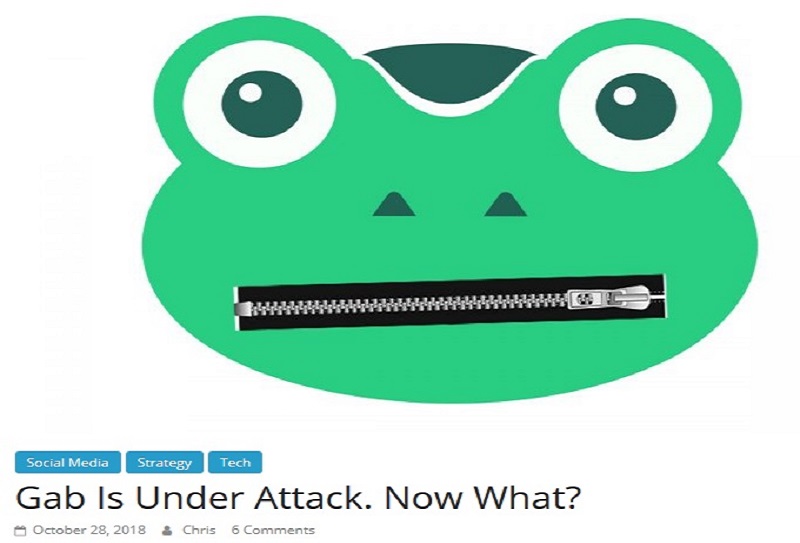 UPDATE: On November 3, one week after the massacre at Pittsburgh’s Tree of Life synagogue and six days after going dark, Gab found a new home at Epik.com. In a statement, Epik’s CEO, Robert W. Monster, explained his willingness to host Gab, writing, “De-platforming a haven of free speech is not about left or right.” He also quoted Edmund Burke’s famous warning, “Those who don't know history are doomed to repeat it,” superimposed over a photo of newly liberated prisoners at the Ebensee concentration camp.

Like so many other extremists, the alleged Pittsburgh synagogue shooter, Robert Gregory Bowers, apparently maintained a vile, hate-filled profile on the social media site Gab.com.  In the hours and days after the massacre, as Gab was repeatedly cited in the media as a gathering place for white supremacists, a shutdown appeared imminent.

On Sunday, the site’s chief technology officer, Ekrem Büyükkaya, stepped down, writing: “The attacks from the American press have been relentless for two years now and have taken a toll on me personally. I wish Gab nothing but the best and will do everything I can to help them transition to a new CTO.” That evening, roughly 36 hours after the deadly shooting, visitors to the site were met with the following, defiant message:

"Gab.com is under attack. We have been systematically no-platformed by App Stores, multiple hosting providers, and several payment processors. We have been smeared by the mainstream media for defending free expression and individual liberty for all people and for working with law enforcement to ensure that justice is served for the horrible atrocity committed in Pittsburgh. Gab will continue to fight for the fundamental human right to speak freely. As we transition to a new hosting provider Gab will be inaccessible for a period of time. We are working around the clock to get Gab.com back online. Thank you and remember to speak freely."

In the hours before the site’s closure, conversations revolved around where to go next.   Ironically, Gab’s popularity with white supremacists emerged in large part out of Twitter’s 2016 “purge” of problematic and offensive accounts.  Needless to say, Twitter would not be an option.   Several alternative social networks were suggested, including toko.tech, MeWe, and freezoxee, but the two front-runners appeared to be WrongThink and Minds.com.

Using the tag line “Because Free Speech,” WrongThink is popular with right-wing posters and promotes itself as “an alternative social network for the people, by the people that actually respect your Freedom of Speech.” Minds.com claims to be an “open source and decentralized social network for Internet freedom” where members can “earn crypto [currencies] for your contributions to the network.”

Around the same time Gab shut down, visitors to WrongThink were met with a notice that the site was temporarily down for maintenance. The timing of the shutdown provided conspiratorial fodder for the white supremacists who appeared eager to start using the site. Christopher Cantwell posted to Minds.com, crudely linking the blackout to a surge in traffic: “I guess the influx of Gab refugees hit them harder than the rape gangs hitting Europe.”

Many white supremacists, including Cantwell, responded vocally to the news that Gab would shut down.  On Saturday, October 27, Cantwell posted “Fuckin Jews got Gab …” to his Minds.com profile. And on his Wrongthink.net profile, Cantwell posted a link to his online article, “Gab Is Under Attack. Now What?” accompanied by an image of the Gab frog logo with his mouth zippered shut.

And “)))Ziogram(((“ posted that they are moving to Minds.com “if GAB gets shoa’d, that is where you can find me.” White supremacists, particularly from the alt right, often use the word “Shoah” (Hebrew for “catastrophe,” typically used as a reference for the Holocaust) to describe some sort of negative action, such as having one’s social media account being deleted, as in “I got shoah’d by Twitter.” 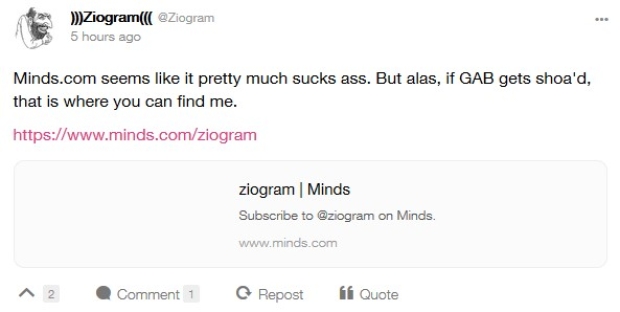 It will take some time for the dust to settle and for a new Gab to emerge, which Gab CEO Andrew Torba has vowed will happen as they search of a new hosting provider. In the meantime, white supremacists will undoubtedly find a replacement platform that allows them to spew their hateful, extremist rhetoric.