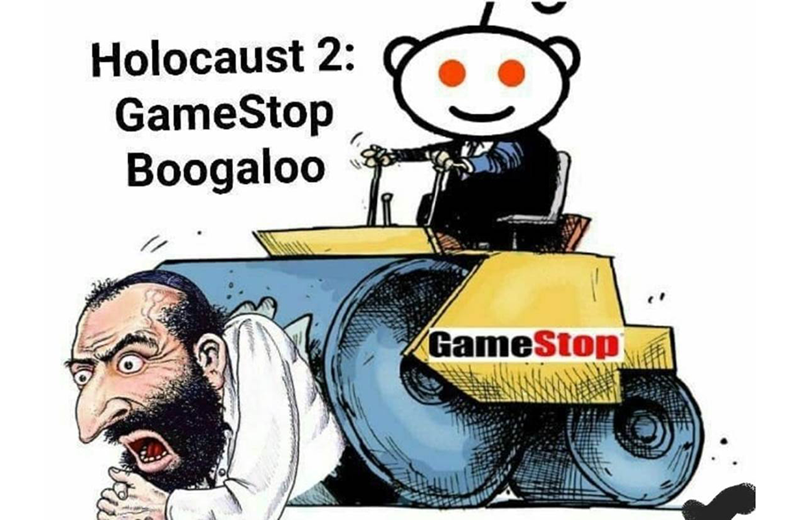 Users across social media platforms evoked antisemitism during and in the wake of the GameStop incident that took place at the end of January 2021. (photo source: Twitter)

During the final week of January 2021, beleaguered retailer GameStop’s stock was driven to astronomical new highs when posters on the r/WallStreetBets subreddit launched a buying frenzy -- ostensibly aimed at soaking the Wall Street hedge funds that had shorted the stock for profit.

As the GameStop event played out, particularly after trading was restricted by multiple brokerages, a small segment of social media users decried the role of Jews in supposedly rigging the system, echoing centuries-old antisemitic tropes about Jewish greed and Jews manipulating the global economy through control of finance, government and media.

Claims that Jews Control and Manipulate the Financial System

In the r/WallStreetBets subreddit, one user posted, “Sorry to break it to you guys but the Hunt brothers tried this and the US government literally stepped in and did a Robinhood Halt to prevent them making money. End of the day it’s the Jews that control us...” Another commented, “can I just come out and say it? Wall Street is run by the jews.”

Others in the subreddit touted the longstanding antisemitic conspiracy about the Rothschild family’s “control” of the banking system. One user wrote, “When will be the day the Headline is "Wall Street file for Bankruptcy" and finally closing their door...The Rothschild company i:e [sic] Goldman Sachs, Citigroup, JPMorgan Chase losing Trillions and the Satanic group are not happy...” Another urged fellow users, “Put Rothschild Balls in the vice with this one!!! The dirty vile cunts in the Banking Cabal must be brought down one retarded options purchase at a time!”

Across Telegram, the Happy Merchant meme featured prominently in discussions about GameStop. The popular antisemitic image depicts a Jewish man with heavily stereotyped facial features, greedily rubbing his hands together. One Telegram channel with 3.7K members posted an image that reads, in part, “by borrowing Gamestop shares from Schmuel at Goldstein Brokers Ltd. and selling them on the open market we can drive the price to zero and make it go bankrupt…GEVALT - what a plan Schlomo!!!” 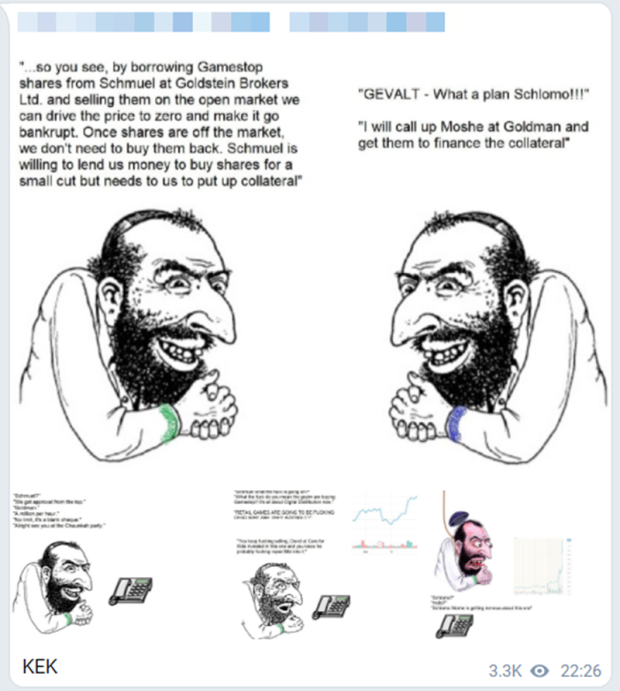 Another Telegram user reposted this tweet: “it’s so amusing that the ethnic group with a ‘high average IQ’ constantly needs new rules to keep themselves from getting out witted by a bunch of average White guys,” adding the comment “Jews seething rn.” Another user wrote, “As usual they will change rules so that retail traders lose money to the benefit of wallstreet jews, or if they can't they will get bail out.” Others also claimed that Discord banning the “WallStreetBets” server for hate speech or Google deleting reviews of the Robinhood app were examples of Jewish censorship and manipulation. “These kikes really can’t stop themselves from manipulating votes,” one channel posted.

Some Twitter users expressed similar antisemitic sentiment, alleging Jewish greed and financial control. “The market is literally Jewish hegemony operating through it a number of Jewish controlled financial organizations,” posted one user. “These people all work together talk to each other and scheme.” Another tweeted, “Wall Street vs Main Street is just code for jews stealing money from non-jews is just code for ‘jews helping others jews’…it’s not a ‘big boys club’ it’s a ‘big nosed boys club’ aka ‘jew boys club.’” A third tweeted, “This is how jews ‘succeed’: by rigging the financial system to their favour...Jews don't work, they cheat to get ahead…Jews have completely coopted the financial system and use it exclusively for their benefit while producing nothing, destroying the lives of millions of goyim in the process.”

One Twitter user used the GameStop story to justify Germany’s actions during the Holocaust while mocking and dehumanizing Jews, posting “Billionaire kike parasite Leon Cooperman fake cries because his jew brain is overloaded with the fact he might lose money that he stole. This is why Germany kicked these ‘people’ out.” Leon Cooperman is a hedge fund manager who has been extremely critical of the GameStop stock rise and the investors behind it.

Various users celebrated the market chaos for causing Jewish-run financial companies to lose money. Some users indicated that they did not mind if they personally lost money in the endeavor, as long as their actions hurt “the Jews.” In the r/WallStreetBets subreddit, one user commented, “Glad to fuck over Jews any way I can.” Another posted, “I’m holding to DEFEAT the evil Jewish people!!”

On Telegram, one channel with approximately 1.7K members posted, “...It's not about the money, forget the money. Losing the money is worth it to put the hurt on these rich jew scumbags who think they're above reproach…Hit them in the only thing they care about. The shekels.” 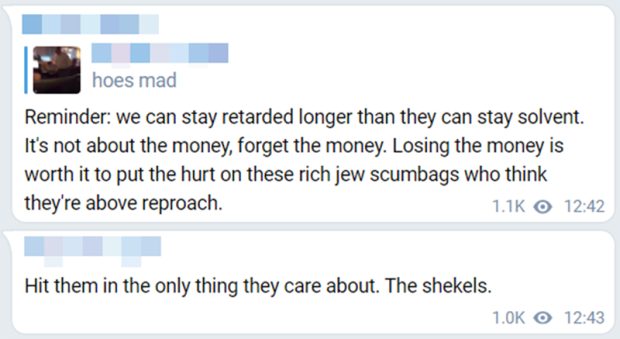 Another Telegram channel with 6.2K members encouraged followers to buy GameStop stock, writing, “THIS IS YOUR CHANCE TO FUCK THE JEWS OVER.” In other channels and groups, users posted comments like, “I'm going to buy a share of GME. I don't know how this will turn out, but fuck kikes,” and, “I'm interested in discussing messing with these Wallstreet Jews, nothing else at the moment.”

Users on other platforms similarly expressed their satisfaction at the prospect of Jews losing money. “VICTORY!! Two greedy jews lost big in the Gamestop squeeze,” wrote one Twitter user. “Tbh idc if I don’t make that much money on gme as long as that jewish Melvin fund goes bankrupt I’ll be happy lol,” posted another user. On 4chan, someone commented, “this is just the beginning of our vengeance. We’re hitting the jew where it hurts, his bank account.”

Andrew Anglin, who runs the neo-Nazi website The Daily Stormer, called the GameStop short squeeze “fantastic stuff.” “It is the epitome of the way Jews operate in Western, white countries, simply looting us all,” Anglin wrote. “Beating them at their own game like this, costing them billions of dollars,” he continued, “is one of the funniest things anyone could ever do – even if the government is just going to tax you with inflation to get them all their money back.”

An Opportunity for Radicalization

As trading was restricted and the Discord threads were shut down, some users joined Telegram channels dedicated to the GameStop incident. As they migrated to the platform, users celebrated the opportunity to radicalize newcomers into antisemitism. In a Telegram channel with 2.9K users, one poster opined that the “Reddit refugees” flocking to Telegram are “much better radicalizing stock...and the current situation is a great segway [sic] into media trickery, international finance.”

That same user encouraged others in that Telegram channel to initially moderate their content for the Reddit users, saying “(probably best to join on an inconspicuous alt and use gentle material initially rather than your GOLDBERGSTEIN SHEKELSTONE KIKE CRUSHER 1488 VWNRT main account tho, these are Redditors after all).” On Twitter, a user with more than 1,200 followers cautioned people to “never work with Jews.” 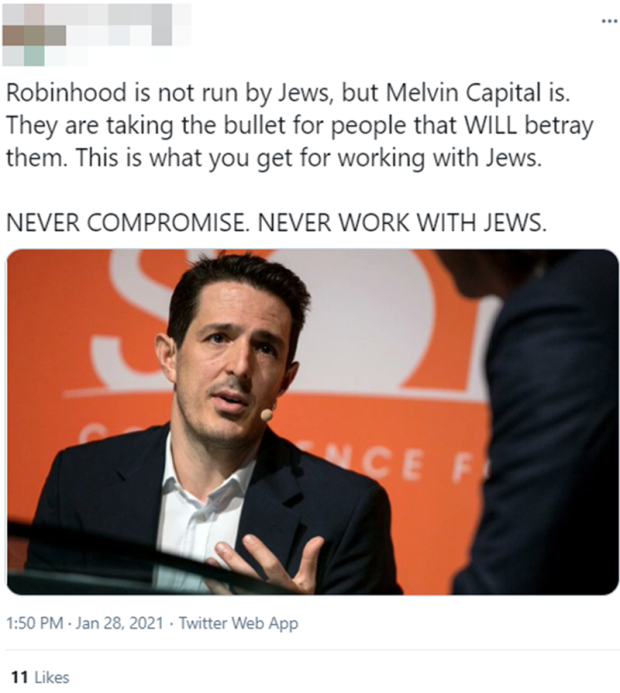 Similarly, 4chan users jumped on the opportunity to “red pill” people, viewing the incident as a “powerful moment.”